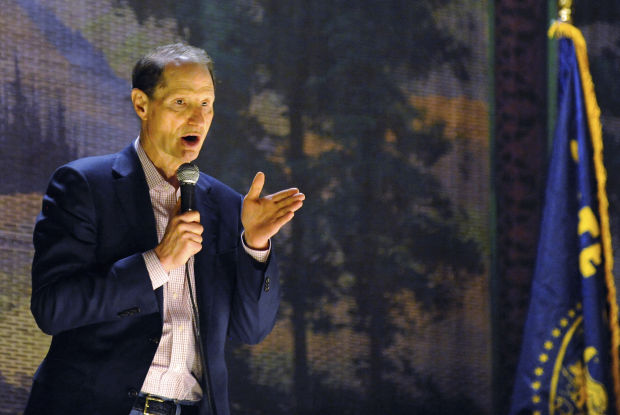 By Alysha Beck, The World July 5, 2014 Sen. Ron Wyden answers questions from the public at a town hall meeting in the Egyptian Theatre in Coos Bay Saturday afternoon. 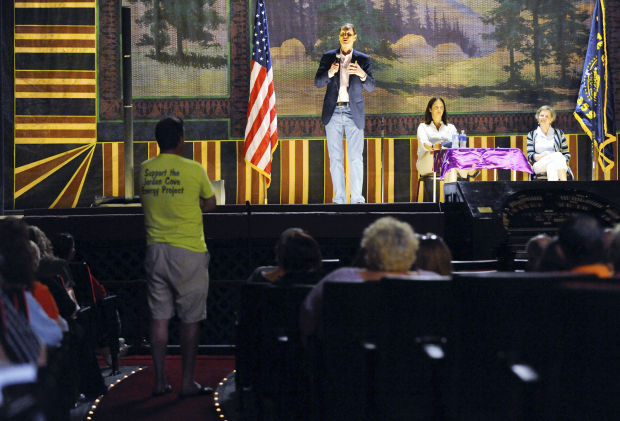 By Alysha Beck, The World July 5, 2014 Sen. Ron Wyden answers questions from the public at a town hall meeting in the Egyptian Theatre in Coos Bay Saturday afternoon.

The audience was smaller — and tamer — than the Democratic U.S. senator’s tense town hall last fall, but the focus of Saturday’s town hall at the Egyptian Theatre was the same: Jordan Cove.

“I’m leaving with a sense that the South Coast is really anxious,” Wyden told The World afterward.

“This community is going to have a chance to be part of a real debate,” he said at the end of the town hall. “My goal is to make sure when we’ve had that debate, that even those who don’t agree with the judgment will be able to say they were treated fairly.

“I want it understood that I am going to insist that the community be given answers to all legitimate questions.”

Boost Southwest Oregon co-chair Mark Wall agreed that all questions need to be “answered by people a lot smarter than us in this room.”

“I have confidence in the regulatory process that these issues will be vetted out and the project will move forward,” he said.

Not everyone shares his certainty.

The anti-LNG crowd said the regulatory process was butchered from the start.

One resident was concerned that Jordan Cove was deemed a done deal before an objective evaluation ever took place, though Wyden reassured him the regulatory process is being followed by the book.

You can’t guarantee that, said Jody McCaffree, a leader in the local anti-LNG movement.

“You want the process to be done fair, but it’s not being done fair,” she said, referring to Jordan Cove-backed economic and environmental impact studies that FERC is relying on. “They give them what they want to hear. There’s got to be another process to get the real facts out, not just what the industry wants people to hear.”

Jordan Cove officials have pledged to work with local unions to employ as many local workers as possible on the project’s construction.

“Not everyone that’s a construction worker or in the unions is for this project,” said a North Bend electrician.

He warned Wyden and the audience about “Whoops,” a nickname given to the Washington Public Power Supply System in the 1970s and 1980s. WPPSS (now Energy Northwest) overcommitted to nuclear power, causing a sudden stop on plant construction that left thousands out of work.

“The project shut down at 75 percent completion,” he said. “When the revenue and jobs left, it destroyed that area.”

He’s worried Jordan Cove will be the next “Whoops.”

“Employees would quit and go work out there,” he said. “We’d have to fold our shops up. If (Jordan Cove) lost funding, it would leave a bunch of empty places for those people to go.”

“The Local 932 is committed to responding to all calls for manpower,” he said.

Foxworthy said he recently filled a 160-man, four-day job “without problems,” even though the Local 932 has 140 members.

Wyden conceded that other big projects have been “ballyhooed” as the South Coast’s savior from economic depression. The cheering has turned into shrugs nearly every time, which has “left people on the South Coast skeptical,” he said.

“Oregonians, especially folks on the South Coast, deserve to have this done right,” Wyden said of Jordan Cove.

Join now & SAVE on your first 3 months!