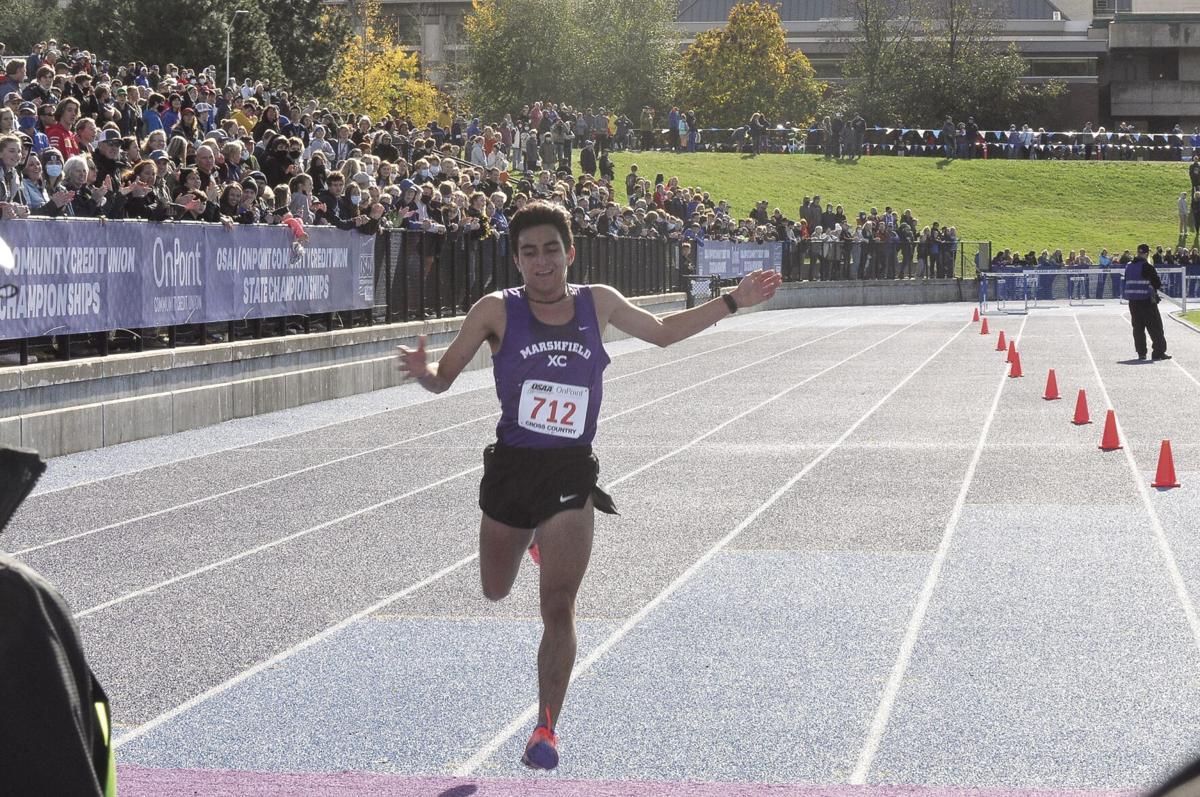 Marshfield’s Alex Garcia-Silver crosses the finish line to become a state champion for Marshfield on Saturday in the Class 4A boys race. 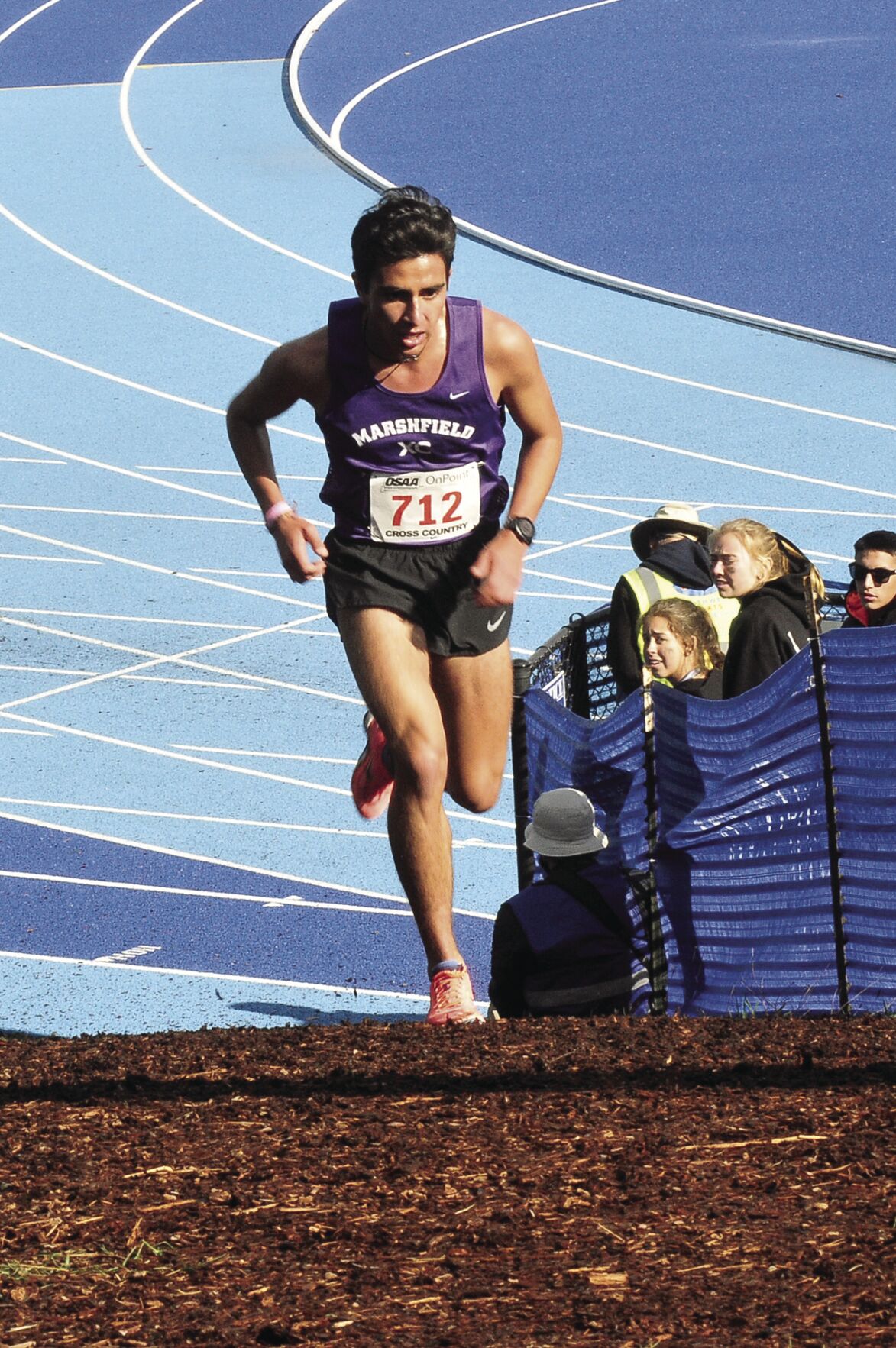 Marshfield’s Alex Garcia-Silver charges up a hill halfway through Saturday’s Class 4A state championships, with nobody close behind him. Garcia-Silver won the individual title by nearly 30 seconds.

Marshfield’s Alex Garcia-Silver crosses the finish line to become a state champion for Marshfield on Saturday in the Class 4A boys race.

Marshfield’s Alex Garcia-Silver charges up a hill halfway through Saturday’s Class 4A state championships, with nobody close behind him. Garcia-Silver won the individual title by nearly 30 seconds.

EUGENE — Marshfield’s Alex Garcia-Silver expected to be challenged in the Class 4A state cross country meet on Saturday, but when nobody went out at a fast pace with him, he just rolled with it.

“I thought some guys would go out and take it in sub-5 (minutes),” he said.

But when he hit the mile mark in 5 minutes, he was already 5 seconds ahead of everybody.

The result was a runaway victory for the Marshfield junior, who toured the 5,000-meter course at Lane Community College in 16 minutes and 2 seconds, nearly half a minute faster than Siuslaw’s Chad Hughes.

“I’m super happy with my place,” Garcia-Silver said. “It worked out.”

The Marshfield runner came in as the favorite after a season that included a number of fast times in Oregon and the South American 18-and-under championship in 3,000 meters for Colombia, his birth country. He was looking forward to a break after an all-star race this coming weekend.

He already is looking forward to his track season for the Pirates, though.

“It’s going to be super fun,” he said. “I hope I will throw down some good times.”

While the titles have been relatively rare for Marshfield, they are a regular thing for Siuslaw, which swept the boys and girls team crowns Saturday — the girls in a tight race and the boys in a blowout.

Rylee Colton placed fifth to lead Siuslaw’s girls to a one-point victory over Philomath. Siuslaw finished with 85 points, Philomath with 86 and Marist Catholic, which topped the Vikings in last week’s Sky-Em meet, 93.

“That was crazy,” Colton said. “I was so happy, senior year, to get first.”

Colton is the only senior in a Siuslaw with a squad that featured three freshmen and two sophomores.

“They are super young,” Colton said. “They are amazing. They know how to race. They race smart and mature, not like freshmen.”

La Grande’s Emily Tubbs won the race in 19:04 and Marist Catholic had two of the top six finishers. But Siuslaw won with its depth.

In contrast to the girls, Siuslaw’s boys won in runaway fashion.

Samuel Ulrich was fourth and Kyle Hughes seventh, giving the Vikings three runners near the top. Brayden Linton and Dylan Jensen rounded out the Vikings scoring runners in 22nd and 24th and Jacob Blankenship was 30th.

Siuslaw finished with 42 points in the team race. Sisters was a distant second with 88.

The Vikings also swept the titles last season, during the shortened spring season, which was not sanctioned by the Oregon School Activities Association. The last time Siuslaw swept the titles at Lane Community College was in 2004, but the Vikings have won a total of 12 titles (not counting last year) since 2000.

Colton said there is a simple explanation.

“(Chris) Johnson is amazing,” she said of the longtime Vikings head coach. “We just trust in his coaching.”

Johnson said he was proud of both his teams.

“It’s like a dream,” he said. “This is what we work all summer long, all winter long for — to come out and put our best foot forward at the state meet.”

He was particularly excited after the girls finished second at the district meet and rebounded with the strong performance at state.

“To see them come through,” he said. “It’s just fun to see kids be successful in these high-pressure situations.”

“The kids I have right now — they’re the best kids I’ve ever had,” he said. “They do the right thing all the time.”

In the state meets for the bigger schools, Corvallis put four girls in the top 12 to take the Class 5A race with 42 points, 33 points ahead of fellow Corvallis school Crescent Valley. Crescent Valley freshman Emily Wisniewski won the race in 18:27.

In the Class 5A boys race, Tyrone Gorze led a dominant performance by Crater’s boys, winning in 15:05 to lead the Comets to the team title with 35 points. Crescent Valley was second with 54.

The Class 6A girls showdown between Summit and Jesuit was another classic battle between two of the best squads in the country, with Summit edging the Crusaders 55-58, a remarkably tight race given that the Storm had four runners in the top 10. Lincoln, which had four in the top 16, was a distant third. Lake Oswego’s Kate Peters blazed through the course in 17:28 to take the individual title.

In the Class 6A boys race, Jesuit had all seven of its runners in the top 27 to take the team title with 66 points, 17 better than Central Catholic. Sherwood’s James Crabtree was the individual winner in 15:04.