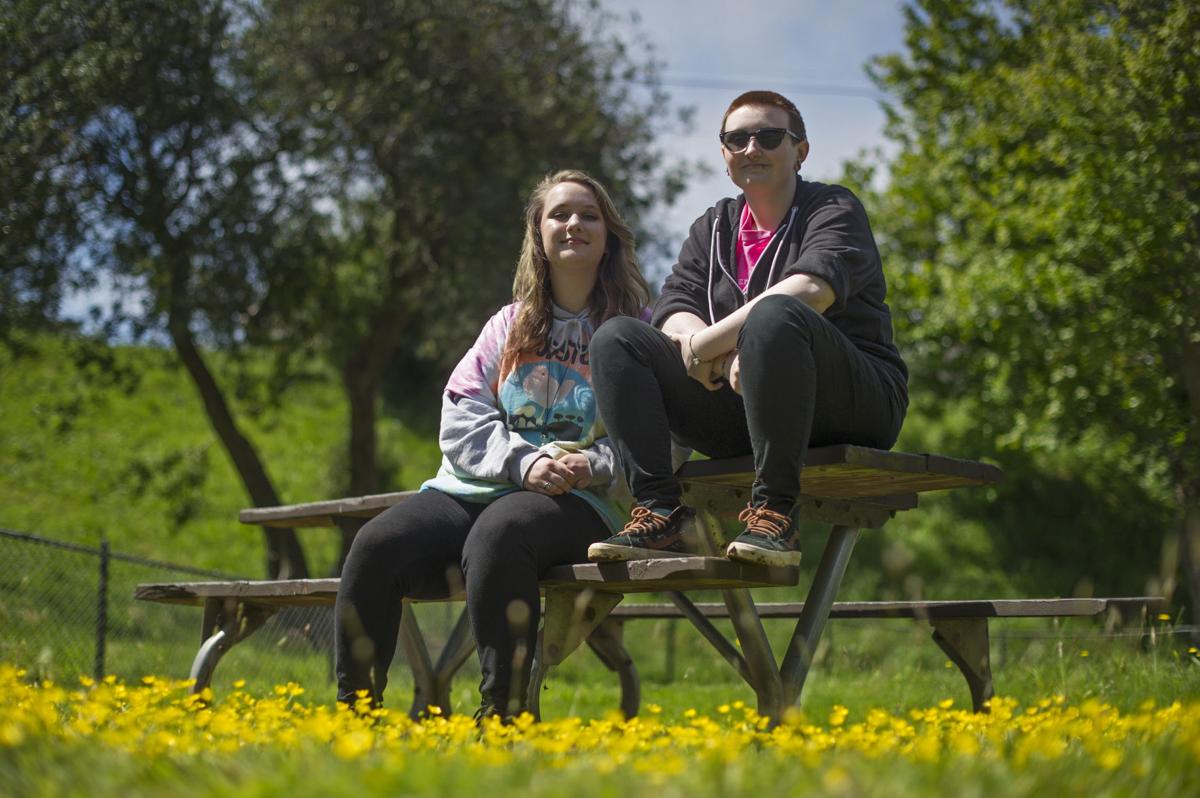 Liv Funk, left, and Hailey Smith, pictured Tuesday at Mingus Park in Coos Bay, are being represented by the American Civil Liberties Union of Oregon in a discrimination case that Monday resulted in the removal of North Bend High School principal Bill Lucero. The settlement also called for the removal of school resource officer Jason Griggs, who reportedly told Funk "she was going to hell for being gay," after she reported an assault by another student that left her hand injured. 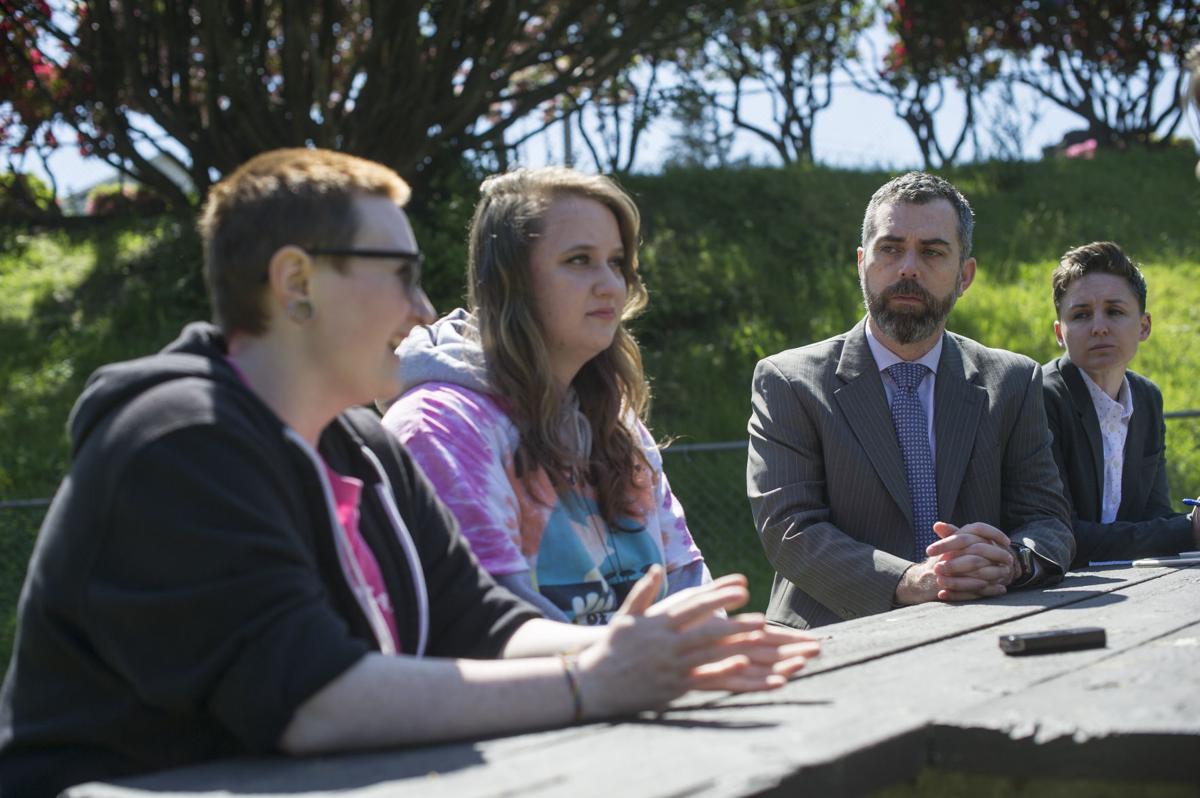 Attorney Kelly Simon, right, and Legal Director Mat Dos Santos, both with the American Civil Liberties Union of Oregon, listen to Liv Funk, center, and Hailey Smith talk Tuesday at Mingus Park in Coos Bay. The organization reached a settlement Monday with the North Bend School District resulting in the removal of principal Bill Lucero after the girls came forward with multiple claims of discrimination based on their sexual orientations. 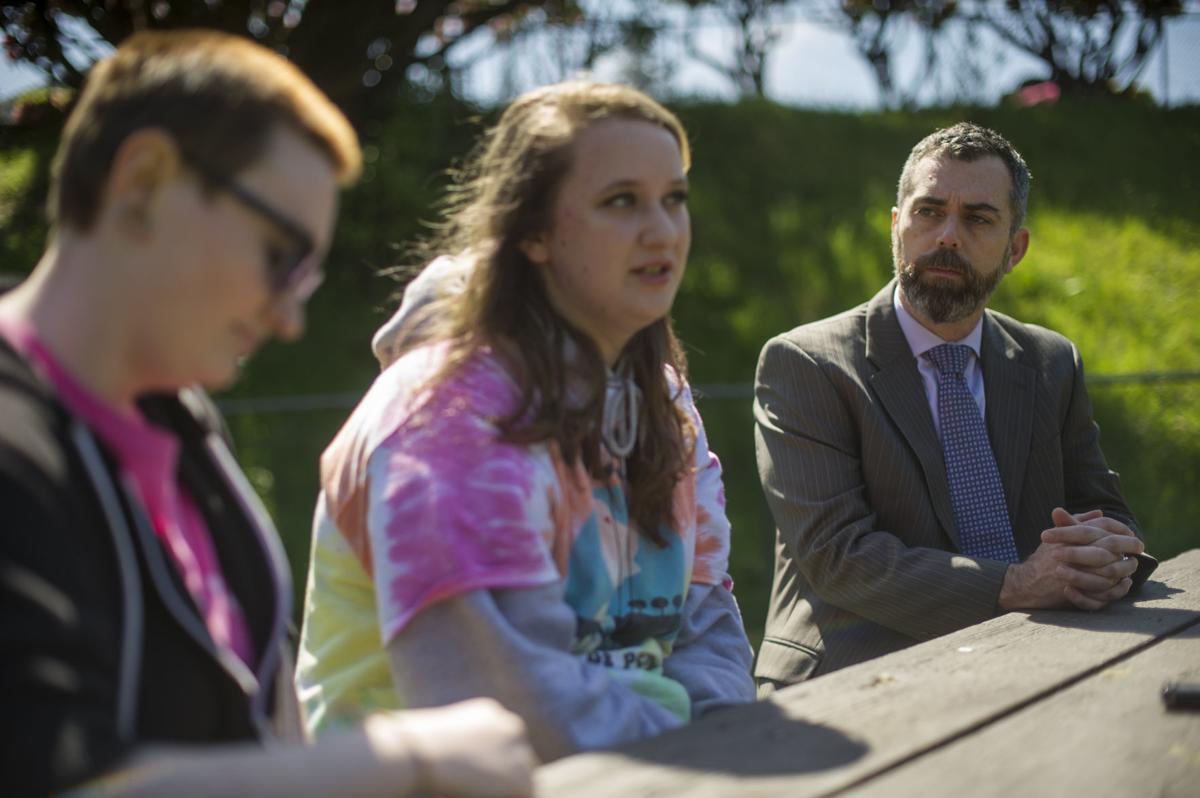 Legal Director Mat Dos Santos, with the American Civil Liberties Union of Oregon, listens to Liv Funk, center, and Hailey Smith talk Tuesday at Mingus Park in Coos Bay. The organization reached a settlement Monday with the North Bend School District, resulting in the removal of principal Bill Lucero after the girls came forward with multiple claims of discrimination based on their sexual orientations.

After years of being bullied for their sexual orientation by both students and staff, they are glad to see the district become a safer place for LGBTQ youth. Because they stood up against discrimination, which included one of their friends being forced to read the Bible as punishment, new policies are being put in place at the district to prevent this from happening again.

Because Funk and Smith stood up, they made waves that even resonated in Washington D.C. on Tuesday. Oregon’s District 1 Congresswoman Suzanne Bonamici, a leader on the House Education Committee, questioned Education Secretary Betsy DeVos during the secretary’s first appearance in front of the committee since taking office 16 months ago.

Bonamici asked DeVos if the Office of Civil Rights would investigate what happened in the North Bend School District, to which DeVos said, “If the complaint is brought to our attention, we will look at it and see if it falls under the purview of our office.”

As for the settlement, Funk and Smith are happy with the outcome.

“I think the outcome is amazing that we can create systemic change and set an example for schools who may be a little behind as well,” said Funk, who is set to graduate from North Bend High School next month.

For Smith, who graduated in 2017, she first saw discrimination in her sophomore year when she started coming out. In the beginning, people would make comments to her in passing, but it wasn’t until the principal’s son allegedly drove at her and Funk while shouting a homophobic slur at them in the parking lot that she realized they could get hurt.

When the incident was reported to the district, Principal Bill Lucero was allowed to handle the issue “as a parent.”

Funk did get hurt in February last year when her last class of the day got out 10 to 20 minutes early and she texted Smith to pick her up. She walked out of the high school to wait when she spotted boys skipping class nearby, who began making homophobic comments to her.

Initially, Funk recalled standing up to them.

That’s when it escalated.

“One of them said something homophobic to me and hit my ankle with his skateboard,” she told The World in an interview Tuesday morning, sitting between Smith and Mat dos Santos, legal director at the American Civil Liberties Union of Oregon. “I reached for the skateboard because I wasn’t sure what he was going to do after that.”

It was then that the student hit her left hand with the skateboard, damaging tendons and requiring her to wear a fiberglass splint for two weeks. To make it worse, when she reported it to the student resource officer, Jason Griggs, he allegedly told her being a lesbian was against his beliefs.

“He said he can’t help me if I choose to be a victim and that I was going to hell,” she said.

A watershed moment for public schools

News broke Monday evening after the ACLU of Oregon issued a press release announcing the settlement, which removed high school Principal Bill Lucero. The North Bend School District told The World Tuesday morning that Lucero will be reassigned, but where he is going or who is replacing him could not be answered yet.

The settlement also required the district to ask the North Bend Police Department to remove the SRO, Jason Griggs, and provide a new officer. The World reached out to the department for comment and by Wednesday morning still had not received a reply.

In addition, the settlement required the district to work with the ACLU of Oregon to create policies and training to prevent future discrimination and remain under Oregon Department of Education oversight for five years.

“The significance of this case and settlement can’t be understated,” dos Santos told The World. “It is a watershed moment for public education, not just in Oregon but throughout the country.

“There is now a public settlement agreement that can be used as a roadmap for other schools who are facing these kinds of difficulties and I hope ultimately it encourages LGBTQ youth and their supporters to come out of the closet about bullying and harassment at schools.”

This settlement has become a turning point for public education, according to dos Santos, because now there is a clear example through the settlement of what can happen if a school district fails to address discrimination complaints with significant consequences.

“One interesting thing, being in an organization that often takes positions that aren’t popular, is the overwhelming communication we’re receiving from the public that is supportive and in some respects people think this didn’t go far enough,” dos Santos said. “But there is still more work to be done for people to be protected in this community. The agreement we have in place to work collaboratively with the school and ODE will help us further those goals.”

The hearing that was to be held today and tomorrow on these issues has been canceled in light of the settlement agreements.

“The hearing has been canceled and ODE is in the process of reviewing the settlement agreement,” wrote Victoria Nguyen in an email to The World, the interim communications director for the Office of the Deputy Superintendent. “After reviewing the settlement, ODE will then issue a final order dismissing the appeal on the grounds that the parties reached a voluntary settlement.”

Now the district is being required to hire an “expert to review their policies for handling discrimination and harassment reports,” as well as to create a Diversity and Inclusion Committee to hold celebrations at the high school for “Coming Out Day, Ally Week, and issue an annual diversity award.”

Not only this, but though Smith and Funk did not settle for monetary damages, they did require for the district to make a $1,000 gift to the Q&A of Coos County, a local LGBTQ support group.

“Speak out because you will be protected”

Smith worked throughout her years at North Bend High School to raise awareness and educate staff and students on LGBTQ rights. She had even organized presentations and tried to hold one at the school, but had to first “pre-present” it to a group of people Lucero had selected.

“It was to screen what I was going to present,” she said. “Someone fell asleep during it.”

She offered to do one for the entire staff but was told it couldn’t be mandatory, suggesting it be done on a day where not everyone was able to go. Because of this, her effort stopped after the screening.

“I’m happy with the (settlement) outcome because Hailey had tried previously to work through trainings and there isn’t room for change if the same administration is in place who are unwilling to try to change,” Funk said. “I have nothing personal against (Lucero), I don’t want him out of a job, so I’m glad he can still support himself and his family but am still glad he isn’t principal at the high school.”

Funk and Smith made a point to say that though they encountered discrimination in the district, there is still “a lot of good staff at that school.”

“We had a couple counselors be supportive,” Funk said. “One counselor was a therapist hired after a cluster of suicides in the community and heard about our complaints. He is who said we can tell ODE. They tried to help us as much as they could.”

It is also the same counselor who was later retaliated against and removed from the district.

However, Funk had a message for other students facing similar discrimination.

“You’re not alone,” she said. “You’re not weird, different, gross or bad. You should love yourself and speak out because you will be protected.”

She explained that she was intimidated by bullies for a long time but once she learned it wasn’t just her, but others she cared about, she found her courage.

“I felt I needed to do this for people at school, to give them a safe learning environment, to be who they are,” she said. “I was almost out of here so wouldn’t face as much backlash that others would.”

Both Smith and Funk plan on continuing their advocacy work. Smith wishes to pursue a degree in sociology with a focus on women’s studies, along with gender and sexuality studies. Funk plans to attend an art school and then obtain a teaching degree, with the goal to return to North Bend High School.

“I had an influential art teacher who made her classroom a safe haven,” she said. “I want to come back to North Bend and be an art teacher there.”

Though their cases have been settled, dos Santos indicated that this may not be the end.

“Some of the things we have heard since taking on Liv and Hailey as clients have suggested there are probably more complaints out there just as legitimate and need to be addressed,” he said. “One of the things that became apparent to the ACLU during the investigation was there was a pattern of protecting a certain group of people from any kind of harm while anyone outside of that inner circle had to follow rules or face serious consequences and lose their jobs. If you didn’t show loyalty to the inner circle, there is hell to pay.”

He said the ACLU of Oregon will look into these complaints further in collaboration with the district and ODE, as well as to ensure mechanisms are in place to uncover additional grievances.

“We want to make sure they get processed and dealt with appropriately,” he said.

COQUILLE — The Coos County Fair Board committee met in Coquille on Monday to discuss the upcoming summer fair. During their meeting, the group…