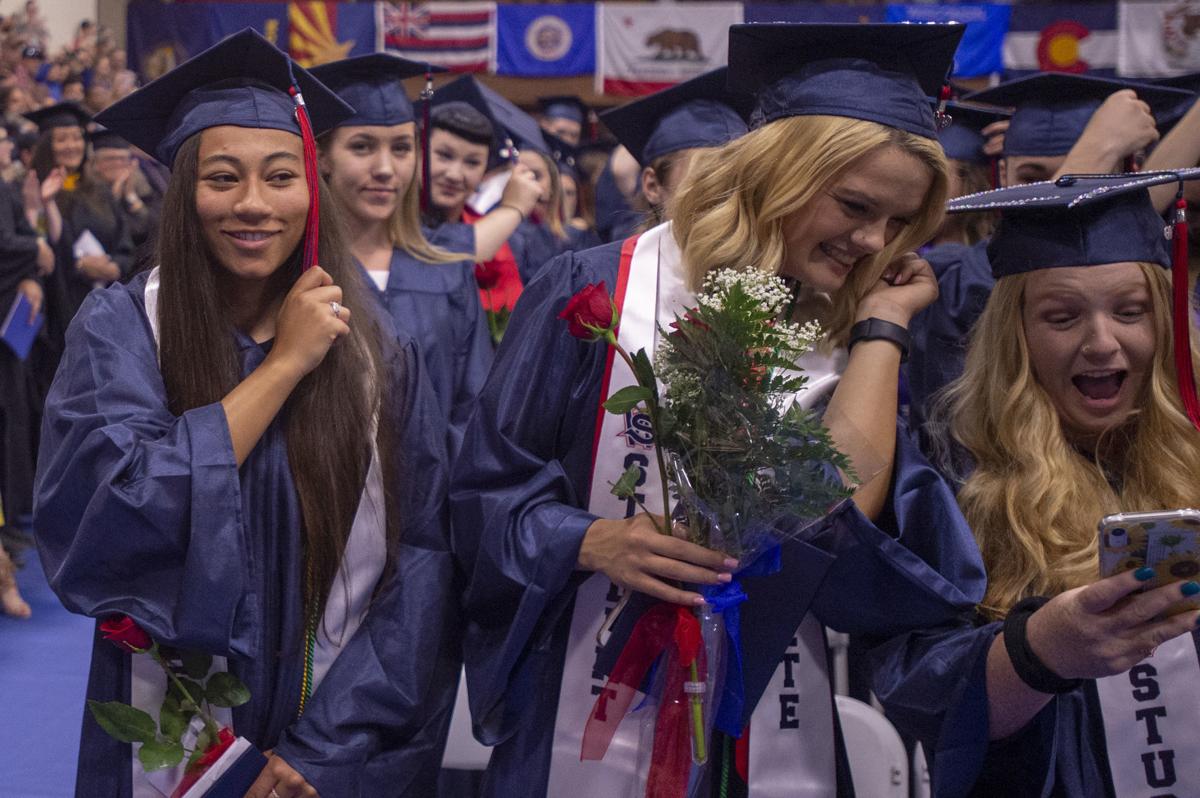 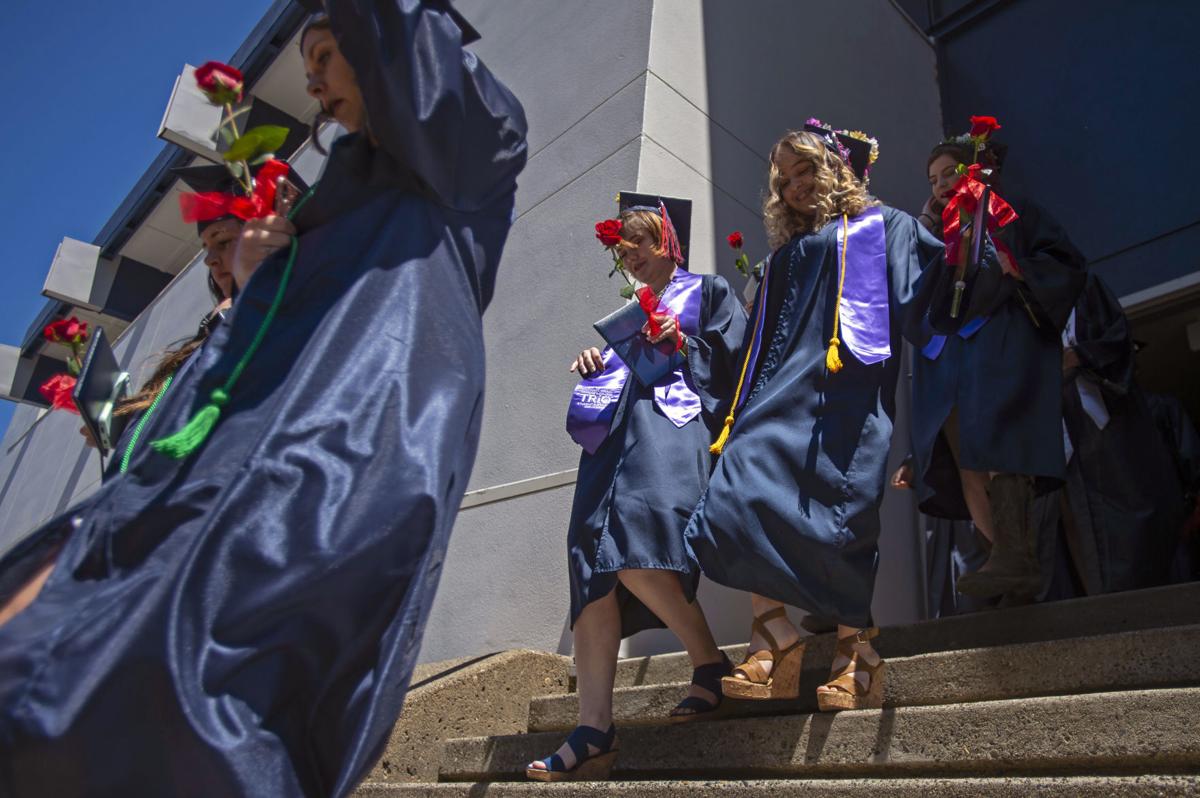 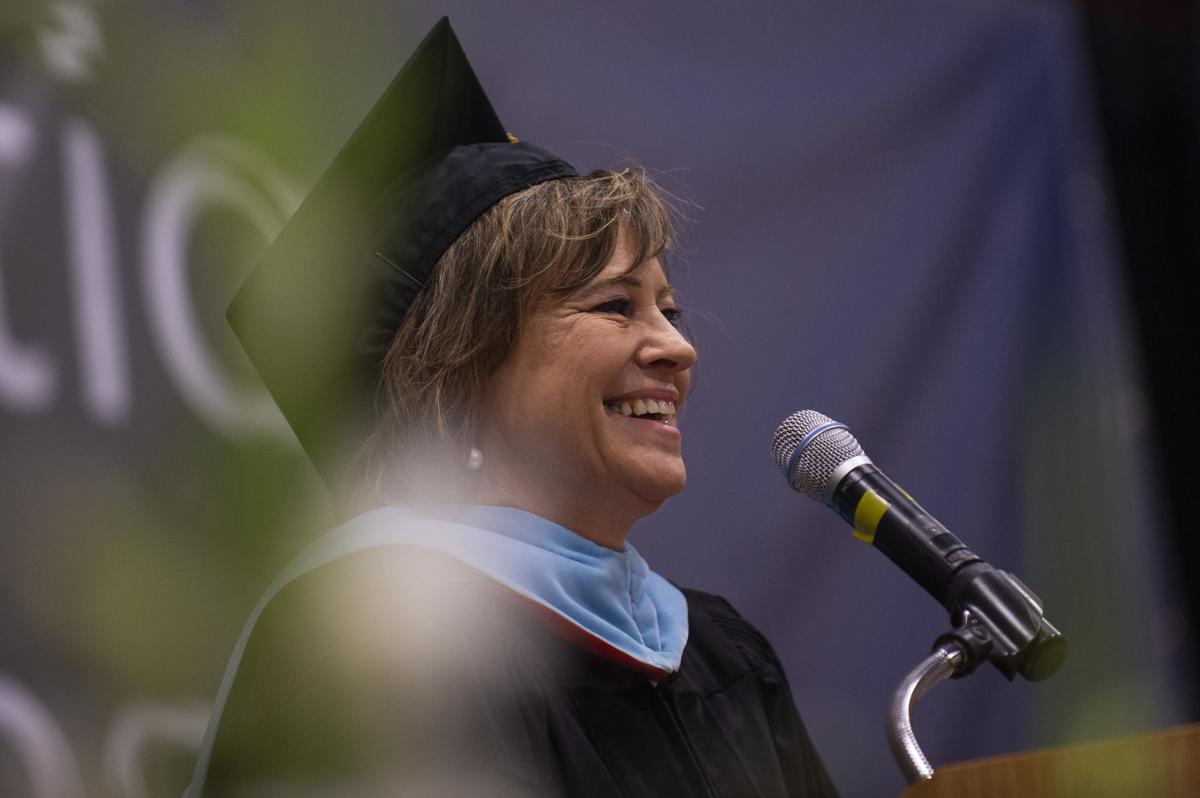 Dr. Patty Scott, President of Southwestern Oregon Community College, gives a speech during the 2019 commencement ceremony Friday at the campus in Coos Bay. 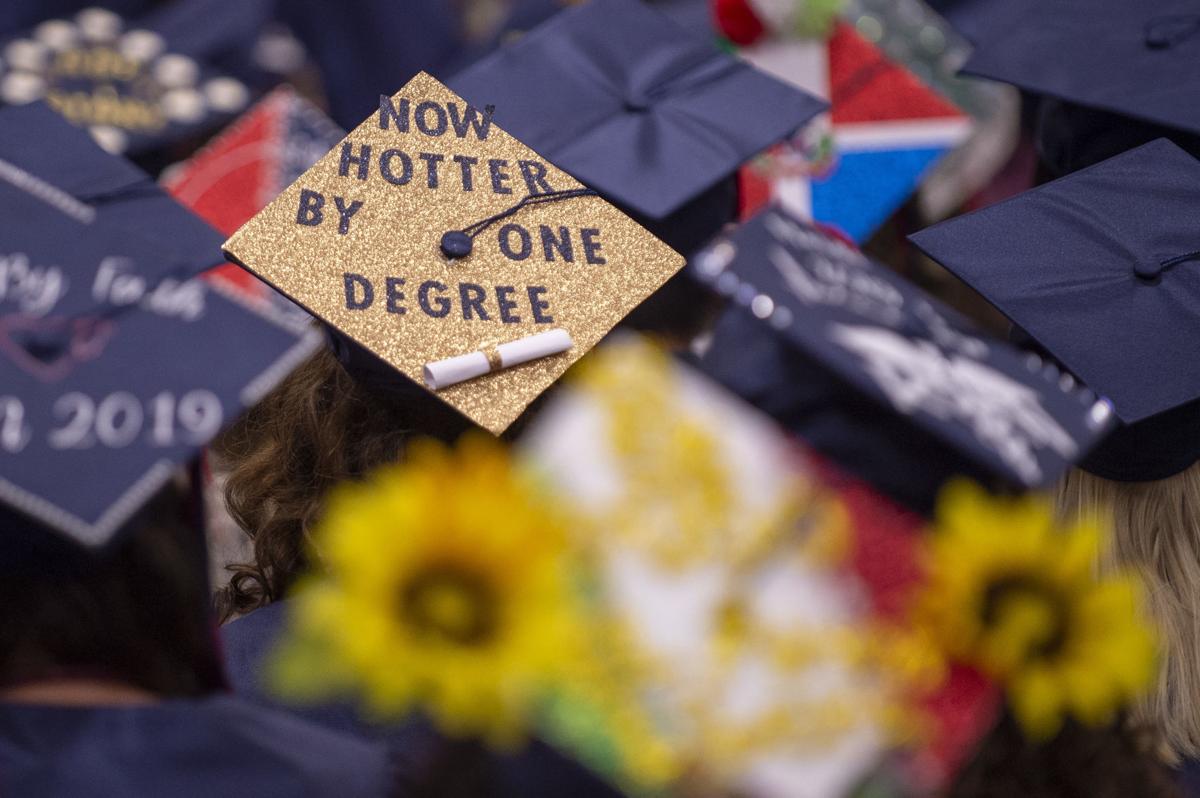 A graduate wears a message on her cap during a commencement ceremony Friday at Southwestern Oregon Community College in Coos Bay. 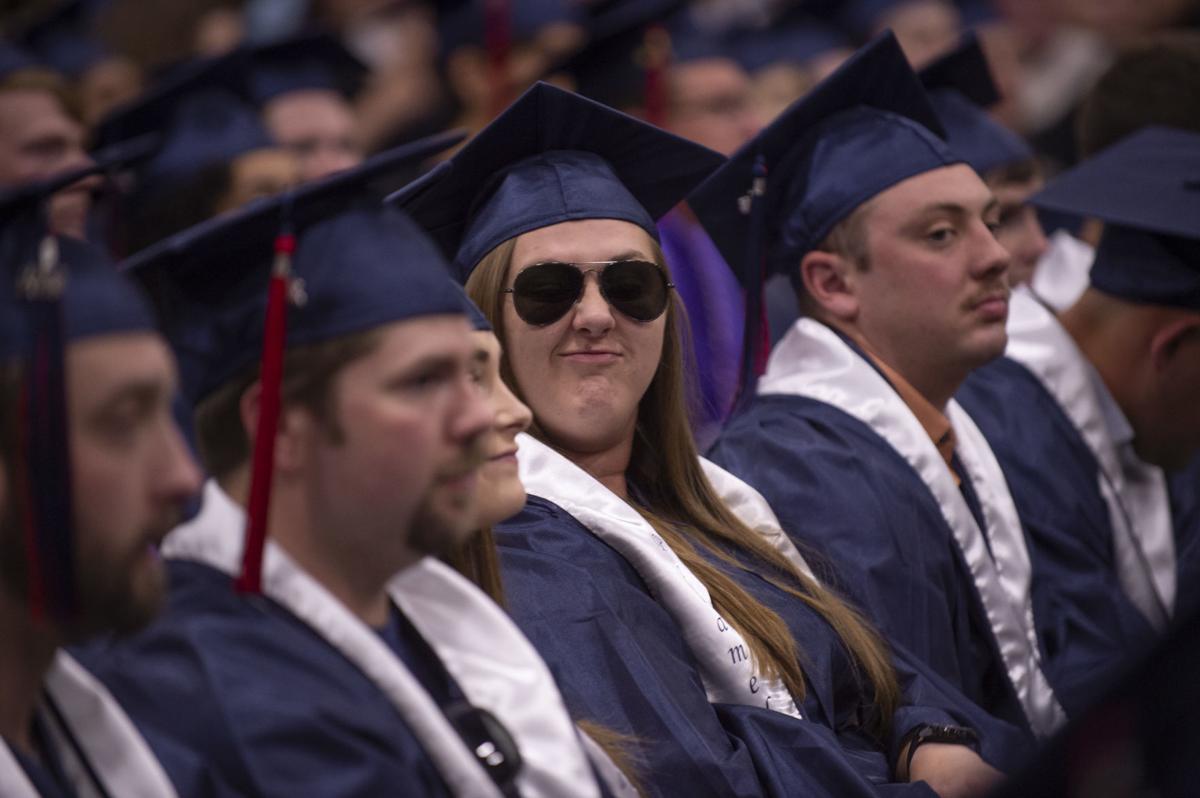 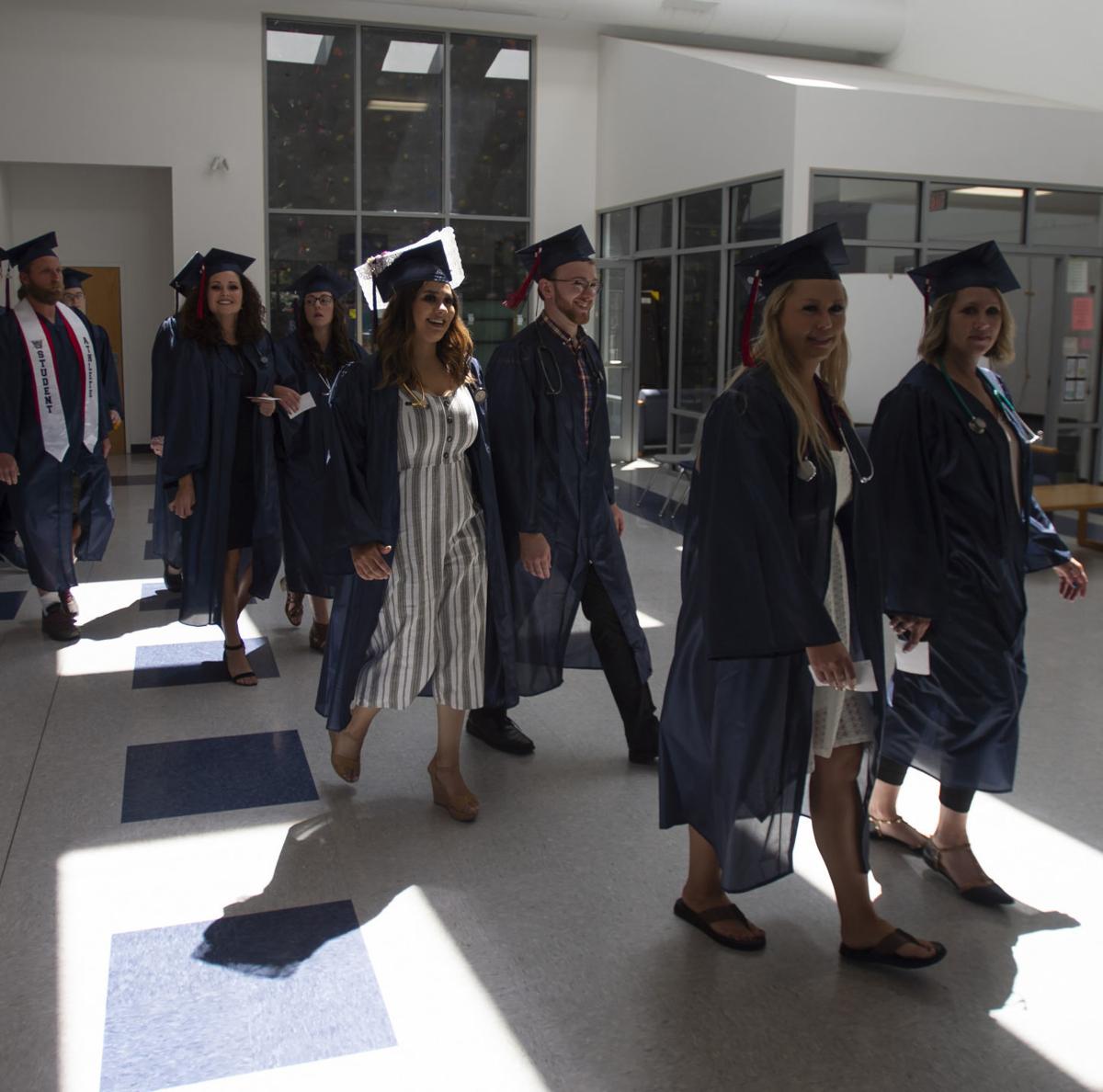 Graduates begin their walk to Prosper Hall for their commencement ceremony Friday at Southwestern Oregon Community College in Coos Bay. 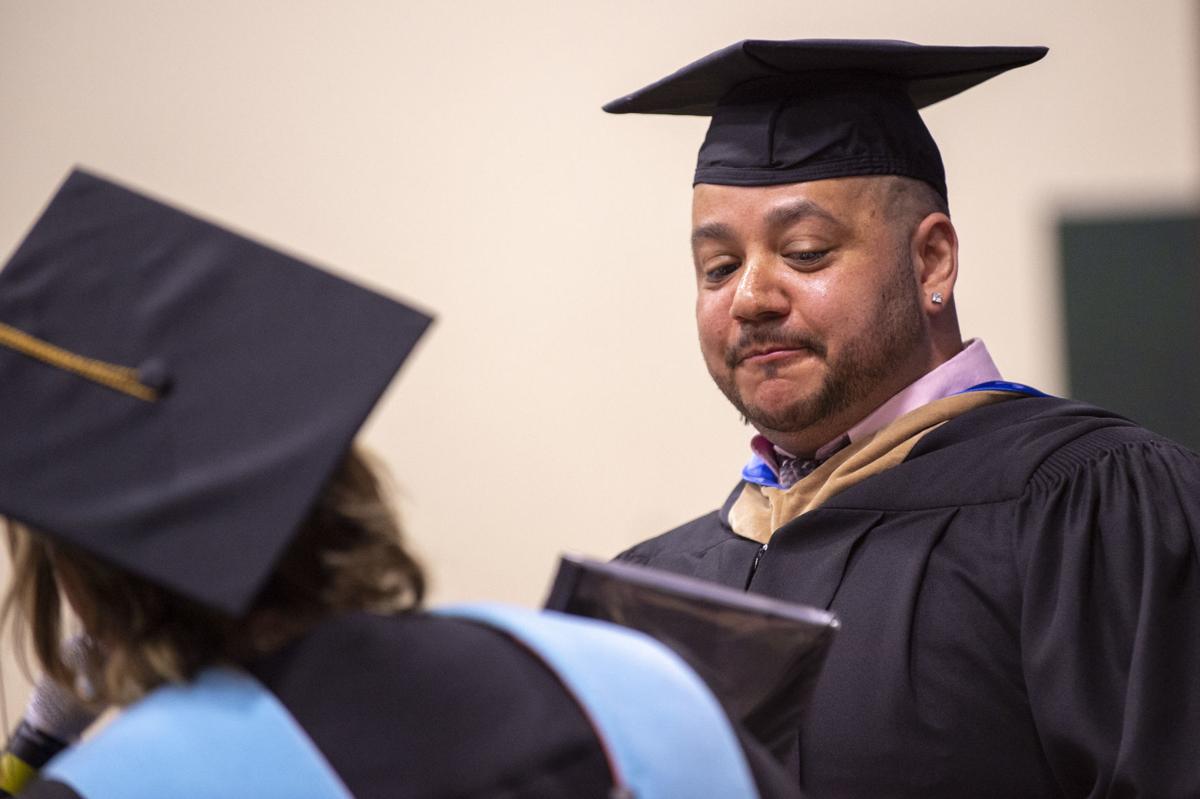 Dr. Patty Scott, President of Southwestern Oregon Community College, gives a speech during the 2019 commencement ceremony Friday at the campus in Coos Bay.

A graduate wears a message on her cap during a commencement ceremony Friday at Southwestern Oregon Community College in Coos Bay.

Graduates begin their walk to Prosper Hall for their commencement ceremony Friday at Southwestern Oregon Community College in Coos Bay.

COOS BAY — When Lakota Robison-Sanada got on a greyhound bus to visit Southwestern Oregon Community College after high school, she was looking for a chance to redeem herself.

As an athlete, she reached her peak in her junior year of high school playing basketball before it all came to a painful halt when she tore her ACL. Throughout senior year, she looked on to college as the place to get back on track.

Robinson-Sanada put together a recruiting website and focused on applying to community colleges in Washington state and Oregon so she wouldn’t be far from her family in Idaho.

Then after a coach at SWOCC invited her to visit, she boarded a greyhound bus to ride 26 hours to see the campus. She was also offered a full-ride basketball scholarship, but instead took the academic scholarship offered through SWOCC to any student who received a 3.75 GPA or higher. In high school, she had a 3.98 so she knew her education would be paid for in full.

“I also took the academic over the basketball one in case something happened,” she said.

That bus ride was two years ago. Now, Robison-Sanada stood before her peers at graduation on Friday, June 14 and spoke about patience.

“As a society, we want things now, we are impatient, but at college it’s not instant,” she said. “You have to work to get to the end goal. You have to study, put in the effort and that’s not instant. You won’t immediately obtain the information you need and people should be proud of what they do. A junior college is no different than a four-year. You still put in the same dedication, you put in that hard work, and you should be proud.”

When asked if she felt she had redeemed herself, the 20-year-old graduate said no.

“I’ve played sports my whole life and am very aggressive,” she said. “I sacrifice myself for the team.”

Because of this, during her first year at SWOCC she partially tore her ACL at the beginning of pre-season. She came back halfway through pre-season and played the second half, but once the season started she got a concussion two games in. Halfway through the season, she injured her thumb but kept playing until it eventually broke.

“I sat out the last two weeks because they wanted to reserve me for the next year, because they knew I was staying,” she said. “I didn’t have a hot freshmen season and though this year would be it, but decided to play soccer.”

But that’s when things took a turn for the worse. This past September during her last soccer game, she was moved to the forward position. Robison-Sanada was running for the ball when another player hit her from the side.

“I jarred my head the wrong way and got a severe concussion,” she said. “I went to the hospital for a CT scan. Luckily there was no bleeding, but I wasn’t able to go to school because I couldn’t focus or remember and was advised to go home.”

When she went back to Idaho, having to skip fall semester, she did rehab for a month and a half. Luckily her academics weren’t impacted by this, since she was already on track to graduate.

But it was the end of her athletic career.

“In the beginning, I was in denial,” she remembered. “I will never be able to play a contact sport again because the next one could cause damage and be life threatening. I didn’t want it to be the end though.”

She has still played sports recreationally but realized she can’t control where people’s elbows go. She's been hit in the head a couple times that brought up concussion-like symptoms like being lightheaded and dizzy.

“So that’s something I have to be careful about because one wrong hit could be it,” she said.

The 4.0 student has now graduated with her Associates of Arts in Oregon Transfer Degree and also an Associates in General Studies. While attending SWOCC, she not only played sports but worked as a resident assistant where she helped students with any problems they faced, put on events for the student housing, and did health and safety checks to ensure the living quarters were clean.

"I made sure they weren't living in filth," she said.

But now as she leaves SWOCC, she looks to attend Idaho State University to minor in physical therapy and major in athletic training.

“I will go home and work on those programs, still have six more years of school, and that’s okay,” she said. “I’ve been in multiple athletic training rooms and many physical therapy offices, I’ve experienced hands-on the work they do and the help they provide. From what I’ve been through, I will be able to empathize and share stories and help them understand the importance of rehabbing your body, sitting out and letting it heal so you can go play at 100 percent.”

Not only that, but working in those fields allow her to keep sports in her life without participating in them.

When she spoke at graduation, not only did she talk about patience but she also talked about the second lesson in college: failure.

“With failure you can decide to either stay down and wallow in self-pity or tell yourself you will accomplish this, get up and work on it,” Robison-Sanada said. “With failure comes growth. When you fail, you learn who you are and who we want to be. Without failure, we wouldn’t go anywhere.”