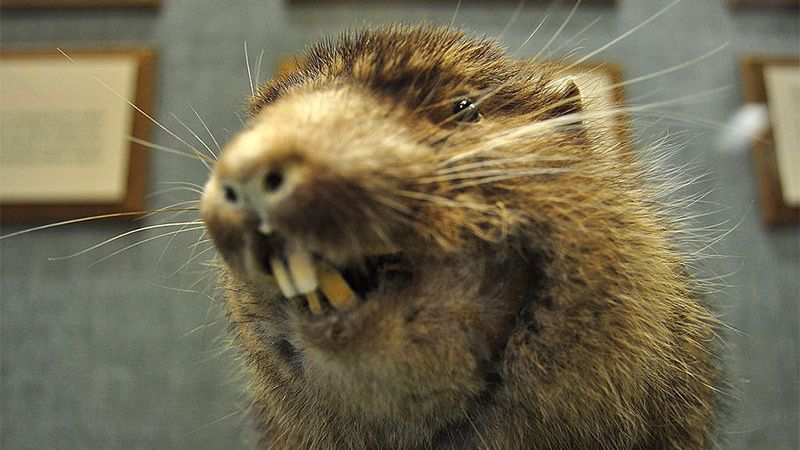 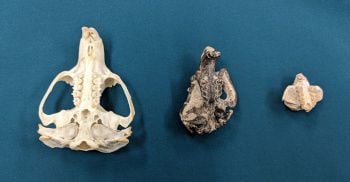 Mountain beaver skull changes over time, with the most recent skull size on the left.

Mountain beaver skull changes over time, with the most recent skull size on the left.

EUGENE — The long-held notion that today’s muskrat-sized mountain beavers are primitive and look like their ancestors is wrong, says the University of Oregon’s Samantha Hopkins.

Instead, the large rodents living mostly in moist valleys in the Pacific Northwest’s coastal mountains tell a story about rapid evolutionary change, said Hopkins, a professor in the UO’s Department of Earth Sciences and Clark Honors College.

“Today’s mountain beaver, Aplodontia rufa, hasn’t been the same forever,” she said. “Today’s version has been evolving right along with us.”

Since they emerged in North America at least 35 million years ago, Hopkins said, their bodies have grown from the size of chipmunks to that of ground squirrels and then to marmots and muskrats. Their overall habitat extends from just north of San Francisco into British Columbia. Early on, the range of more than 100 species covered more of the continent.

“They are called mountain beavers, but they are not at all closely related to dam-building beavers,” said Hopkins, who also is curator of paleontology collections at the Museum of Natural and Cultural History. “They are little loaf-of-bread-sized rodents. They are diggers rather than builders. They like moist environments mostly in the bracken around streams and up into nearby hills.”

In a new paper, online ahead of print in the Journal of Vertebrate Paleontology, Hopkins details three new extinct species from fossils found in soil sediments near McKay Reservoir south of Pendleton, in southwestern Montana and northwest Nevada. Fossils in Nevada were slowly carved out of hardened nodules of sediment.

The Oregon fossils, 5 million years old, are from the species Aplodontia micra, the closest relative to today’s mountain beaver. Those from Montana and Nevada came from two more-distant relatives, Liodontia bathypotamos and Liodentia dailyi, that date to some 16 million years ago. Placing fossils into individual species is based on characteristics related to the jaw and teeth shape, Hopkins said.

The new research, Hopkins said, was an opportunity to return to and build on work she had published 15 years ago in her doctoral dissertation at the University of California, Berkeley on the evolution and paleoecology of Aplodontioid rodents. The fossils examined in the study had been housed in different collections but had not been closely examined.

“It turns out that the mountain beaver we see today looks nothing like its ancestry,” she said. “This is something I realized early on, but I knew there was more work to do to study what led to the modern version we have today. Recently, I decided it was time to make some order of that initial work and the new related extinct species I’d found in various collections.”

Older fossils, mostly from portions of skulls, indicated that the rodents were small, while in the last million years, especially during the latter years of the Pleistocene time period, the fossil record indicates a rapid growth in size.

Hopkins has examined a dozen lineages of Aplodontia.

“The Pleistocene record of these rodents is the first time period in which we see some of the drastic modifications of their skulls for burrowing, for example,” she said. “A full examination of the ancestry of this lineage shows that even when you get to 5 million years ago, they don’t look like the species alive today.”

The general way in which masseter muscle – a facial muscle necessary for chewing solid foods – connects to the head is the only part of today’s mountain beaver that can be considered primitive, she said.

“What we learned is that modern Aplodontia is really strange and very unusual,” Hopkins said. “It is not just a living fossil; it is a lineage that has derived an unusual ecology acquired in a series of changes over millions of years.”

The State of Oregon and the Oregon Immunization Program are reminding parents that children will not be able to attend school or child care starting Feb. 19 if their records on file show missing immunizations.