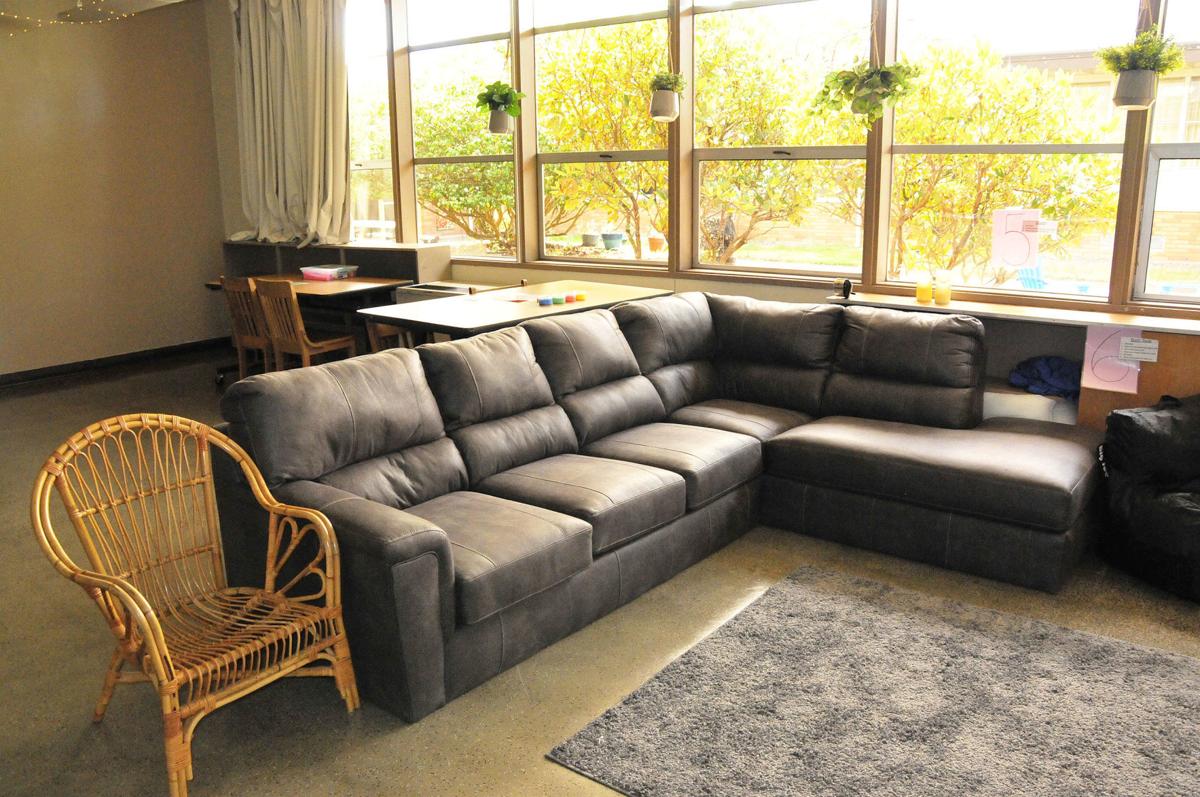 The new Wellness Room of North Bend Middle School features a comfortable sitting area, a work out space and a variety of mental stimulation activities. 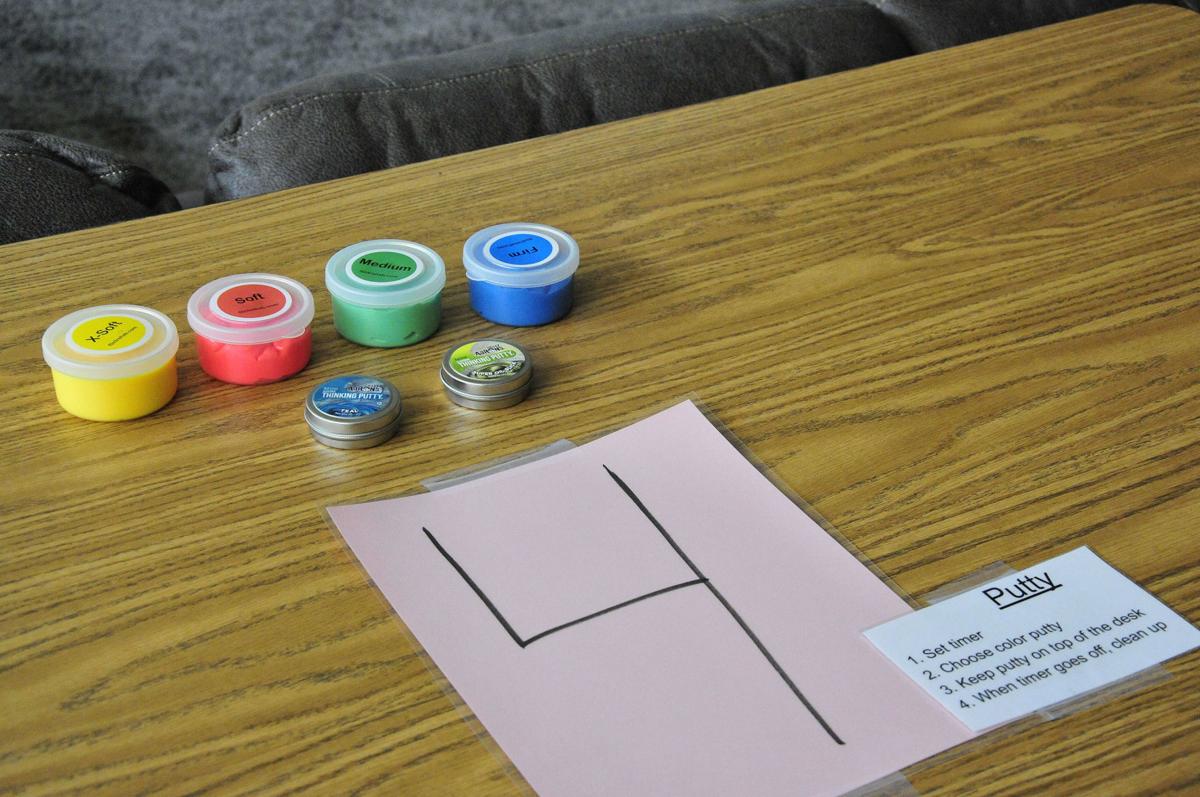 Activity stations are arranged around the Wellness Room. In this one, the student works with colored putty. 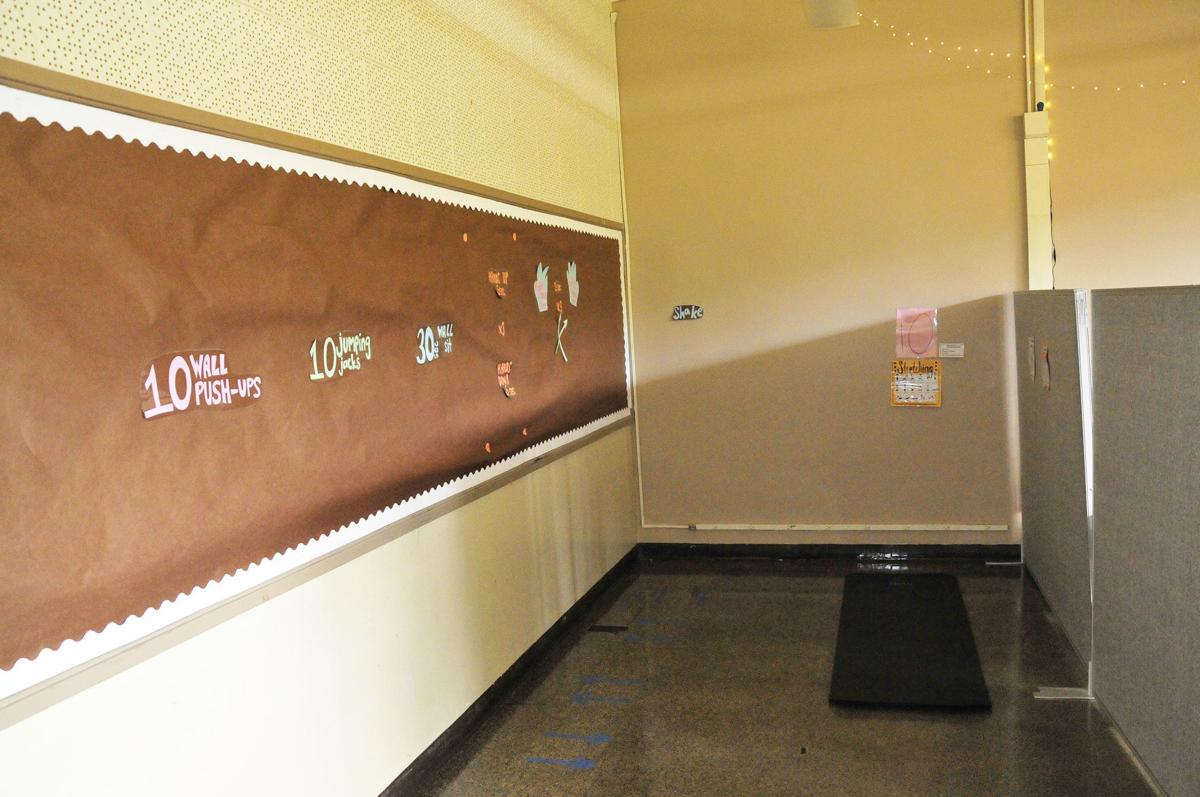 One corner of the Wellness Room has been set aside for students to do exercises, yoga, or other physical activities. 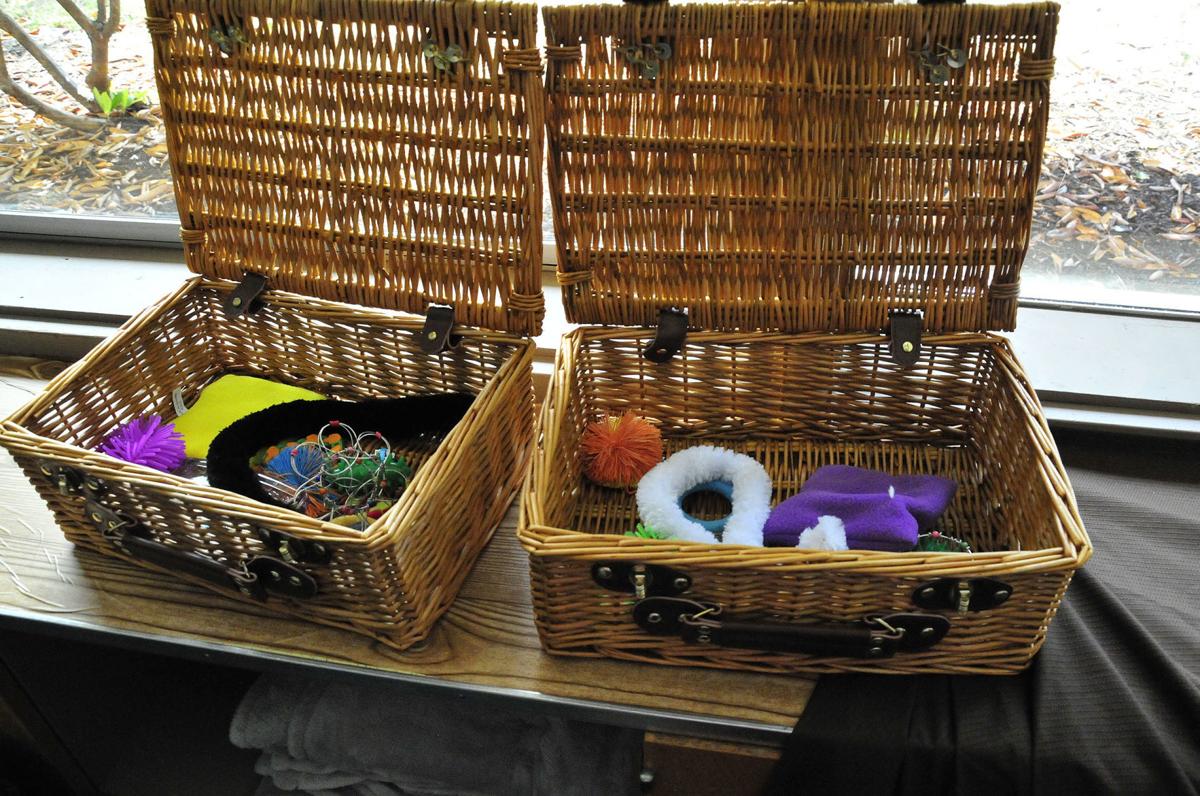 Baskets of items to exercise sensory stimulation are also available to students visiting the Wellness Room.

NORTH BEND — Classroom troublemakers are featured in Hollywood films and most school-aged books, but now the kids who act out at North Bend Middle School can spend time in the Wellness Room to re-center and calm down.

Over the summer, staff at the school put together a dim room with beanbag chairs scattered in one corner, an easy workout routine in another, a desk for students to draw, as well as textile objects like putty and sand.

“We will add to it,” said Principal Ralph Brooks. “This is just the first year.”

One corner of the Wellness Room has been set aside for students to do exercises, yoga, or other physical activities.

The North Bend School District got the idea by visiting other districts in the state that had comprehensive wellness rooms filled with sandboxes and tables with other textile objects to occupy students and help get their anxiety out.

“Students aren’t in trouble when they go in there,” Brooks said. “Instead, these kids have been identified as having past behavior issues and we’re trying to keep them on a nice emotional plane.”

The outburst these students had in previous years has been recorded and during those times in the day, the children will be sent to the Wellness Room for 10 to 15 minutes before returning to class. While there, students will go through calming techniques, exercises and activities.

According to Brooks, these outbursts come in the form of talking or not staying in their seats, or after they are given a worksheet but wad it up and throw it away.

“Really, they don’t know what they’re doing because they’re behind,” Brooks said. “If that’s the case, we’ll have an educational assistant in there to help everybody and we have a study hall we can put them in. Math isn’t the only one we’re seeing this happen in, but it is the most common.”

There are never more than four students in the Wellness Room at one time.

“It isn’t social or play time,” Brooks said. “It is regimented. When their time is up and the bell rings, they head to their class. Teachers know they will miss that part of class.”

Some students will be in the Wellness Room once a day, while others will be in as often as four times a day.

Baskets of items to exercise sensory stimulation are also available to students visiting the Wellness Room.

At the end of their time in the Wellness Room, students will also receive a protein-based snack to keep up with medical needs or just because they might be hungry.

“The kids coming in are from all over the board,” Brooks said. “A lot of times they are trying to get out of something or are having a difficult time. We’re hoping this will prevent disruption and are trying to be proactive.”

Often, students who act out start getting anxious before the class that is causing them stress. As Brooks described it, a student having trouble in math might get agitated beforehand and so will be brought to the Wellness Room before going to that class. This way, they are calm and can learn easier once at their desk.

“If there is an issue with math, they can get help for that too,” Brooks said.

The Wellness Room is overseen by the district’s behavior specialist two days a week. During the days when she isn’t there, the room is run by two trained educational assistants.

While visiting other school districts, Brooks and other administrators saw these wellness rooms or what were called “Calming Corners” also applied in elementary classrooms. Brooks said this has also been adopted by the North Bend School District this year in some elementary rooms.

“If a student feels like they need to sit, they have five minutes,” Brooks said. “That’s all they get. Those corners, this room, is helping kids regulate themselves.”

Activity stations are arranged around the Wellness Room. In this one, the student works with colored putty.

Brooks also hopes to start a Refocus Room next term where students who feel left behind on one project can take their classwork for 15 minutes to get caught up.

“We’ve all had that sinking feeling when everyone else is moving on and you’re not,” Brooks said.

Though school has only been back in session for a few days, Brooks said the Wellness Room combined with the new no cellphone policy has been successful.

Local 'Touch-A-Truck' event proves to be a huge success

MYRTLE POINT — Children climbed, explored and even honked a horn or two on a number of construction trucks and emergency vehicles Saturday in …