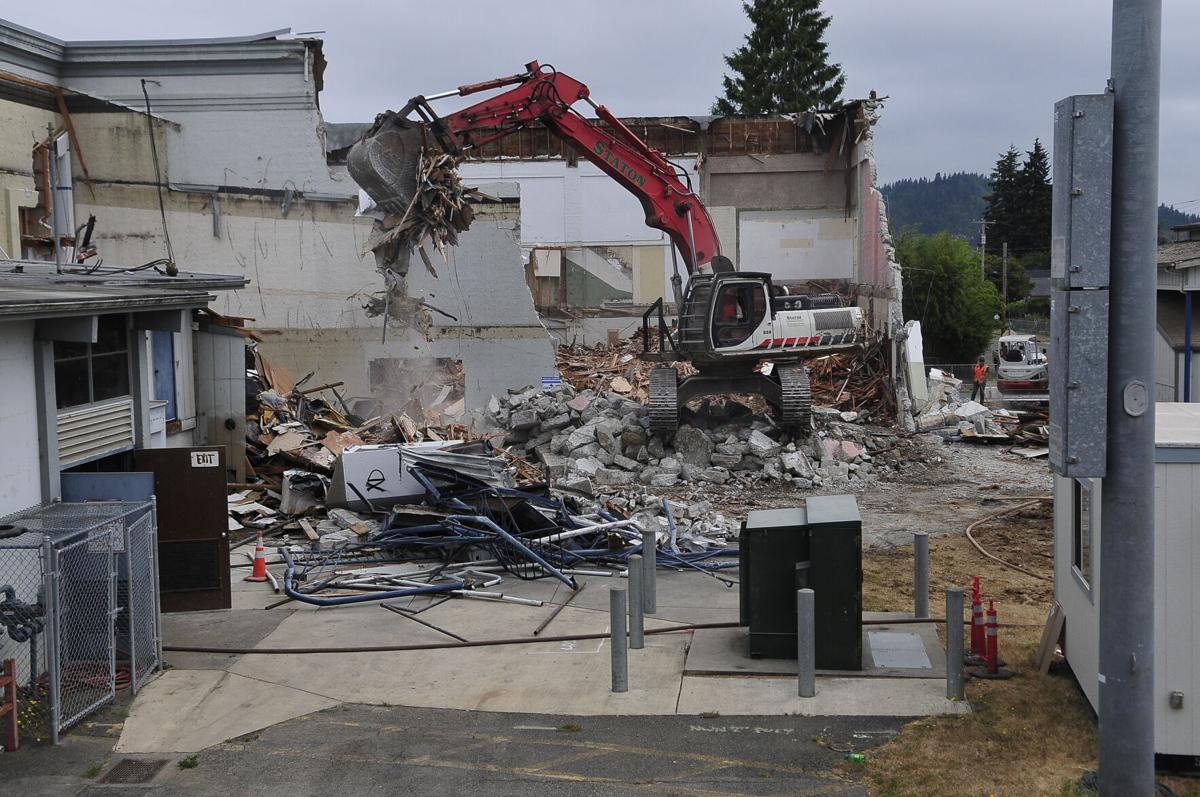 An excavator for Staton Companies of Eugene moves debris from the first portion of Myrtle Point High School to be demolished. The work to tear down the condemned portion of the building that opened in 1925 started on Aug. 3 and quickly the part of the building that used to house the cafeteria, among other rooms, became a pile of rubble. 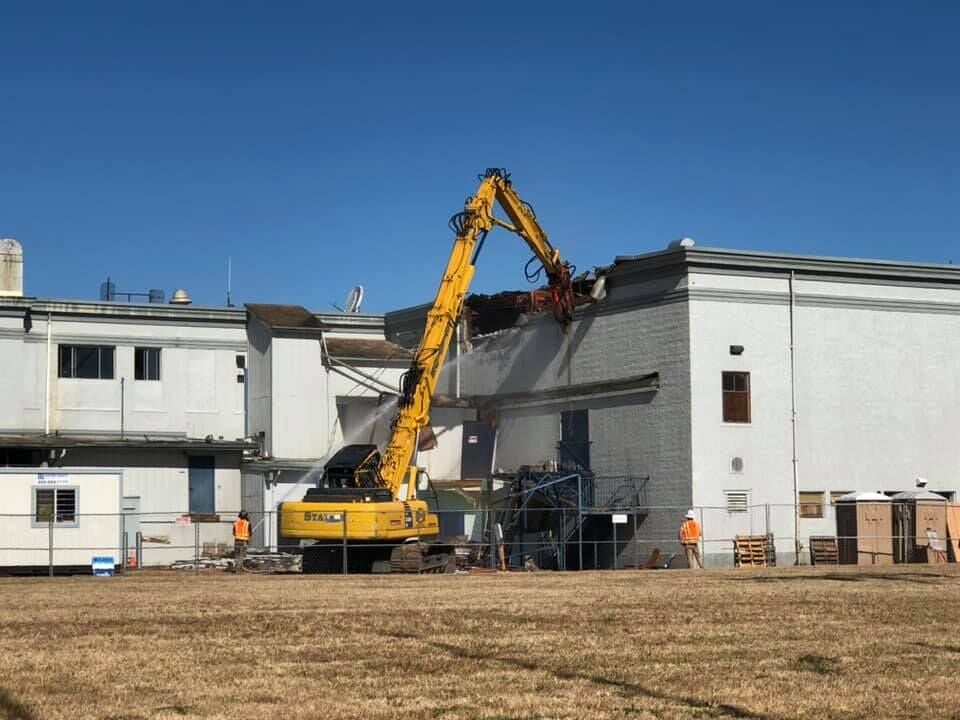 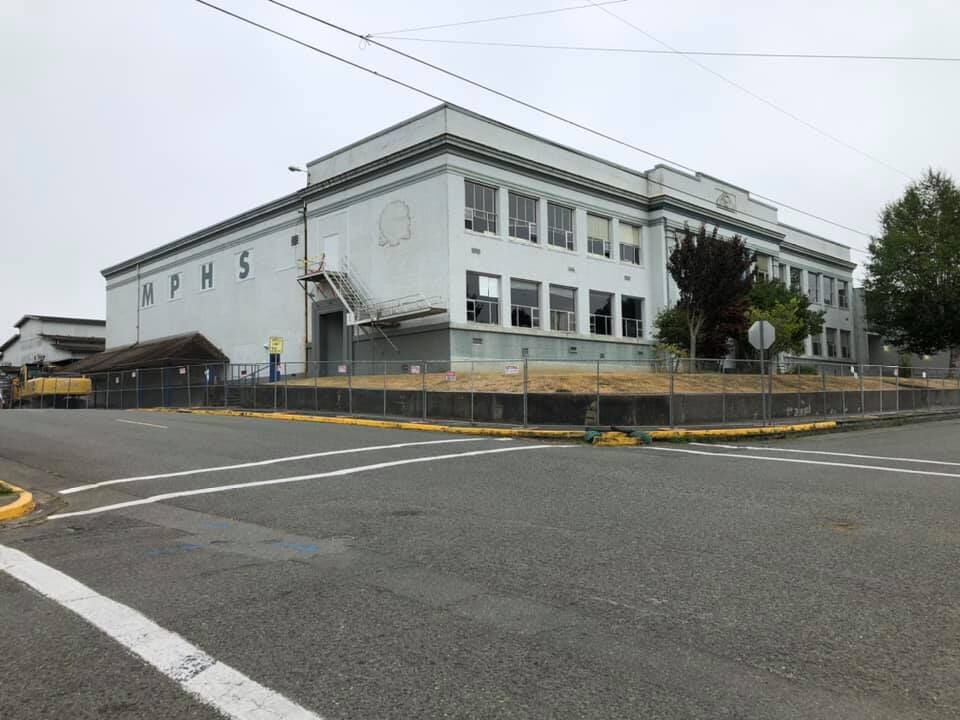 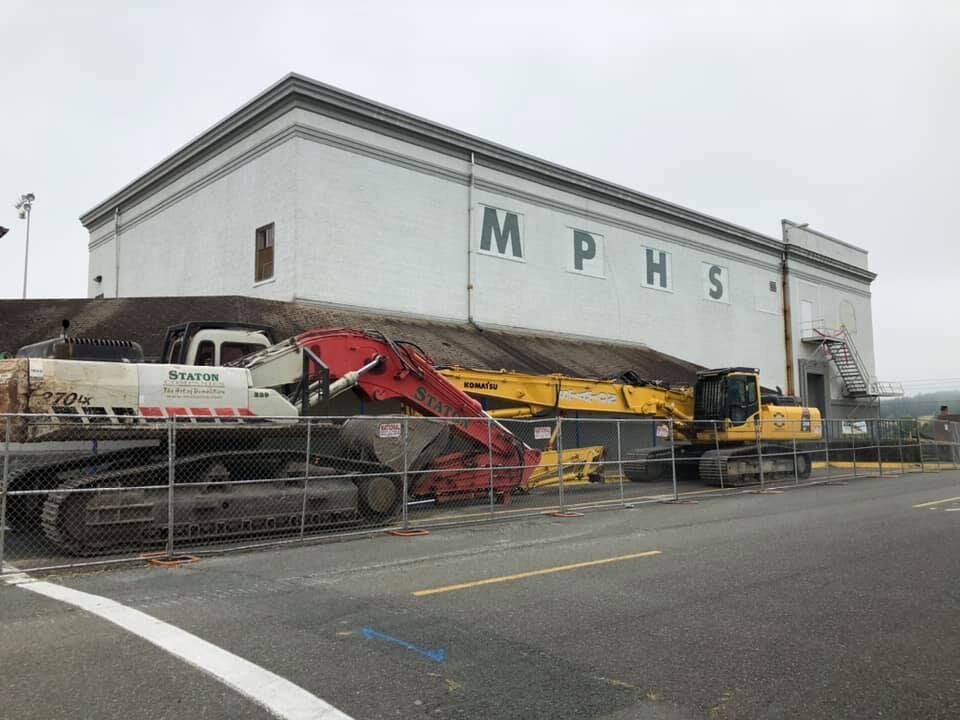 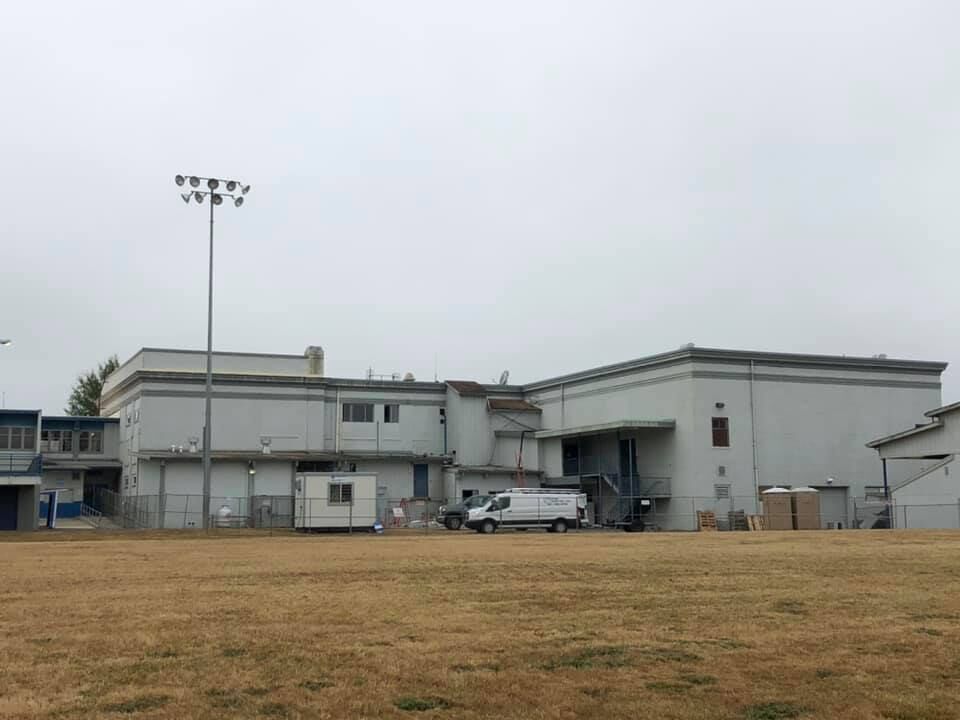 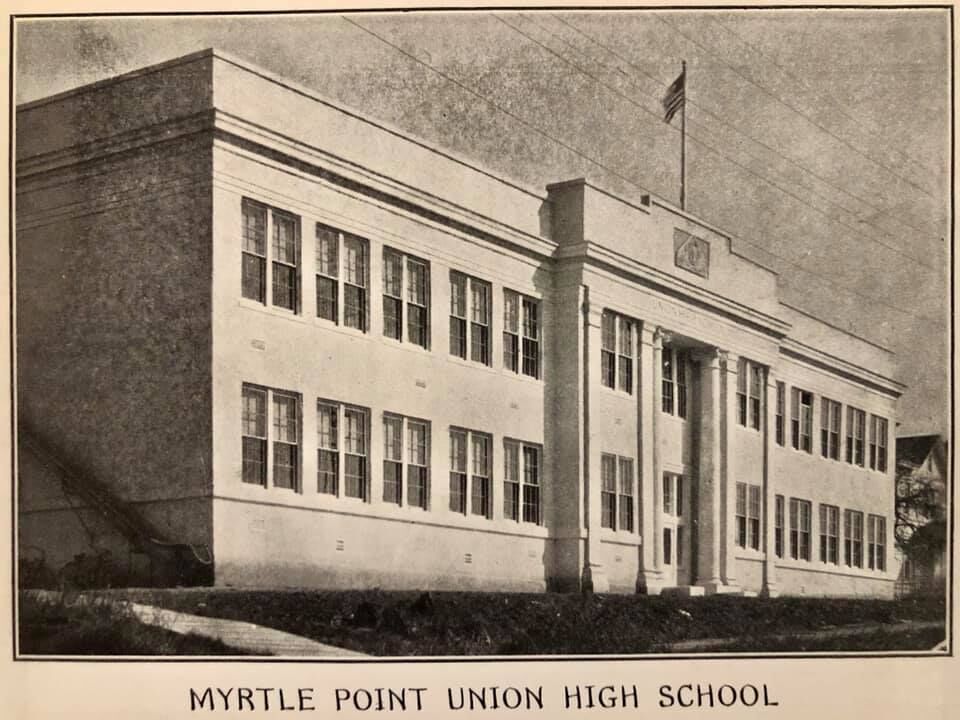 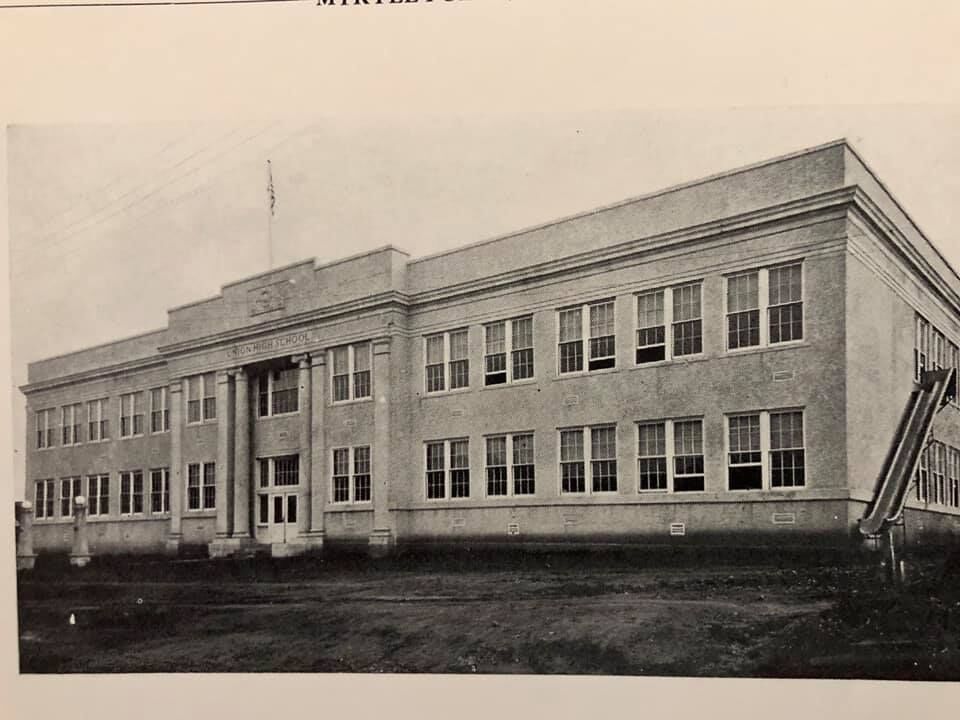 An excavator for Staton Companies of Eugene moves debris from the first portion of Myrtle Point High School to be demolished. The work to tear down the condemned portion of the building that opened in 1925 started on Aug. 3 and quickly the part of the building that used to house the cafeteria, among other rooms, became a pile of rubble.

MYRTLE POINT — A bit of Myrtle Point history is being demolished for the safety of the town's students.

Contractors from Staton Companies of Eugene began tearing down the condemed half of Myrtle Point Junior and Senior High School on Aug. 3. The building was constructed in 1925.

“The School Board decided there will be no work on the condemned part of the high school,” said Myrtle Point School District Superintendent Nanette Hagen in an article earlier this year. “It will be demolished and shored up ...."

The crumbling 1920s half of the building had “creep cracks” that couldn't be fixed and are believed to have been caused by a change in soil composition. The district was told by surveyors that the cracks would continue to grow until collapse, which led to closing that part of the high school permanently just before summer began last year in what Hagen described as “Phase One” of the crises.

Hagen added that the work being done includes reconstruction of a new wall at the marriage line between the 1920s portion and the 1950s portion. The contractor also will be regarding and topping off the area where the building is removed.

"We renewed our lease with the county for use of the Davenport Building at the Coos County Fairgrounds for classroom space," Hagen said. "We were awarded two Technical Assistance Program grants from the Oregon Department of Education in the amount $45,000 to conduct a facilities needs assessment and a long-range facilities plan.

"These grants will help us plan for what comes next in that space for MPHS. We will be going out for an RFP for these studies to be completed once demolition has been completed. The district had to take out a loan for this demolition project and is using some general fund reserves to to fund the project."

"At this time we have no funds to rebuild," Hagen added.

When a new building is feasible, sometime down the road when the district has more funds, Hagen said the process would be “very community-oriented.”

Hagen said previously the district does hope to rebuild the facility in a full capacity at some point, but part of the problem with rebuilding is the district is bonded out until 2033, which makes it difficult to think about how to fund a new building.

“That is the struggle right now," Hagen said.

The bond the district is already collecting on is from 2013. The bond has paid for seismic upgrades, new flooring and lighting on the 1950s portion of the high school, the half that is still operational.

“The bond gave a general facelift on the newer portion of the high school,” Hagen explained. “Nothing was done on the other side of the building because it was determined then to be near the end of its life.”

She explained that the board made the decision to demolish the crumbling half of the school now before it does damage to the portion of the high school still in operation.

“The board, rightfully so, is concerned about the structure and its integrity,” Hagen said in the previous article. “They don’t want to get to a place where it is so structurally unsound that it damages the building that has been seismically upgraded.”

Operating without half a school

The condemned portion of MPHS contains the cafeteria, library, woodshop, print shop, as well as several classrooms and restrooms. It also is the location for the boiler room and utilities for the rest of the building.

The boiler room structure will be maintained rather than demolished.

“We will remove the two decrepit boilers we’re not using, potentially add laundry services and put in a new electrical panel," Hagen said.

In addition to the grants Hagen applied for and received, she is looking at career pathway dollars and Measure 98 dollars to help pay for the new metal shop and woodshop building that was constructed after that part of the high school was condemned, she said.

“The bulk of the cost for demolition comes from the student investment account dollars, from the Student Success Act for year one,” she said.

Last fall and winter, prior to COVID-19 pushing the district into remote learning, the district had to shuffle students around to accommodate the missing facilities in the condemned part of the high school. The library was moved to the building under the bleachers while the cafeteria and some classrooms were moved to the Davenport Building.

Hagen said she sees this setup lasting for as long as needed.

“The county has said we can have an annual lease for four years or beyond if we need it (at the Davenport Building),” Hagen said.

“We want to thank the commissions, fair board and contractors who have been great to work with so far,” Hagen said. “I’m excited to see what the process of the long-range planning looks like for the district.”