FALL SPECIAL! - Click Here to view our latest E-Edition for FREE & purchase an annual subscription at 20% OFF! 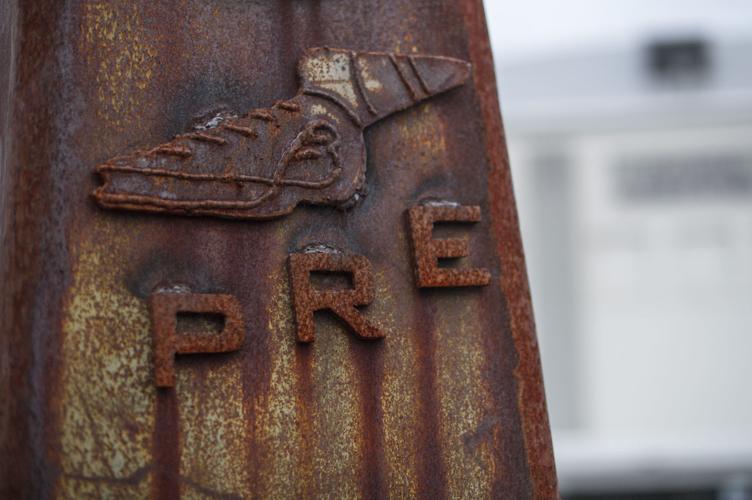 A detail on the "Circle of Friends" statue outside Heritage Hall at Marshfield High School. 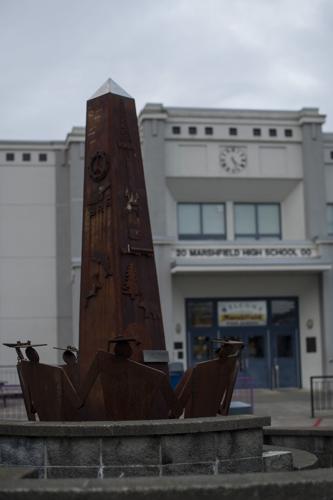 Seniors at Marshfield High School plan to replace the rusty "Circle of Friends" statue that has stands outside Heritage Hall with a 23-foot-tall stainless steel tree sculpture before their graduation ceremony this year.

Click Here to cast your 2022 Best of the South Coast ballot today!

COOS BAY — At the center of the roundabout in front of Marshfield High School’s Pirate Hall stands a rusted statue called “A Circle of Friends.”

The seniors in Glen Crook’s manufacturing class want to replace it with something that won’t rust so easily, but will also pay tribute to past graduates.

Crook’s wife, Kayla, is a teacher at MHS and the debate coach. When she heard that students wanted something new in place of “A Circle of Friends,” she pointed out that even before that statue was installed, there was once a tree.

“Apparently, and this is just a rumor, North Bend cut the tree down as a senior prank,” Glen Crook laughed. “I don’t know if there’s truth to that. It’s like the rumor that there is a pool under the gym.”

Either way, his senior class was inspired by the story. Now they want to build a stainless steel tree that stands, once completed, 23 feet tall and 32 feet wide where that rumored tree once stood.

“They want to make it stainless steel so that it will be shiny for a long time, even after they graduate,” Crook said.

The project has been approved, but now students are planning to reach out to the community for stainless steel donations and to get cost estimates from local businesses on how much it might cost to build the tree.

“We hope to break ground and get the foundation set up over spring break,” Crook said. “That way, everybody will be gone so heavy equipment can get in there. They can start building the tree before then, though.”

To make the unique idea stand out even more, Crook’s students are going to make it possible for MHS alumni to purchase leaves for the tree. Each leaf will display alumni names and graduation dates.

“Marshfield is all about legacy,” Crook said, pointing to Heritage Hall where successful alumni and their achievements are on display.

The project is broken into three phases. When Phase One is finished, the tree will stand at 17 feet tall and about 20 feet wide.

“This is what the seniors want to get done before graduation this school year,” Crook said.

Phase Two won’t be finished for one to two years later, which will attach two more branches.

“We have to keep symmetry on it so it doesn’t tip over,” Crook said. “Phase Three will make it even fuller and will be one to three years following Phase Two.”

Phase Three will put the tree at its anticipated 23 feet height.

“We want to make sure it is high enough for students not to climb on,” Crook said. “We haven’t decided if this ring at the bottom will be enough to keep students at bay. They’ve talked about putting stuff on the ground to help keep students off it, something on the ground that they won’t want to step on.”

Though this is a project just for the seniors in Crook’s class, the scope is large enough that other students will be helping who aren’t seniors.

“The cost of the leaves that alumni can buy is still in development,” Crook said. “The students need to go into the community to find if there are any resources available. If we can’t find the materials for all this, we may have to scale it down.”

Even if this is the case, Crook thanked the community for its support of his students so far.

“In my short amount of time here, people have been generous from loaning a fork lift to donating materials,” he said.

At this early stage, the tree itself doesn’t have a name. Crook said that the students have just been calling it the “Senior Tree,” but are in the process of working on an actual title.

“There’s been a few ideas thrown around,” he said.

Some of the ideas included the Legacy Tree, Tree of Life, and the Pirate Tree.

Are you happy to see the cooler weather and the change of season?