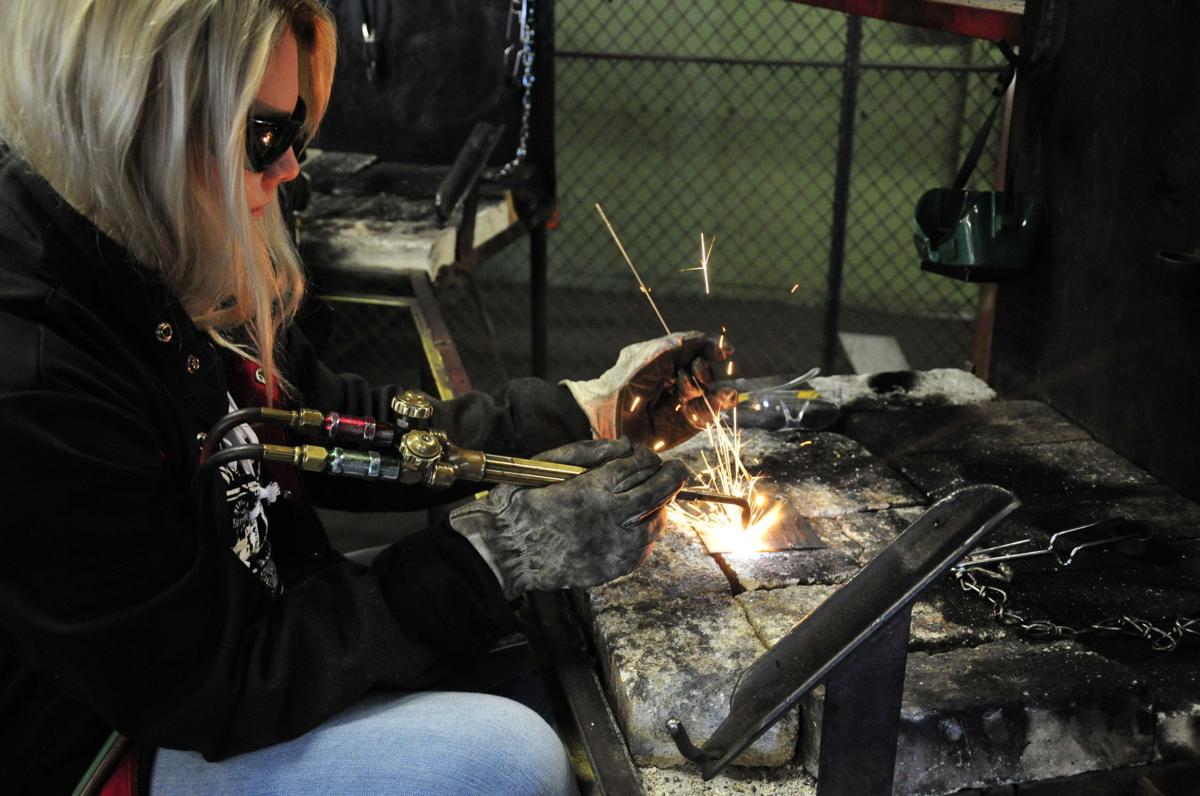 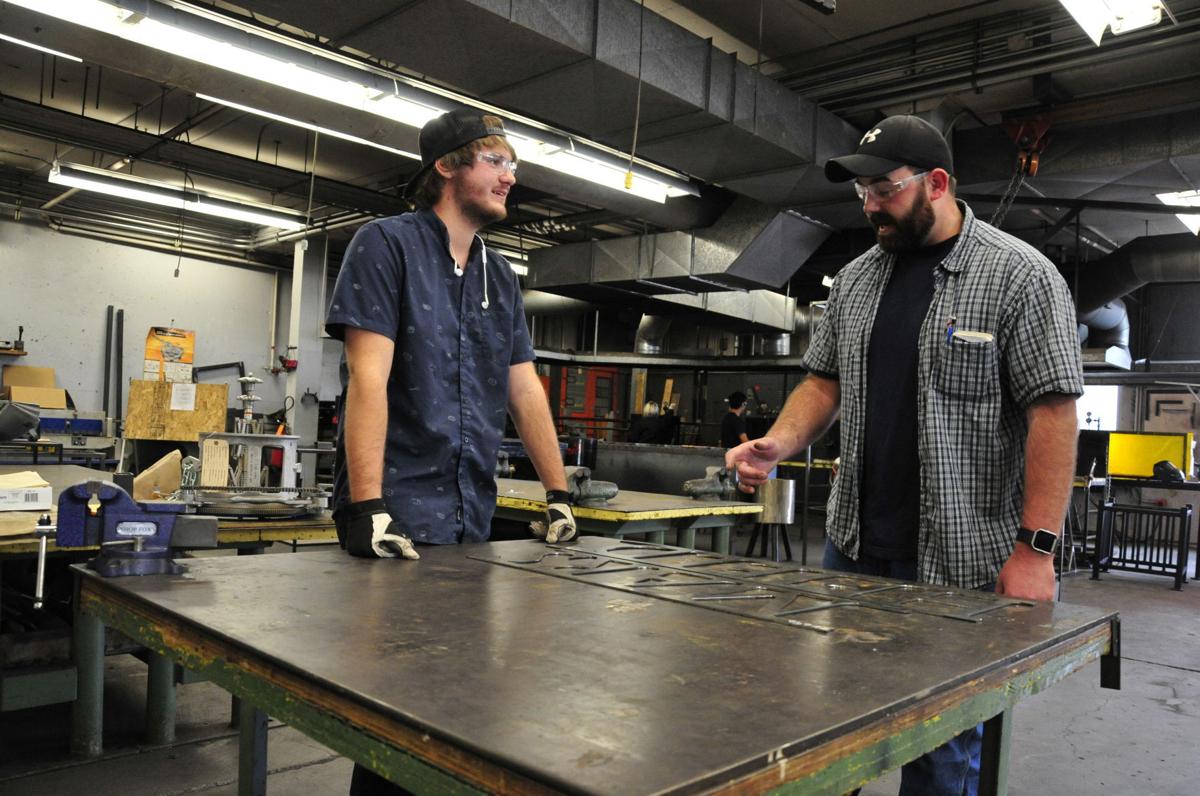 Marshfield High School's manufacturing class is creating professionals who can earn certificates before graduation, meaning students can step out of school and into high-paying and high-demand jobs. Pictured is teacher Glen Crook, left, with one of his advanced students on Monday. 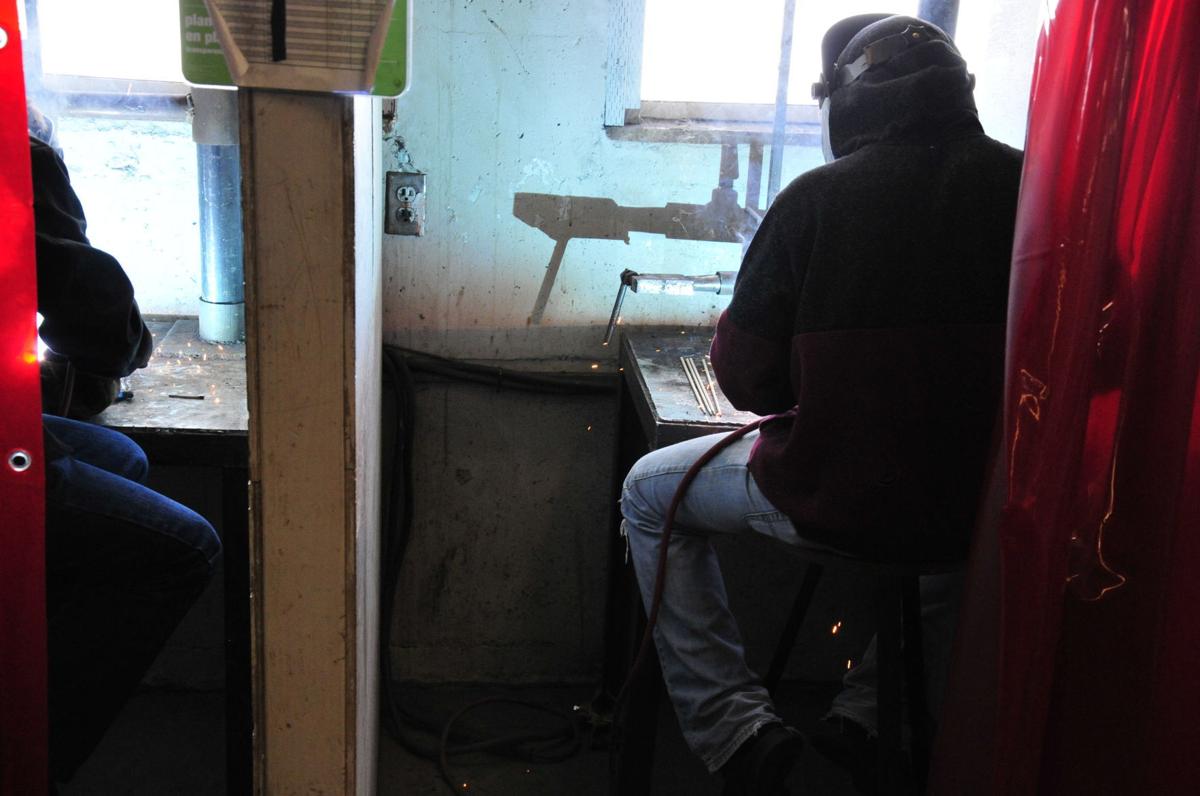 Marshfield High School's manufacturing class is creating professionals who can earn certificates before graduation, meaning students can step out of school and into high-paying and high-demand jobs. Pictured is teacher Glen Crook, left, with one of his advanced students on Monday.

COOS BAY – Manufacturing jobs are in high demand across the country. Many of those jobs start out from $15 to $19 per hour, but depending on skill and experience can skyrocket to $100 per hour.

At Marshfield High School, the skill being seen from certified welders coming out of its manufacturing class has been noticed most recently by Sause Bros., in a previous interview with The World.

“One of the things that helps in my program are my high expectations for my students, which goes alongside believing that they can achieve that college-level skill,” Crook said.

Every student is required to first go through his introductory class, which teaches students drafting skills so they can create and read blueprints. After that students can then go into the shop and learn welding skills, followed by learning machining skills.

“That first year they learn everything,” Crook said. “They use skills on computers to draw and cut things out. The second year they can choose a specialty from any of those three areas, which can be important because if you specialize in a skill then you can make more money in a career.”

The specialties include welding, fabrication, and working on equipment like the CNC machines that carve out designs into wood or steel.

“The idea is to give them as much real world experience as possible,” Crook said. “If someone comes to our department with a project, I want these students to be able to know how to build it or pass it on to our welding or fabrication team if it's beyond their skill level. This way they also learn real world solutions.”

Part of Crook's teaching philosophy is a hands-off approach. Rather than stepping in and overseeing everything the students do, he steps back after teaching them what they need to know.

“I try to do as little as possible and what I mean is not to be lazy, but the more I do than the less experience they get,” he explained. “For example, our CNC machine was built by students. What you see of that machine was 95 percent them.”

Not only that, but he also focuses on their quality of work and work ethic.

Crook works hard to have students think on their own. With his advanced class, he will give them blueprints and expect them to know how to get the project done without being told which is what a boss would do if they were hired on a job. In fact, the department is often called on by the district for projects. Crook has guided students to create the goalposts on the football field and is in the process of making tables.

“This manufacturing class is under the district's CTE (career technical education) program, which is basically training students for high wage jobs with high need,” he said. “We focus more on skills that they will need later on.”

In fact, when he attended a Skills USA National Convention, he discovered that there are over 6 million unfilled jobs in the United States. The majority of those require skills learned in CTE programs. Three quarters of those jobs don't require a degree.

“What's happening is that students are told to go to college to be successful when that's not the case,” Crook said. “There are a lot of jobs out there where you make a lot of money with a certificate.”

Though these skills can be used for high demand jobs, Crook is still working with Southwestern Oregon Community College to have college credits available through his class.

“Right now there are none,” he said. “Before it was because students couldn't get enough weld time to meet college standards. I can't match that time in 10 weeks, but I can easily match it over four years.”

Crook is also hoping that Marshfield High School joins Skills USA, which is also in the works. The state and nationwide competitions include manufacturing talents and the prizes are large.

“The students get really excited for competition,” he said. “It'd be great for them to have that opportunity and have some fun.”