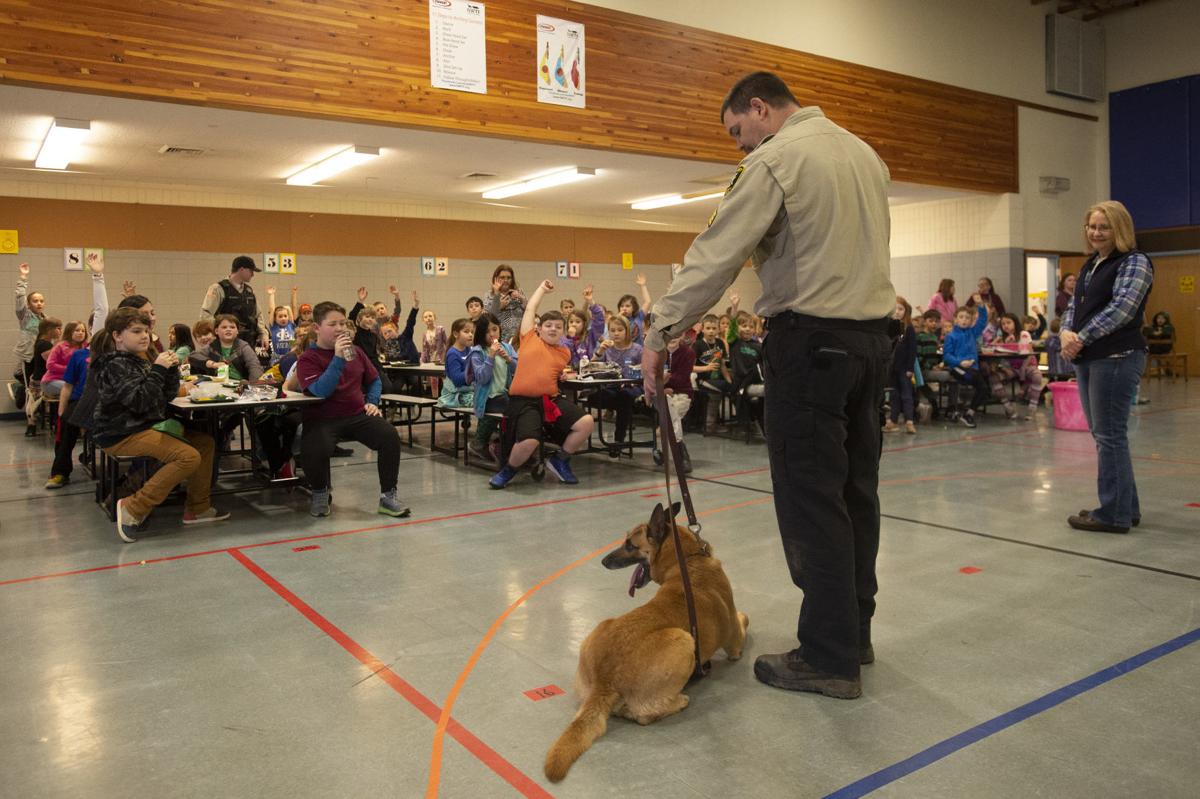 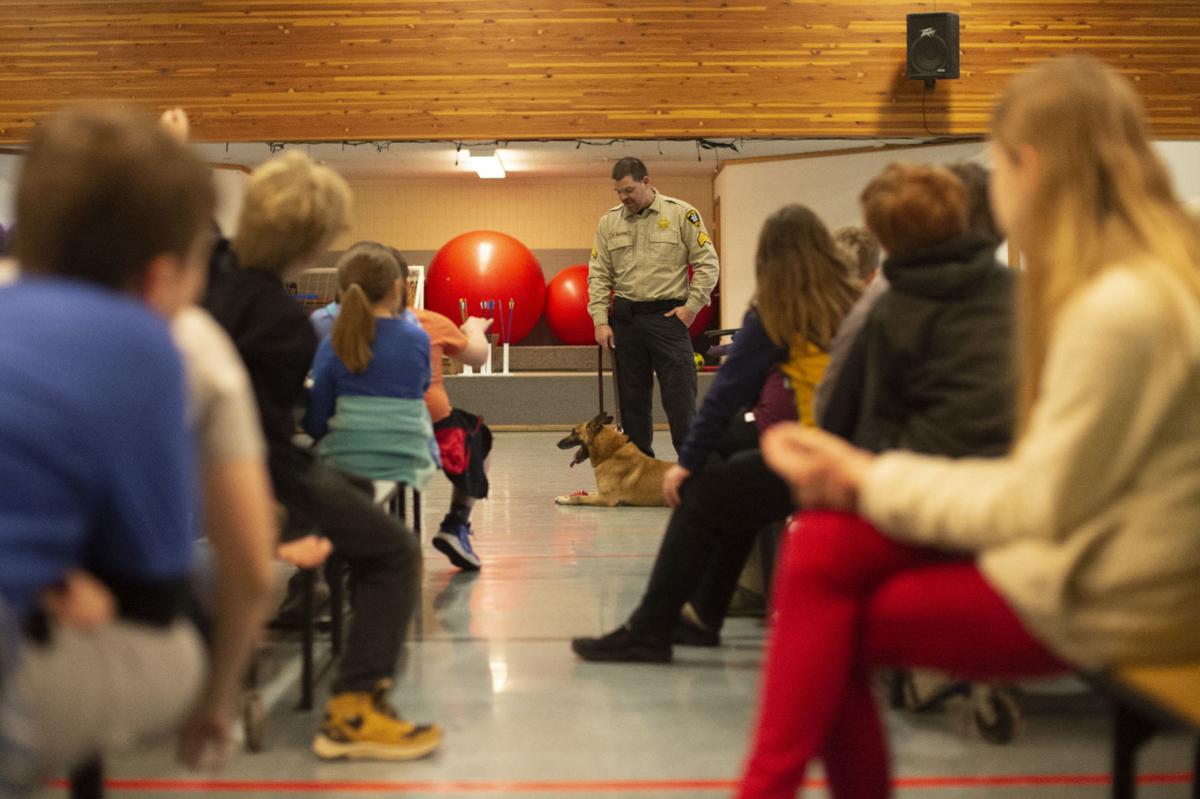 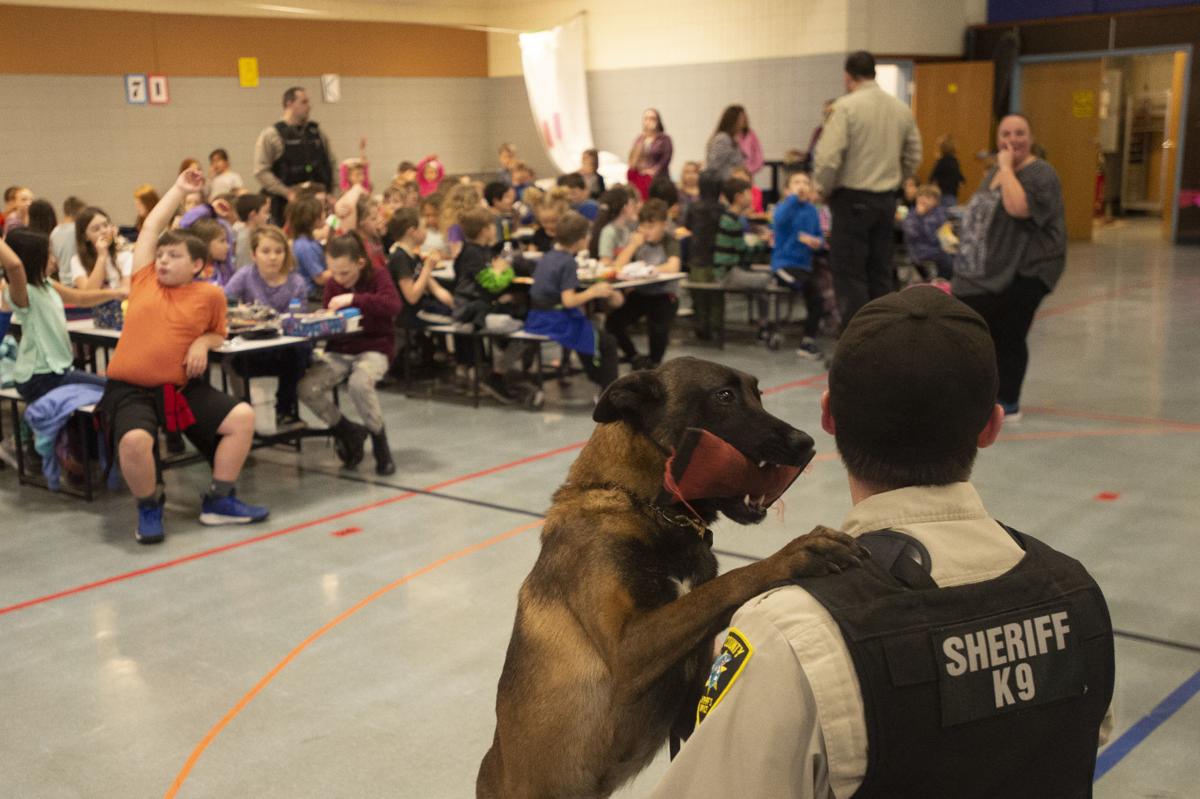 BUNKER HILL — After an arrest was made behind Lighthouse School this month, Coos County Sheriff’s Office deputies returned — but this time to meet with students.

The school was placed on lockdown Feb. 14 when reports were made that a man nearby had a knife. Law enforcement deployed K9 Odin to help track the subject down after he fled, catching up with him behind the school’s playground. The man, later identified as Shawn M. Hampton, tried to stab Odin with a kitchen knife.

Odin and Raven at Lighthouse School

“K9 Odin’s harness protected him and Odin was not injured,” read a press release from CCSO.

Lighthouse School Director Wade Lester said Deputy Adam Slater called last week hoping to bring Odin in to see the students. Lester said “as timing would have it” he was already going to call and ask the same.

“Kids had made Get Well cards for Odin and we gave them a lifetime visitor pass,” Lester said.

Deputies arrived on Friday, Feb. 21, including Slater with Odin and K9 Raven, to say hi to the students. Lester described the meet-and-greet as “great.”

“Kids at the school signed another poster board for them,” he said. “The kids were very excited. They knew to keep calm, not yell or scream because it can make the dogs anxious.”

According to Lester, students asked questions about how tall the dogs were, where they were born, their favorite food and favorite toy, as well as how much training they’ve received.

“It was really nice,” Lester said. “When these dogs are off-duty, they are just regular loving dogs.”

Looking back on the events from Feb. 14, Lester said the “scary event” went as well as could be expected.

“These kids have taken the drills very seriously,” he said. “They understood it was real as it happened. They knew to close the doors, lock them, turn off the lights, draw the blinds and wait for further information. They reacted how the staff and I trained them.”

After the lockdown, Lester said there were some students who were still upset, which led him to make follow-up calls to their families.

“We haven’t done a lockdown drill with kids in the cafeteria for quite a few years now,” he said, adding that in the future the school may put students into the rooms near the cafeteria where doors self-lock instead of having them hide under tables. “(In those rooms), students would be completely out of sight and very secure as well.”

Odin and Raven at Lighthouse School

But overall, he said he was proud of how the students reacted to the situation.

“We’re really thankful from the response from the community and law enforcement,” he said. “We forget these policemen have families and kids in these schools too. They are very professional and sensitive to the kids … and parents have commented how much they appreciate law enforcement in the county.”