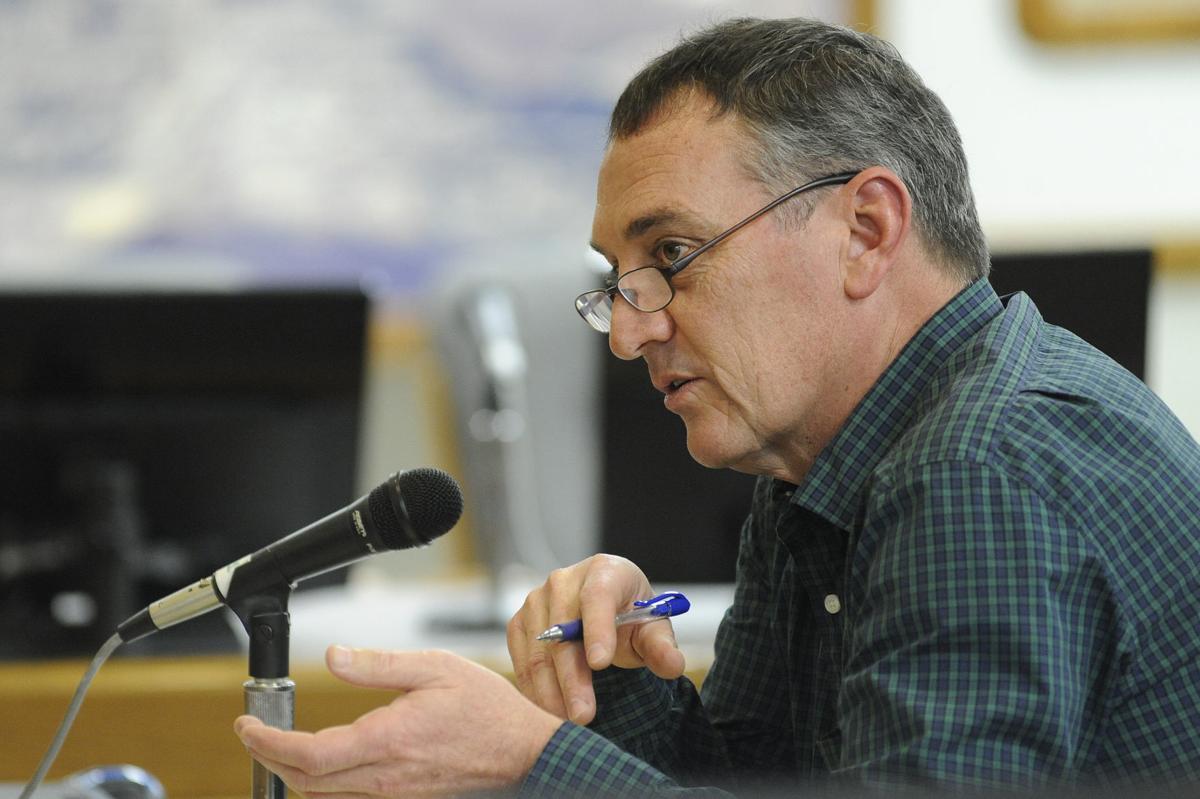 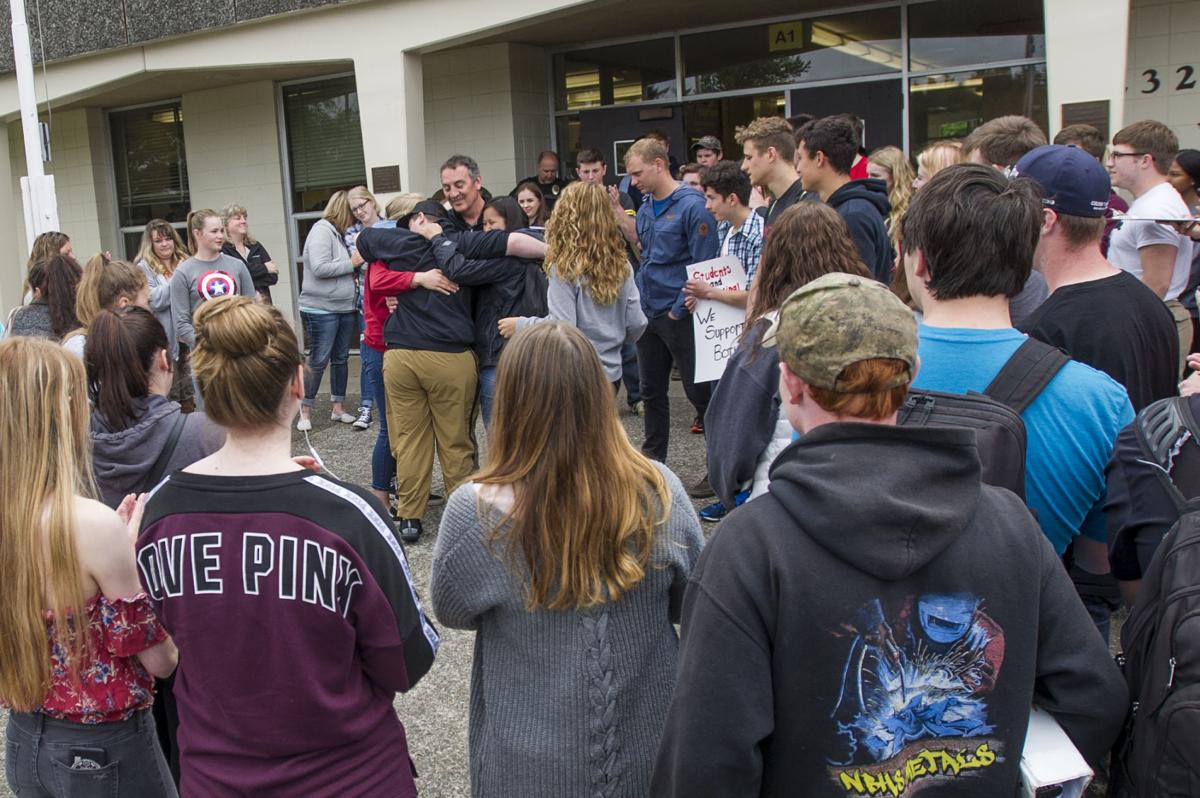 A group of students embrace outgoing principal Bill Lucero in May during a walk out at North Bend High School. Lucero was removed from his position by the school district in the wake of allegations of discrimination by a pair of students. 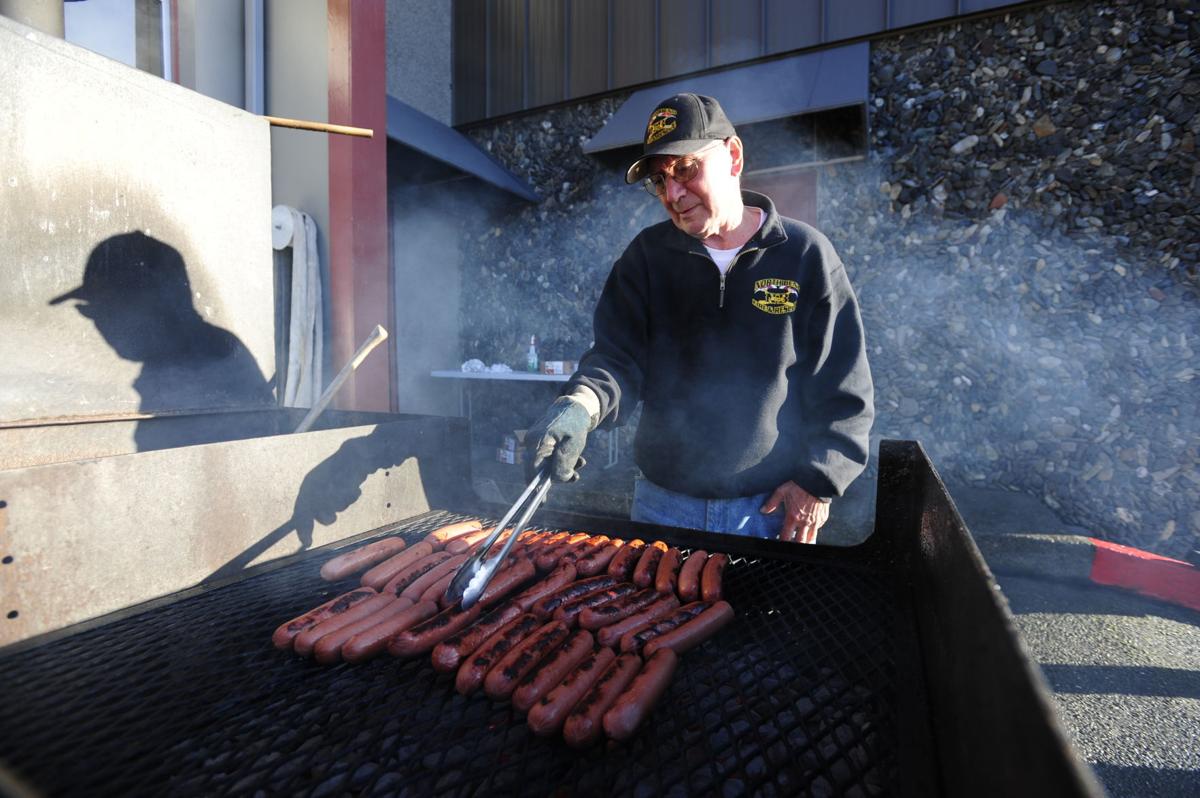 A group of students embrace outgoing principal Bill Lucero in May during a walk out at North Bend High School. Lucero was removed from his position by the school district in the wake of allegations of discrimination by a pair of students.

By definition, a tort complaint seeks compensation after potential civil wrongdoing and may be settled in court.

“On June 12, 2018, we wrote to the Board listing our concerns regarding the District’s unlawful treatment of Mr. Lucero,” read the tort claim, sent to the North Bend School District last month. “While we hoped that this letter would serve as a starting point for open and transparent discussions with the District and the Board, the opposite has occurred. At every turn, the District and the Board have demonstrated a preference for secrecy rather than transparency, and for self-preservation rather than accountability.” 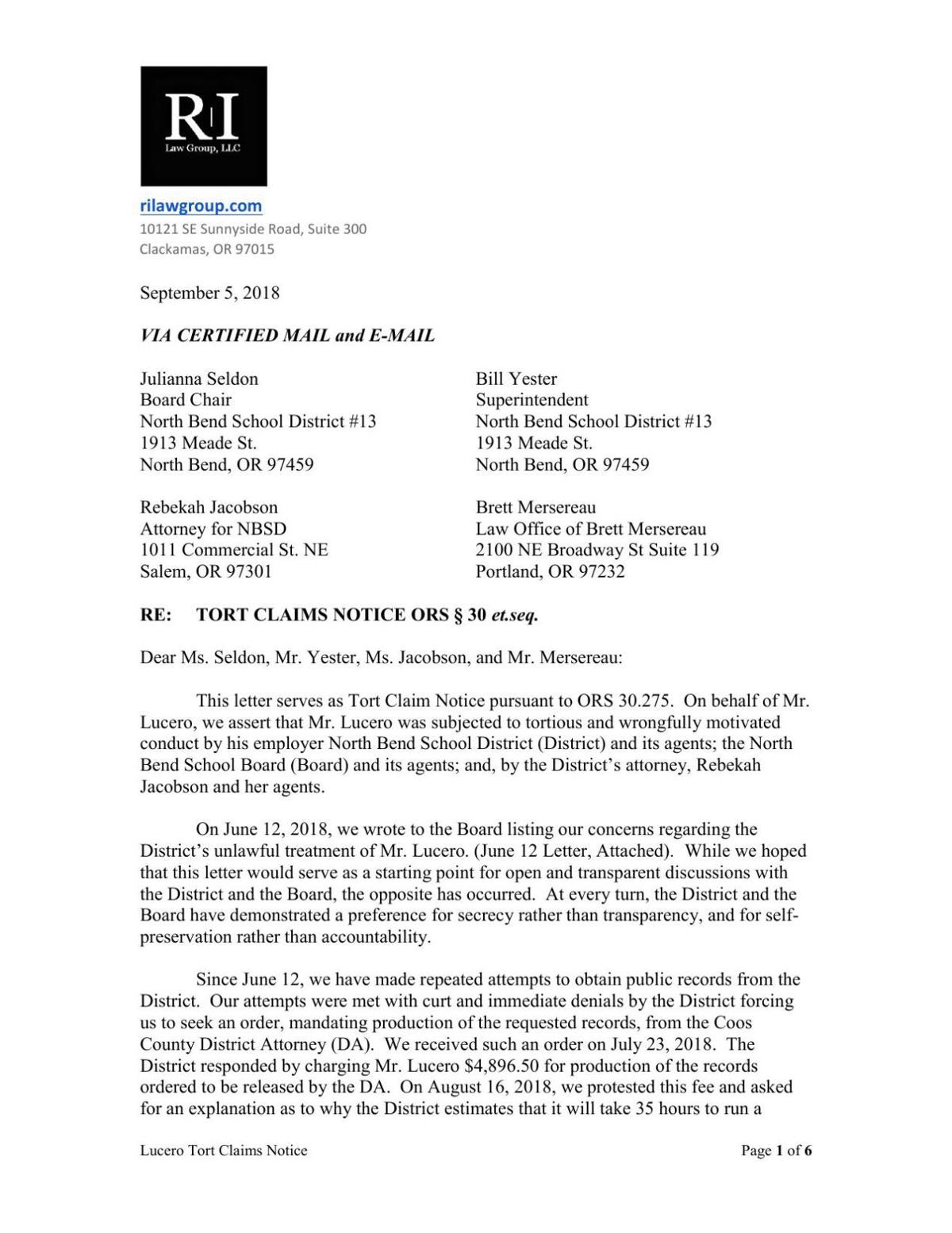 The tort claim, sent by the RI Law Group’s attorneys Roland Iparraguirre and Shannon Rickard, recalled attempts to receive public records from the district office. Some of the requests were upheld by Coos County District Attorney Paul Frasier, after which the district asked for nearly $5,000 in order to fill them.

“On August 16, 2018, we protested this fee and asked for an explanation as to why the District estimates that it will take 35 hours to run a search for records,” the tort claim read. “Not surprisingly, the District has still not responded to our ... letter.”

Because of this, the tort provided a list of grievances Lucero may possibly pursue in court. The tort first challenged the validity of the settlement agreement struck between the district and the American Civil Liberties Union of Oregon, questioning if Superintendent Bill Yester had the authority to sign the agreement without an official school board vote.

The World asked the district’s Communication Specialist Brad Bixler about this, who said he believes Yester has the authority to enter into contracts, as well as agreements.

“The board gives their employee, the superintendent, an ability to enter into contracts,” Bixler said. “That has been past practice and continues to be practice for not only our district but others throughout Oregon.”

In the tort claim, Iparraguirre and Rickard argue that “Oregon law prohibits a school board to reach any ‘outcome’ where a vote is required without an affirmative vote from the majority of Board members on the record during the public portion of a Board meeting.”

The tort claim also accuses the district of a breach of fiduciary duty and conflict of interest. It asserts that while the Oregon Department of Education investigated claims that included Lucero allegedly forcing a student to read the Bible as a form of punishment, Lucero was assured by the district’s attorney he would not lose his job at the high school.

It added that the attorney, Rebekah Jacobson, “knew that ODE’s legal action about the District was just getting started,” the claim read. “She also knew that the ACLU threatened severe action against the District if the District refused to punish Mr. Lucero and remove him as principal. Ms. Jacobson had two clients in the matter — the District and Mr. Lucero — and a clear conflict situation.”

The tort added that district officials also prohibited Lucero from speaking to the media.

“A fiduciary duty was owed to Mr. Lucero and it was breached,” the claim read.

The third accusation made in the claim is that the district targeted discipline, demotion without due process, and demotion in violation of contract. This portion of the tort claim argued that after Lucero admittedly had a student read the Bible, Yester “learned about this incident shortly after it occurred.”

“(Yester) did not voice any concerns about it until two-years later,” the claim read, stating that on April 18 of this year, “Yester disciplined Mr. Lucero ... by issuing a Letter of Reprimand warning that any additional violations may result in termination of employment.”

“By entering into the settlements with the ACLU to punish only Mr. Lucero, and then claiming its pleasure with that outcome, the District essentially confirmed the accusations against Mr. Lucero, thus irreparably and permanently damaging him,” the claim read.

The claim finishes by notifying the district that Lucero reserves the right to proceed against the district, board, and Jacobson and that he “gives notice of his intent to seek monetary and injunctive relief, punitive damages, attorney fees, and all other available remedies provided by law.”

It is undetermined how much money Lucero wants to see from the district.

The World is awaiting a response from the district on how much these efforts are costing taxpayers in attorney fees.

“The district is in a position to certainly respond to the claim, should it be picked up by the court,” Bixler said of the tort. “The district is continuing to work with legal counsel and will respond when needed.”

When The World called Iparraguirre, he said the RI Law Group is unable to comment on pending litigation.

“I’ve had a lot of parents call in their support,” Brooks said. “I didn’t realize how much support there was on this, so I appreciated that.”