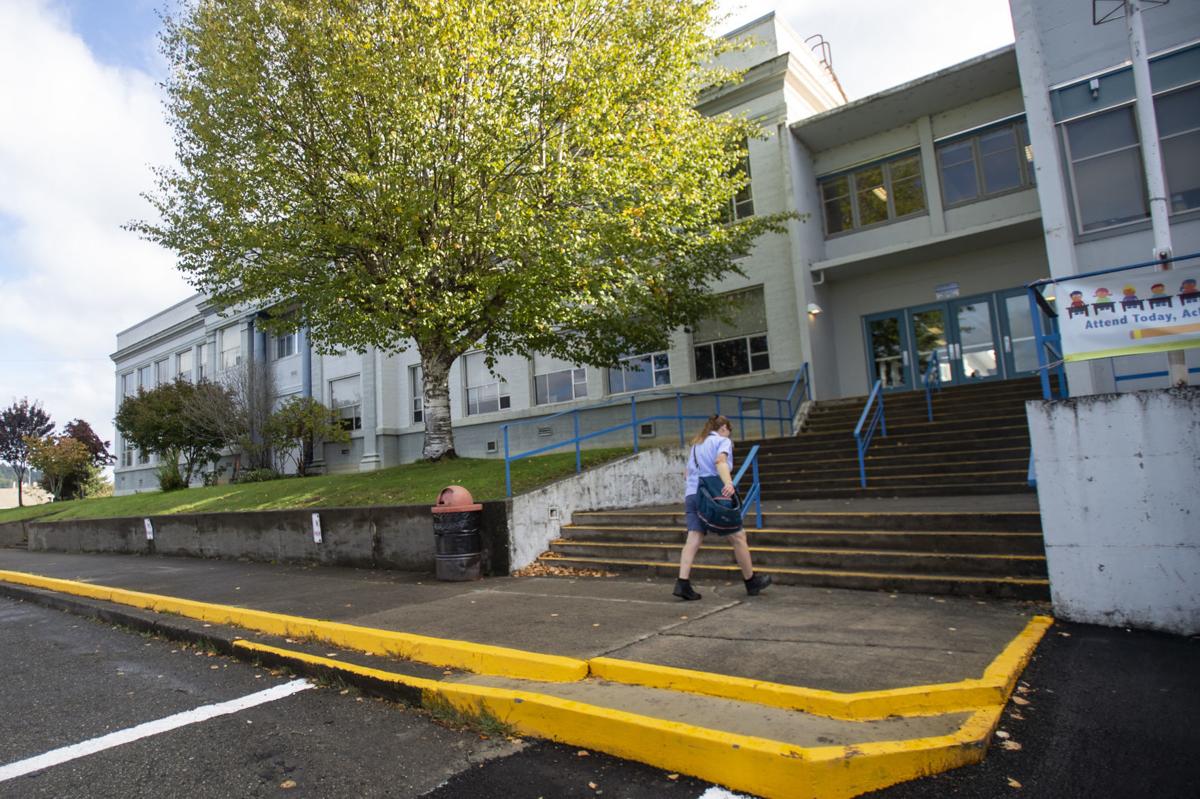 A mail carrier climbs the steps outside Myrtle Point High School where officials were forced to condemn a wing of the building, at left, when inspectors found creep cracks in walls and beams that would eventually lead to collapse. 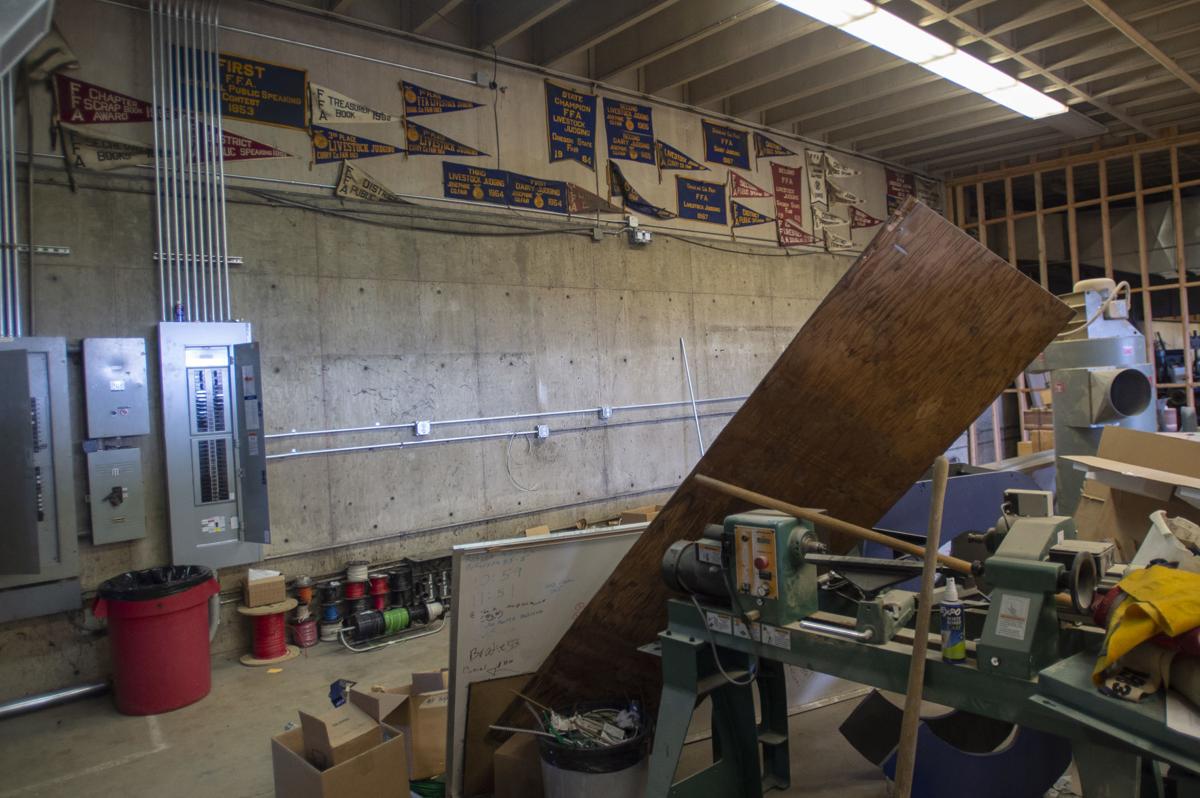 Awards dating back to the 1950s hang on a wall in a disheveled shop Friday at Myrtle Point High School. Inspectors recently found extensive structural damage from soil shifting under the adjacent high school, causing the district to condemn an entire wing of the building. 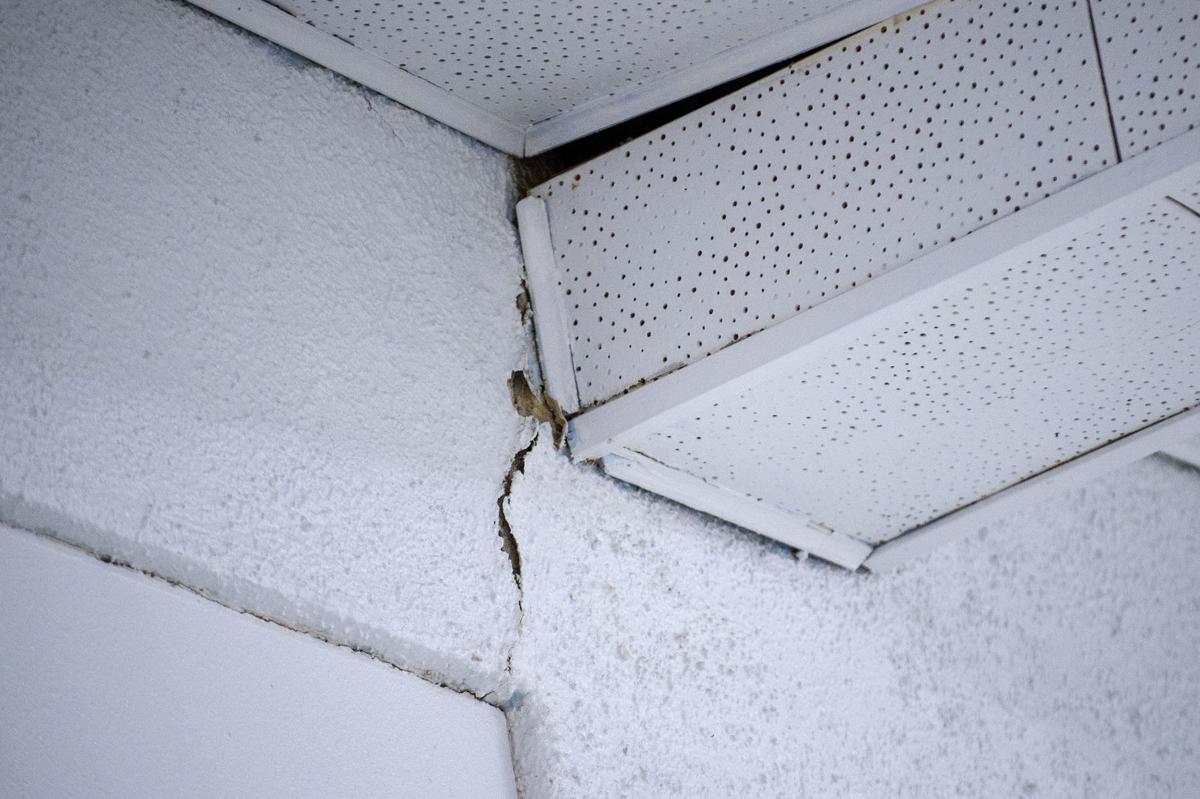 Cracks are visible around a beam in the ceiling of the cafeteria at Myrtle Point High School. 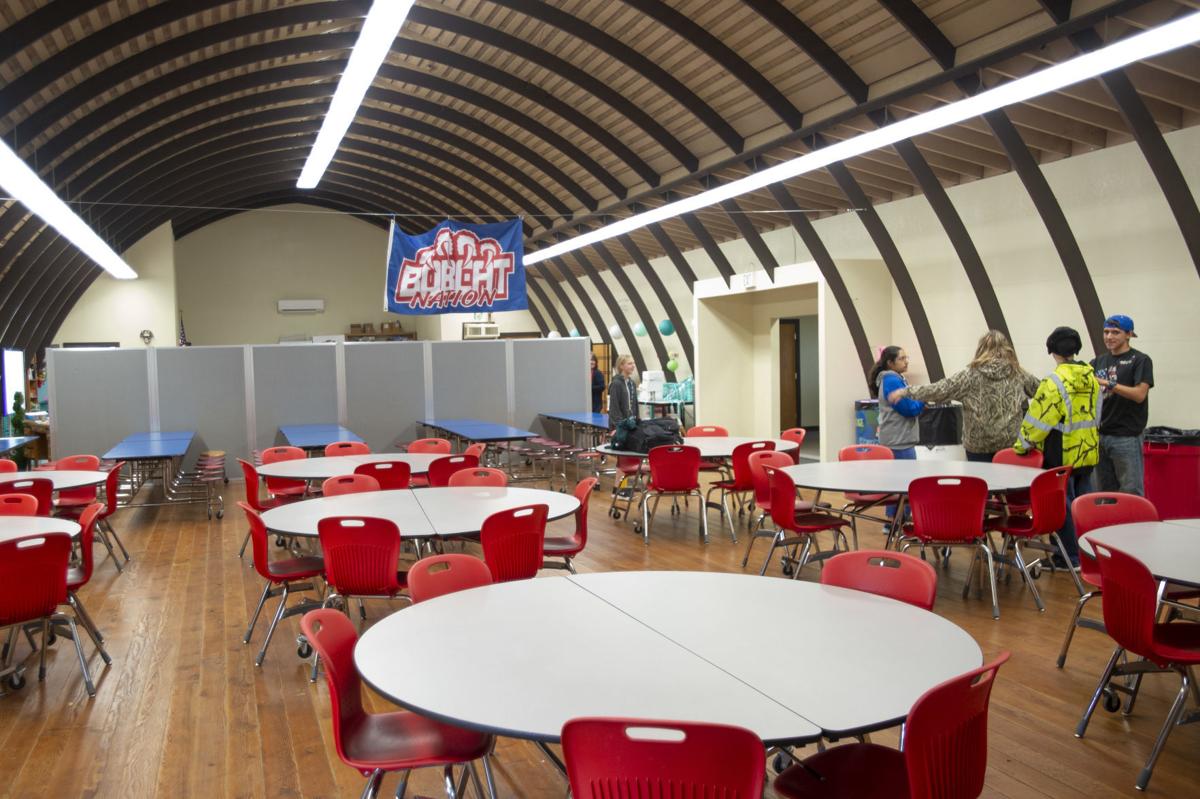 Students gather Friday in the Davenport Building at the Coos County Fairgrounds, which is serving as a temporary lunch room and classrooms for Myrtle Point High School. 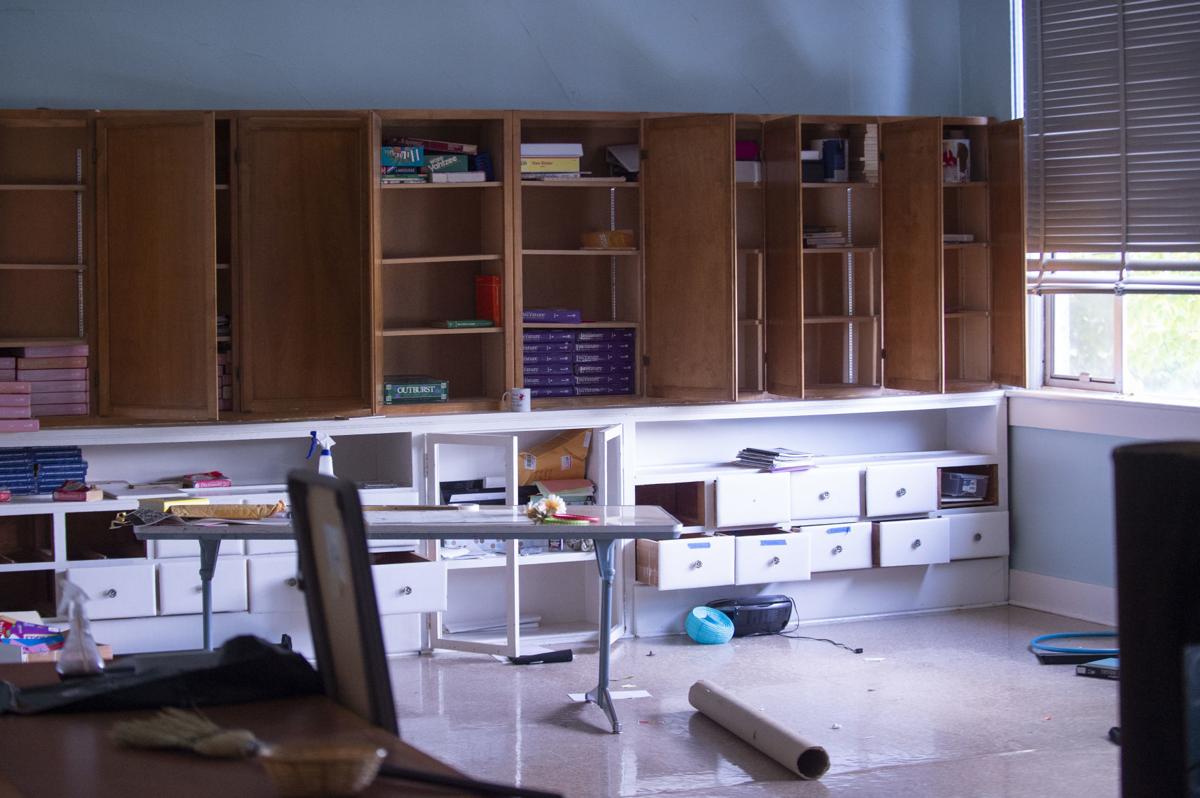 A mail carrier climbs the steps outside Myrtle Point High School where officials were forced to condemn a wing of the building, at left, when inspectors found creep cracks in walls and beams that would eventually lead to collapse.

Awards dating back to the 1950s hang on a wall in a disheveled shop Friday at Myrtle Point High School. Inspectors recently found extensive structural damage from soil shifting under the adjacent high school, causing the district to condemn an entire wing of the building.

Cracks are visible around a beam in the ceiling of the cafeteria at Myrtle Point High School.

Students gather Friday in the Davenport Building at the Coos County Fairgrounds, which is serving as a temporary lunch room and classrooms for Myrtle Point High School.

MYRTLE POINT — “Welcome to the 1920s,” said Kayli Fandel, principal of the Myrtle Point Junior and Senior High School as she opened the doors to the now-condemned half of the building.

The Myrtle Point School District has declared an emergency on a large portion of its high school building, located near the county fairgrounds. That part of the high school is the oldest in the district, built in 1925, and is now starting to crumble.

The crisis began on May 23, the day of the spring concert and two weeks before school ended for summer. Measurements were being taken by the one maintenance employee with the district for a possible new HVAC and other projects being planned in the old section of the school.

“That is when he noticed the cracks,” said Nanette Hagen, superintendent of the district.

The school district had already been aware that cracks existed in some places in the old portion of the building, but that day they were worse.

“And there were several new ones,” Hagen said. “The most were in the cafeteria, but then the more he looked he started noticing them in a few classrooms and in exterior walls.”

The most concerning of the cracks were in ceiling beams that help hold up the building inside the cafeteria. In fact, there were gaps where the beams were starting to separate from the walls.

The cracks were first noticed and put on the district’s radar in 2013 when it went for a seismic retrofit bond. A geologic study was done to see if the building was moving and the best place to put the bond dollars. The cracks were noted then and the retrofit done on the other half of the high school, which was added on in the 1950s, because the older school couldn't be retrofitted.

“When we noticed those cracks (again, on May 23), they were substantial to us and we canceled school the next day,” Hagen said. “We were afraid it would collapse.”

Initially, Hagen and others knew of quakes being reported off the coast of Bandon and weren’t sure if the worsening cracks had anything to do with the seismic shifting.

Hagen explained that because the district was already working with a firm to fix trusses under the elementary school, damaged by the February flooding, they brought in engineers from the same firm to check the cracks in the high school.

“They said the cracks in that portion of the building are ‘creep cracks’ and there is no fix for them,” Hagen said. “They would continue to grow until collapse.”

However, in a second report she said the statement was redacted and she isn’t sure why. She presented both reports to the school board, which said it wasn’t willing to make a judgment except to close that side of the building permanently.

Closing that part of the high school meant the junior and senior class lost its cafeteria, library, four classrooms, agriculture and wood shop.

Hagen spent the summer scrambling to find available space in the district and worked with the county commissioners, county legal counsel and the county’s maintenance department before ending up with a lease for the Davenport Building on the Coos County Fairgrounds, which was a suggested solution from a parent, according to Fandel.

“We’ve used that building before for classes when it was needed,” Fandel said.

In fact, the county signed a one-year lease with the district to use that building for just $1. The Davenport Building has room for three classrooms, including an area with a stage. Half of that room is now being used for the drama and English classes, while the other half is now a cafeteria.

Just this week, Hagen learned that Ken Ware Dealership in Coos Bay donated an SUV for the district to transport food back and forth. Until that donation, employees had been using their personal vehicles to do the transportation.

Finally, the Davenport Building had no functional heat, so the district added both heat and ventilation.

“We already had a three-year plan to move our wood shop over to the building at the end of the football field where metal shop already is, but now it is sped up,” Hagen said.

But to make this happen meant replacing an exterior wall that was rotten and collapsing. It meant putting up a firewall between the wood shop space and classrooms and work on the HVAC system.

“We also had to do extensive electrical work,” she said, since moving the wood shop and agriculture meant doubling the electricity load to that building. “It is nearly $300,000 we’re putting into that facility. We put capital dollars away and this takes a bigger precedence. The endgame for that building is for it to be a beautiful facility and have industry-level experience.”

Principal Fandel pointed out that building now has all three of the district’s Career and Technical Education programs and will remain the permanent home for each.

Meanwhile, the library has been moved to a building below the stadium.

Right now, Hagen said the district is still in Phase One of dealing with the crisis, which was evacuating and finding new homes for programs and classes. Phase Two is to demolish the 1925 portion of the Myrtle Point Junior and Senior High School. Hagen is committed to writing a technical assistance grant to the state to get facilities planning money. This would bring someone in who can look at the situation and what the plan would be in the long haul.

Until then, the anticipated cost for demolition and asbestos abatement is around $300,000.

The day that school was canceled, teachers were allowed back in to take what materials they needed from their classrooms and set up in temporary locations.

“We were mostly moved out of there in three hours,” Fandel said. “They divided and helped each other out and spent the rest of the day setting up classroom space.”

Another question was whether or not to allow students to empty out their lockers, but Hagen knew that doing so wouldn’t send a “safe message” by letting students in a condemned building to gather their belongings.

“We took trash bags with numbers and emptied the lockers and put the bags in the gym,” Hagen said.

When students returned to school after the cracks were found, an assembly was held to explain that things were going to be a little different.

“We put posters on the walls for kids to see where they can go for their classes,” Fandel said.

When Fandel opened the condemned doors on a recent visit, tables were upended in the hallway, classrooms stacked with boxes of items that weren’t needed immediately or were too cumbersome to carry. In the old drama room, googly eyes on the wall — put there as a prank, Fandel said — stared out over the crates and items left behind on the floor, forgotten while people hurried.

Fandel picked up one of the prop brooms and placed it on a table.

“We have a lot of stuff still in the building,” Hagen said. “It’s like people who put their things in storage and don’t see their stuff for two years — do you really need it?”

Hagen plans on the district holding a community sale to get rid of some of the items, while the rest will eventually be placed into storage at the Maple Schoolhouse.

As to why the cracks progressed, it is still a mystery. Hagen said it is now believed to have been caused by a change in soil composition, which means the building damage is not covered by insurance.

“The earthquake is unlikely, but we also had a lot of rain, so it could be a number of things,” she said. “The building is 100 years old. It is the oldest building in the district.”

The school district’s biggest financial hurdle is its existing bond for seismic retrofit.

The bond, which cost $4.61 per $1,000 of assessed property value, doesn’t end until 2032, restricting the district in what it can ask for in the future. As it is, the district sold off property at the start of the year to get rid of some debt.

Hagen has discovered a potential for local companies to partner with the district and assume some of its debt in exchange for tax credit, but nothing has been finalized.

To better understand what a new junior and senior high school would look like, Hagen plans on assembling a community committee to get input on what the community itself would like to see.

But until then, “it’s like being a triage nurse and we need to stop the bleeding and start school.”

Now that school as begun again, Fandel said kids have been dealing with the changes well. The steep hill leading to the fairgrounds “is good for some hamstrings,” Fandel laughed.

The Davenport Building has also been decorated for the new school year, given a new coat of paint and the carpets were cleaned.

“The city also put in a crosswalk in front of the school so kids have a safe way to get across the street,” Fandel said.

When asked if the damage to the 1925 portion could happen to the newer part of the high school, Hagen said no.

“Seismic upgrades put new concrete walls into the soil on the newer side,” she said. “Outside my role as superintendent, I’ve always been a facilities manager so I’ve been savvy on facilities but not to the degree of implementing bonds and to the point that we might need to lose a building. I’m thankful I have that previous experience, but it doesn’t prepare you for something of this magnitude.”

Hagen expressed appreciation for Umpqua Sheet Metal, Kyle Electric, and Backman Construction for helping the district through the crisis.

A look at this week’s games