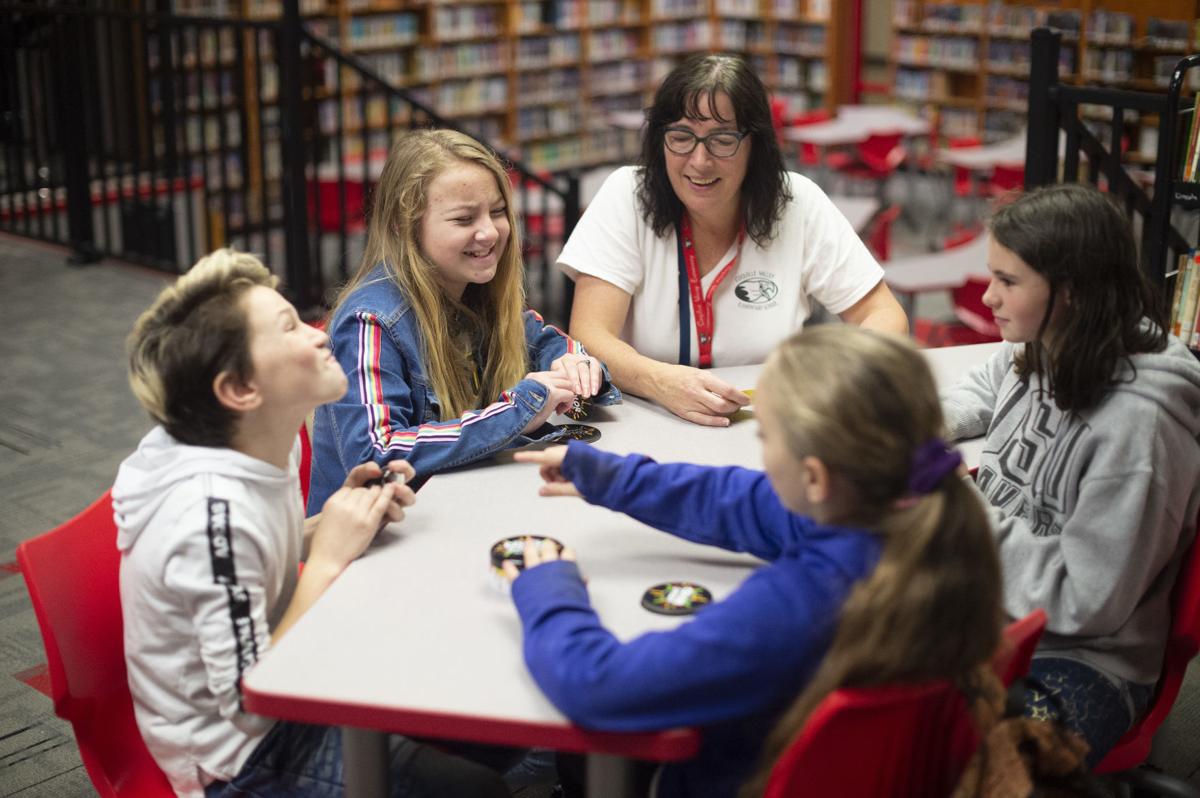 Students in the after-school Plus Program from left: Kyler Daugherty, Paige Perez, Kaylann Williams and Stephanie Benninghoven play a game Dec. 17 with Michele Bullington in the library at Coquille Valley Elementary School. 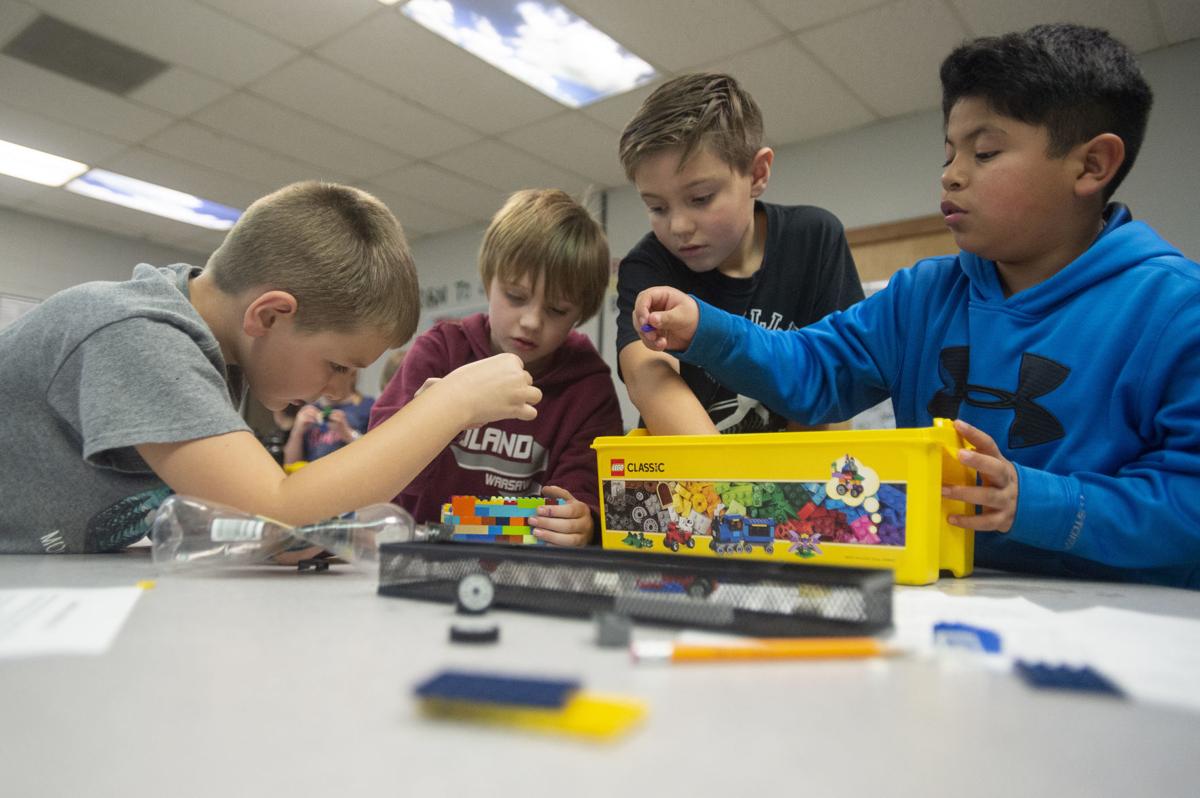 From left: Easton Nowotny, Blake Yeager, Evin Olsen and Adwin Indalecio work on a science exercise in the after-school Plus Program at Coquille Valley Elementary School on Dec. 17. 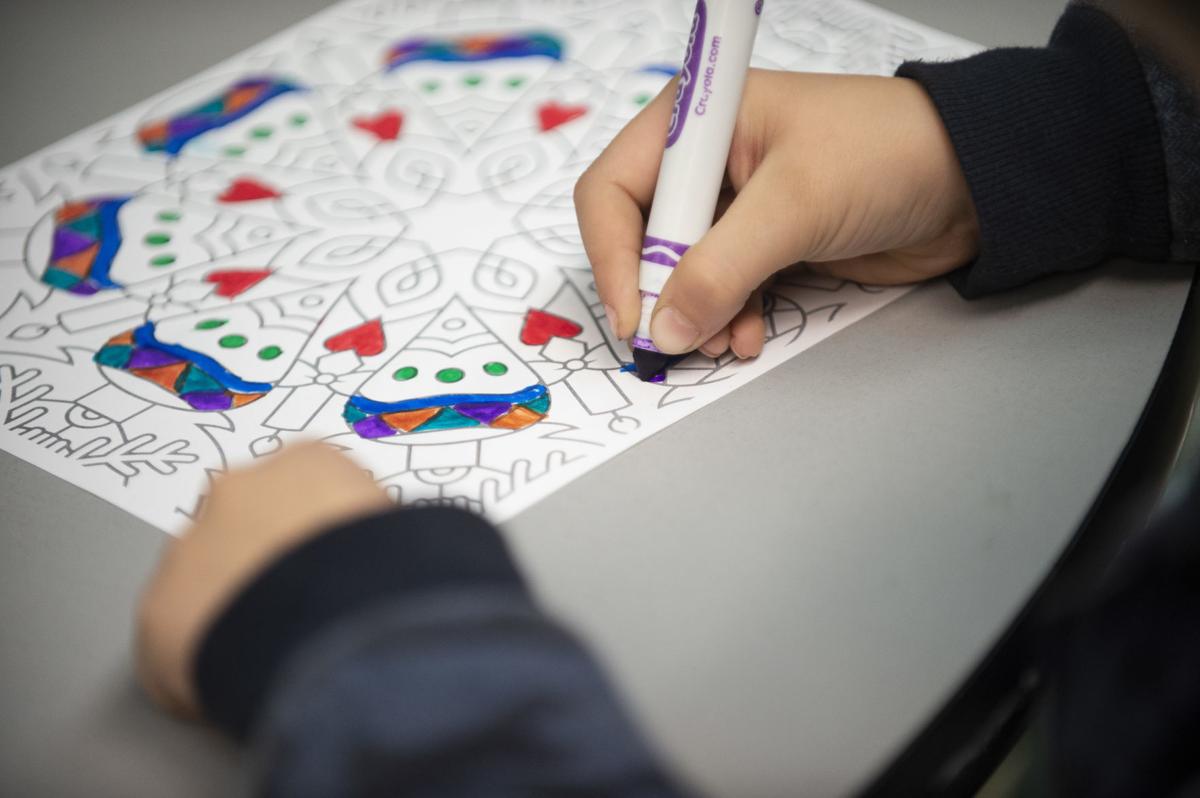 A student colors in the after-school Plus Program at Coquille Valley Elementary School on Dec. 17.

Coquille Valley Elementary School Principal Geoff Wetherell brainstormed the idea after seeing that CSD, like most districts, has plenty of extracurricular activities for athletic students but lacked other opportunities for the rest of the children. To remedy this, he pitched the idea for the Plus Program to Superintendent Tim Sweeney.

From left: Easton Nowotny, Blake Yeager, Evin Olsen and Adwin Indalecio work on a science exercise in the after-school Plus Program at Coquill…

“We looked into developing an after-school program for elementary kids that offered games and exercise, but also had academic support components, robotics and technology,” Wetherell said.

The Plus Program gives teachers the chance to email program leaders notes on what they are working on in the classroom and identify students that might need extra tutoring.

“If a grade level is struggling with a concept, they let the Plus Program staff know so they can work with them in the first half hour,” Wetherell said. “We also use it as a place where kids can get general homework help. Some groups of kids come to finish their homework and others to firm up their skills.”

The after-school program runs for an hour and a half on Tuesdays and Thursdays, overseen by six teachers and two educational assistants.

When it first began, Sweeney said it was paid for by stipends out of the general fund, with buses running students back home in only two parts of town. Now, buses bring students home wherever they live and the program received a $60,000 grant from the Oregon Community Foundation to expand the program from first grade to sixth grade to include students in seventh and eighth grade.

“It’s really become one of the most dynamic programs that the Coquille School District does,” Sweeney said. “It’s free to students. Parents love it. It’s amazing how it has gone from a handful of students to one of the biggest events we have on a weekly basis in the district.”

Since it started, Wetherell said it has increased overall student attendance at school during regular hours.

A student colors in the after-school Plus Program at Coquille Valley Elementary School on Dec. 17.

“Those who are in the program tend to come to school on the days of the Plus Program,” he said. “We have chronic absenteeism like most schools in the county, but we found that this was something that got kids to want to be in school because they didn’t want to miss the program or their friends who are in it too. It got them excited about school again.”

According to Sweeney, on top of the academic help, the program also has giant Jenga games and Connect 4 games.

“That has helped in numerous ways for social skills and social development,” Sweeney said. “Kids today play games on their phones and don’t often play board games together, so to have that interaction and communication with other people is important.”

For Sweeney, he said it’s been fun to watch the Plus Program grow.

“It’s nice that we can create programs that are important to parents,” he said. “It shows we’re listening to the community and creating things they need instead of guessing at what they need.”

When Wetherell sees the school full of students at 4 p.m., “I smile every time.”

“It’s awesome they’re choosing to stay at school longer, that we’ve created an environment where kids want to stay after school,” he said. “We’re pretty proud of that.”

“We looked into developing an after-school program for elementary kids that offered games and exercise, but also had academic support components, robotics and technology.” - Geoff Wetherell

Coos County Circuit Court Judge Martin Stone granted a summary judgment in favor of Rob Taylor, who sued the city of Bandon for acting outside of its charter by increasing water and sewer rates.