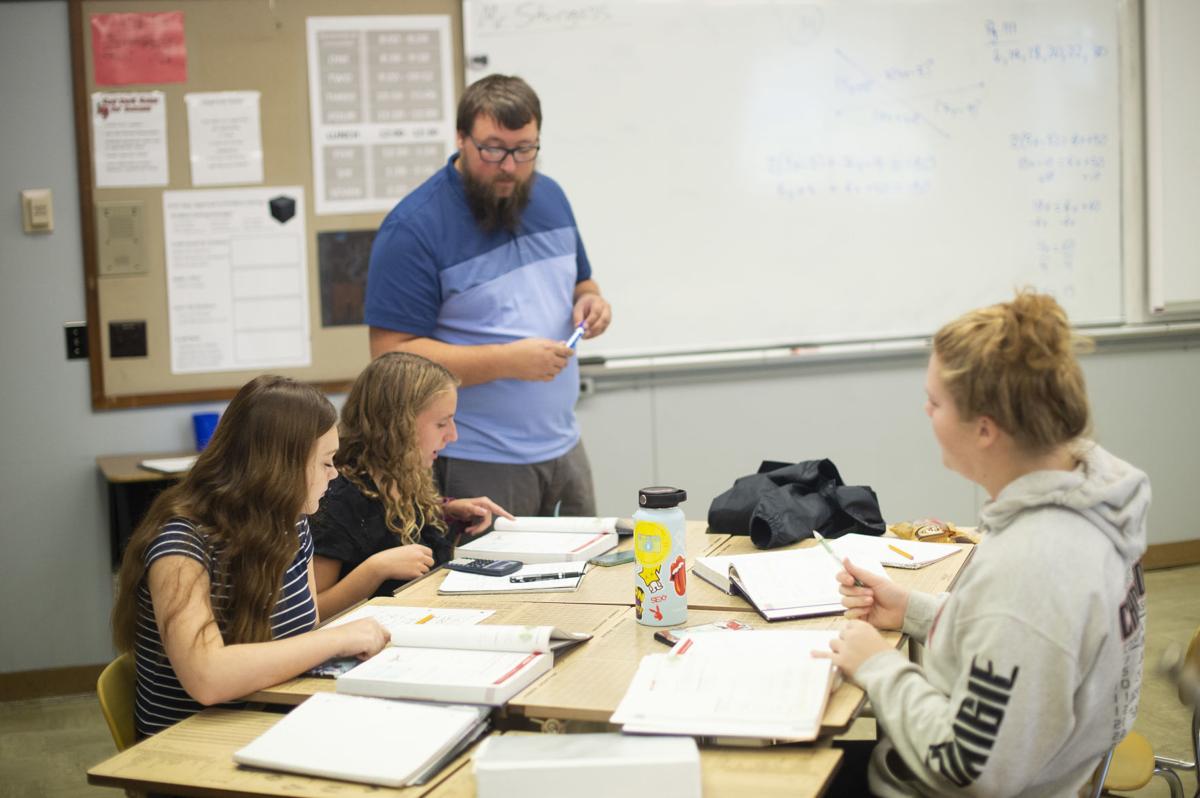 Algebra and geometry teacher Kory Sturgess works on a problem with students in his classroom Tuesday at Coquille High School. Sturgess started with the district this year. 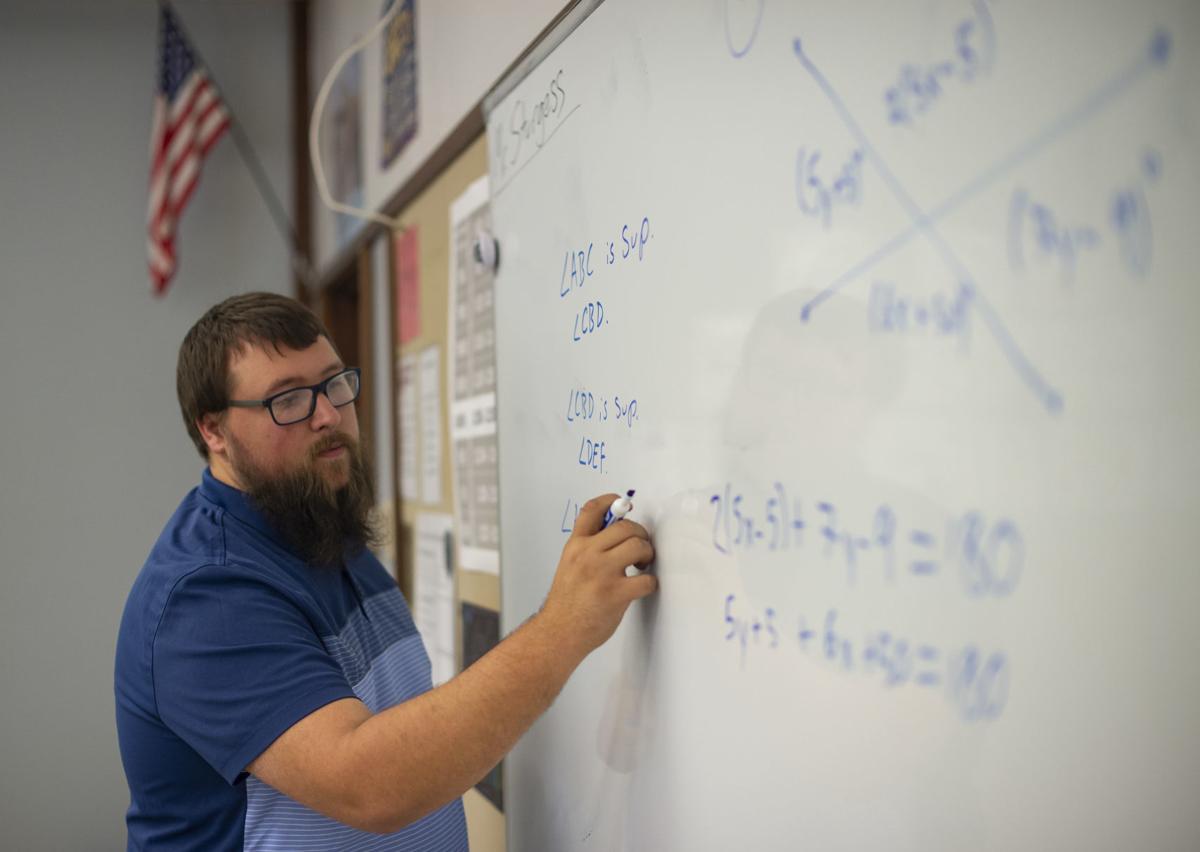 Algebra and geometry teacher Kory Sturgess works on a problem with students in his classroom Tuesday at Coquille High School. 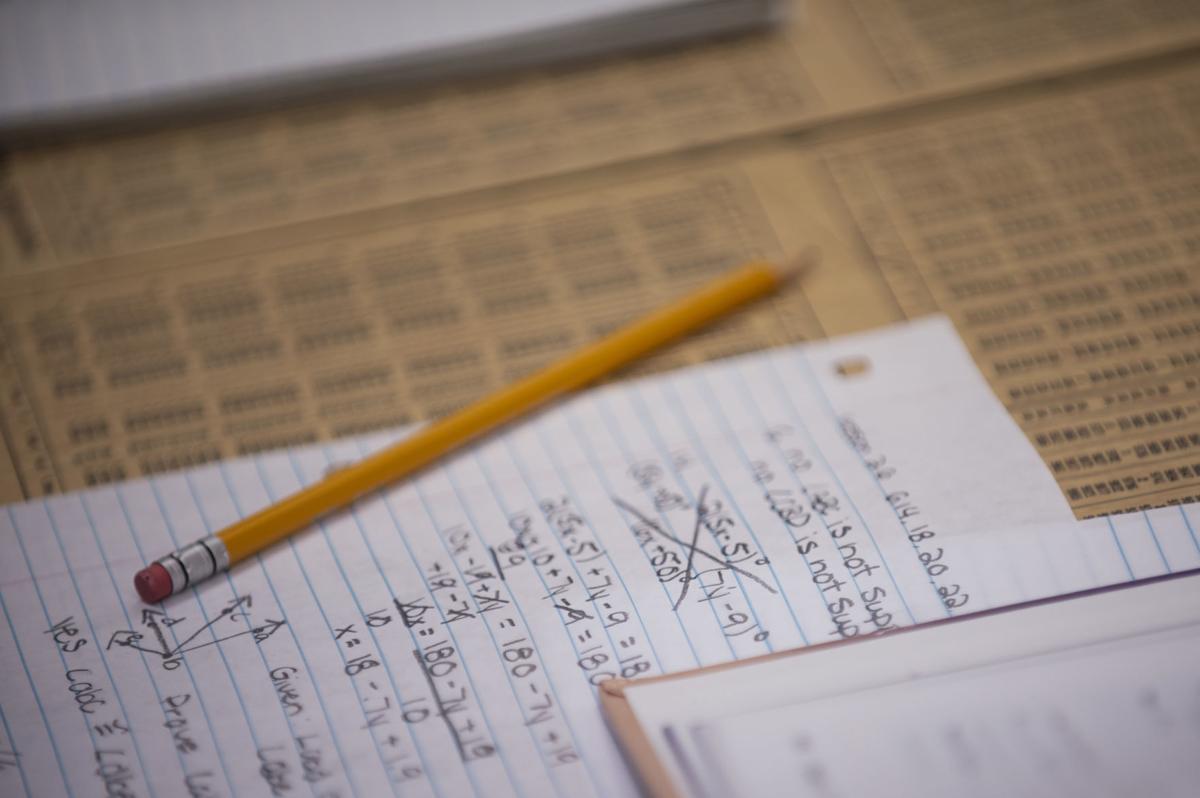 A student's math work on a desk Tuesday at Coquille High School. 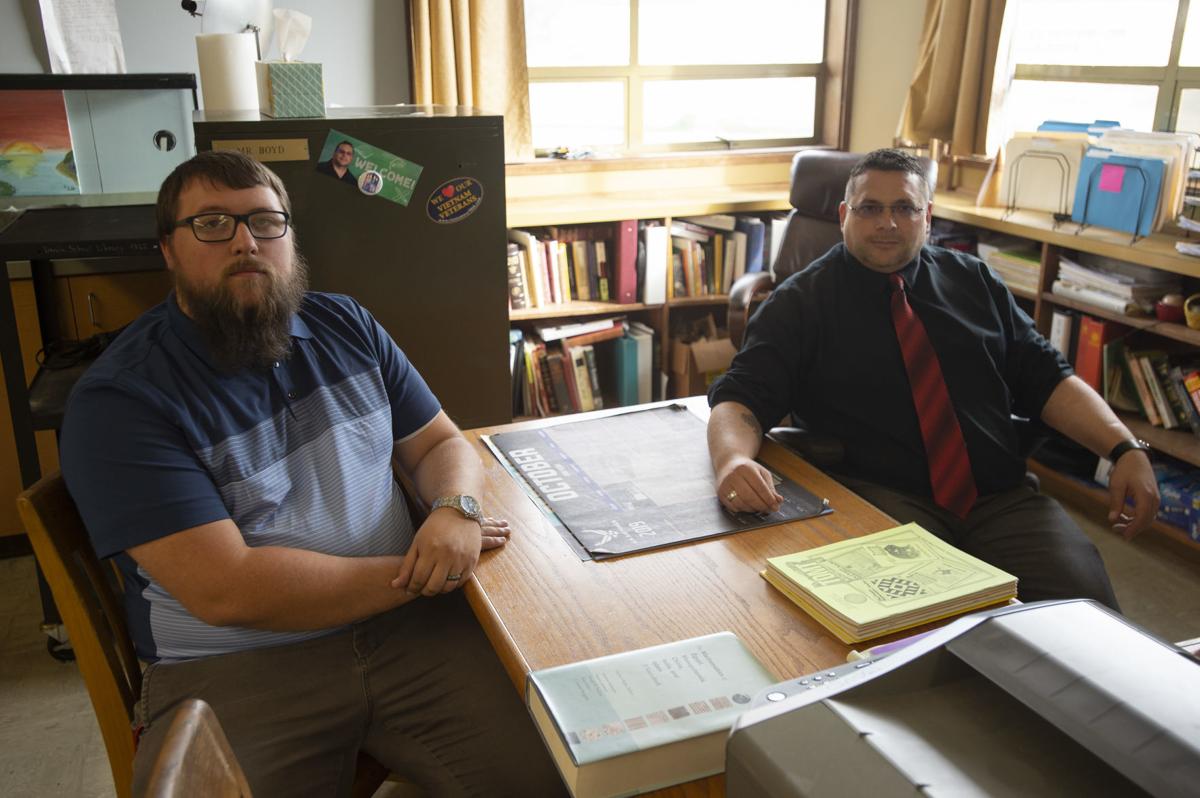 Math teachers Kory Sturgess, left, and Shane Boyd are taking a new approach to teaching math, hoping to reach students at all ability levels by using critical thinking skills instead of memorization.

Algebra and geometry teacher Kory Sturgess works on a problem with students in his classroom Tuesday at Coquille High School. Sturgess started with the district this year.

Algebra and geometry teacher Kory Sturgess works on a problem with students in his classroom Tuesday at Coquille High School.

A student's math work on a desk Tuesday at Coquille High School.

Math teachers Kory Sturgess, left, and Shane Boyd are taking a new approach to teaching math, hoping to reach students at all ability levels by using critical thinking skills instead of memorization.

COQUILLE — In math classes at Coquille Junior and Senior High School, it is less about memorizing algorithms and more about critical thinking.

The new method of teaching began last year when teacher Shane Boyd attended the Northwest Mathematics Conference, put on by the National Council of Teachers of Mathematics.

“I have over 100 students a day, over 100 personalities, and teach to all ability levels, so figuring out how to teach kids so they will understand is incredibly complicated,” Boyd said of his four classes, which are principles of geometry, applied technical math, algebra 2 and a pre-calculus course.

In order to reach every student, he picked up a teaching technique introduced at last year’s conference created by Peter Liljedahl after 15 years of research.

“What he did, instead of looking at how students think to create curriculum, he looked at 40 high-functioning classrooms in Canada and took out furniture for a week to see how students would react,” Boyd said.

Though his classroom still has furniture for students, because he didn’t take on everything Liljedahl suggests, he did take on something else. Now, whiteboards line every available space of wall in his classroom.

“I randomly put students in groups of three, which seems to work best, and students are assigned a table and a board,” he said. “They are presented with a challenging problem … and students try to solve it on the board so I can see what they’re doing.”

Students only have one marker, which makes them discuss how to solve the problem together, and doing it on the board allows Boyd to step in if he sees them making a mistake.

“That way, I can stop them from forming bad mathematical habits,” he said.

When all students are where he wants them to be with the problem, they gather at one board not being used and talk about the different ways people solved it, followed by a mini-lecture before going on to the next problem.

“It is engaging students in mathematics rather than having them sit and passively absorb the information,” Boyd said.

Boyd and the other math teacher at the school district went back to the Northwest Mathematics Conference last weekend and brought back even more ideas on how to make math more easily understood by students.

For the high school’s new algebra and geometry teacher, Kory Sturgess, he took with him from the conference the idea of using storytelling in math.

“The presenter talked about how he was never really good at math and remembered stories more than math,” Sturgess said. “So stories stick with students, which can be used to help them remember the math connection.”

One example he used was Greek mythology, a society steeped in mathematics. He pointed out that much of the mythologies included forms of mathematics. In one Herculean myth, the demi-god fought Grecian giant Antieus, who doubled in strength whenever he touched the ground.

“Using that idea from a historical standpoint, we can bring the math out of it,” Sturgess said.

For Boyd, he left the conference last weekend with another innovative idea using debate in math.

“A debate teacher taught how one math practice is constructing arguments and critiquing arguments in others,” he said. “That’s one technique I’m introducing a little more this year. I want students to address each other’s arguments where students debate one another’s reasoning.”

One example of this is asking the class how many squares are in a chess board. Though the answer is 64, Boyd requires classroom consensus on the answer.

“It is visually complex to figure out where the squares are,” he said. “It can also be extended by asking how many rectangles are in a chess board.”

Overall, mathematics and even other courses are becoming more and more inter-disciplinary, Boyd explained.

“It’s teaching logic, teaching reasoning, teaching argument construction and critical thinking,” Boyd said. “In all of our subjects, we want to teach students how to think, not what to think. If we can get across that mathematics is a human endeavor, a creative endeavor, not just memorize and crush numbers, we reach more students.”

Stand-up comedians are coming to town to help raise money for suicide prevention.

Take a trip down memory lane in the The World Newspaper archives!