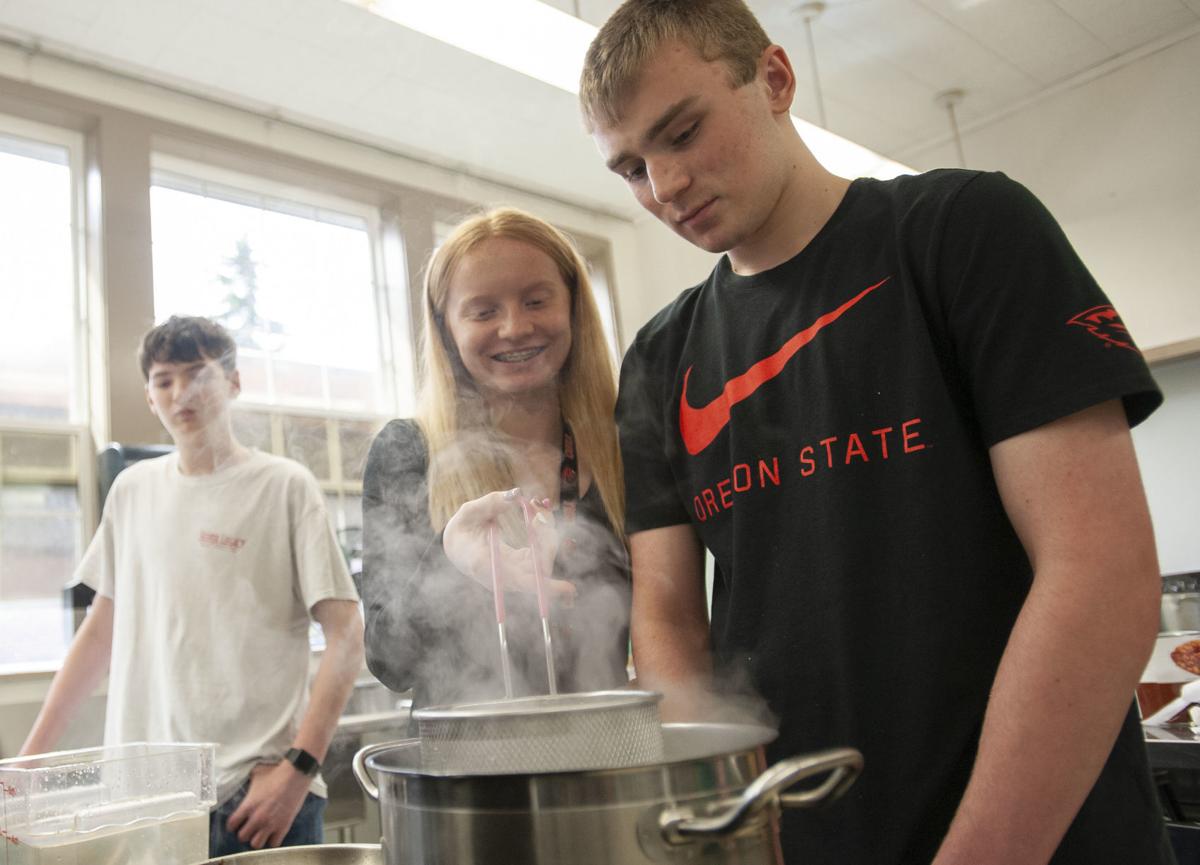 Aby Holling and Brady Messner learn to blanch vegetables Friday during a culinary class at North Bend High School. The class, taught by Chef Mark Murphy, is one of several Career and Technical Education classes available to students at the school. 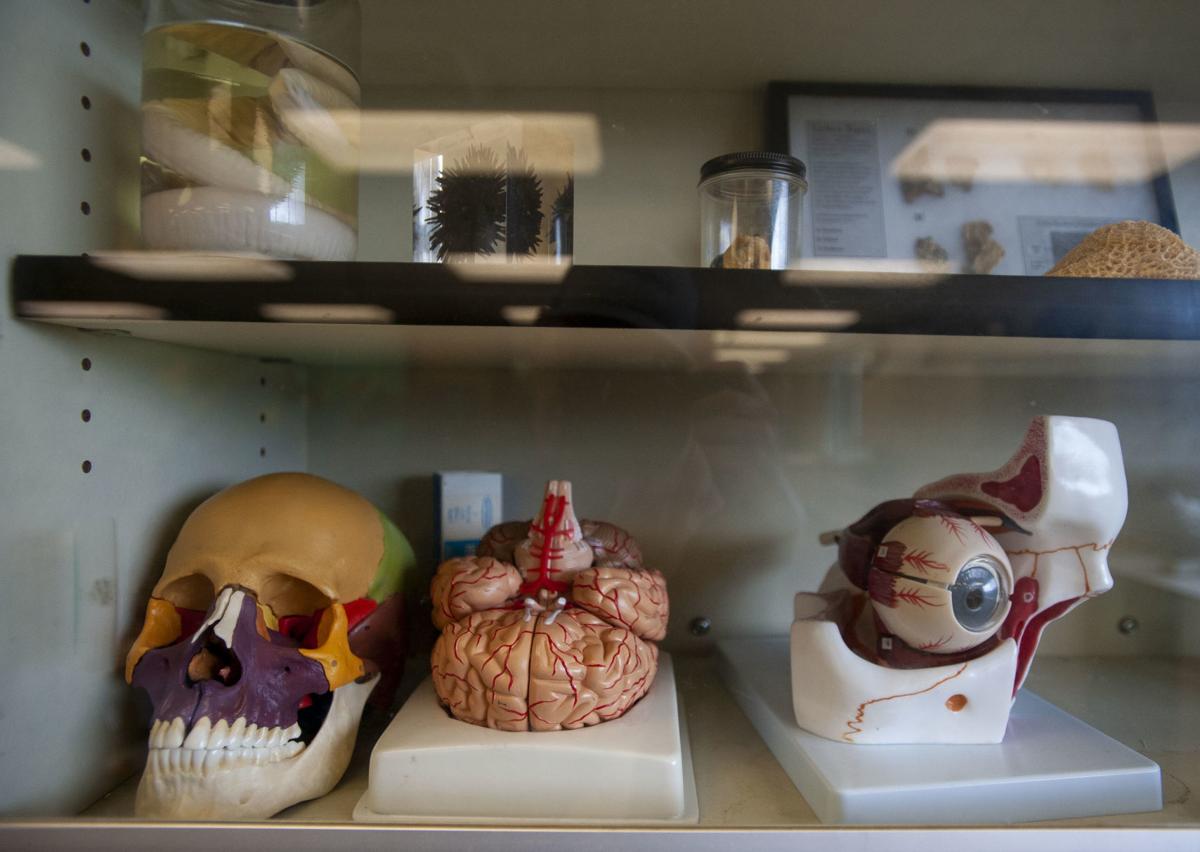 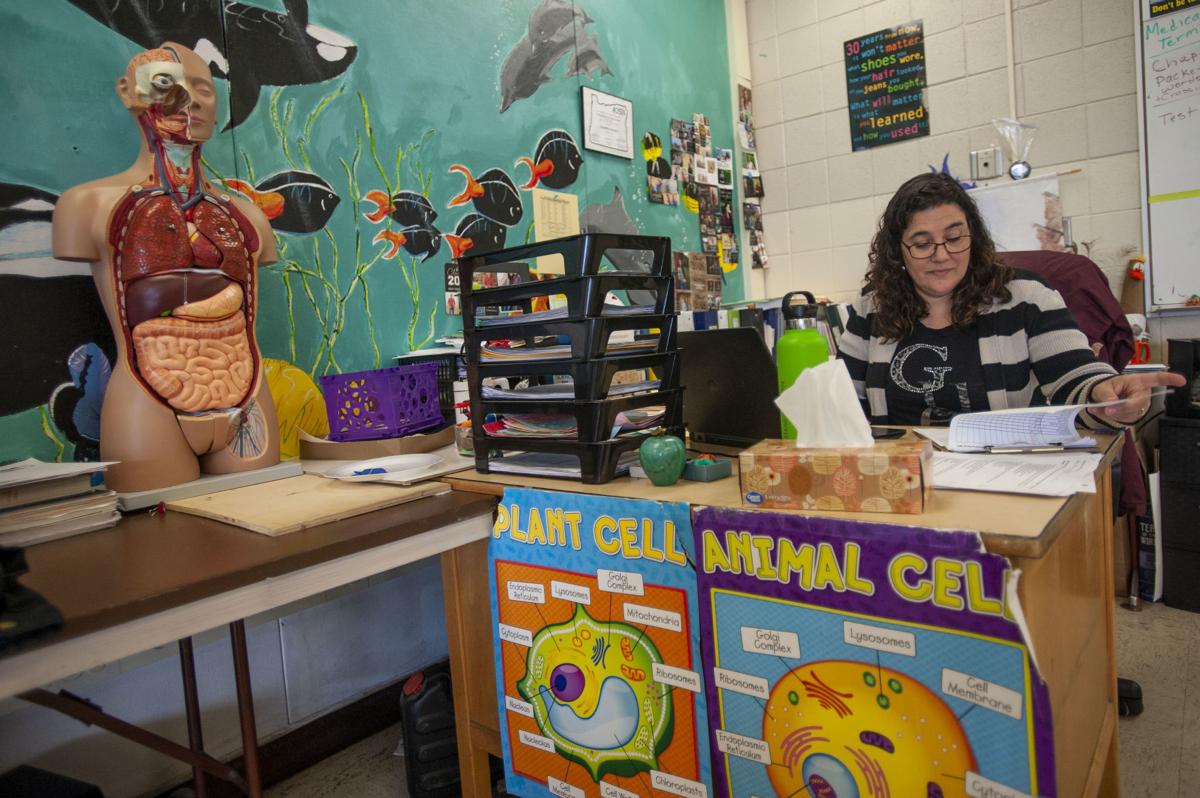 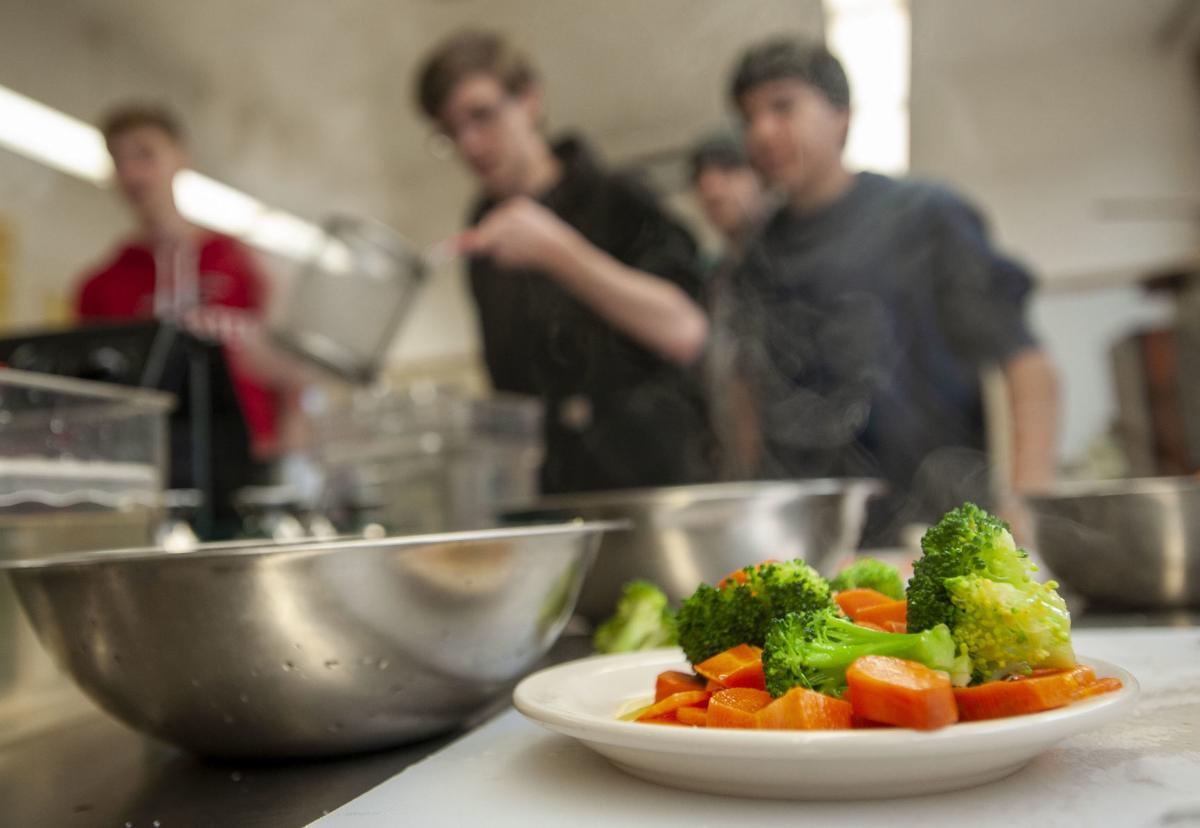 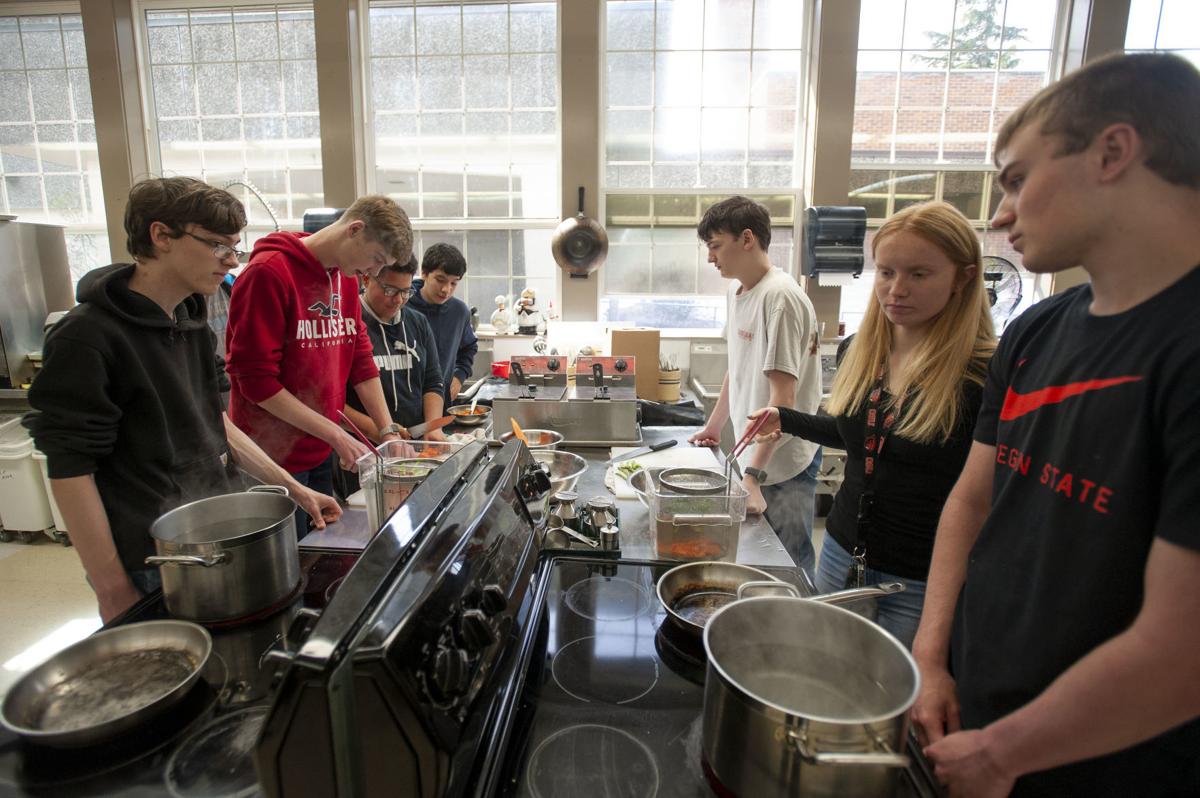 NORTH BEND — Inside North Bend High School, a culture of teamwork is fueling the Career and Technical Education classes.

In fact, working together to complete projects is a common scene at the home of the Bulldogs. If the drama teacher needs shirts for the Peter Pan play, graphic design teacher Katie Kennedy puts her students on the design that later gets sent to Joanna Goslin’s business students to put the image on T-shirts.

“They work together all the time,” said Jake Smith, NBHS vice principal. “Every Wednesday, the CTE teachers get together. A lot of it is brainstorming where everyone comes up with ideas. When there’s one person and one idea, it’s hard to make it come to fruition, but when everybody is involved it creates a storm of energy where the ideas can happen.”

The uniqueness seen in CTE programs not only produces great ideas, but great work experience for students as they see firsthand how projects are completed in the real world.

Because the North Bend School District’s CTE programs have been continuously successful over the past few years, the district has been in the state’s top three percent in terms of receiving money for the program. NBHS sees $160,000 a year for its CTE classes due to the amount of “completers” reported to the state from the school.

“Last year, the only school that received more money than us was Redmond Proficiency Academy,” Smith said.

Before the state established Measure 98 funds, CTE teachers competed for money to fund their programs.

“In the past before the career pathways money existed, the $15,000 allotted to districts was the only thing to fuel our programs other than the district budget which wasn’t big,” Smith said. “So if the goal of our state congress was to bolster our CTE classes with career pathway, it worked. We can say that here, it worked. It totally changed our CTE programs in the last four years.”

For the seven CTE classes offered at NBHS, all have just over 100 students enrolled. In a school with 800 students, Smith said it is impressive.

“These all get students ready for the business world,” she said.

“This is intro to healthcare, geared for people who want to go into medicine, so anyone interested in becoming a medical assistant or a surgeon,” Hampel said. “It gets students points on nursing applications, but also gives students a certificate at the end that says they completed these courses and can get them an entry-level job in something like phlebotomy.”

She also has a local butcher who donates animal hearts, eyes and lungs for her students to dissect, while the class recently received a grant to purchase new microscopes that are shared with the other science classes at the school.

Hampel said by the end of the month, her students will also have a chance to study anatomical surgeries on the human body through a virtual reality headset.

There is also Jeff Hagar’s metal shop class, where students learn about the different forms of welding and fabrication, and Garrett Holmes’ popular new construction classes that will move into the new trade building later this month.

Though every school district has CTE programs that feature a variety of classes, NBHS boasts of a camaraderie between its teachers and students not seen elsewhere. Kennedy said that the decision to create this culture started roughly six years ago.

“We decided we would work together as much as possible because we’re all CTE and it is best for the kids,” Murphy said. “For example, it would be easy for me when I order shirts to have them designed by the company that made them, but instead they are sent to our design class and I’ll get an invoice from them. We help each other all the time and the kids should see that. The kids should see us not fighting over stuff, but how you’re supposed to work.”

As Murphy explained it, this CTE culture gives students an example for how real world businesses operate. It also shows students that a certain quality is expected in what they produce.

“We’re on the kids about being on time and how to behave when they’re out and dealing with customers, how they can’t be on their phones,” Murphy said. “In here, it’s teamwork. They don’t get to pick their team because in real life, you don’t pick who you work with. Sometimes they come crying, saying so-and-so doesn’t want to be their friend, but that’s life. A lot of times they may not be best of friends in the end, but can tolerate each other.”

Goslin said that her marketing students have a project where they choose something on campus to promote, such as the chess club or getting other students to watch tennis matches. To do this, students will make posters and work with Kennedy’s graphic design class to come up with art for t-shirts.

“Last term, students had it where if you came early to the basketball games, there were t-shirt giveaways to help more people show up,” Goslin said. “Their work is not an assignment that I give, but something that another teacher wants. If we show the work to the client and they don’t like it, they have to go back and make changes. It is real world where the client doesn’t like it, so fix it, but in a safe place where they don’t get fired.”

Not only that, but when her students make a t-shirt, she will ask if they think it is good enough for their friends to wear on campus.

Likewise, Murphy has seen his students work harder and take more pride in what they cook when it’s for the Booster Club or another event rather than something they just make in class.

“I think our school is successful with these classes because our administration has given us the freedom to think big,” Goslin said. “They trust us.”

But for Smith, trusting the CTE teachers and seeing the resulting success is a big source of pride for the district.

“These classes exist because kids want to take them,” he said. “Teachers come up with an idea for a class and we put it in the forecasting guide and if kids don’t sign up, they don’t exist, but sometimes it becomes the next biggest thing… Each teacher has to be their own promoter and they’ve done a good job.”

Exquisitely professional thoughts. I merely hit upon this web site and desired to enunciate that I've definitely delighted in reckoning your blog articles or blog posts. Rest assured I'll subsist pledging to your RSS and I wish you write-up after much more shortly

The Technical classes are really a good step. I am very excited to get best dissertation service and to join this class. These types of classes help us in our daily life. These type of classes makes us practical.