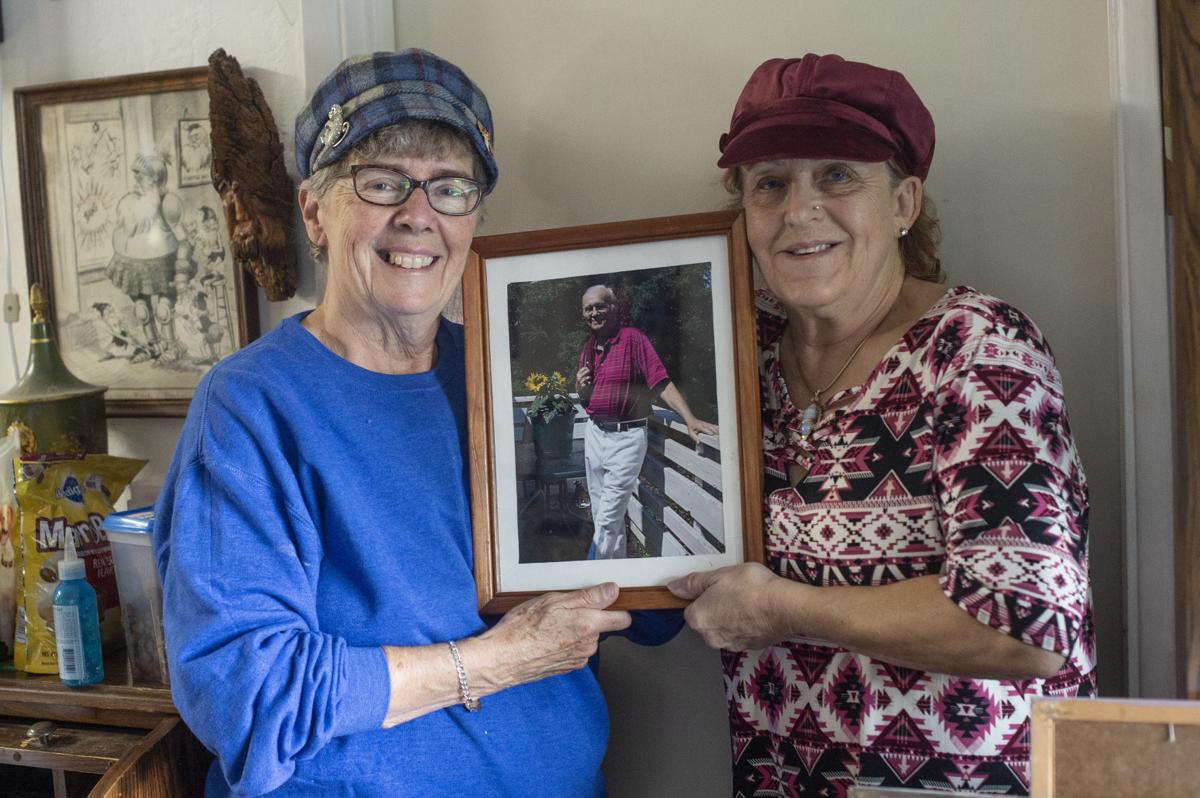 Conniejo Prentice, right, holds a photo of her late husband, Irwin, alongside her daughter Jenny Bingham at Prentice's home Thursday in Coos Bay. "Irv" served in the U.S. Merchant Marines during WWII and died recently at 96. 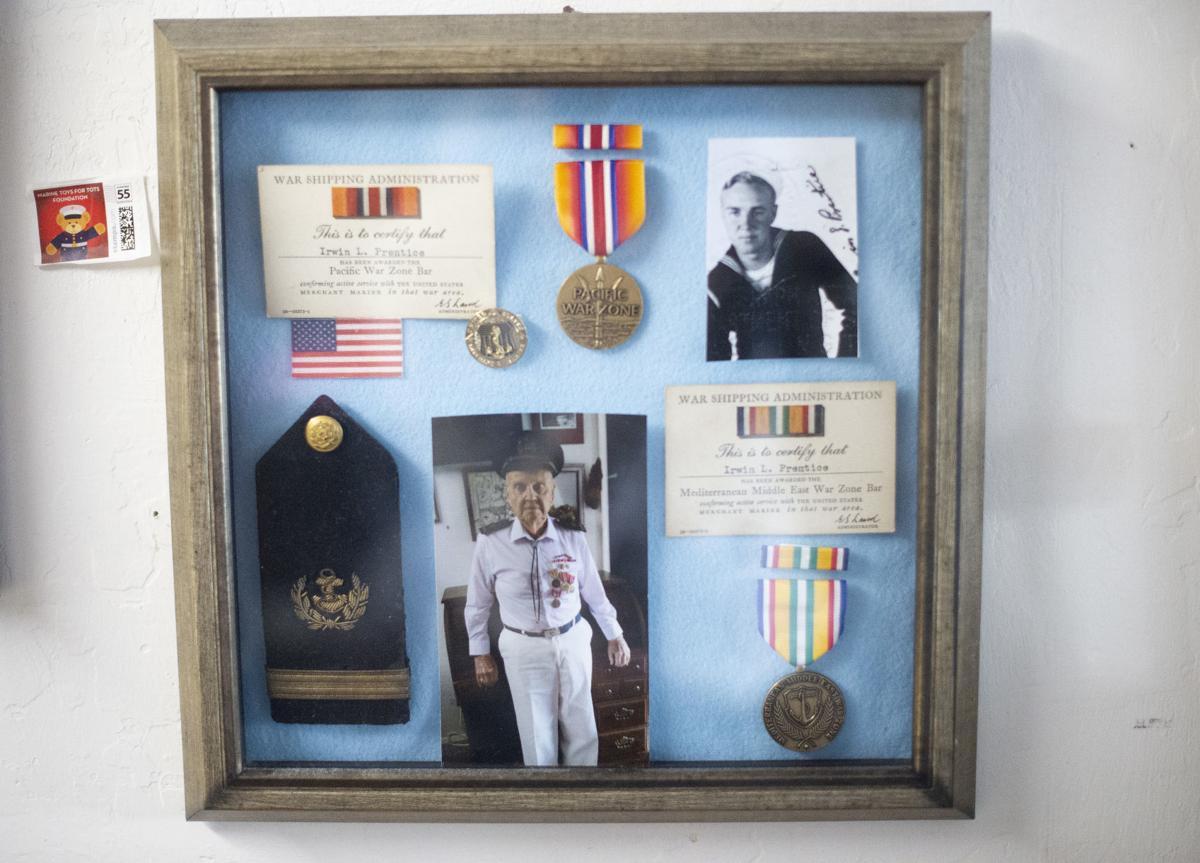 Photos and medals of the late WWII Merchant Mariner Irwin “Irv” Prentice on a wall at his home Thursday in Coos Bay.

Conniejo Prentice, right, holds a photo of her late husband, Irwin, alongside her daughter Jenny Bingham at Prentice's home Thursday in Coos Bay. "Irv" served in the U.S. Merchant Marines during WWII and died recently at 96.

Photos and medals of the late WWII Merchant Mariner Irwin “Irv” Prentice on a wall at his home Thursday in Coos Bay.

COOS BAY — Conniejo Prentice's eyes glisten as she looks over old photographs, letters of gratitude and military awards spread out across her home of a man she cherished so much.

A man she refers to fondly as the love of her life, a man who was known around the Bay Area as a kind, funny guy who always had a happy grin on his face, a man she called her husband and hero —decorated WWII Merchant Mariner Irwin “Irv” Prentice.

On Friday, Oct. 25, Prentice passed away at the age of 96. A self-determined, motivated young man, Prentice, a seaman, joined thousands of other civilian volunteers during the early 1940s and entered the U.S. Merchant Marine.

From 1941 to 1946, Prentice traveled across high-risk, dangerous waters to help transport a number of vital war supplies, which included food, weapons and equipment as well as military personnel to America’s armed forces and its allies on the front lines of war.

According to Conniejo, Prentice, who enlisted at the age of 18, joined with his best friend after getting the idea to sail on the boats they helped build. Soon after, he enrolled in the Maritime Officers Training School at Fort Trumbull in Connecticut, where he graduated after one year.

With German and Japanese U-boat attacks constantly on the horizon, Merchant Mariners had to be alert and quick on their feet when it came to protecting their lives and the supplies they carried.

According to records kept by the War Shipping Administration, over 1,500 ships were sunk due to war conditions. The ships, which were often targeted by enemy submarines, suffered damages caused by a number of bombs, mines and torpedo explosions.

Remembering stories told to her by Prentice, Conniejo said there was one that stuck out to her, which was the time he and a small crew of seamen came under direct fire as they neared enemy territory.

“During the 1940s there were a lot of merchant ships that had no armed guards,” said Conniejo. “I don’t remember the exact details, but he did tell me he and a few other mariners helped blow up an enemy submarine.”

Without hesitation, Prentice was able to help save the ship’s supplies as well as the dozens of mariners aboard. According to casualty statistics, which were compiled by the American Merchant Marine at War’s website, Merchant Mariners, which is not a part of the U.S. military, suffered a higher casualty rate than any branch of the military, a 1-to-26 ratio.

According to Conniejo, Prentice had seen many of his fellow crew members die as a result of war, including the friend he entered with. Considered one of the lucky ones, she said he did his best to never take life for granted and lived his life to the fullest.

Since his enlistment, Prentice had taken part in nearly every invasion made by the U.S. Army, including transporting supplies to the Solomon Islands, Sicily and Italy as well as to the Aleutians Islands for the Kiska and Atu invasions, according to an old newspaper clipping maintained in his military record.

Prentice was aboard a number of cargo ships, also known as liberty ships, some of which included the S.S. James B. Weaver, the S.S. Turrialba, the S.S. John H. Murphy and the S.S. Wayne MacVeagh as well as others employed during WWII to transport goods.

“He was also involved in Normandy,” said Conniejo. “He was with other Merchant Mariners moving in supplies when the Army invaded.”

He was later awarded a certificate as a U.S. Merchant Marine veteran for his time served during WWII. A Presidential Memorial Certificate was recently sent to the Prentice family, which featured President Harry Truman's signature, as a way for the U.S. to recognize and honor his memory as well as express its gratitude for his service.

“Irv just loved being on ships and he loved the camaraderie on board,” said Conniejo. “He was really just a big goof ball and he although he had a lot of hard times he still never let things bother him and always tried to make other people laugh.”

After the war, Prentice followed a number of career paths, following his interests wherever it led him. He continued to build boats, became a photographer, a licensed pilot and boat captain, a woodworker and a jeweler.

He attended the Gemological Institute of America where he received his certification in colored stones in 1983. For the past 40 years, Prentice owned and operated Irv’s Jewelers out of his home in Coos Bay.

In 2017, Prentice met Matthew Hays, then a case manager for the Oregon Coast Community Action’s Supportive Services for Veterans Families, who helped him apply for veteran benefits, which is uncommon for mariners since it's not considered a part of the U.S. military.

However, in 1988, more than 40 years after the war, Merchant Mariners who served during WWII were given veteran status and allowed to partake in veteran programs and benefits.

After learning the challenges many WWII Merchant Mariners faced in getting the recognition they deserved and being considered veterans, Hays said he began doing research to find ways to help Prentice.

“It was those very first moments of me digging and doing more research on veteran benefits and who should be allowed those benefits that led me on a path to becoming the new Veteran Service Officer for Coos County,” said Hays. “I was running a program housing homeless veterans before, but I had never really assisted with the federal VA benefits side of things.”

“Irv had jokes,” said Hays. “He was 94 when I met him and just a happy guy with a great smile. He was definitely a sailor with a great sense of humor and really just a great man.”

According to Hays, while Irv waited over 70 years to officially receive benefits and formally be recognized as a veteran, he did so with a strong, unwavering spirit.

“(Irv) taught me that there is always a way,” said Hays. “It can take some time, but eventually as long as you see it through you’ll get what you deserve.”

The nonprofit that serves homeless veterans was given the sizable gift from Dennis and Janet Beetham of DB Western. The chemical engineering corporation owners took interest in Bryan’s Home shortly after it was established and kept an eye on it as it developed.