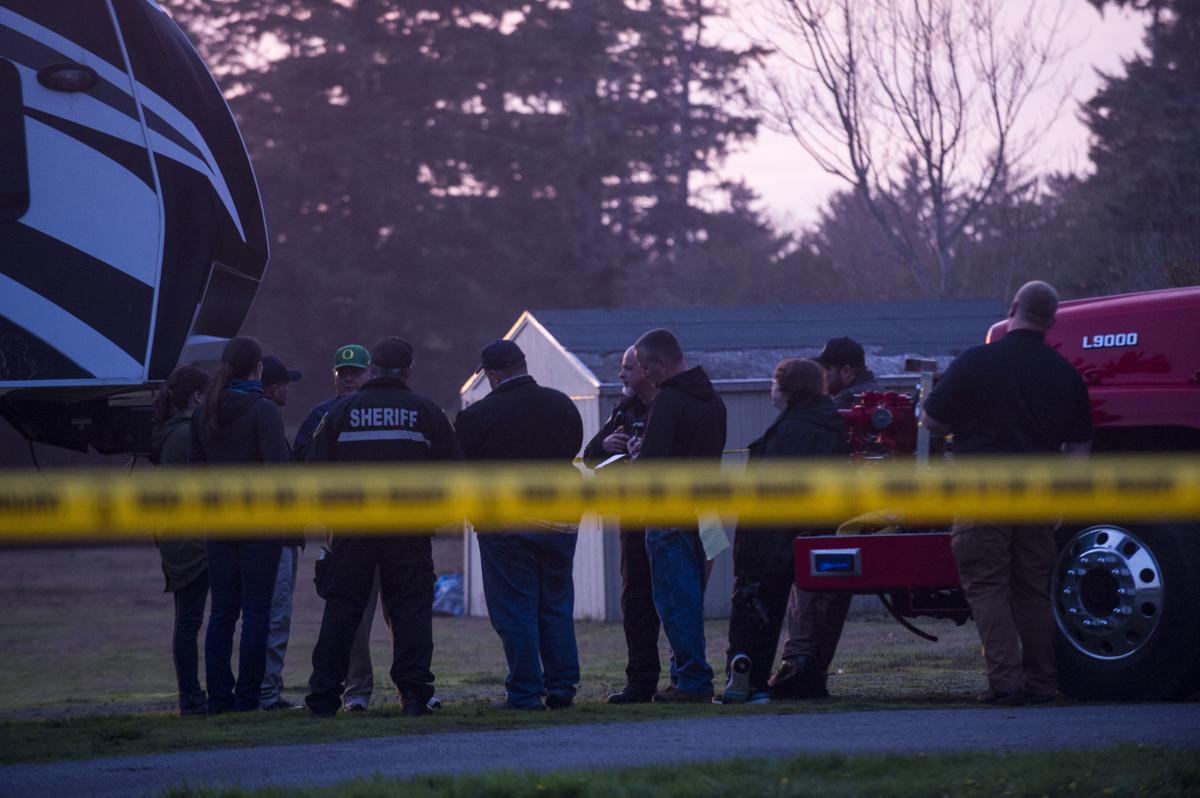 Officials work Saturday at the scene of an officer-involved shooting at Faith Baptist Church along U.S. Highway 101 in Bandon. Police from multiple agencies fired on and killed Robert Charles Foster after a standoff that started with him threatening to explode materials in his truck, and ended when he pointed and fired a shotgun at officers in a field behind the church. 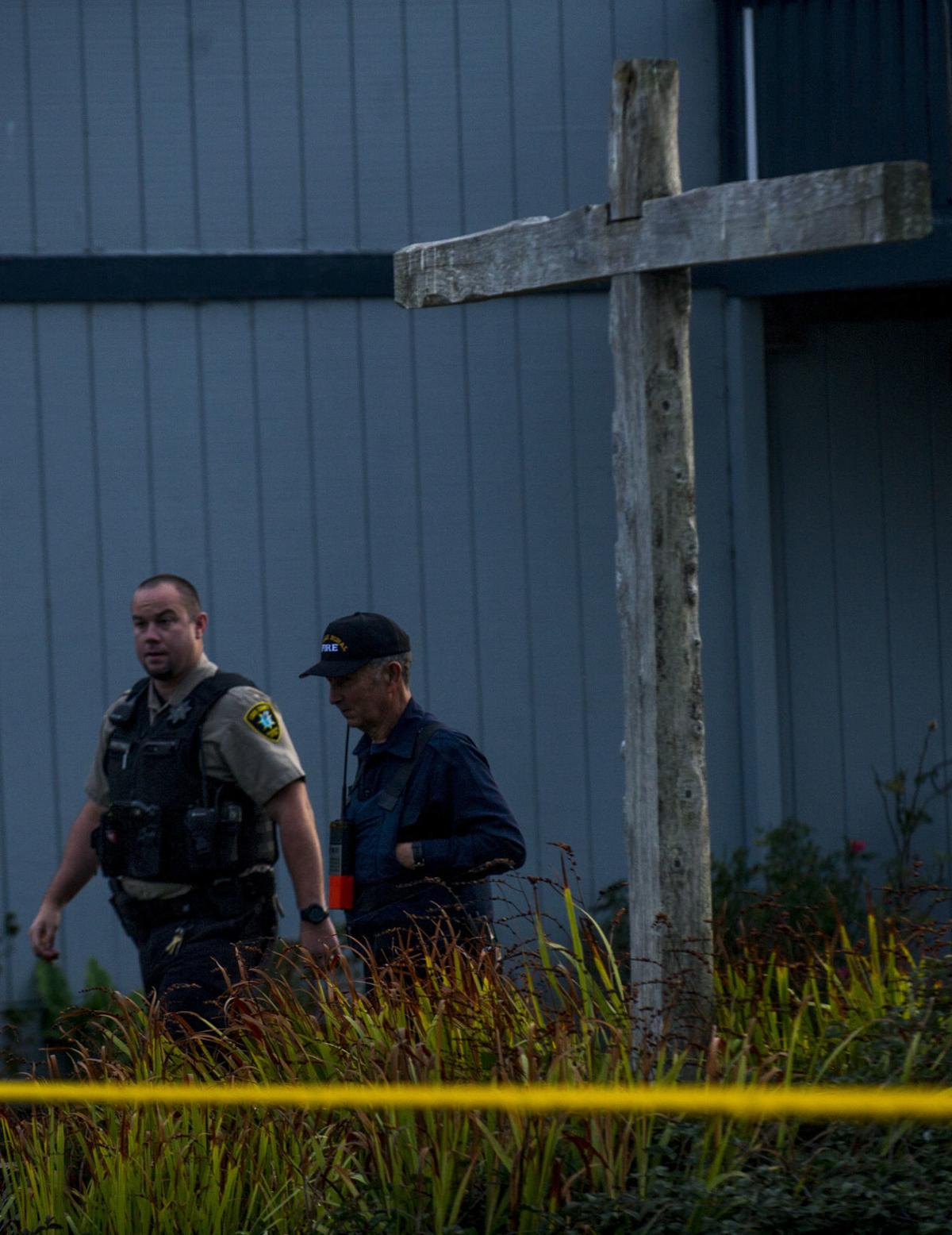 Coos County Sheriff's Department Deputy Matt Whitmer, left, and Bandon Rural Fire Department Chief Lanny Boston work Saturday at the scene of an officer-involved shooting at Faith Baptist Church along U.S. Highway 101 in Bandon. Police from multiple agencies fired on and killed Robert Charles Foster after a standoff that started with him threatening to explode materials in his truck, and ended when he pointed and fired a shotgun at officers in a field behind the church.

BANDON — A Coos County man is dead after he allegedly pointed and fired a shotgun toward officers in an empty field near the Faith Baptist Church in Bandon late Saturday afternoon.

According to Coos County District Attorney Paul Frasier, six officers from numerous law enforcement agencies returned fire and struck Robert Charles Foster, 65, who had earlier that day threatened to set off an explosion.

“He was parked in the middle of the field when he called dispatch and told them he had explosives in his truck and that he was going to blow it up and cause damage,” Frasier said. “We had a veteran negotiator talk with him for several hours to please get out of the car, that he didn’t want to do this, and that we could help.”

Sometime between 3:20 and 4 p.m., Foster had exited his pickup truck where multiple officers witnessed him hold a shotgun and a flare. From drone surveillance, there appeared to be some explosive type materials in the bed of his truck that he had been fumbling around with, according to Frasier.

“Authorities talked to an acquaintance who had seen him earlier in the day had described to officers that he had several milk jugs full of gasoline,” Frasier said. “He also said he had a blue trash can that had a propane tank in it.”

In the moments leading up to the shooting, Frasier was told by officers that they could see him mouthing, “come and kill me or come and shoot me.” It was later around 4 p.m., in which Foster pointed his gun and fired.

As of now, it is unclear how many shots were exchanged and where exactly Foster was hit. A full autopsy and medical examination is expected to take place soon. Frasier has named Coos Bay Police Department as lead investigators in this case following officer-involved shooting protocols.

Initial interviews have been completed with the officers, all of who are expected to take a leave of absence as the investigation continues, said Frasier.

Foster had previously been in contact with the Bandon Police Department and the Sheriff’s Office on at least two occasions. According to Frasier, he was known by law enforcement to be suffering from mental health issues and had even attempted suicide earlier this month.

“He had apparently attempted to jump off the bridge north of (Bandon) and was seen with a rope that had a noose and tied it off,” Frasier said. “He was getting ready to jump and hang himself and (Bandon Police) Chief Webb and a deputy from the Sheriff’s Office rushed him to the ground and basically stopped him.”

Foster was then placed at Bay Area Hospital on a mental hold Oct. 11 when the incident occurred. On other interactions with the Bandon Police Department, Frasier said. Foster had expressed apparently to officers that he had been in chronic, constant pain and was for whatever reason not able to get the medication he needed for it.

"The initial investigation at this point indicates that Mr. Foster planned the events of today with the intent of provoking the police to shoot and kill him," Frasier said later in a press release.

Frasier said members of the Douglas County Major Crimes Team, the Coquille Tribal Police, the Confederated Tribal Police and the Bandon Police Department are assisting with the investigation.

The nearby Faith Baptist Church was empty at the time of the incident and no other injuries have been reported. Billy Smoothboar's restaurant, located next to the church, was evacuated and closed for the rest of the day, according to co-owner Dan Barnett. The investigation is ongoing and more information is expected to be released.

Dog killed after fight with puppy in Empire

Three hospitalized after fire at the Tioga building in Coos Bay