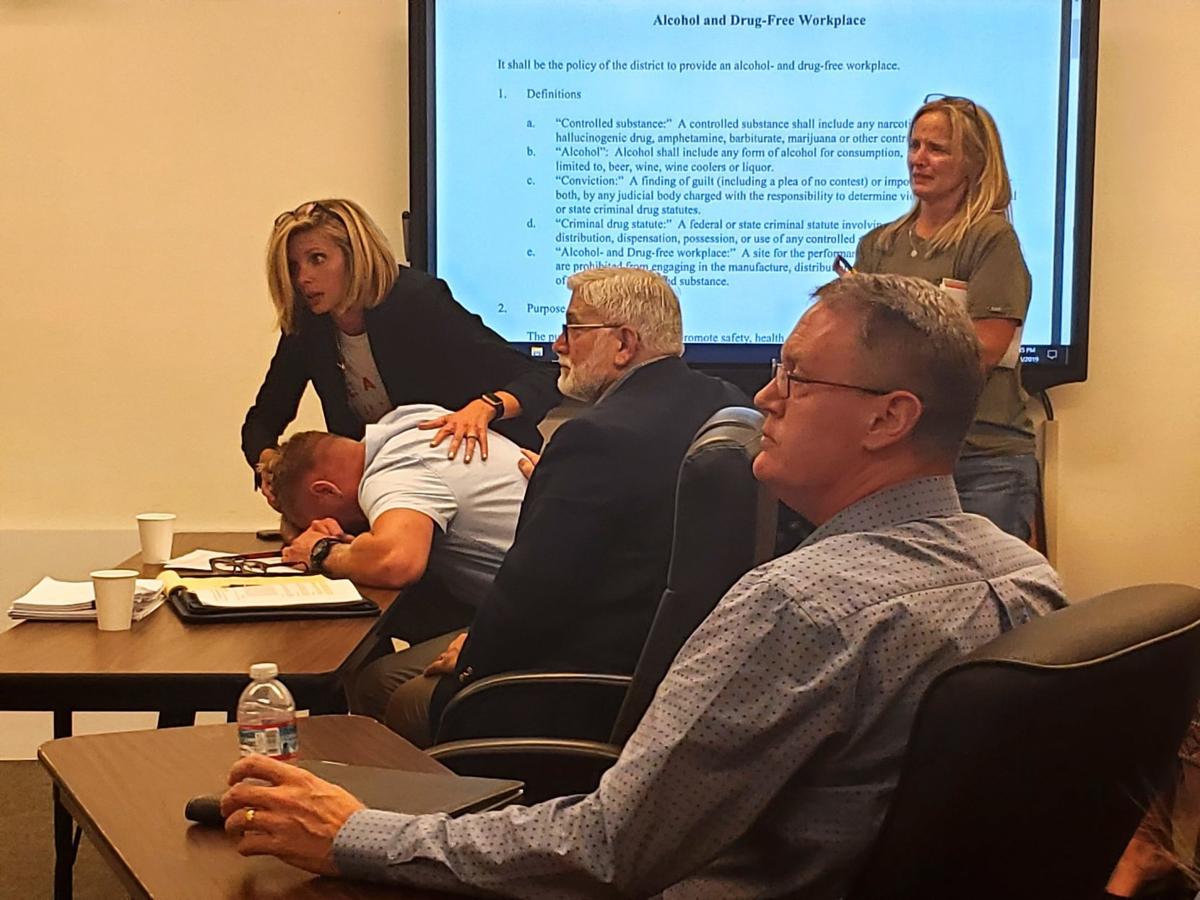 Jesse Ainsworth lays his head on the table, overwhelmed with emotion, after the Coos Bay School Board votes to reject Superintendent Bryan Trendell's recommendation of dismissal. 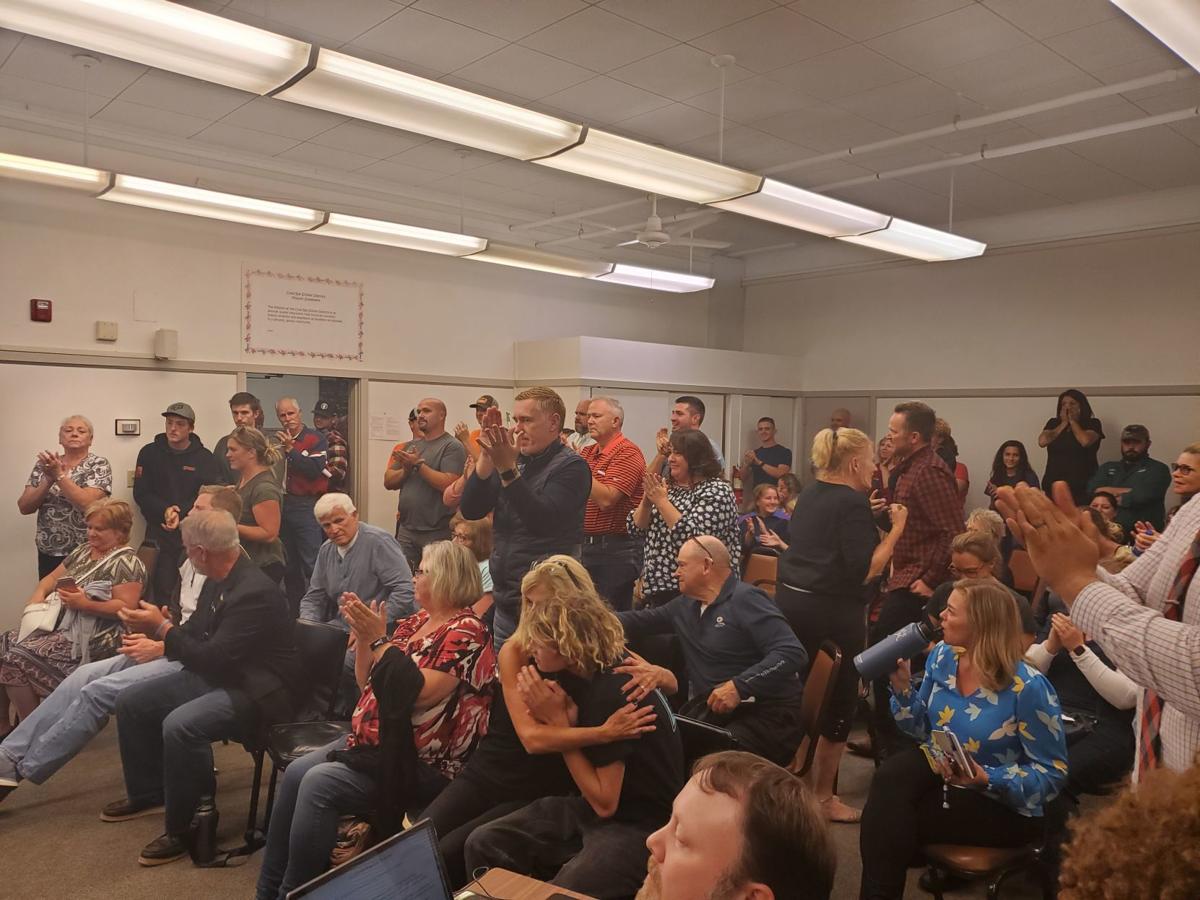 Over 100 people packed the school board meeting room at Milner Crest on Monday evening to hear the testimonies and deliberations over possibly dismissing woodshop teacher Jessie Ainsworth. The crowd erupted in cheers after the Coos Bay School Board voted to keep him on staff. 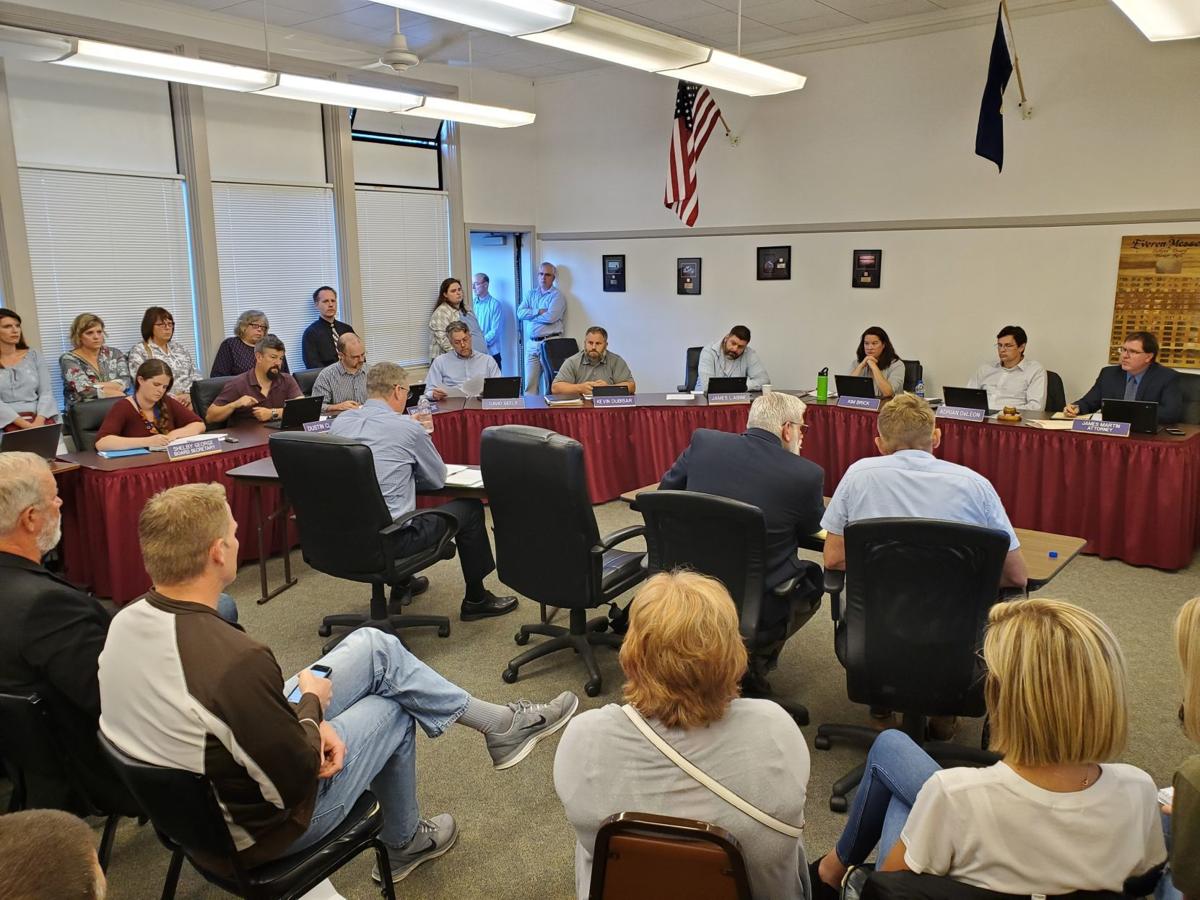 On the evening of Monday, Sept. 23, the Coos Bay School Board held a public hearing over the consideration of Superintendent Bryan Trendell's recommendation to dismiss teacher Jesse Ainsworth.

COOS BAY — In a 5 to 1 vote, the Coos Bay School Board rejected the recommendation to dismiss teacher Jesse Ainsworth.

The decision was made at the end of an almost four-hour public hearing on Monday, Sept. 23, requested by Ainsworth to be held in front of the community, which School District attorney James Martin said he was within his rights to do.

Over 100 community members packed the School Board’s meeting room at Milner Crest, many propped against walls, sitting on the floor and leaning in from the hallway outside both exit doors.

The spotlight has been on Marshfield High School’s woodshop teacher, Jesse Ainsworth, since news broke of his arrest in July after a bag containing drugs and syringes addressed to him, shipped from Bulgaria, were found by a student on campus. He was initially arrested by the Coos Bay Police Department on three counts of possession of a schedule III controlled substance.

Ainsworth was later placed on a deferment program, which, after 18 months, would allow his record to be wiped clean.

The reason for the public hearing in front of the Coos Bay School Board on Monday was to hear from Ainsworth through his attorney and three witnesses, as well as Superintendent Bryan Trendell, who presented the recommendation for Ainsworth’s dismissal.

School Board member Dustin Clark recused himself at the beginning of the hearing, which meant he would not be able to vote in a final decision.

Ainsworth’s attorney rebutted those reasons, explaining that Ainsworth sought those drugs as means to treat a medical condition, since diagnosed as hypogonadism. Ainsworth initially heard of treating his symptoms of depression and decreased libido from someone at his gym.

However, Ainsworth’s attorney argued that the drugs never were on campus but were stolen from Ainsworth’s truck at his home a mile away from campus.

Board member Kim Brick added that she believes Ainsworth’s character is “solid” and that she believed “a lot of people like him,” but that she didn’t think his medical condition or character weighed into the decision. What she wanted discussed were the three reasons that Trendell gave for termination.

On the evening of Monday, Sept. 23, the Coos Bay School Board held a public hearing over the consideration of Superintendent Bryan Trendell's …

“This is a recommendation, which means we don’t have to accept it,” argued board member James LaBine. “A lot of people self-medicate. Many people here will go home and have a couple beers at night and feel better, so to look him in the face and say ‘your way of self-medicating is wrong’ is ruthless.”

He pointed out that when it comes to depression, waiting for a diagnosis and help that might take a year, a month, or even a week which might be too late for some people. He also highlighted the fact that Ainsworth is in the diverted program, which means in 18 months “this would never have happened in the court’s eyes,” he said.

“He knows he made a mistake,” LaBine told the other board members. “But in my eyes, everybody in this town needs to stop thinking they’re above everyone. People make mistakes. If you habitually make a mistake, that’s different. But one mistake … that’s not enough for termination.”

Board member David Geels challenged Ainsworth’s version of events, saying that “a lot of folks have ongoing conditions of all sorts but it is how we deal with it that reflects our character.”

“I think we should recognize the misuse of substances and addiction that can occur, which comes through as secretive, finding strange ways of getting what we want like from Bulgaria,” Geels said. “I would have spoken to people around me about it and not spoken to someone at the gymnasium on what to do. I’m saying I would feel better if the story gelled more consistently.”

Board member Kevin Dubisar riled the room when he tried to console Ainsworth during the deliberations, telling him that “you’re life won’t be over” if the board accepted the recommendation of termination.

The board discussed the ongoing investigation conducted by the Oregon Teacher Standards and Practices Commission into Ainsworth’s case, which may result in him losing his teaching license.

“If they take his license, it’s out of our hands,” DeLeon said, to which Dubisar argued that the board was elected to make a decision.

“There’s a lot of healing that needs to be done in this district,” LaBine said and made the motion to reject the recommendation of Ainsworth’s termination.

LaBine, DeLeon, Brick, Geels, and Grotzke voted in favor of the motion. Dubisar voted against it.

Once the room saw the hands in the air, keeping Ainsworth on staff at the Coos Bay School District, people flew up from their chairs and cheered.