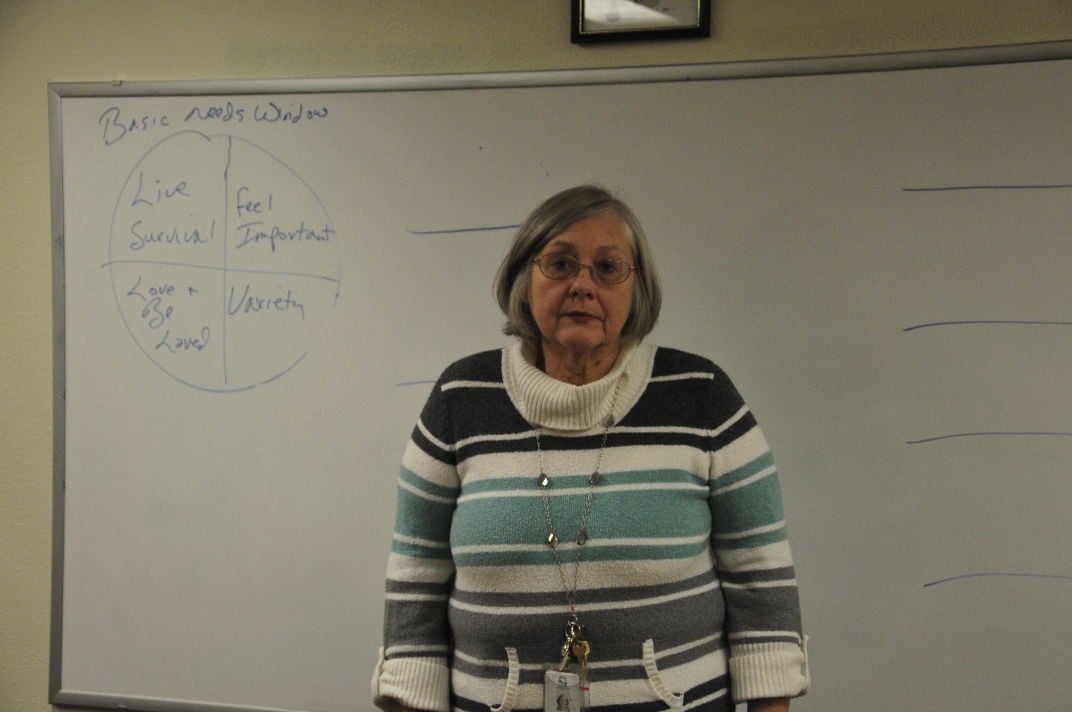 Day Reporting Center case monitor Sheryl Flood leads moral reconation therapy classes weekly at the North Bend Annex. The treatment has shown a high rate of success in curbing criminal behavior for those who have completed the course. 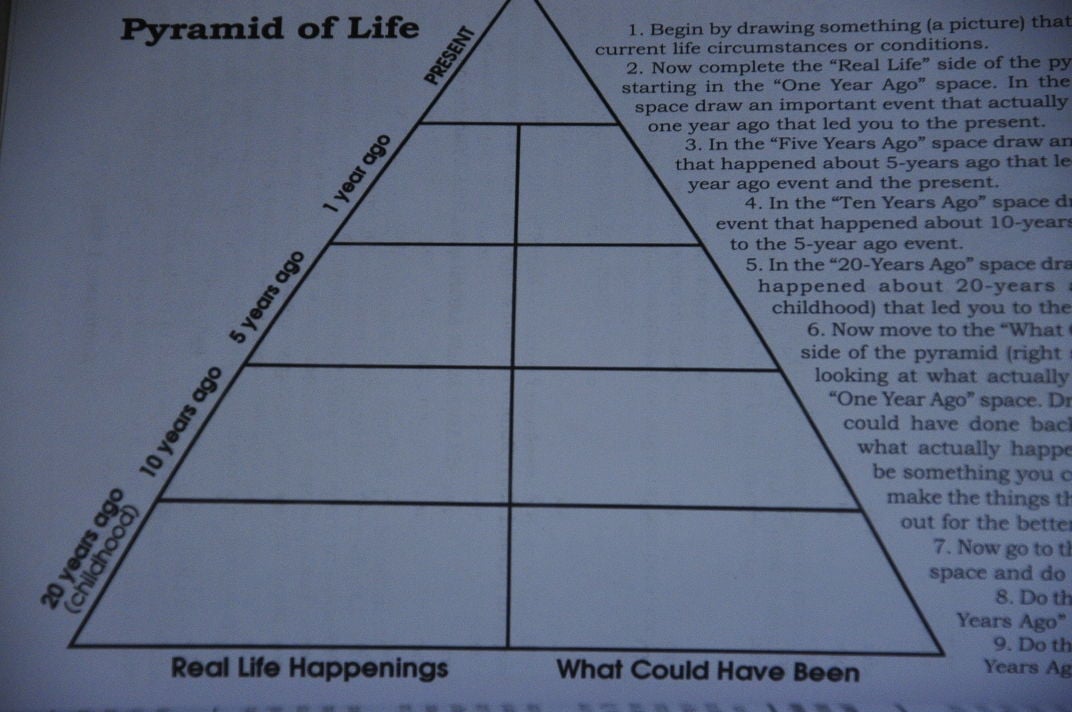 Offenders looking to complete moral reconation therapy must take an honest, hard look at their lives and the decisions they've made.

Day Reporting Center case monitor Sheryl Flood leads moral reconation therapy classes weekly at the North Bend Annex. The treatment has shown a high rate of success in curbing criminal behavior for those who have completed the course.

Offenders looking to complete moral reconation therapy must take an honest, hard look at their lives and the decisions they've made.

COQUILLE — In her 16 and a half years working for Coos County Community Corrections, Sheryl Flood has heard horror tale after tale about the circumstances behind the criminal mind of probationers and parolees she tries to provide treatment for.

But as a case monitor, she tries to find the good qualities in each person, not casting them aside as if they are branded with some sort of scarlet letter, and instead looks to help them rectify the behavior that landed them in trouble.

Flood is a proponent of moral reconation therapy, otherwise known as MRT, which is a cognitive treatment tool to help people face and understand the causes of their behavior, set goals and learn to make better decisions for the betterment of their lives.

“If the thinking changes, the behavior will automatically change,” Flood said. “A lot of clients do want something different, but they don't know how to fix themselves.”

A lot of the criminal mentality is instilled early in the lives of the people Flood sees.

“I had one gal who was a kleptomaniac, and she'd just steal anything,” Flood said. “She'd tell her friends, 'Search me so I don't have something.' Her back story was her mother wouldn't let her in the house if she didn't have a laundry list of say bread, milk and stuff with no money, so she'd have to go steal it.”

Others resort to a means to escape the tragedy and pain that they have had to live with.

“You've got to realize these people are beat down; I had one gal who was raped by all her family members when she was growing up,” Flood said. “I mean just horrible, horrible things have happened. Kidnapped by Gypsy Jokers (a motorcycle gang), you can't even imagine. Being a prostitute for a while and she is a sweetheart, but got into drugs because she just wanted to escape the pain.”

Drugs use continues to be one of the major contributors to poor decision-making within the county, as 80 to 90 percent of Flood's clients have substance abuse issues.

“A lot of them, if you get them clean and sober, everything starts working for them," Flood said. "Some are criminals from the get-go, but for a lot of them, criminality came after they became addicted, and they started doing the crimes to support the habit.”

Despite the horrendous accounts Flood hears as she tries to build relationships, there is hope and redemption at the end of the tunnel for some who truly wish to change their lives and want to work for it.

“When you hear all the things these people have been through, they are survivors, but thinking can always change regardless of how old you are, so if you can give them that piece, they can actually start looking step-by-step and change their behavior,” Flood said.

MRT has its similarities to the different step programs, which help troubled people address their demons.

From confronting examples of dishonesty, betrayal, effects on family, friends and others to making a commitment to change, offenders in treatment strip away at the core issues holding them back.

"They first have to have that accountability piece where they have to look in the mirror and say, 'This behavior sucks and it's not helping me and these things I've been doing are really negative,'” Flood said. “It's a lot of goals, relationship building, where are they in their relationships and how they view their world, and a step-by-step, piece-by-piece breakdown of negative things and putting something else in its place.”

The classes people attend do not allow them to skate by silently, which actually makes the course take longer to complete.

Because many enter reluctant to share their experiences, it can often take three or four classes just to complete one objective.

Even the workbook Flood uses doesn't look intimidating, but it also takes some time to get through because it forces each person to take a hard look at their life and the decisions they've made.

With each person at a different point in his or her treatment, it also allows those who are struggling at the beginning to see the fruits of moving along the process and achieving some sort of success.

Success and breaking down barriers, it turns out, are a key component of helping people seek redemption.

Before the county transitioned to Evidence Based Practice with MRT, Flood would work through sections instead of the entire workbook for those who sought treatment.

In one particular case, a young woman who wanted to go through more, so Flood obliged with one-on-one sessions because, after all, she was there to help anyone who wanted help.

“So we got to the goal section, which is probably three quarters of the way through the book, and she started crying,” Flood said. “I said 'Why are you crying?' and she said 'Sheryl, I just can't do these goals.' I said 'Why can't you do these goals?' and she said, 'My dad told me I would never, ever get anything accomplished and I cannot complete anything, and if I can't get this goal accomplished, they'll just say he's right.'”

Despite this woman's fear of her self-fulfilling prophecy, Flood said she accomplished her three goals for herself, including employment.

For many of Flood's clients, setting and achieving goals can be difficult because many of the people have never achieved or identified themselves as achieving something. Flood tries whatever she can to make it easier for them.

That can include driving those in treatment to classes or helping them with whatever it is they have identified as a goal — whatever it takes to make sure those barriers are not in place to impede the treatment's progress.

“There was one guy who I was trying to get to do the GED thing, and I could tell he was scared,” Flood said. “I said we could walk up there together and we could tour it, and sometimes more information takes away some of the fear. You've got to realize that these people have just been defeated in so many ways, and their self-esteem is in the bucket, and they've had a lot of defeat in their life. It's getting them to where they can do something and believe they can accomplish it.”

As a way to encourage her clients and build up their self-esteem, Flood gives out certificates for completion of the different programs she oversees.

While it may seem like a small gesture to some, it's had a noticeable impact.

“Some of those people are just so excited about getting a certificate and say, 'That's the first time I've gotten a certificate in my life,'” Flood said.

Of course, not all treatment takes the first time, and Flood has seen her fair share of repeaters.

Some just weren't ready to move on, but it doesn't mean there hasn't been a change in mindset.

“A couple of the gals screwed up and started doing drugs again, and their probation officers said, 'We want you to go through the first three steps of the program again because that's where you face your stuff,'" Flood said. "Those girls said they wanted to do the whole book over again.”

Treatment sinks in differently with each person, but in the long run, it's something that has proven to curb recidivism if a person truly wants to change.

“This tool works if you want to do the work,” Flood said. “It'll change your life, but you have to work just like anything else.”

A series by reporter Devan Patel detailing the rise in heroin use in Coos County, and the work Coos County Community Corrections and the Coos …