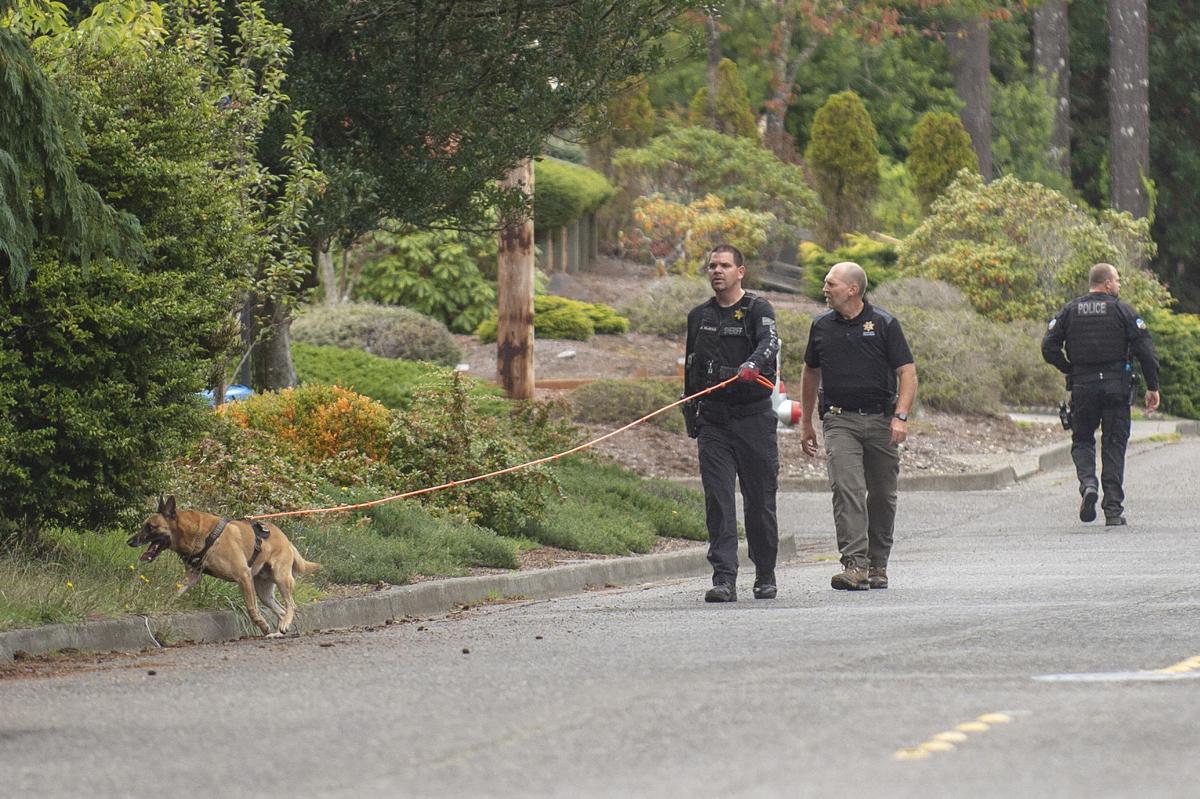 Coos County Sheriff's Sgt. Adam Slater walks with K-9 Odin as they search for a man in the Airport Heights neighborhood on Tuesday. The search began after a parole and probation officer observed a wanted suspect near the intersection of Maple Leaf Street and Oak Street in North Bend. 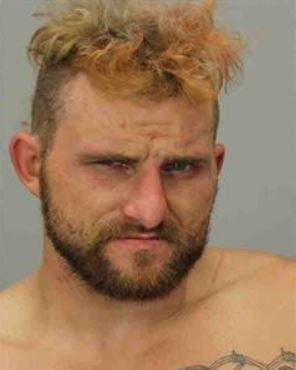 Joel C. Jones III was arrested Tuesday and taken to the Coos County Jail on a number of charges. 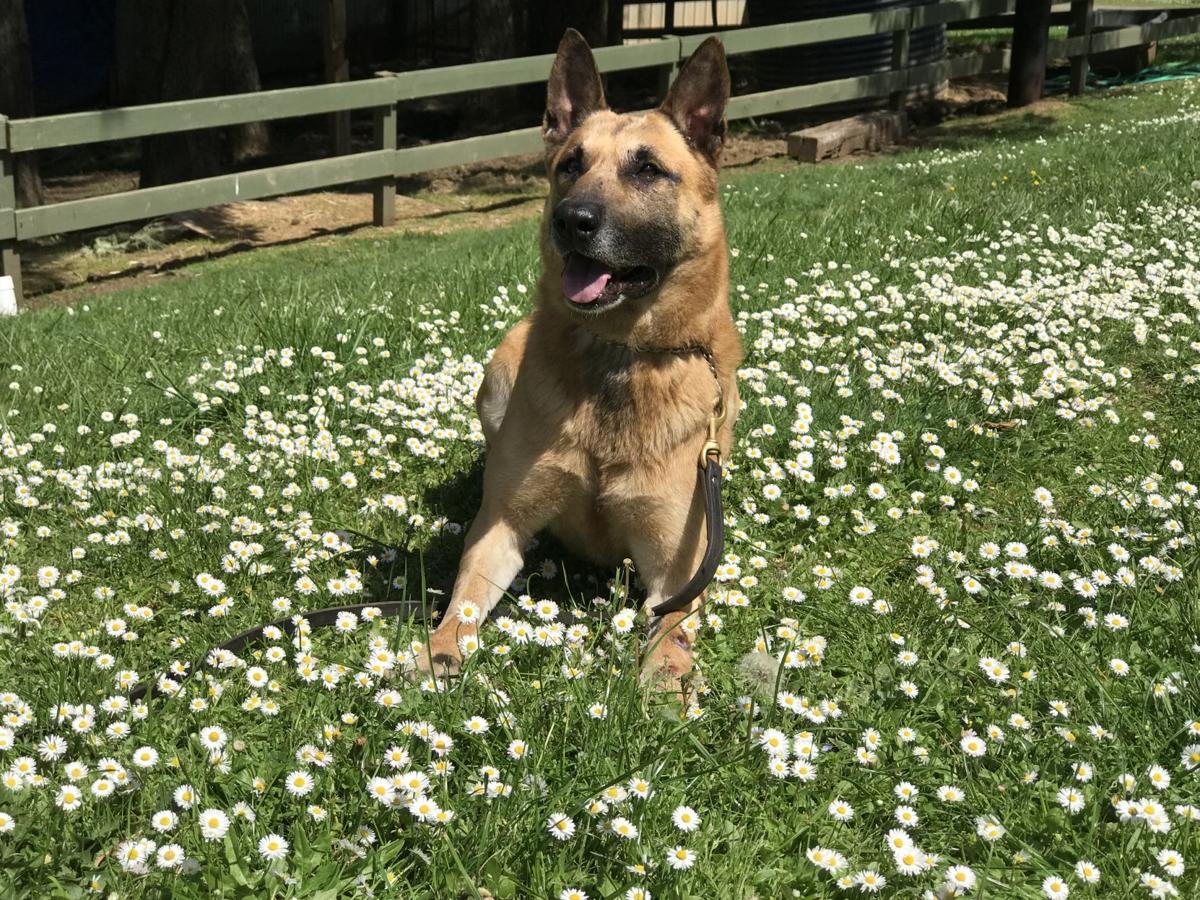 NORTH BEND — A Curry County man was arrested Tuesday in North Bend on a number of charges.

According to a press release by the Coos County Sheriff’s Office, on Oct. 15, at approximately 3:30 p.m., a parole and probation officer observed a wanted suspect, Joel C. Jones III, of Curry County, near the intersection of Maple Leaf Street and Oak Street in North Bend.

The officer attempted to arrest Jones who became physically combative and fought his way free. Jones then fled on foot into the Airport Heights residential area where a number of local law enforcement agencies set up a perimeter.

Coos County Sheriff’s Officer K-9 Odin was deployed to the scene and assigned to track down Jones which took approximately two hours. According to the press release, Odin was able to locate Jones’ underwear which “narrowed down the search area substantially.”

“It was evident Mr. Jones continued to move from location to location to evade capture,” said the press release. “During this time the Sheriff’s Office requested the assistance of air assets from the United States Coast Guard.”

Several North Bend residents’ aided law enforcement officials as they reported his whereabouts throughout the search. He had been seen hiding in a garage on Oak Street as well as running through numerous homes with one witness saying he was no longer wearing a T-shirt.

“K-9 Odin continued to diligently work the area and eventually located Mr. Jones hiding in a hole on the side of a sand hill with a plywood board over the top of him, as to not be seen by the Coast Guard helicopter,” said the press release. “Upon contact, Mr. Jones struck K-9 Odin several times in the head with a closed fist and was able to break free from Odin.”

Jones, who continued to run down a steep sand embankment, was eventually stopped due to the actions of an Oregon State Police trooper and K-9 Odin. He was taken into custody without further incident and transported to the Coos County Jail.

In April, local law enforcement agencies were advised by officials in Curry County to be on the lookout for Jones as he had several outstanding warrants and was attempting to obtain a firearm. Officers were told to take caution when approaching Jones as he was described as “extremely violent and would actively resist any law enforcement attempt to take him into custody.”

The Coos County Sheriff’s Office and a number of other local law enforcement agencies had for months followed tips and inspected several areas Jones was reportedly hiding. He was charged on his previous outstanding warrants as well with burglary II, interference with a public safety animal, resisting arrest, escape II, escape III, and several counts of criminal trespass stemming from this incident.

The Sheriff’s Office thanked Oregon State Police, the Confederated Tribal Police Department, Parole and Probation, the North Bend Police Department and the U.S. Coast Guard as well as several North Bend citizens for their assistance in locating and capturing Jones.

“The Sheriff’s Office would also like to remind the public of their 2nd annual K-9 Fundraiser being held at the Egyptian Theatre on Nov. 16 beginning at 5 p.m.,” said the press release. “All proceeds going to toward operation, and upkeep of these elite K-9 Deputies who serve in our community.”

Latest arrests and mugshots from around Coos, Curry, and Western Douglas counties.