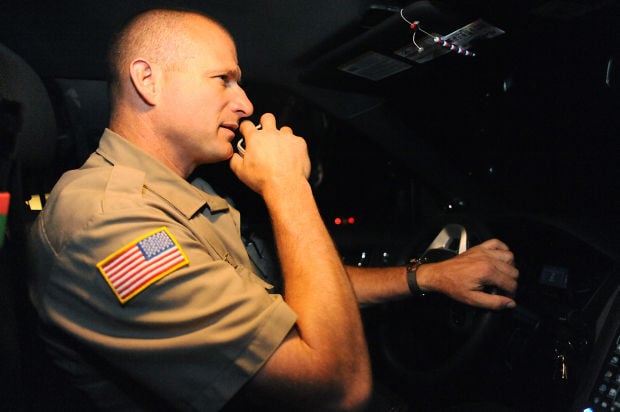 Coos County Sheriff's Deputy Ernie Mitchell radios in to dispatch before responding to a call about a stalking protection order violation in Fairview Tuesday night. Mitchell works the 5 p.m. to 3 a.m. shift and is the only sheriff's deputy covering all of Coos County from about midnight to 3 a.m. after his partner Deputy Klayton Wilson finishes his shift. 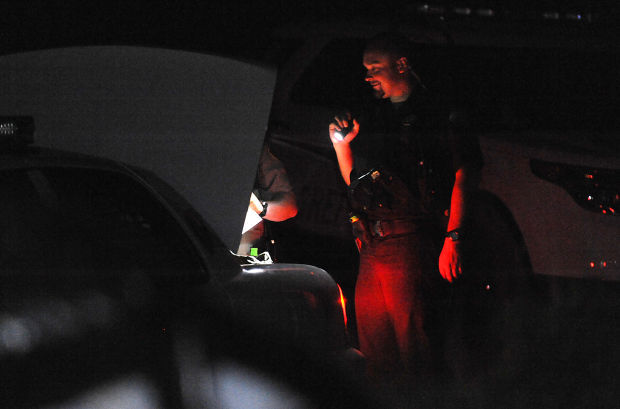 Bandon Police Officer Tony Byrd lights the trunk of Coos County Sheriff's Deputy Klayton Wilson after confiscating drugs, including methamphetamine, found in a Bandon residence when a man was arrested on a warrant Tuesday night.

Coos County Sheriff's Deputy Ernie Mitchell radios in to dispatch before responding to a call about a stalking protection order violation in Fairview Tuesday night. Mitchell works the 5 p.m. to 3 a.m. shift and is the only sheriff's deputy covering all of Coos County from about midnight to 3 a.m. after his partner Deputy Klayton Wilson finishes his shift.

Bandon Police Officer Tony Byrd lights the trunk of Coos County Sheriff's Deputy Klayton Wilson after confiscating drugs, including methamphetamine, found in a Bandon residence when a man was arrested on a warrant Tuesday night.

He flicks off all of the lights in his patrol car and creeps down a narrow dirt driveway in Fairview for a stalking complaint.

Mitchell grabs his radio from his center console and tells Deputy Klayton Wilson— who is on his second hour of overtime covering him — that he doesn’t like this situation.

Massive cutbacks starting in 2007 have whittled the sheriff’s patrol down from 40 officers to just eight. The Sheriff’s Office is slowly recovering — finding money to bring in four more officers in the coming months — but as of now, the gap between midnight and 3 a.m. leaves Mitchell on his own in potentially dangerous situations.

According to the Fairview complaint, a man has been drinking and flashing his headlights into his neighbor’s home.

This isn't the first time.

The caller has a restraining order for the alleged stalker — who has been logged into the computer as a mental subject — and claims that he has a gun that he’s previously used to threaten the neighbors.

Because of the distance between the two houses, no crime has actually been committed. Mitchell says it’s his civic duty to check it out anyway.

Lights are on inside the alleged perpetrator’s house and his pick up truck is parked out front. The driver’s door is ajar and a panting dog is sitting in the passenger seat.

Mitchell exhales before he exits his Ford SUV. With a handgun in his left hand and flashlight in his right, he gingerly walks around the house.

As he knocks on the side of the house —Mitchell says going up to the front door gives a potentially dangerous subject an advantage to shoot him — he sees a figure walking through the house. The person inside yells at Mitchell to get “off my property” and that he refuses to talk to police.

Not wanting to press his luck, Mitchell hops back into his SUV and avoids any type of further confrontation.

“Fear is huge,” Mitchell explained. “Anybody that says they’re not scared of stuff, you’re missing an important emotion that’s gonna save your life.”

That fear originates from the Sheriff’s Office being even more shorthanded than normal the past couple months.

The hole in the schedule started when officer Doug Miller got in a devastating crash on state Highway 42 in April that sidelined him from duty because of a severe concussion.

Miller is back, but Mitchell is still the only officer Coos County has in the wee hours of the morning.

Luckily for the Fairview call, Mitchell had Wilson behind him. If it was just an hour later, he would’ve been stuck by himself, going one-on-one with a potentially dangerous subject.

“When you go to something like that by yourself, your heart’s pounding, your adrenaline’s jacked, your focus is more narrow,” Mitchell said. “You’re not looking at everything.”

Wilson generally stays on for two hours beyond his shift to help Mitchell on Tuesdays. When asked if he trusted Wilson, Mitchell said, “with my life.”

Because of the cutbacks, everyone is behind on paperwork. Mitchell has a backlog of 40 reports.

Mitchell, 43, has been a cop for over 13 years after spending eight years in the U.S. Army.

Before dark on that particular Tuesday, Mitchell drove to Lakeside to take down a report of stolen batteries from a docked boat, headed to Bunker Hill to break up a fight, returned to Lakeside, and took a report of a missing man south of Bandon.

As Mitchell explains, the night shift is active and needs to be addressed as the crime is reported. On a typical night, he’ll drive around 250 miles in a shift, tacking up countless miles to the odometer.

The worst part of the depleted deputy roster is property crimes like burglaries — which Mitchell says are frequent in the county — simply don’t get enough resources to effectively fight them. Since the budget rarely allows for any type of DNA discovery, most go unresolved.

“Unfortunately we’re a bunch of report takers right now,” Mitchell said. “You need time to work the burglaries and right now with the amount of people we have, we just don’t have time.”

“Being out and about is as important as anything,” he said. “It’s definitely a deterrent.

“It’s kinda like that school teacher walking around the playground. The kids act better when they see the teacher out.”

Mitchell is superstitious. For the past 10 years, he hangs a red, white and blue beaded necklace in his car that his daughter made him. He also latched two pictures of his son to the dome light of his car so he’s always looking down on him.

Even with his good luck charms, he stays focused in every call he takes.

“I just think about what I’m going to do,” Mitchell said. “As long as you’re prepared for the worst case scenario, everything else will be easy.”

Reporter George Artsitas can be reached at 541-269-1222, ext. 236, at george.artsitas@theworldlink.com, or on Twitter at @COPSTheWorld.

If the Commissioners are paid they should take a pay cut to hire a deputy. I would much rather have another deputy on the force. God knows we don't need any more self absorbed, overpaid politicians (specifically Bob Maine) on the payroll.

I am interested in what the unions would say about an officer without adequate backup. Also what about the liability of the County to knowingly place deputies in dangerous situations. I can understand budget issues. But it seems like public safety and the safety of these deputies trumps hole patching, country road grading, dog catching, and over paying commissioners and their hired help. Why not publish the budget and let the public give some "priority" advice as to where the money is spent?