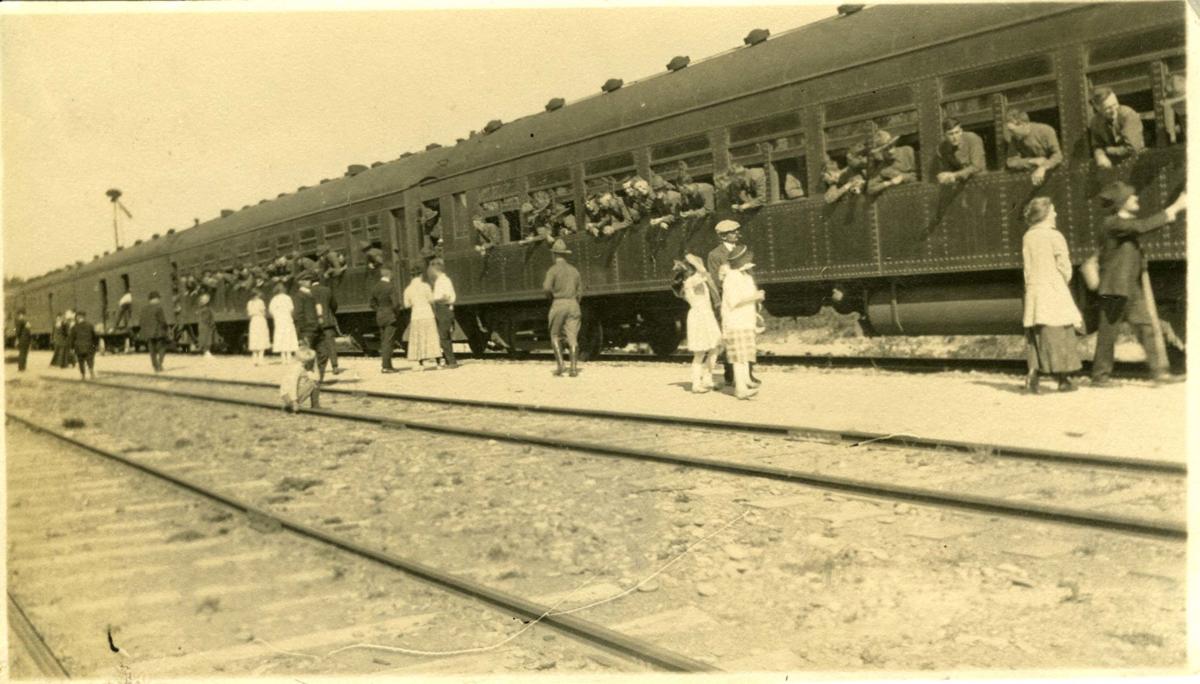 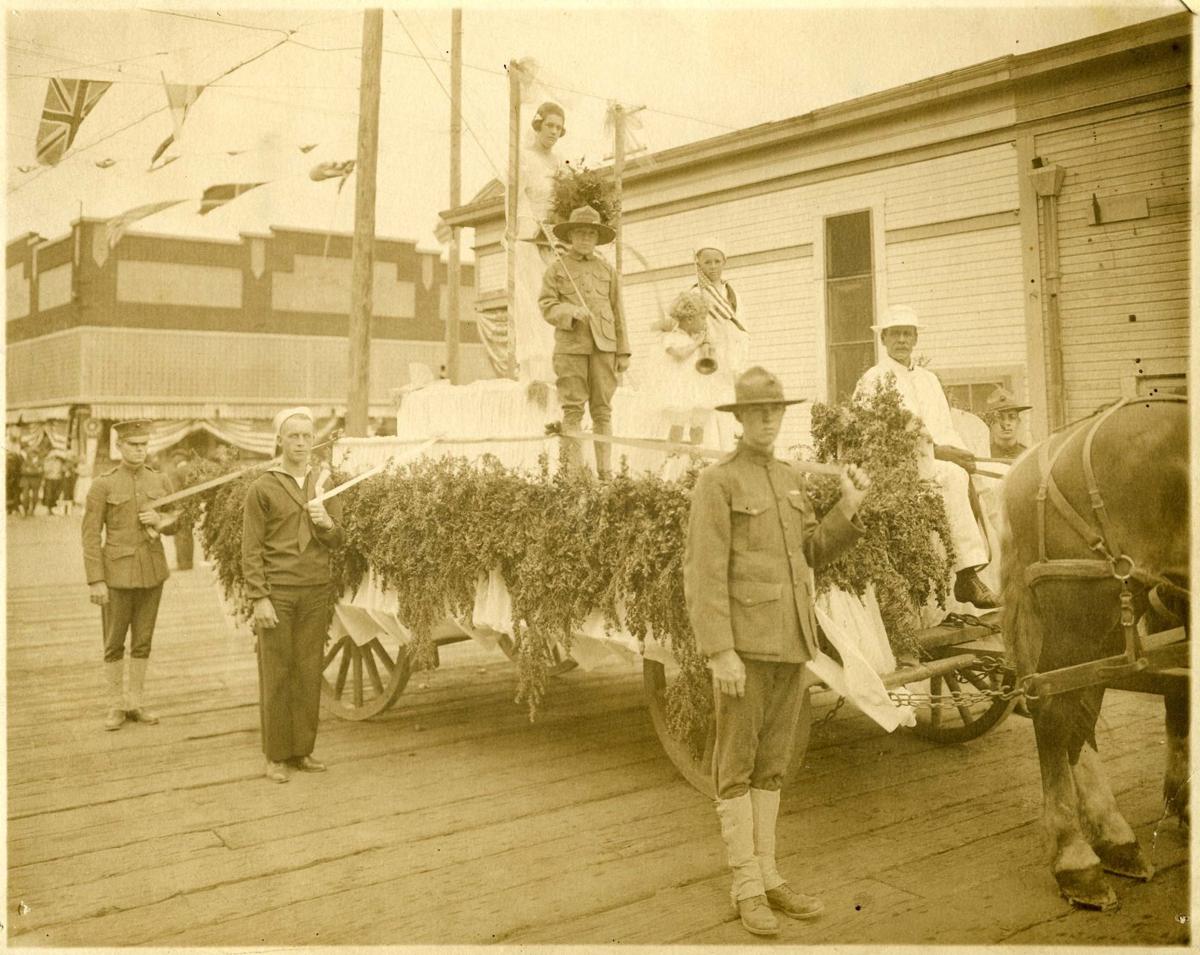 At the end of World War I in November, 1918, people in the Coos Bay Area celebrated peace at a parade on Front Street in Marshfield.

At the end of World War I in November, 1918, people in the Coos Bay Area celebrated peace at a parade on Front Street in Marshfield.

School closings, social distancing, and canceled events are making news headlines today – just as they did a century ago in Coos County. The COVID-19 (or coronavirus) crisis brings to mind an influenza pandemic during World War I that also caused major disruptions of life on Oregon’s South Coast.

America joined The Great War (WWI) in the spring of 1917. A year later, the first reports of a fatal new disease were published. In order to avoid bad morale among the troops, wartime censors of both the Allied and Central Powers generally suppressed news of the epidemic that was spreading quickly throughout Europe. Spain, however - a neutral nation - reported on it freely. Once the Spanish King Alfonso XIII contracted the disease in May of 1918, the virus took on the popular name “Spanish Flu.”

Spanish Flu, an H1NI virus with genes of avian (bird) origin, spread quickly during the summer of 1918 as military personnel from countries around the war were engaged in the conflict. By the fall of 1918, Spanish Flu was a pandemic. About one-third of the earth’s population at the time, 500 million people, eventually became infected and, of those, about 50 million died. In the United States, it has been estimated that about 675,000 deaths occurred because of the disease. The U.S. Congress appropriated $1 million in late September, 1918, for aid to public health service agencies. As the Great War came to an end on November 11, of that year, Congress directed all branches of the military to aid the work of local authorities. Unfortunately, as military personnel were discharged, or sent to the states to help, the disease spread even faster among Americans.

The Surgeon General issued rules and guidelines that sound familiar today: “Avoid needless crowding”, “Smother your coughs and sneezes”, “Choose and chew your food well”, and “Your fate may be in your own hands – wash your hands before eating.”

In October 1918, the chief health officers of the state, the mayors of both North Bend and Marshfield, along with the superintendents of both school districts, all agreed to shut down the public schools by mid-month to control the spread of the deadly disease. Schools in the Bay Area did not reopen until mid-January of 1919. By that time, the North Bend Board of Education had decided to hire its first-ever school nurse. Ultimately, North Bend High did not schedule graduation ceremonies until July, 1919, because so much school time had been lost to the Spanish Flu quarantine.

A strict quarantine was also enforced in late 1918 that closed other places where crowds congregated: churches, theaters, dance halls, Red Cross rooms, pool halls, soft drink parlors, and even the post office lobby. Club meetings, dances, and social gatherings of all kinds were prohibited. If an individual walked the streets of North Bend or Marshfield, a flu mask had to be worn. Police Chief Jack Carter of Marshfield urged all parents to keep children at home as much as possible.

Sporting events were canceled for the safety of both the athletes and the spectators. No football games were played that fall in the county. The Coos Bay Harbor of January 17, 1919, said: “The basketball schedule has not been arranged as yet as most of the other schools in the county are not certain if they care to play at all this year.” The influenza epidemic that affected athletic team competition also hit debate teams. Of the 35 high schools of Oregon that entered the high school debate league in 1918, a dozen withdrew by the spring of 1919 because of the influenza pandemic. North Bend High managed to create a team and win the County championship in the spring of 1919, almost by default. The annual County Track Meet was held at North Bend in May 1919 but Marshfield and Bandon did not participate.

The influenza outbreak and the rationing of supplies for the war effort created short supplies for the Bay Area’s main hospital. The Catholic Sisters who ran Mercy Hospital in North Bend asked for help just before Thanksgiving in 1918. An appeal was made for dishes, bed linens, towels, napkins, handkerchiefs, and soap as well as foods such as eggs, fruit, meat, and vegetables. A house-to-house canvas for these goods could not safely be undertaken due to the flu outbreak but South Coast citizens were able to drop off items at a safe location. “Words fail us in trying to express our appreciation,” wrote the Sisters in a letter to the Coos Bay Harbor after the successful appeal. “If we ever have ‘cast our bread upon the waters’, it certainly has been returned to us ‘a hundred-fold.’”

The March 14, 1919 edition of the Coos Bay Times reported that the county basketball championship could not be determined that season owing to war conditions and the influenza epidemic which made it difficult for games to be played. By “war conditions”, the paper was referring to the fact that boys had left town for the military during the Great War while others abandoned school to find work in booming local war industries. The Kruse and Banks Shipyards in North Bend employed hundreds of workers to fill orders for wooden ships. A report from the State Superintendent of Public Instruction noted “the inability to hold its boys for graduation may be largely due to economic conditions in the community where the high school is located.”

Local reports of Spanish Flu seemed to dissipate by the spring of 1919 but in the fall and winter of 1919-1920, smaller waves of influenza resurfaced causing cancellation of some events and short school closings. Although diagnosis and reporting about the Spanish Flu were primitive and often inaccurate during the WWI era, measures taken to safeguard Oregon citizens were warranted. The population of the state of Oregon was about 750,000 in 1918-1920. About 50,000 people, or 1 in 15 Oregonians, became sick with the Spanish Flu. Estimates suggest that roughly 3,500 Oregonians died from influenza in that time period including hundreds from the South Coast. The prevention methods advocated in 1918 - school closings, social distancing, and canceled events - might still be the best initial method of prevention today.

Steven Greif is a former NBHS history teacher/coach who volunteers with the Coos History Museum. He has written a history of the North Bend School District.

Great article, Steve. It gives us a context for what we're experiencing today.