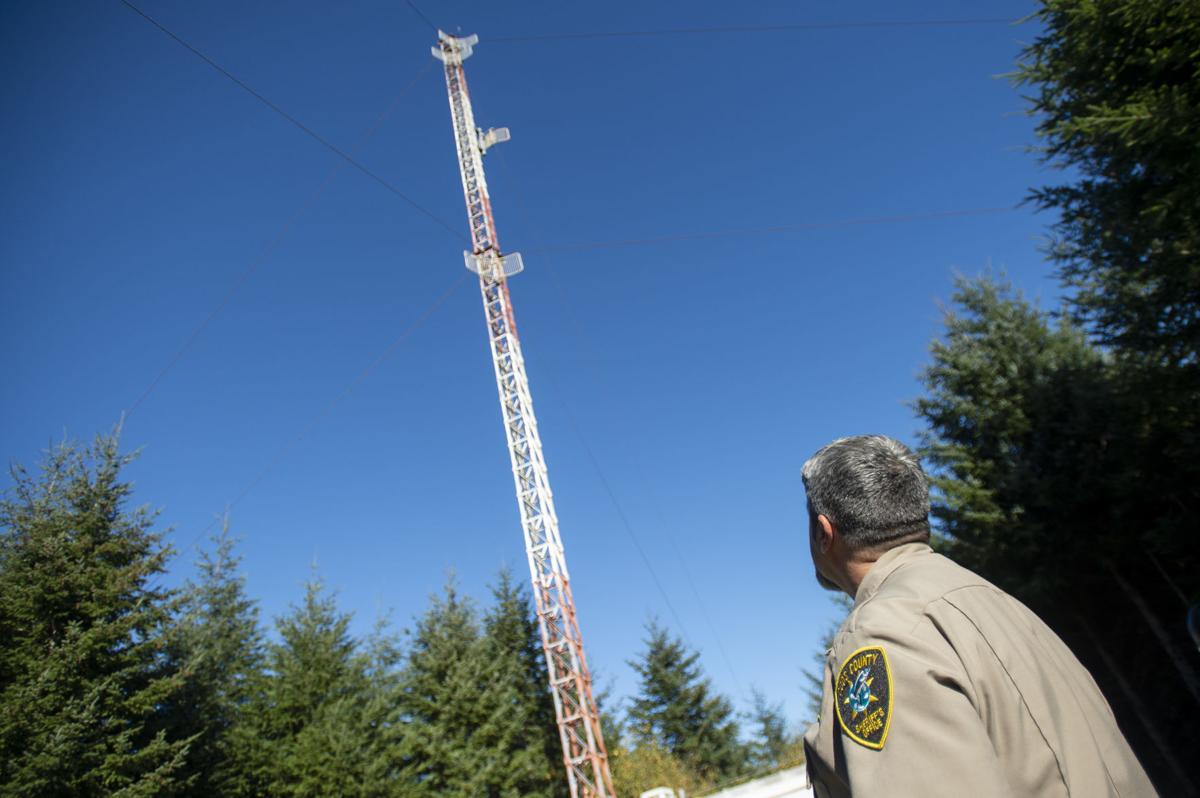 Cpt. Gabriel Fabrizio of the Coos County Sheriff's Office looks up at an unused radio tower south of Coos Bay that the department hopes to purchase. 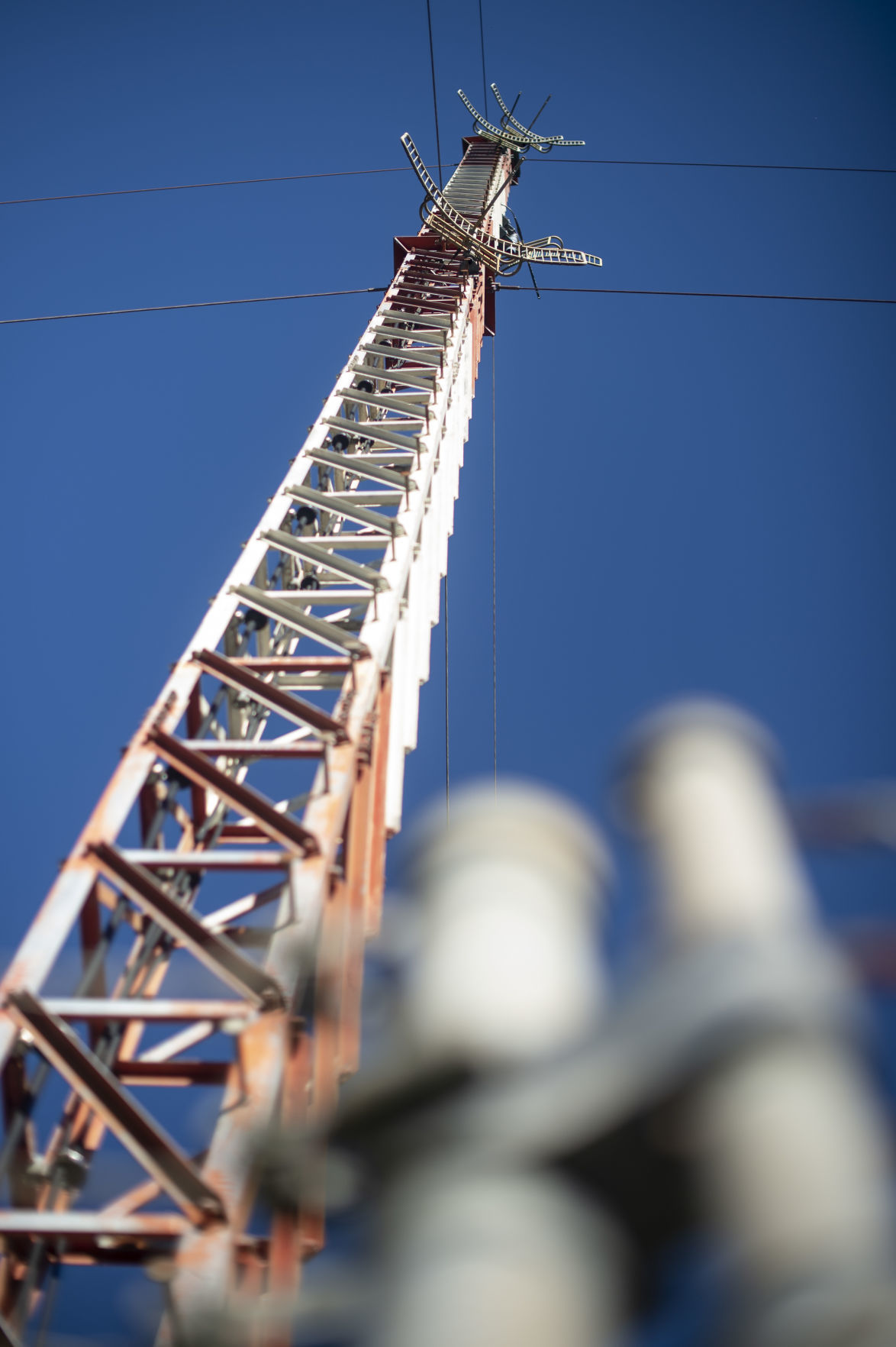 COOS COUNTY — The Coos County Sheriff’s Office is looking to replace its failing radio towers this year by asking voters to approve a local option tax levy which will be used to update its nearly 20-year-old radio system.

The Sheriff’s Office, which has been meeting for months with dozens of the county’s first-responders, city officials and commissioners, wants to put a five-year levy on the May ballot, asking for 20 cents per $1,000 of assessed value.

With limited budget funds and grant money available, CCSO Cpt. Gabriel Fabrizio said the tax levy being considered is the department’s last option in replacing and repairing its 911 radio towers.

According to Fabrizio, the majority of grant monies currently available are for upgrades to digital communication systems, which he said the county does not have. The costs of converting to a digital system would be significantly higher, and with the county’s diverse terrain would involve adding a larger amount of radio sites.

“We could go digital, but we would have to add at minimum an additional six to eight radio sites and that’s just a guess. It could be as much as 40,” Fabrizio said. “With this plan we’re going from six to 11 towers, which is still only two-thirds of what we need to go digital. And our system is digital capable.”

“If we decide in the future we wanted to build those additional sites, find land, buy it and build on it, then we would be able to integrate into the new system.”

Over the past several months, the towers, which are spread out around the county, have failed more than four different times, Fabrizio said.

“They keep going down,” said Fabrizio. “There are so many integral parts to the system, such as its GPS units, DC rectifiers, (battery power converters), radios as well as a wide display of additional equipment that has at one point or another failed on different towers.”

Last October, one of the Sheriff’s Office main radio towers shut down after a number of its electrical devices gave out, causing a disruption in its communication transmissions for more than 24 hours.

First-responders on duty were unable to communicate with dispatchers as well as with one another over the radio system, which created a number of risky, unsafe scenarios for dozens of law enforcement officers, firefighters and medical personnel who rely on the communication system to relay information, Fabrizio said.

“We had to adjust our procedures,” he said. “We had to page information out over a telephone base system as opposed to real-time radios. Once (first-responders) were on scene, they couldn’t talk back to us to get additional information, they couldn’t relay information to us, and they couldn’t ask for more help or even ask for resources (over the radio system). It just really delays everything.”

According to Fabrizio, during the times of outages, deputies and other first-responders have been able to use the county’s Everbridge program, an emergency notification system, to talk to one another. The program works by sending voice and text alerts to people who have registered their cellphones, landlines and email accounts to receive its notifications.

Although a valuable tool for its deputies, the program isn’t the solution to its communication problems, Fabrizio said. A new reliable, stable radio communication system is what’s needed for emergency personnel to do their jobs, he added.

For the past two years, the Coos County Sheriff’s Office has worked to update its entire dispatch center and communication systems. In January 2019, the department, which was awarded a Homeland Security Grant, was able to purchase new portable, handheld and in-car mobile radios.

The department also purchased new radio consoles and computer servers to support its updated equipment. With parts on the radio towers being over 20 years old and mostly discontinued, finding replacement pieces has proven to be a major challenge for the Sheriff's Office.

On many different occasions, parts have either been purchased from e-Bay or pulled from other towers as a temporary fix.

The last item on its communication system overhaul, and notably the most expensive portion was to update its radio towers, said Fabrizio.

Cutting down on costs

Last year, engineering firm Codan Communications and Microwave Networks completed an inspection and study of the department’s radio towers, which identified a number of things that needed to be changed and replaced to update the Sheriff’s Office radio towers.

The total costs to replace and update the radio towers has been estimated to be about $4.1 million. In a previous interview with The World, Fabrizio said the Sheriff’s Office omitted the tower updates from its 2019-2020 budget, as it recognized it would be too much of a financial burden for the county to take on.

As a way to cut down on costs as well as increase its potential radio coverage, the Sheriff’s Office early on teamed up with The Coos Forest Protective Association and The Bureau of Land Management to cross load its equipment and share towers.

CFPA District Manager Michael Robison, who has been consulting with the Sheriff’s Office for months, said it’s been amazing to see all of the county’s emergency response agencies as well as numerous county and city officials come together to help make the improvement project happen.

“The ultimate goal is to empower us to have a system that doesn’t cost a ton of money and that does what we want it to do,” Robison said. “We have to make sure we have safety for the public and safety for (the first-responders) — that’s our driving force.”

Recently, the county included the cities of Coos Bay and North Bend, which operate their own radio towers, to join its efforts. The proposed levy will overall support 16 fire agencies and 12 law enforcement agencies around the county as well as the Coos County Road Department, Fabrizio said.

The radio system replacement would also include upgrades to Coos Bay and North Bend’s police and fire departments. A new technician position, stationed on the South Coast, will also be created as part of the overall updated radio system plan.

The technician, who will be overseen by CFPA, will be a shared position between the county's numerous law enforcement and fire department agencies to call on when the radio towers are in need of maintenance services.

According to Fabrizio, the new position will save the Sheriff's Office an estimated $138,000 per year, which is the amount he said the department currently spends on both maintenance services and on leasing space on two radio towers.

As technology changes over time and its equipment begins to age, Fabrizio said the department will once again evaluate what the next step moving forward will be to ensure the Sheriff’s Office has reliable communication services.

The five-year levy also includes a built-in maintenance fund, which is only to be used for maintenance purposes. Following Oregon statute, any funds remaining after the replacement is completed will go solely toward its maintenance, said Fabrizio. The new equipment is expected to last for the next 15 to 20 years, he added.

If the levy passes, work is likely to begin later this summer. A series of town hall meetings aimed at informing voters of the levy will take place throughout the county in the coming months, Fabrizio said.

The Sheriff’s Office is scheduled to meet with Coos County Commissioners on Monday, Feb. 24, at the Coos County Courthouse to review the ballot measure one more time and to finalize its verbiage.

The county has until Feb. 28 to submit the ballot in order to make it for May’s election.