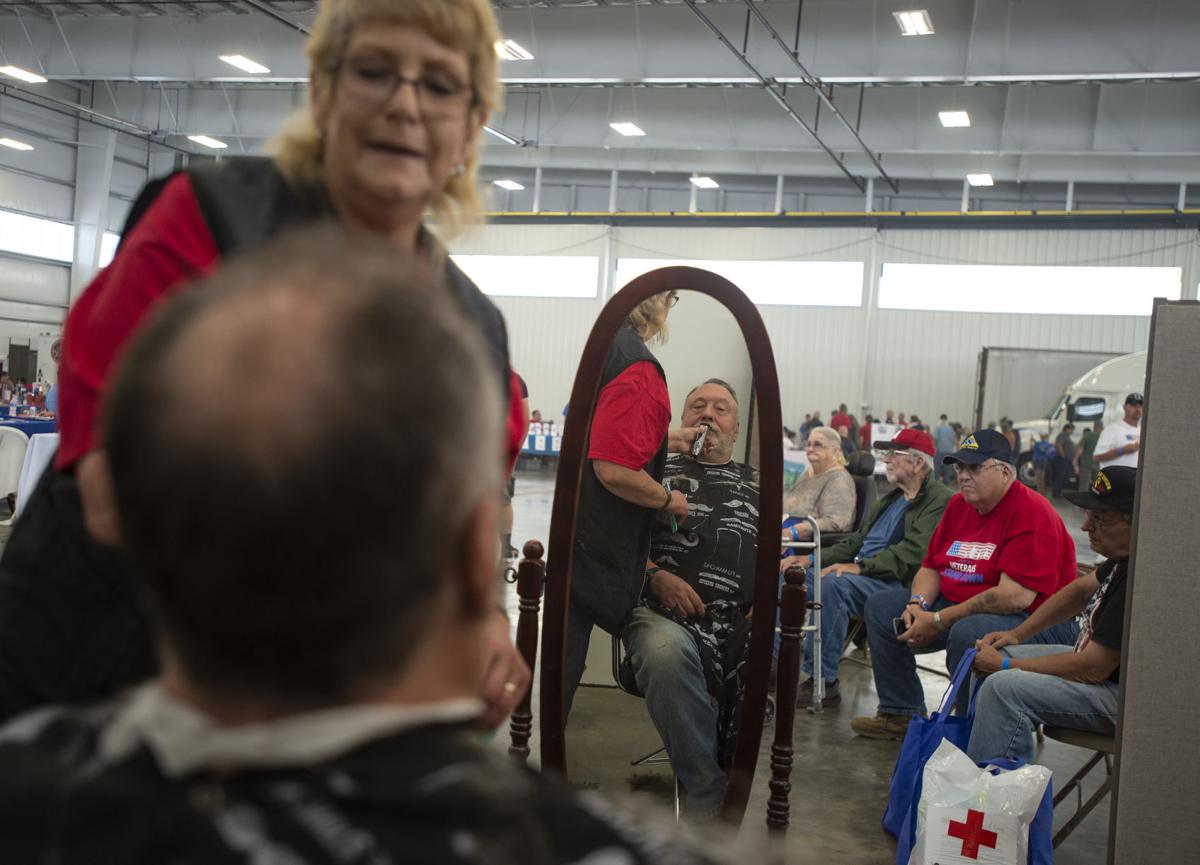 Volunteer Jan Cotner with Pony Village Beauty Salon trims Randy McKay's beard after cutting his hair Friday, Aug. 16, during the 10th annual Veterans Stand Down at North Bend Airport Hangar 1. McKay, a Coast Guard veteran, was among hundreds of other veterans to attend the event. 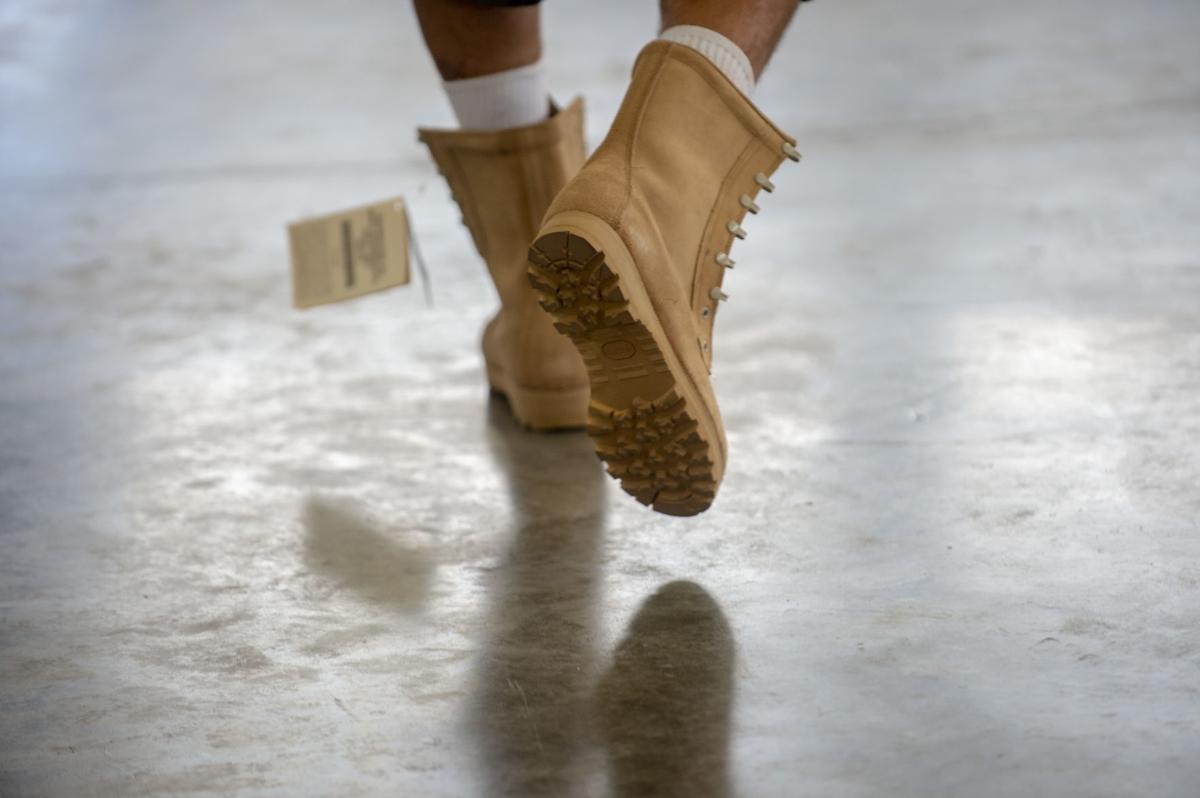 U.S. Air Force veteran Joseph Hinojosa walks through North Bend Airport Hangar 1 wearing a brand new pair of waterproof boots given to him during the 10th annual Veterans Stand Down in North Bend on Friday, Aug. 16. 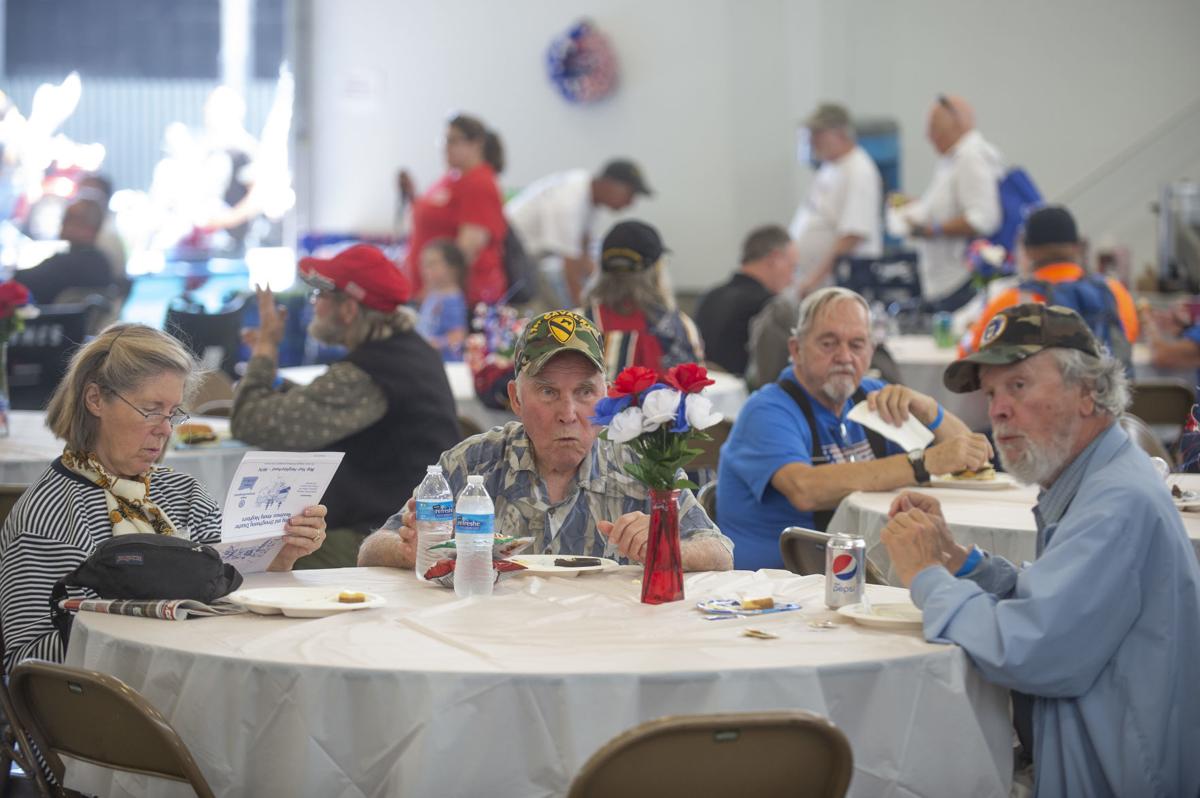 “And we’re not even at the halfway point,” said Jim Brann from the Eugene Veterans Center.

The Friday, Aug. 16 event was the largest Veteran Stand Down per capita in the state, connecting veterans to services, housing and employment. In fact, Brann said the crowd seen in the afternoon was almost as big as the one in Eugene.

“Most other Stand Downs are half this size, like the one in Roseburg,” Brann said. “The one in Portland is mostly just a job fair. This Stand Down is what it is because of volunteers and non-profits, since they are the ones who put this on.”

Operation Rebuild Hope, which exists to help veterans, is now a staple for the event. Under its umbrella is Bryan’s Home, which serves homeless veterans. Founder of both organizations, Patrick Wright, was energized by the number of veterans he already met with on Friday.

“Operation Rebuild Hope first came to the Stand Down three years ago unorganized and without business cards,” Wright remembered. “For a non-profit trying to reach out to veterans and get started, this event was instrumental. This gave us our start. We’ve been here every year since then and will be here every year from now on.”

“Already this year we’ve handed out a ton,” Wright said. “We’ve seen eight homeless vets so far. Three homeless veterans want to start a Homeless Veterans Fishing company and asked if we had property they can camp on. We don’t, but in the future that might be something we do.”

According to Wright, there are roughly 400 homeless veterans in Coos County. For Operation Rebuild Hope, the goal is to prevent homelessness by doing home repairs.

“Vets find themselves homeless because they can’t afford or can’t do repairs on their home, which collapses down around them and then they have a condemned house,” Wright said. “They are already on a fixed income, so they don’t have the money to buy another house or put down money on an apartment, so they are stuck. They end up homeless.”

On the other hand, some veterans end up on the streets because their PTSD isn’t being treated so they end up treating it through self-medication. That is a situation Wright knows well, one that he was in himself.

The Marine Corps veteran was an infantry man, fought his way through combat situations, came home and became homeless.

“I self-medicated with drugs and alcohol,” Wright said. “Everything our veterans are going through, I understand because I was in that situation. I’ve talked to some vets and they are stand-offish with me, but when I tell them I was homeless once too they get more comfortable.”

The mission of Operation Rebuild Hope and Bryan’s Home is to “show them there’s a better way to live, that they can still make a difference in the world,” Wright said. “The Stand Down is instrumental in getting veterans connected to all services. I think we put on the best Stand Down in the entire state, which shows how passionate our community is about helping.”

The annual Veteran’s Stand Down helped 400 veterans last year and is back to help even more this year.