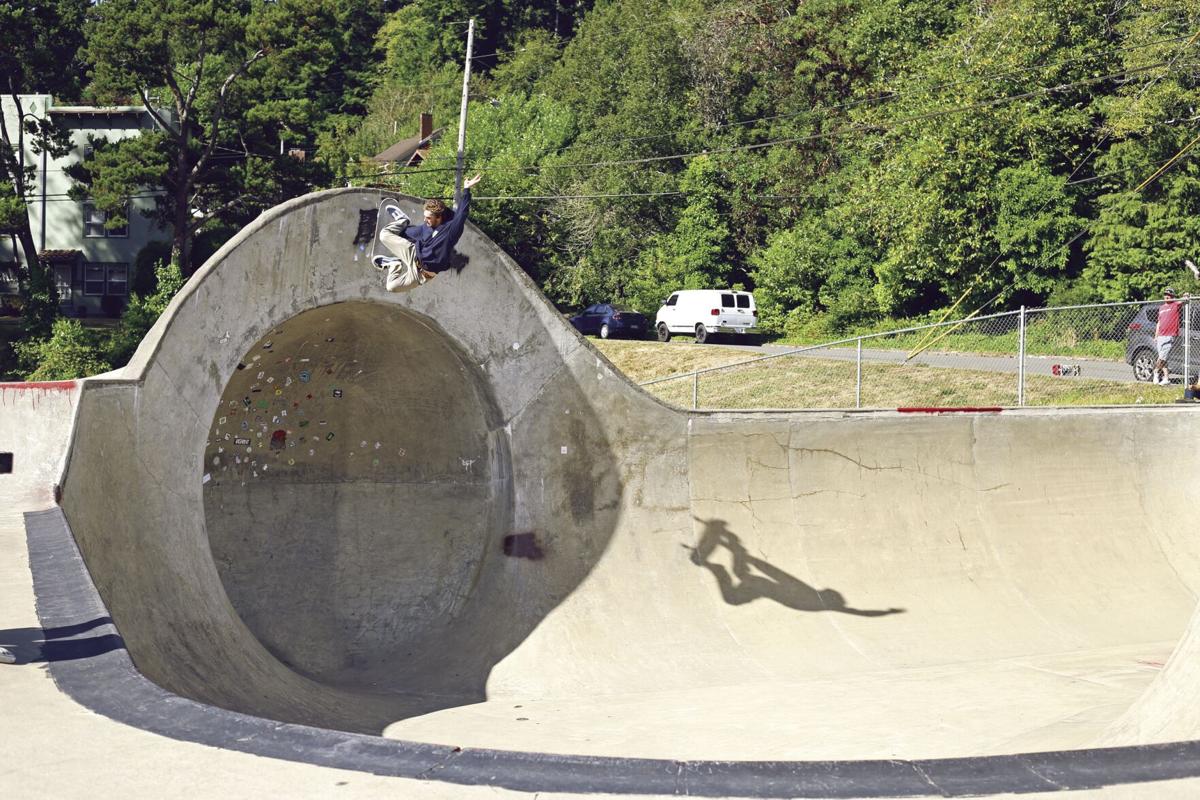 Tom Schaar rides in the Coos Bay skate park. This photo was used in an advertisement in Thrasher Magazine. 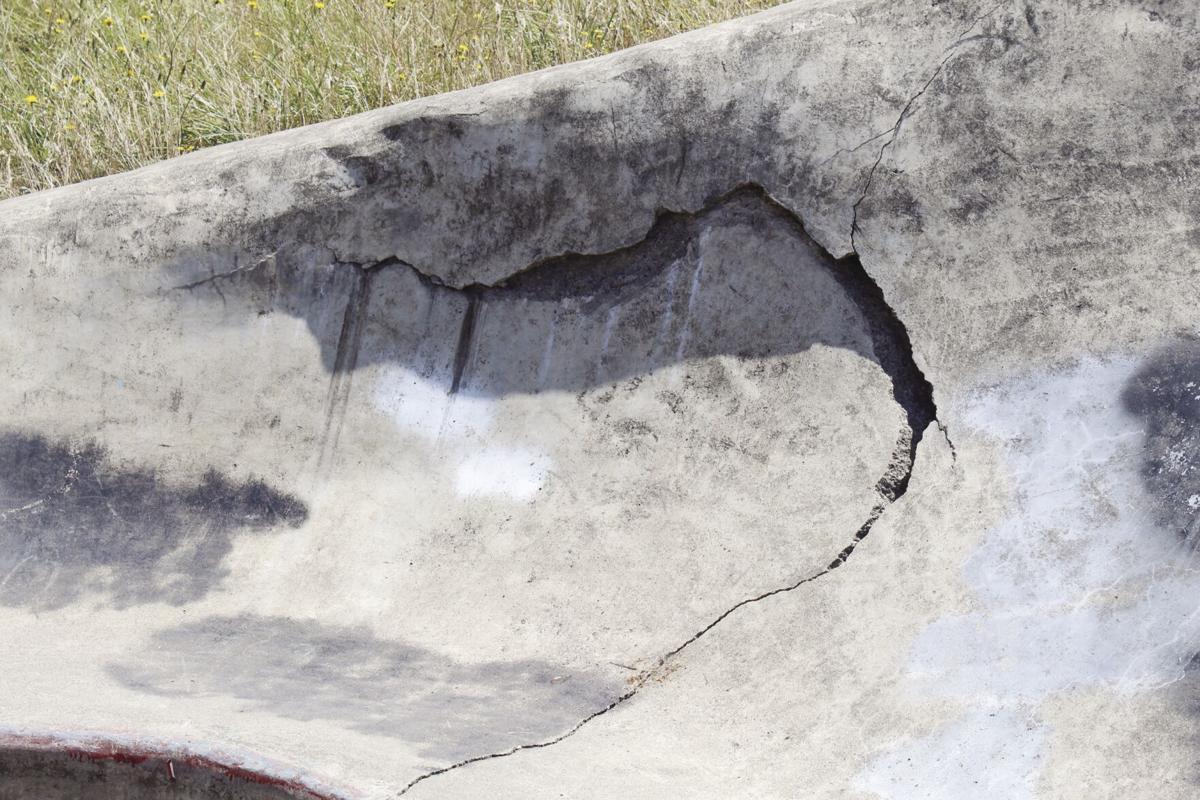 As the foundation has settled, large cracks have begun to destroy the concrete holding the skate park

Tom Schaar rides in the Coos Bay skate park. This photo was used in an advertisement in Thrasher Magazine.

As the foundation has settled, large cracks have begun to destroy the concrete holding the skate park

For Tristen Reasor, having a quality skate park in Coos Bay is personal.

He was part of the group that volunteered years ago to help build the skate park, and he has used it hundreds of time through the years.

So, when he was informed it was in shambles, he decided to do something about it.

“I was one of the builders of this place,” he said last week, pointing at the skate park in Mingus Park. “There were six of us who started and worked on the place.”

That work ended when the skate park opened in 2009, and it immediately attracted some of the best skateboarders in the world.

“People travel here from all over,” Reasor said. “It’s also been featured in Thrasher Magazine twice.” The most recent, was their June 2021 issue.

In 2019, Reasor was notified that the tile, or coping, at the top of the bowls at the park was falling apart. When he went to investigate, he learned people riding scooters and bikes at the park had destroyed the tile. Approximately 20 feet were missing or destroyed. When he contacted the city, they informed him that they were closing the park for safety reasons. He then took it upon himself to do something.

With the permission of the city, the skate park was closed down for a month last year, and Reasor became a volunteer. He replaced around 70 of the tiles during that time.

Reasor said he decided to do the work himself because it takes someone with special skills and knowledge to properly do the work.

After replacing some of the coping last year, Reaso worked with the city and got permission to continue work this year. The skate park closed again in June, and Reasor and a small number of volunteers have been working to put new coping around the entire park.

Since June 22, Reasor has been at the park almost every day doing the work. It is slow going, but he is making progress.

While the coping will take care of the immediate needs, Reasor also found some other major problems at the park. Since the park was built and opened in 2009, the ground around it has settled, which has caused cracking in the concrete. The cracking is extensive and eventually will cause the park to fail if not repaired.

Again, Reasor decided it was up to him to do something, so with the help from a few members of the community they started a nonprofit, the Coos Bay Skatepark Association. With four board members, the association applied for and was recently approved as a 501C3 nonprofit.

“There’s a lot of room for this to settle,” Reasor said. “It’s going to be an expensive repair.”

Reasor said since the park opened, the land around it has sunk six to 12 inches. Add to that the main feature the "cradle" weighs approximately 120,000 pounds, and the damage to the base is pretty extensive.

Once the repairs on the coping are finished, the park will reopen. But ultimately more work will be needed. Reasor hopes the new nonprofit will be able to raise money to keep the city from having to fund the repairs.

“We will be doing fundraising and we will be pushing out more information,” Reasor said. “First and foremost, we’re focusing on repairing the park and making sure it lasts. If this isn’t repaired, it will fail.”

Ultimately, Reasor has even bigger goals. He said the skatepark as it sits now is designed for experienced skaters. New skaters have few options in the city to learn on. The park is also not designed for people on scooters and bikes, but Reasor thinks they should have a place to enjoy as well.

His long-term goal is to be able to expand the park to include activities for new and moderate-level skaters as well as things for those riding scooters and bike.

“This place wasn’t designed for them, it was designed for skateboards,” Reasor said. “I still think they deserve a place to ride, so that’s the next step for the nonprofit. What we have here is professional skateboard level. We don’t have a lot of beginner or intermediate. We have an amazing deep end, but we don’t have anything for youth.”

The work Reasor is doing now is costing the city almost nothing. Reasor is providing the labor and Scott Cooper with AYA made a donation to the city to cover materials.

Reasor said there is about a five-year window to begin the major repairs before it is too late to fix the park. And, in his opinion, it is worth fixing. He said between 20 and 30 people use the skate park every day, and because it is so well designed, it draws tourists from outside the area.

“There’s a whole series of skate parks along the coast people travel for. There’s a huge tourism industry among skateboarders, and they stop at the park because of the cradle.”

Reasor hopes to finish the work on the coping in the coming weeks, with the park reopening early in August. He will then turn his focus to the future, with a goal for preserving the skate park for decades.