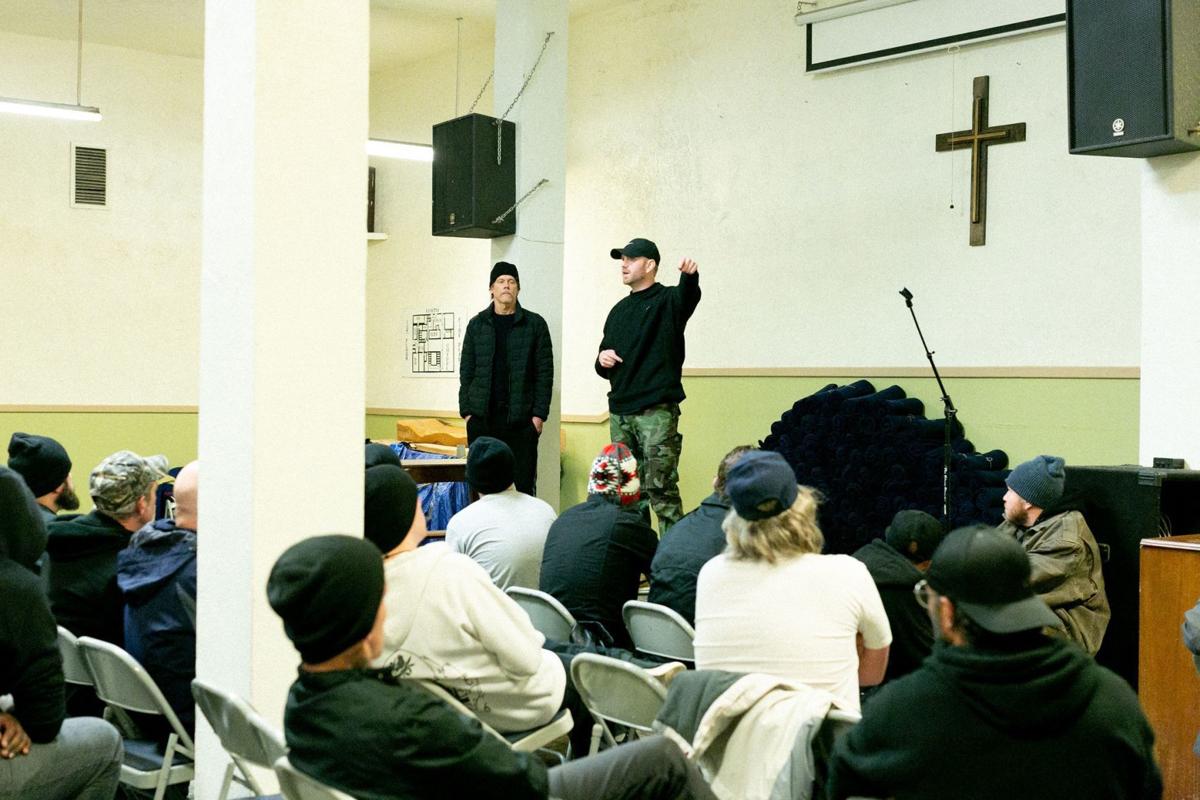 Bob Dalton speaks at a homeless shelter in Utah before handing out hundreds of free blankets from his company Sackcloth & Ashes. 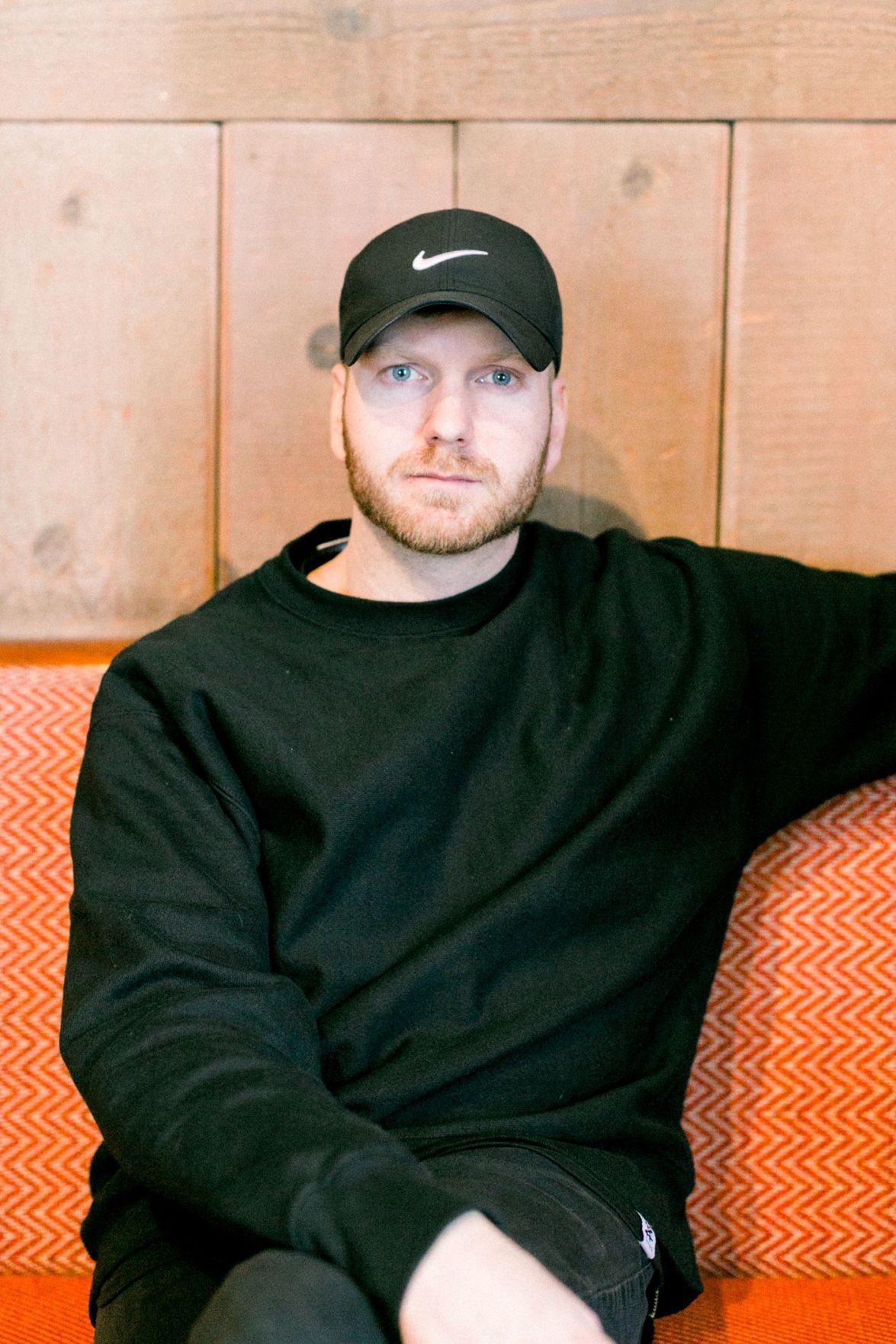 Coos Bay native Bob Dalton was inspired by his mother's experience with homelessness and founded Sackcloth & Ashes, a company that donates blankets to homeless shelters around the country.

COOS BAY — A simple straightforward question stared Bob Dalton down as he sat leaned back in his car pondering what he was going to do next: "What are you waiting for?"

“I was having this kind of ‘What is the meaning of life moment,’” Dalton said. “My mom was going through this tough time and I was applying for jobs and no one was getting back to me. I look up and on my knee is my coffee cup and on the sleeve it said, ‘What are you waiting for?’”

Coos Bay native Bob Dalton was inspired by his mother's experience with homelessness and founded Sackcloth & Ashes, a company that donates…

It was then that Dalton knew he had to make a change and put his ideas and plans into action. In 2014, Dalton learned his mother, who relocated from Coos Bay to Florida, had been living on the streets unexpectedly as she found herself without a place to live.

“My mom is the hardest working person I know,” he said. “She had two college degrees, managed restaurants and raised my sister and I primarily by herself. The fact that she was living homeless taught me that not all people choose to become homeless and that some people just need a second chance.”

Inspired by his mother, Dalton sought to open a company that would not only help the homeless community directly, but also shine a light on those working day-in and day-out to help solve the issue of homelessness around the country.

He soon founded Sackcloth & Ashes, a blanket company that donates a blanket to a local homeless shelter each time a customer places an order. On a mission, Dalton purchased fabric, enlisted the help of his best friend Jordan Tardie and a local seamstress, Tammy Stanton, to help kick start the company.

“I hustled up and down the Oregon coast and got us into 20 shops,” said Dalton. “I hired the best photographers I knew and we launched our website June 2014.”

Since then, Sackcloth & Ashes has donated about 80,000 blankets to over 500 shelters around the country.

“I want to use our platform to highlight and celebrate the people who are helping to change the issue of homelessness,” Dalton said. “The blankets work as our connector to those people and shelters. We’re hoping to shine a light on their work and document what those shelters are doing at the ground level.”

Last year, Dalton’s company launched its “Blanket the United States” campaign, which hopes to donate a million blankets to homeless shelters throughout the U.S. by 2024. Dalton said he plans on achieving this massive goal by strengthening and building new and existing partnerships with an array of companies, customers and social media influencers.

Using the power and reach of social media, Dalton was able to propel his company early on with a feature on Instagram’s official account. From then on, he’s been able to form partnerships with businesses including Capitol Subaru in Salem and nationwide-retailer World Market, which recently ordered 15,000 blankets from them marking his company’s highest order to date.

Dalton, who grew up in the Empire District, credits local ministry group Young Life and its area director Todd Tardie as being a major influence on his life and helping equip him with the skills he needed to succeed.

“Todd became my mentor my junior year at Marshfield High School,” he said. “I grew up without a father and he became that father figure for me. He just taught me so much about leadership, God, family, love and serving others.”

At 19 years old, Dalton said it was Todd who empowered him to follow his dreams and sharpen his entrepreneurial skills by helping him develop a confidence he still carries with him today. Before opening his own business, Dalton worked as a Young Life program leader in Monmouth, Oregon where he helped create a new chapter there.

“It was an honor to sit under his leadership,” Dalton said. “He is still going out the high schools and impacting and influencing hundreds of kids for the better. I went from a kid not knowing what I wanted to do to having the confidence of wanting to change the world and it’s because people like Todd who believed in me.”

As his company continues to grow, so does his commitment with highlighting local homeless shelters. With its blanket drop events, Dalton will travel with a media crew to document blanket handouts and the work local shelters and homeless advocates are doing around the U.S.

While Dalton’s company is based out of Salem and his frequent travels take him outside of Oregon, he will oftentimes schedule multiple trips back to Coos Bay.

“I want everyone that grows up in Coos Bay to know they can change the world,” he said. “If you can dream it then you can do it.”