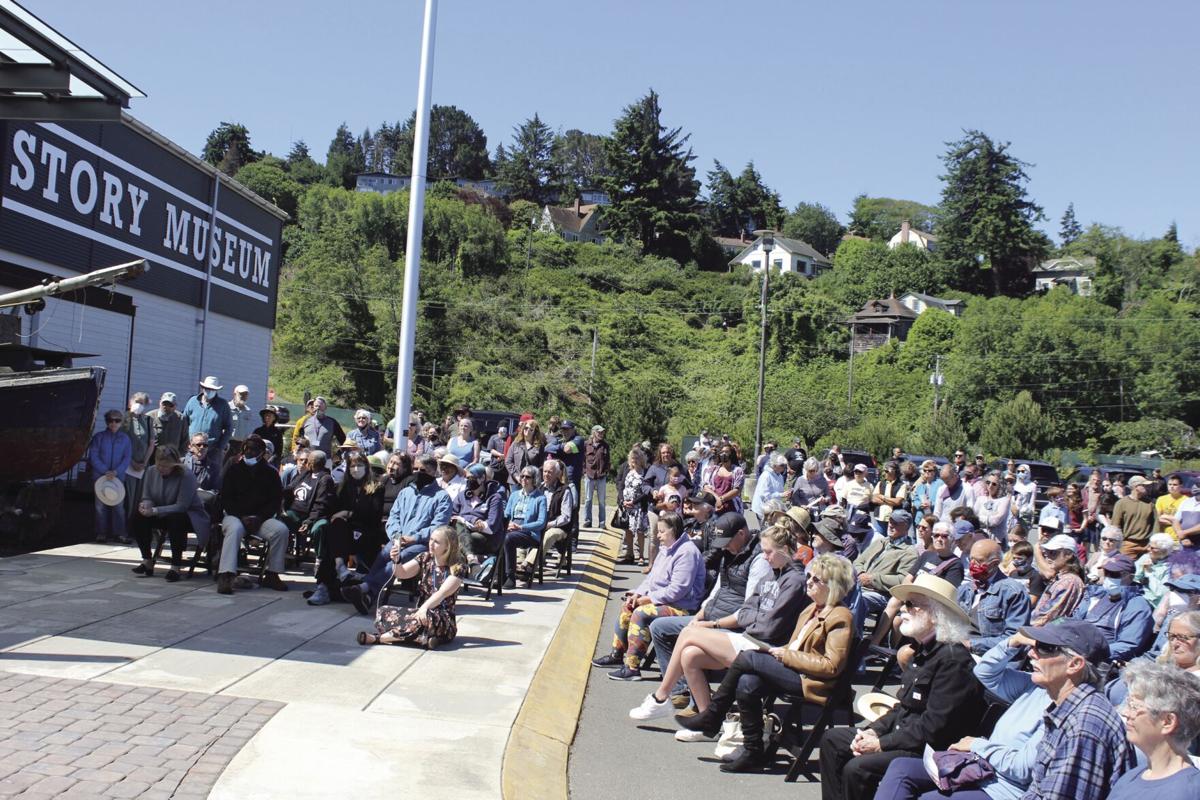 A standing-room-only crowd participated in a ceremony unveiling a historical marker remembering the lynching of Alonzo Tucker. 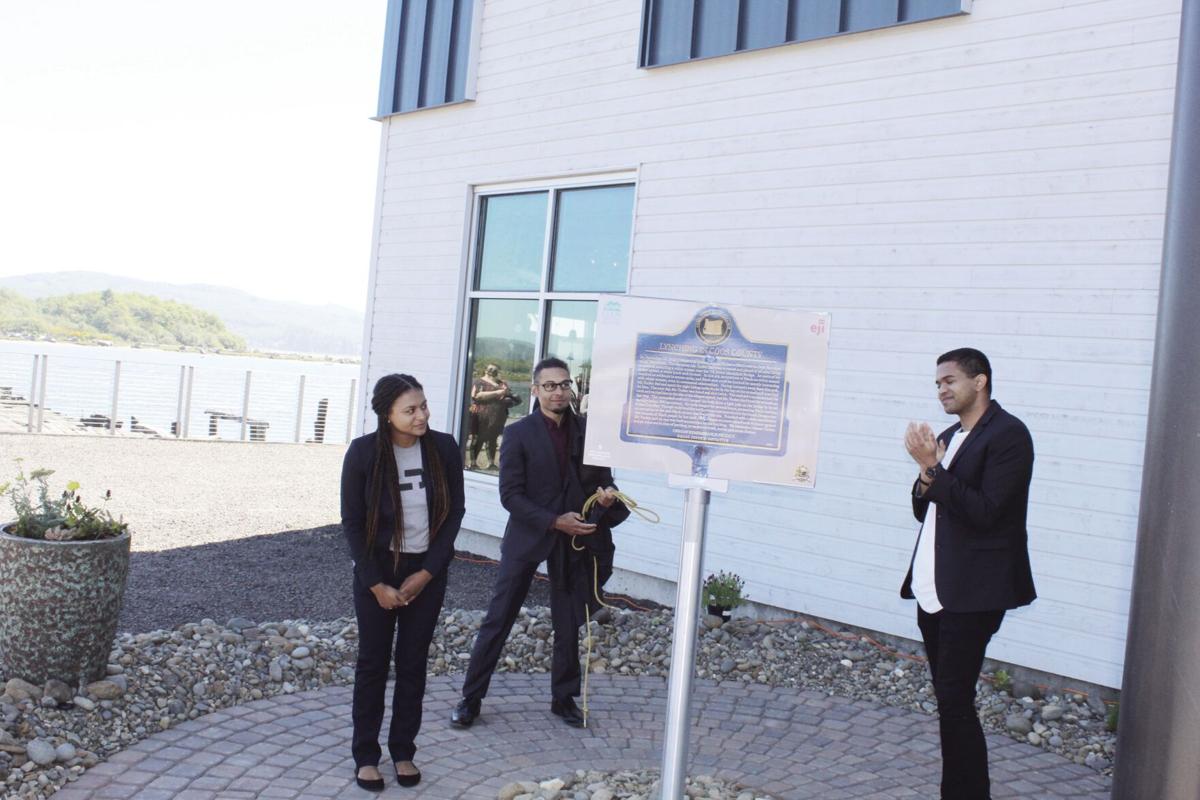 A historical marker remembering the lynching of Alonzo Tucker will forever be in place in front of the Coos History Museum.

A standing-room-only crowd participated in a ceremony unveiling a historical marker remembering the lynching of Alonzo Tucker.

A historical marker remembering the lynching of Alonzo Tucker will forever be in place in front of the Coos History Museum.

Coos Bay faced one of its ugliest moments during a moving ceremony Saturday that honored Alonzo Tucker more than 119 years after he was lynched and celebrated the first Juneteenth ceremony along the Oregon Coast.

The Coos History Museum hosted its first Juneteenth celebration as a standing-room-only crowd gathered to remember Tucker, who was killed and lynched in 1902. The ceremony concluded a three-year-long effort to remember the lynching, which is on the only documented lynching on Oregon. The ceremony concluded with the unveiling of a historical marker at the museum that remembered Tucker and the country's history of lynching.

Bishop Laurie Larson Caesar with the Oregon Synod of the Evangelical Lutheran Church in America set the tone for the ceremony during the opening prayer.

"This is an important day and this is a crucial moment," Larson said. "Our spiritual ancestors teach us we must treat our spiritual bodies like we do our physical bodies. We must name the hidden horrors of our past before we can even think of healing."

Facing the past and calling out racism were the major themes of the day as a variety of guests recalled Tucker's final days.

In 1902, Alonzo Tucker was one of a handful of Blacks living in the area. He owned a boxing gym and often trained on the beach. On Sept. 17, 1902, Tucker was accused of sexually assaulting a white woman. He was arrested and put in jail. After the arrest, a mob of mostly white men descended on the jail and demanded Tucker. Police were able to get him out of the jail, but a boat to take him to Roseburg was delayed. Tucker escaped and spent the night hiding under docks to avoid the mob. The next day, he was found by two boys and was eventually shot in the leg and the torso. The mob, estimated at 300 people, dragged Tucker to the 7th Street bridge, where they hung his body in public.

Because it was determined he has escaped from custody, no one was ever charged with his killing or the lynching.

"We must call out racism in order to end it," Wyden wrote. "We must learn history, so we're not doomed to repeat it."

"We must do everything in our power to right the wrongs of our history," DeFazio wrote. "It is our duty. Reckoning with our systemic racism will require us to look inward. The brutality of racism is not limited to the South."

The Equal Justice Initiative, which creates historical markers across the country, made the marker that will be at the museum. Keiana West, a justice fellow with the EJI, said the organization has verified more than 6,400 lynchings in the United States, many outside of the South.

"It can be easy for non-Southern states to try to distance themselves from this history, when it reality it was the whole country involved," West said.

She said the EJI is leading the effort to face American history as a step toward reconciliation.

"We believe the work is necessary to bring in an era of peace and justice," West said. "It will not be easy to understand the history of racism. May we take a moment to think what can we do to make justice a verb and an action.”

Zachary Stocks, the executive director of Oregon Black Pioneers, said other Black men in Oregon were likely lynched. At the time Tucker was lynched, only 1,100 Black people lived in the state. When Oregon joined the United States, it had laws outlawing Black people.

"Alonzo Tucker's story was never swept under the rug, but it was overlooked," Stocks said. "It is entirely possible several Black men in Oregon have been lynched under different names."

Stocks said placing the memorial marker is a start in facing racism in Oregon.

"This memorial will help to rewrite that story," he said. "This marker is the truth teller. It doesn't end with Alonzo Tucker. No longer can we ignore the stories that challenge happy narratives. This is not a shaming effort. This is a healing effort."

Taylor Stewart with the Oregon Remembrance Project has been working with the city and the museum for three years to have a historical marker placed.

Stewart said the marker is a start to the "truth telling" that is necessary in Oregon and across the nation.

"We find out recognition of this lynching not by remembering, but by how that remembering changes us," Stewart said.

Stewart went on to say while lynching have stopped, another thing has replaced it. He said the death penalty became popular when lynchings stopped, adding the vast majority of people sentenced to death and executed are Black men.

"The color of your skin still plays a crucial role in whether society thinks you deserve death or not," Stewart said. "We are still trying to kill innocent Black men. The legacy of lynching and the power of the noose are still alive. Today, they just look a little different. We are burdened by our history of injustice and, more importantly, we are burdened by our history of silence and inaction."

Stewart challenged the crowd Saturday to join him and work to end the death penalty in Oregon. He said to reach reconciliation, we as a people must first face the truth, then repair the damage before reconciliation may take place.

The actual historical marker that will be placed at the museum was delayed in transit so a photo was used for the ceremony Saturday. Later Saturday afternoon, the marker arrived and was put into place during the Juneteenth celebration.