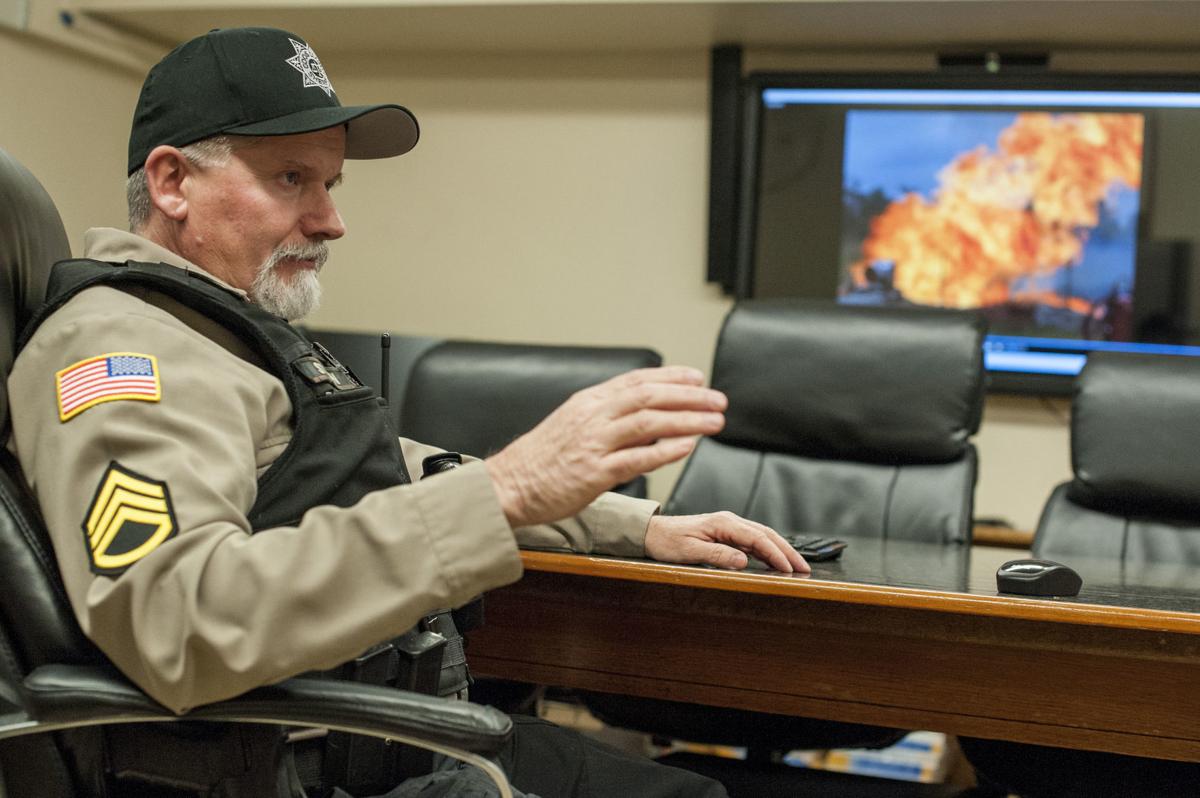 Staff Sergeant Doug Strain talks Thursday about the Combined Services Unit, a contracted security team with the Coos County Sheriff's Department that will work with Jordan Cove if the LNG project gets a green light. 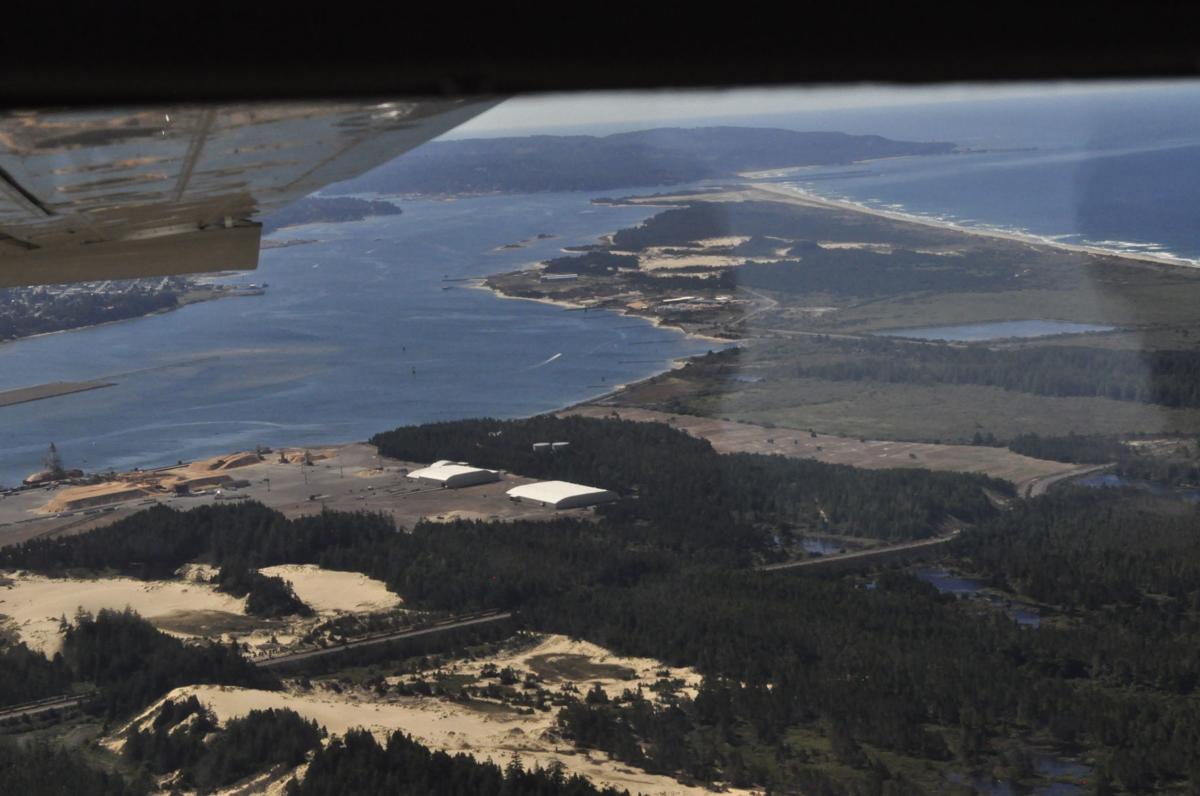 An aerial view of the land on the North Spit of Coos Bay, taken Sept. 20, where the proposed Jordan Cove LNG export terminal would be. 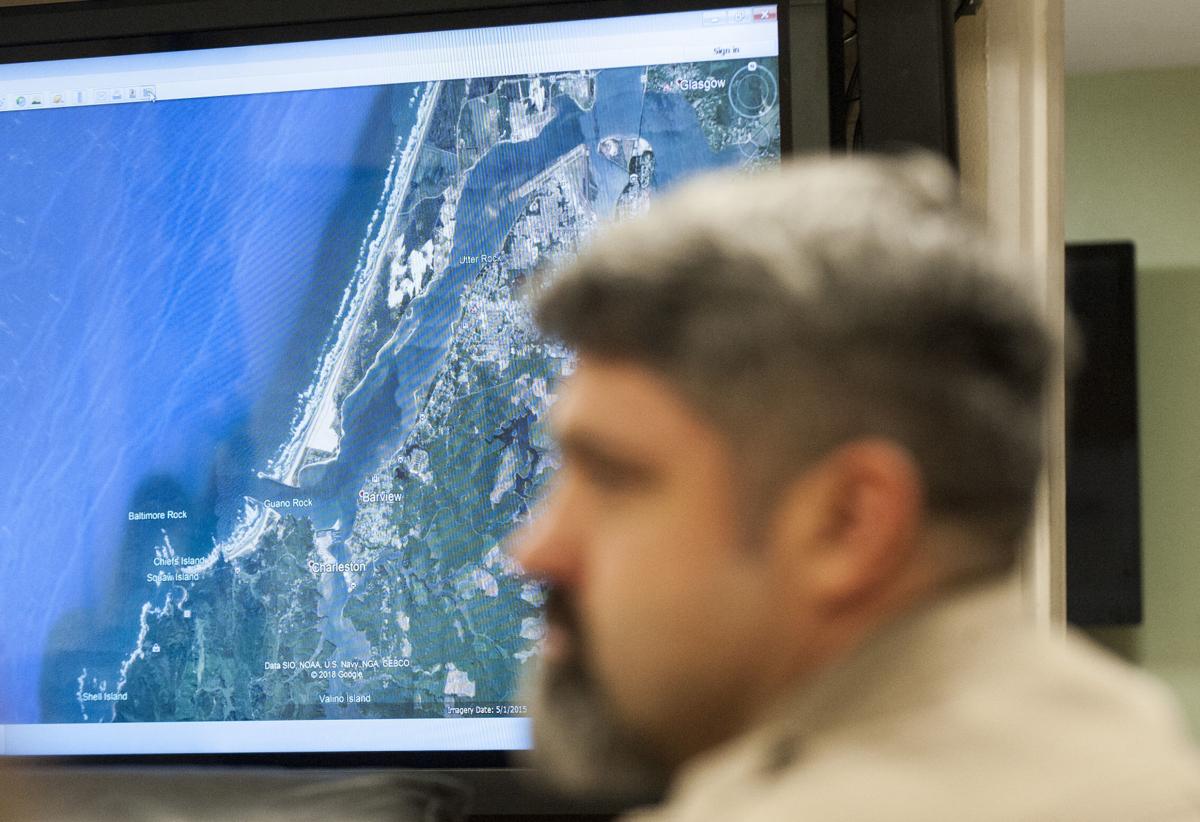 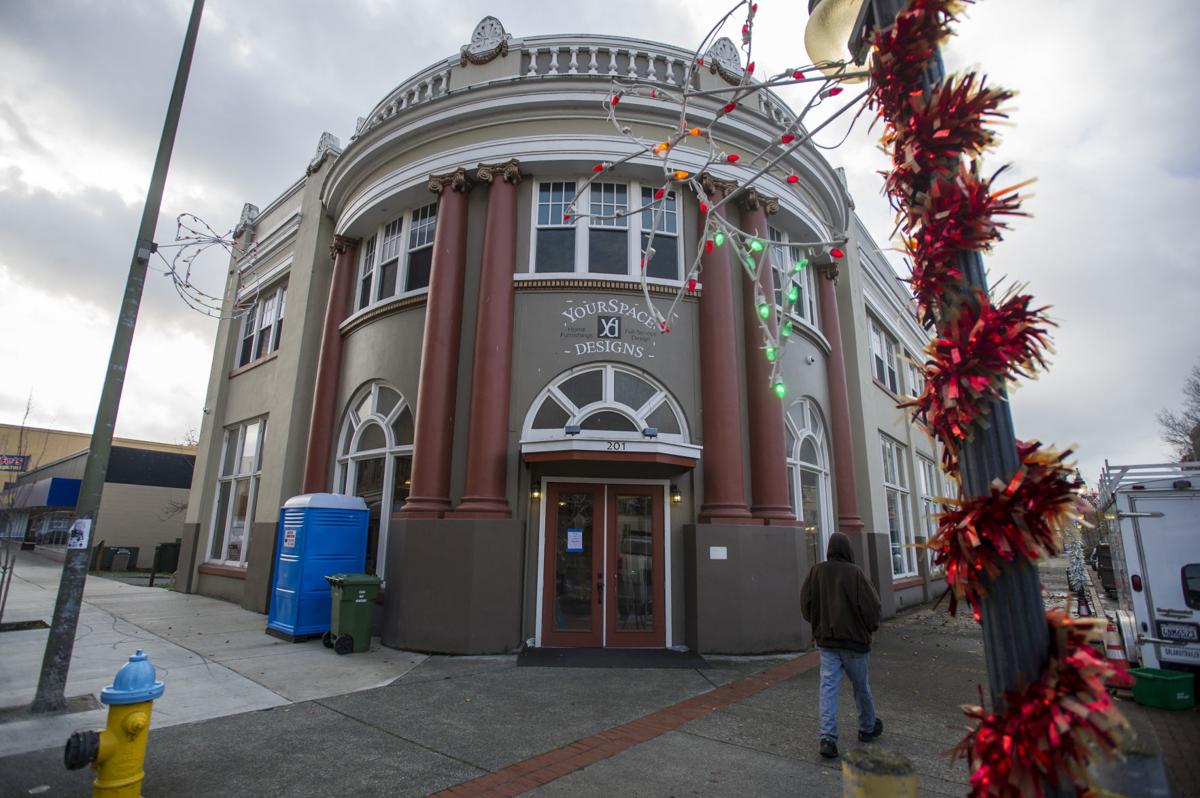 A man walks past 201 Central Ave., Coos Bay, when contractors were preparing the space for the offices of Jordan Cove LNG in 2018. 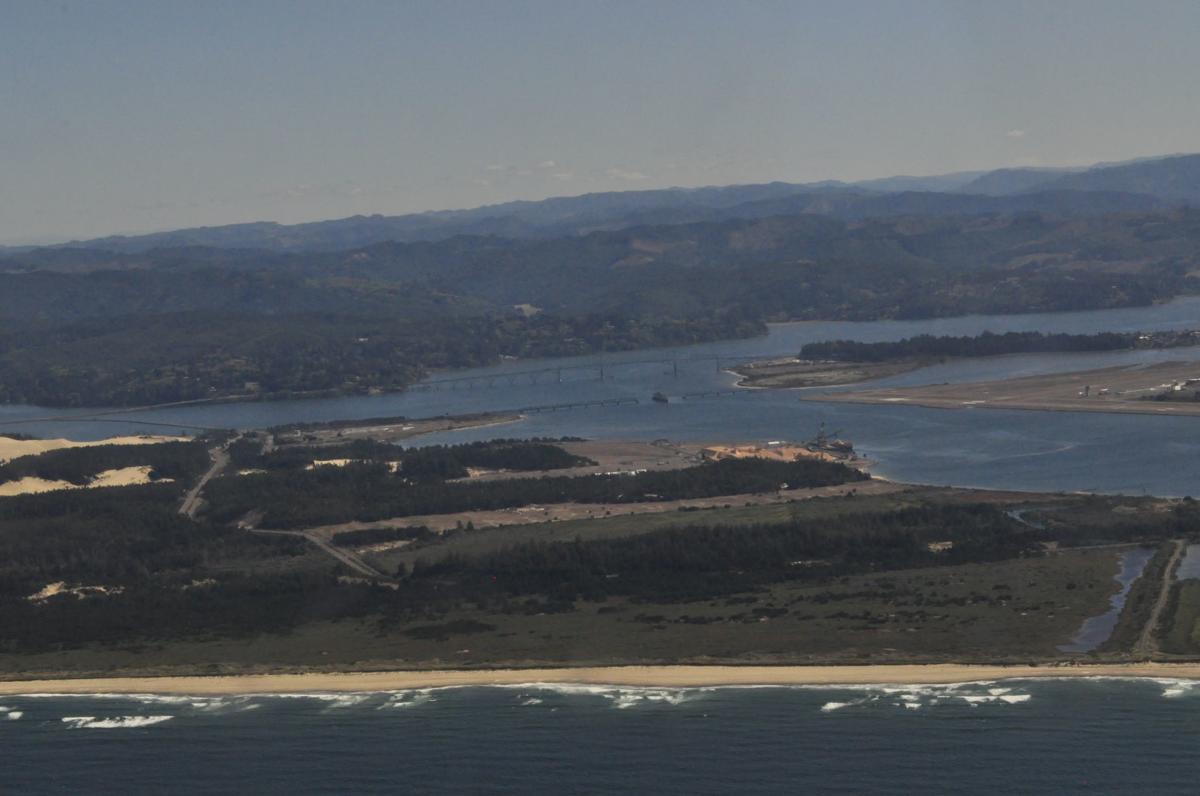 A look from outside of Coos Bay at Jordan Cove, where Canadian energy company Pembina plans to build its LNG export terminal. 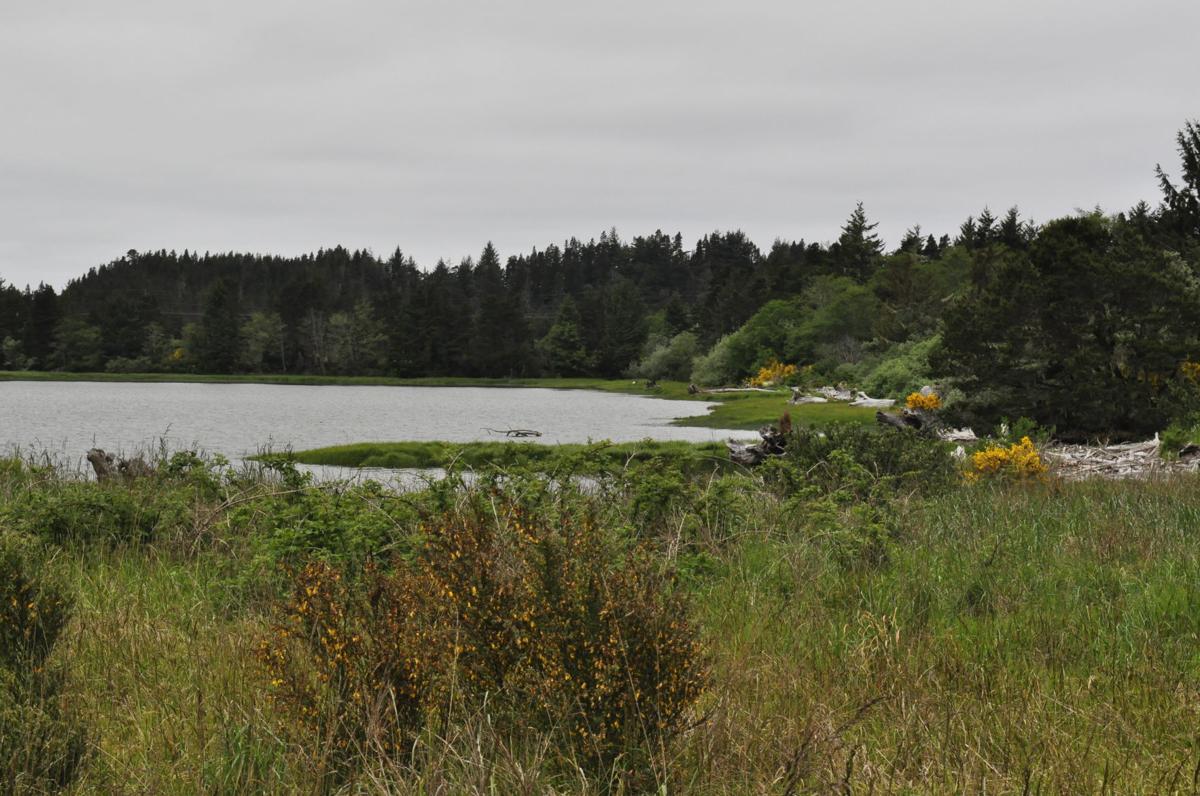 Staff Sergeant Doug Strain talks Thursday about the Combined Services Unit, a contracted security team with the Coos County Sheriff's Department that will work with Jordan Cove if the LNG project gets a green light.

An aerial view of the land on the North Spit of Coos Bay, taken Sept. 20, where the proposed Jordan Cove LNG export terminal would be.

A man walks past 201 Central Ave., Coos Bay, when contractors were preparing the space for the offices of Jordan Cove LNG in 2018.

A look from outside of Coos Bay at Jordan Cove, where Canadian energy company Pembina plans to build its LNG export terminal.

From a law enforcement’s point of view, waiting to know whether or not Jordan Cove will get a green light for its project isn’t an option. They have to start preparing now.

For Staff Sergeant Doug Strain, he is planning for it to become a reality because that is his job. He is in charge of the Combined Services Unit, a contracted security team for Jordan Cove through the Coos County Sheriff’s Office. He and 21 other deputies will keep tanker ships safe as they go in and out of the bay with liquefied natural gas.

Though the unit formed two years ago, Strain and other local emergency services personnel throughout Coos County have been undergoing training and education to prepare for an LNG terminal in the bay. In fact, Jordan Cove has been providing that training for years.

“Because this has been drawn out for so long, people say, ‘Call me when it comes,’” Strain said about the prospect of Jordan Cove building a local LNG terminal. “But the community should be aware of what their emergency responders have done and what they know.”

In 2009, local fire chiefs at the time and other emergency personnel viewed an LNG fire demonstration at Texas A&M.

“They are seeing this demonstration of what happens when you have an LNG fire,” Strain said as he showed The World video of the scenario.

Near the small crowd in attendance stood near a 2,000 gallon LNG pool dug into the dirt.

“LNG is minus 260 degrees,” Strain said. “In order to get it heated enough to get it to vaporize, they are spraying water on it. They want to set this on fire and only the vapor will do that, not the liquid.”

CCSO Captain Gabriel Fabrizio explained that LNG is not flammable at minus 260 degrees while it is in the tanks.

“It has to vaporize first,” he said.

In the video, a fireman walked through the edge of the vapor cloud with a 10-foot pole. At the end of that pole was a flare as he tried to set it on fire.

“He is waving that flare in the vapor to find the right density,” Strain said. “Your density of natural gas has to be between five and fifteen percent in the atmosphere for it to ignite. He is looking for a spot of the right density. If that was gasoline, it is a whole different animal.”

When the vapor finally caught fire, it went out a few seconds later. To get it going again, the fireman returned with the flare.

To put it out, the pit was surrounded by large fans that blew out Aqueous Film Foaming Foam (AFFF), which is a common fire suppressant.

“You put this foam over the fuel source, it denies oxygen to the fire and puts it out,” Strain said. “It’s not easy to get one started even with a lit flare, though.”

On top of the demonstration, Strain and others went out to the eastern seaboard to view other LNG terminals, paid for by Jordan Cove. Strain traveled to Maryland and the Gulf Coast.

“Initially when LNG came to town, I was not in favor of the project,” he said. “It was a major change to what our bay is used to, but after doing research and seeing safety measures, the footprint they have, I’m a lot less concerned.”

In fact, he recognized that there is an LNG terminal in Japan that was impacted by the 2011 earthquake. The 9.0 quake closed the terminal for six months due to flooding, but not damage.

“It flooded the control room,” Strain said. “Electronics and salt water don’t do well and it fried everything. Fukishima was impacted by the shaking, but did you hear about LNG in the news? There’s a lot of little information people need to know for the safety of the community.”

When Jordan Cove first began talking about opening an LNG terminal, which is still moving through the permit process now, it was going to hire private security to work in conjunction with the U.S. Coast Guard.

“But from the Coos County Sheriff’s Office’s perspective, why contract to do safety and security around the terminal with an outside source when you can have deputies who work here every day?” Strain said. “That was a big driver of the CSU.”

The biggest push behind the CSU was the 2005 Energy Policy Act moved forward by congress. Before it was enacted, LNG terminals could open up a location and it was anyone’s guess as to who bore the burden of cost.

In Boston, there is an LNG terminal downtown and has been in operation for over 50 years. According to Strain, one of the biggest challenges they found was not the terminal itself, but security surrounding the shipping.

Ideally it would be the U.S. Coast Guard, but after 9/11 it found itself in more of a security role than ever before.

To take the burden off an over-extended Coast Guard, the 2005 energy policy made the terminal responsible for the product since it controlled who traveled to its port of call.

“It could add additional cost to the product and build cost revenue streams to be delivered to emergency services,” Strain said. “The act specifically talks about safety and security on the water. From that, the other thing is it designed to do is develop a process a terminal applicant has to go through and that includes reaching out to local emergency responders to be part of the conversation.”

If Jordan Cove opens an LNG terminal, the unit will have been outfitted with 21 deputies who would provide extra security to the community first. As for keeping the terminal safe, Strain said they would use “good old-fashioned police work.”

“We have to build our see-something, say-something programs, make citizens a vital part of communication,” he said. “We will build a strong information exchange to make sure our CCSO is deeply ingrained in our community to support the health, happiness and help children grow up to be productive members here rather than moving to Portland or Los Angeles.”

When an LNG tanker leaves the bay, the CSU will escort the vessels in and out. The unit members train by escorting chip ship out of the bay.

“When you have a ship coming in, it takes an hour and a half to get to the jaws of the jetty,” Strain said. “If you have a ma and pop boat out crabbing and remember, I’m from here, if I know who they are, I won’t worry. If I know they aren’t a terrorist or someone wanting to do bad things to this tanker, they can continue what they are doing so long as they aren’t in the shipping channel.”

If he doesn’t recognize the boat and people on board, he will assess the vessel to see if it is low in the water or carrying explosives. If it is an unknown vessel and doesn’t look like a threat, he will put his boat between it and the LNG tanker and encourage it to go by.

“Once the ship is past, I will look for the next potential problem,” he said. “So long as they comply, they will see me for 40 to 50 seconds as we go by.”

Since forming the CSU, Strain said the unit has cost nearly $2 million by 2019 for equipment and training. If the terminal becomes fully operational, the unit will cost Jordan Cove $6 million to $8 million a year.

“Jordan Cove pays for this because they are the ones causing it to come about, which is the language in the 2005 policy act,” Strain said.

Since 2006, the county’s Emergency Response Planning group has made a point to meet on a quarterly or triannual basis to build out safety procedures and processes surrounding Jordan Cove.

“This tsunami zone issue, I’m not concerned,” Strain said. “I’m concerned about our community as a whole because I’m not sure the city is ready to take on 2,500 workers, but this project is going to be the safest place to be in the county because of the structure they are planning on doing.”

One of the pieces of infrastructure being built, if the project obtains its permits, is a north county substation that is being called the SORSC Building. The Southwestern Oregon Regional Safety Center will be equipped with a 911 center and serve as a backup office for the CCSO.

“Its technological capability will be state-of-the-art and built to withstand current tsunami and earthquake information,” Strain said. “Nothing in the county has been built to that standard except the Coos Bay Fire Station.”

The CCSO and CSU is concerned about protesters prior to the terminal being opened, if it opens, and hopes to quell any longstanding protests before they start.

“One day it may come and when it does, it will have a huge impact,” he said. “If groups want to hear us talk and explain what we’ve done and plan to do, we will come out and talk. We want to make sure we’re hearing our community’s concerns. We want to educate and want them to know what I know about this project to alleviate those concerns.”

“It was a 60/40 difference,” Strain said. “Coos County as a whole does not oppose this project. Based on those ballots and support of this project, it’s a good possibility that this will happen and we have to do our part to make it safe because we recognize the significant impact it would have on this community.”