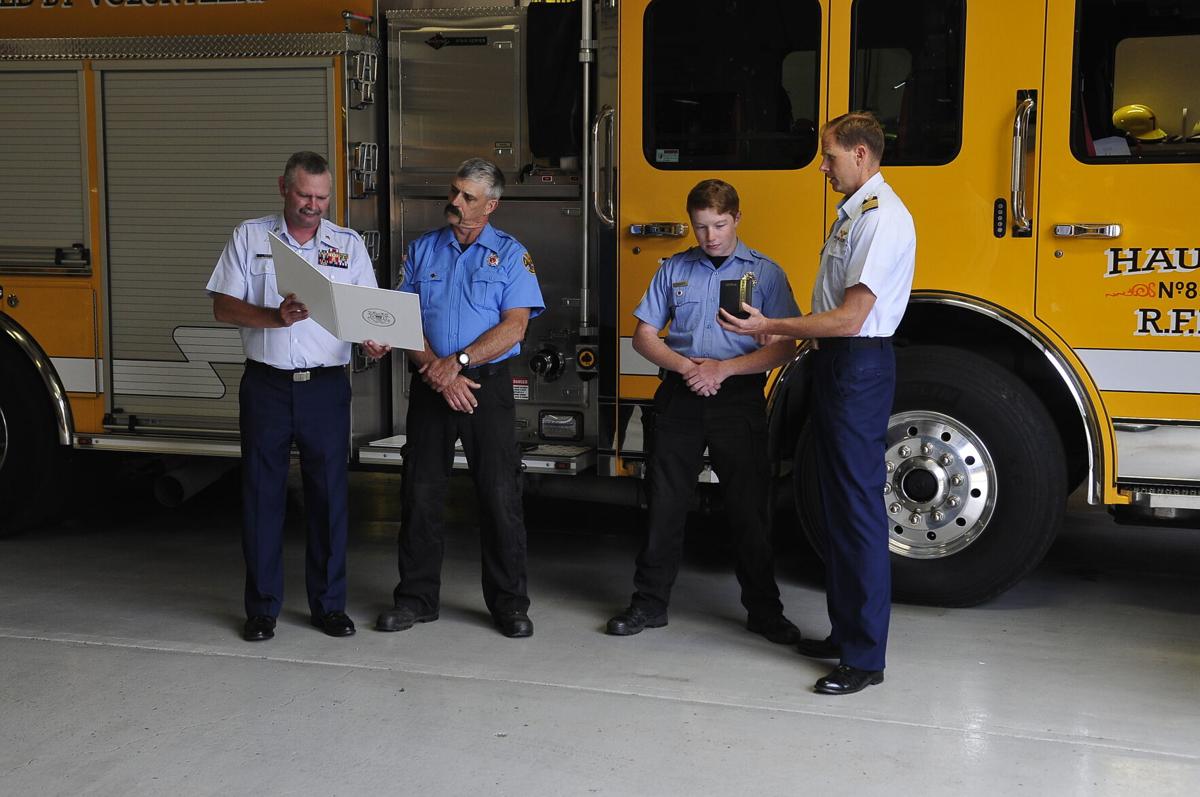 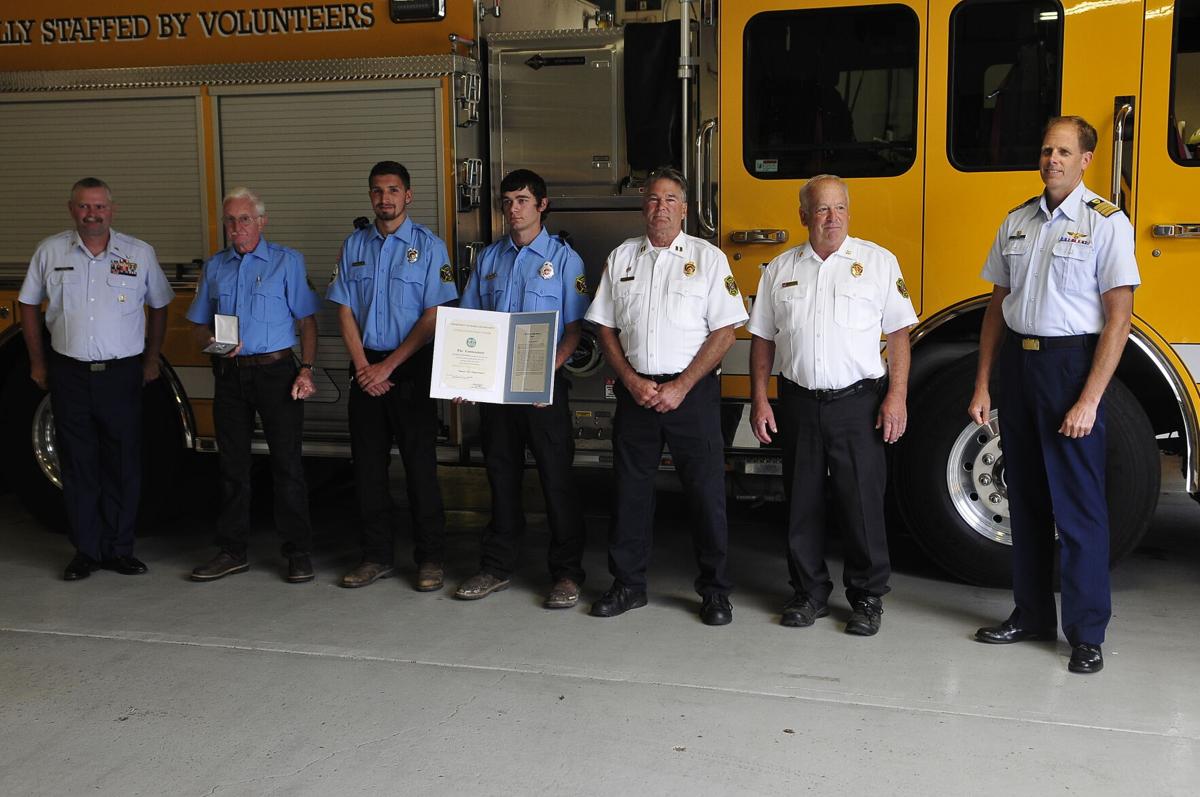 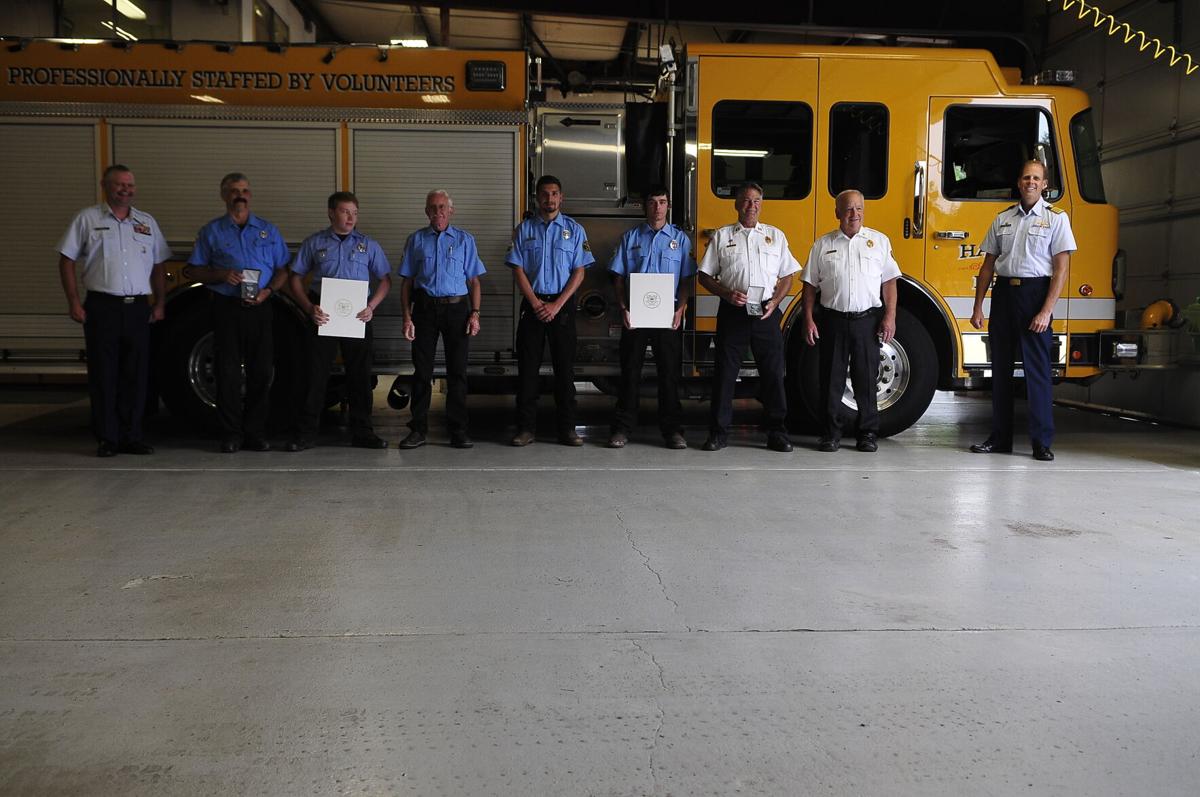 In his nearly two decades with the service, Capt. Olva Saboe had never seen the award given until Thursday, when he had a chance to help present it to firefighters from both the Hauser and North Bay fire departments.

That was fitting because Saboe had a front-row seat to the heroic actions that led to the honors — saving three men from the capsized fishing vessel Pacific Miner early this year.

“It was neat to be a part of that and recognize the rescuers,” Saboe said after the ceremony at the Hauser Fire Department.

Several of the firefighters involved recalled the rescue after both fire departments were presented the Meritorious Public Service Award signed by Rear Admiral A.J. Vogt, commander of the 13th Coast Guard District.

Saboe was in the air in one of the helicopters from the North Bend Air Station when he and his fellow crew members saw the Pacific Miner in trouble near the mouth of the Coos River about 5:30 p.m. on Jan. 14. When they saw the boat capsized they sent out a message and both the Hauser and North Bay fire departments were paged out — something that is not unusual given the proximity of the two districts to each other and the sand dunes.

The firefighters didn’t have particularly high hopes of a rescue, with various members of the departments and the Coos County Sheriff’s Office searching the beach north of the river for any sign of the vessel or its passengers.

Daniel Cook of the North Bay Fires Department said he thought they were on a recovery mission.

“We thought we were looking for bodies to recover,” he said.

But when he and fellow North Bay firefighter Michael Swanson and Nathan Fish of the Hauser Fire Department got to the river’s North Jetty, they decided to walk up the jetty, despite rough waters and dark skies.

“We had every light on we could,” Fish said. “We were looking for anything we could see.”

He said about halfway down they smelled fuel and a little further he spotted the boat upside down against the rocks of the jetty.

They still had little hope until they reached the Pacific Miner and Fish heard the men yelling. Then, he said, everything went calm and everyone on the rescue team heard them yelling. Suddenly, they started trying to determine how to rescue them.

Swanson hurried back to rescue vehicles to get a saw and he and others also brought out ropes to set up a harness system to protect Cook and Fish as they climbed down on the rocks to cut open a hole in the boat and rescue the three men aboard.

“The biggest fear Nate and I had was the waves taking us out into the water or the boat crushing us up against the jetty,” Cook said.

“We were working against the tide.”

The Coast Guard said the waves were breaking at 14 to 16 feet.

Cook said the boat had been destroyed by the waves within two hours of the rescue.

“We got them out,” Cook said. “Everything worked perfectly. There were a lot of people praying. I was praying.”

Amazingly, the fishermen were not injured aside from hypothermia symptoms after being in water up to their armpits for two hours on a night when the outside temperature dipped under 40 degrees.

Rather than being lifted to the helicopter by rescue swimmers, Saboe said the boats captain insisted on walking out on the jetty.

Cook and Fish also got down in the water up to their chests to pull off the rescue, but Fish said he never doubted it was the right action to take.

“Myself wasn’t the concern,” he said. “I knew there was three guys in there who wanted to go home to their families.”

Cook also said both his dad and grandfather were firefighters. That explained his perspective when the awards were presented Thursday.

“I didn’t do it to get rewarded,” he said. “I did it because it was the right thing to do.”

Still, he said, it was nice for the two departments to get recognized.

“It shows how much the community appreciates what happened that night,” Fish said.

Hauser Fire Chief Jerry Wharton said it was just one example of the two fire departments working together.

Wharton, who was on the beach, said he wasn’t sure it was a good idea when the three firefighters started walking down the jetty, given how strong the wave action was.

Sometimes when North Bay and Hauser work together, be it an incident on the dunes or on U.S. Highway 101, they are responding to a fatal accident. So having the January incident turn into a rescue was rewarding for everyone involved, Wharton said.

“You see a complete difference in everybody when it turns out this way,” he said. “It was night-and-day different.

“When we come back from a fatal, it’s very solemn.”

Several people from both agencies helped in the rescue. The official citation from the Coast Guard also recognized Chief Jim Aldrich and Lt. John Aldrich from the North Bay Fire Department, who weren't able to attend Thursday's ceremony, and Wharton and Capt. Lawrence Van Hoof of the Hauser Fire Department. Hauser firefighters Ray Daniels and Nick Borgens also took part in the rescue and Thursday's ceremony.

“Our two agencies, we work good together,” Swanson said. “There was a lot of good communication with the radios.”

Ultimately, the actions saved the lives of the fishermen.

“That was a hell of a job you guys did that night,” Saboe said. “I’m convinced there are three guys alive today because of what you did.”

The official citation each department received Thursday said as much, closing with the line: “Hauser (and North Bay) Fire Department gallantly supported the Coast Guard search and rescue mission. Their actions are most heartily commended and are in keeping with the highest traditions of public service.”