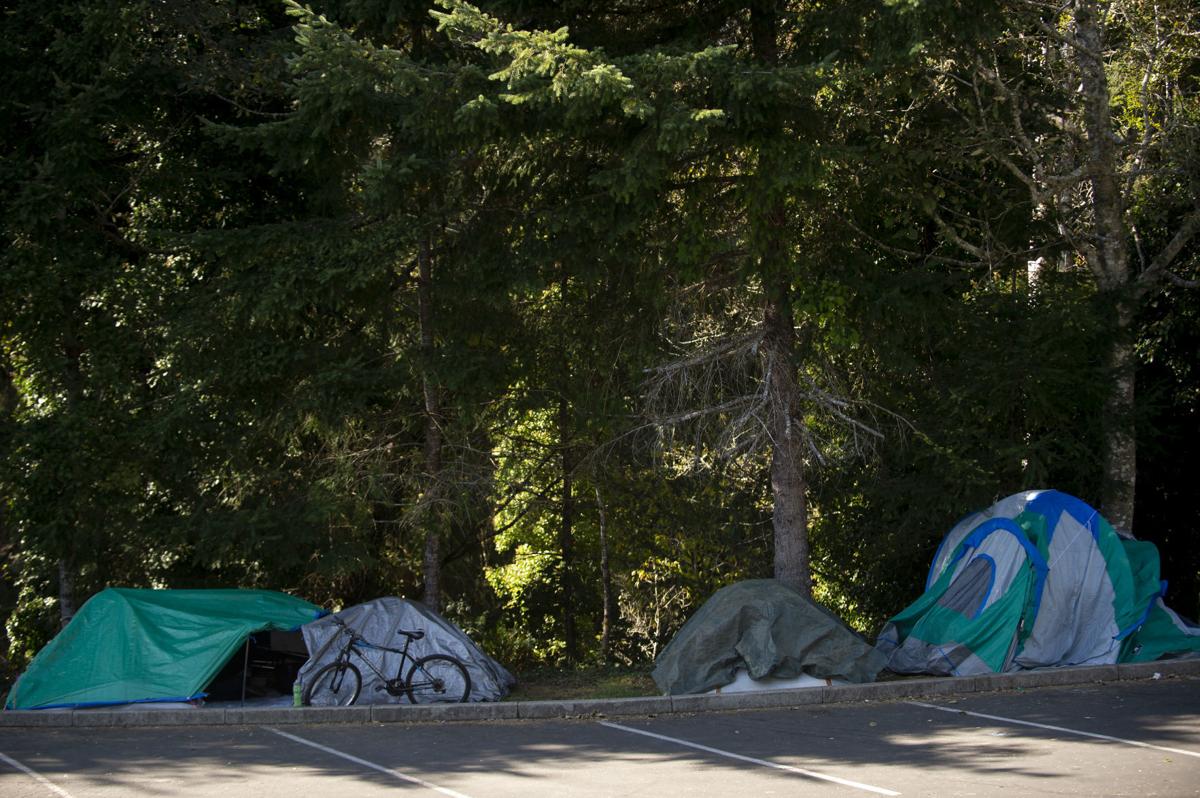 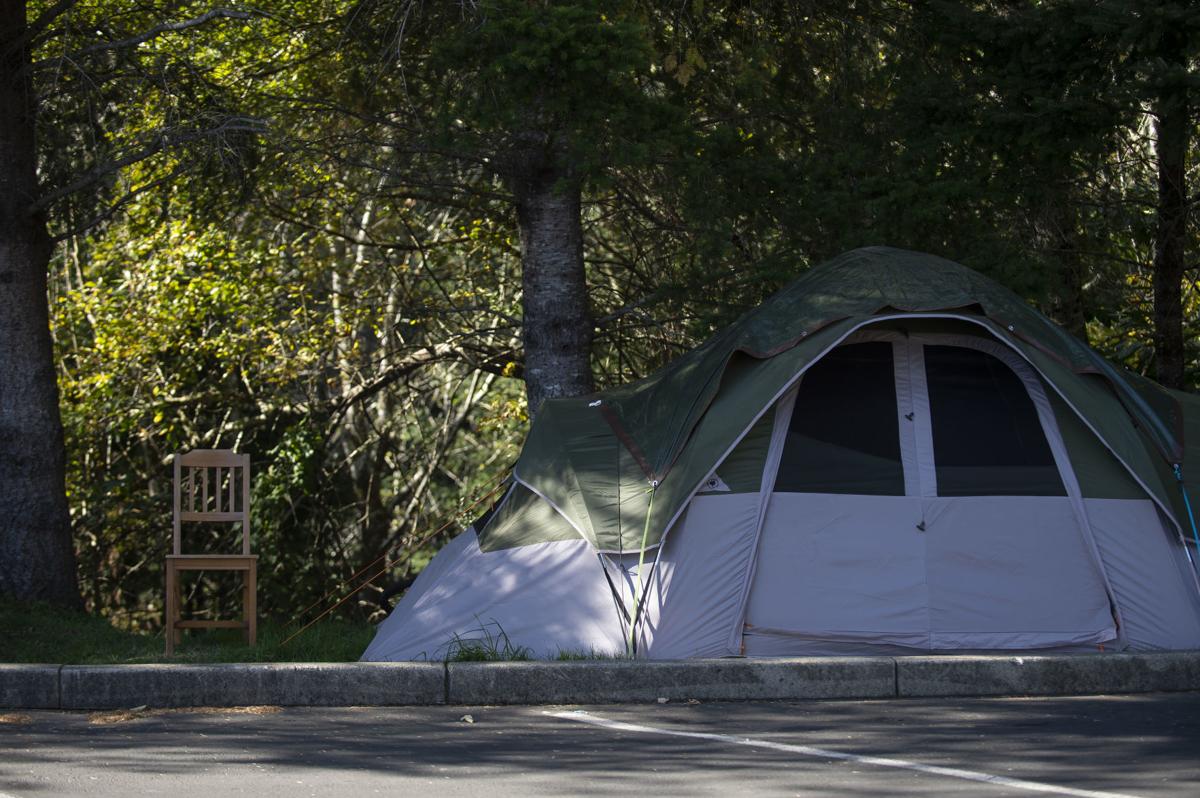 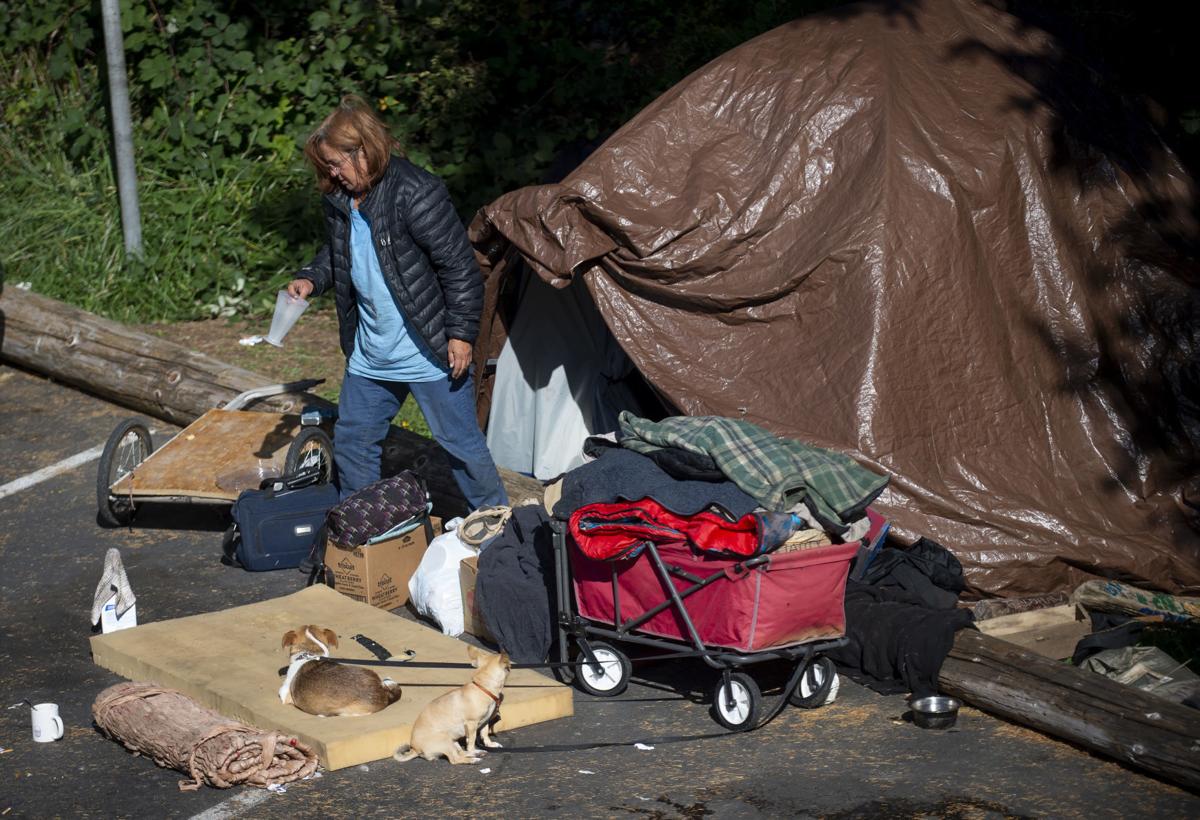 Grace Ramey works around her tent outside of the Harmony United Methodist Church in Coos Bay. Ramey is one of a few dozen homeless people camped out in the church parking lot. 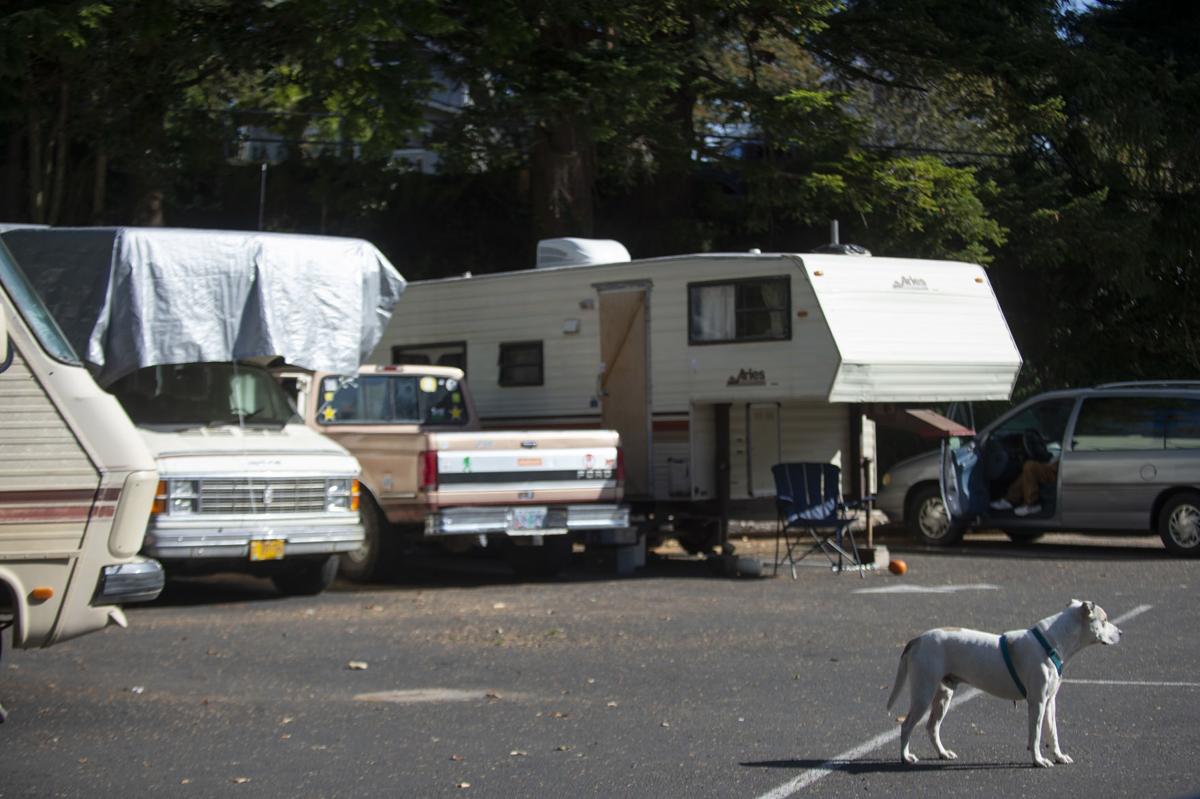 A dog looks around in a temporary homeless camp outside of the Harmony United Methodist Church in Coos Bay.

COOS BAY — As the parking lot homeless camp at Harmony United Methodist Church fluctuates in size on a daily basis, the City of Coos Bay sees it less as a code violation and more as a humanitarian problem.

“We realize there are more folks there than the ordinance allows, but at least we have someone who stepped up,” said Carolyn Johnson, community development administrator for Coos Bay.

Johnson is referring to the city’s temporary lodging facilities code, specifically the authorization process and permitting for temporary outdoor lodging. Under Section B, it reads that a permitted location allows a maximum of five recreational vehicles, automobiles or trucks. However, more can be authorized by the city police chief and fire chief, the code says.

According to Pastor Donald Ford for Harmony United Methodist Church, as of Nov. 25, there were 27 family units and a total of 39 people at the camp. That count is less than the 52 it previously had at the beginning of the month.

“Some have moved on,” Ford said. “We have tried to motivate people to seek housing elsewhere, while some have chosen to leave the area. Some have sought and obtained places to live in Coos County. It is a fluid population.”

From where Johnson sits, the church homeless camp is a problem that should be solved without having people kicked out.

“There is a compassion issue here that we have to think about,” she said. “The city is aware and we’re down there with our officers and city manager. The city is trying to work as expeditiously as we can with partner agencies to update our codes and come up with solutions, but the city is not in the business of building housing. That’s not our mission. But we recognize this is a problem in the community and want to help.”

The creation of the temporary lodging facilities code started a year and a half ago when the city first looked at the homeless issue. A homeless taskforce was created to tackle the complexities of the problem, comprising a variety of public service groups that work with the city to develop a means where the homeless issue can be addressed.

“We want to accommodate churches or other nonprofits who want to temporarily house folks without shelter,” Johnson said. “(The code) is meant to be a transitional move on the city’s part with the idea that services would be interested in stepping up and helping out. Only one church has done that and they have struggled because there are more people who need a place to stay than what is authorized in the code.”

Grace Ramey works around her tent outside of the Harmony United Methodist Church in Coos Bay. Ramey is one of a few dozen homeless people camp…

Johnson credited The World newspaper’s previous coverage on the homeless issue for providing information on the problem. She gleaned data from those stories as the city formed the homeless workgroup and created the temporary lodging facility ordinance, she said.

“The goal was to make the ordinance as streamlined as possible so it would be easy for people to get through the permitting process,” she said.

However, since the church camp formed almost seven months ago, Coos Bay City Manager Rodger Craddock has been aware of some complaints from community members.

“If you weigh what we’ve received against other complaints and concerns made when homeless are camping in vehicles, in a neighborhood, it’s far less,” Craddock said.

Craddock pointed out that no matter what is done to help homeless individuals, “you will always run into ‘Not my backyard,’” or arguments made by people who think the city or organizations should resolve the situation “so long as it’s not in their backyard,” he said.

“Others believe nothing should be done because ‘it enables people to live in this lifestyle,’” Craddock said. “I don’t think it’s as simple as either one. But what I do know, while Pastor Don and the church have put in an application to meet the ordinance, the homeless workgroup is evaluating the (code) to see if the ordinance needs to modified.”

But updating the codes is ultimately up to the City Council. Right now, Johnson is work with the homeless workgroup to discuss what should be recommended. They will meet again next week and hopefully come up with that recommendation in that time. From there, it will go on to the City Council’s next available work session for discussion.

A dog looks around in a temporary homeless camp outside of the Harmony United Methodist Church in Coos Bay.

“It wouldn’t go onto a work session until early next year because we only have one work session in December because of the holidays,” Craddock said.

In the meantime, Craddock highlighted the fact that where the camp is now allows homeless individuals a place to use sanitary facilities and throw away garbage.

“Pastor Don seems to run a tight ship,” he said. “Though there are a few police calls up there, even the police agree we’d have those and far more if (the homeless) were elsewhere. At least they aren’t committing crimes like offensive littering and trespassing on people’s property.”

In regards to the pastor “running a tight ship,” Ford told The World that since the camp formed he has worked closely with the Coos County Community Corrections department to find out if anyone is on probation with a violent criminal history or is a sex abuser.

“If we find out those people are in the camp, I ask them to leave,” he said.

Since The World first ran a story on the church camp earlier in November, Ford said a number of people and organizations have reached out to help “the campers.”

“We call them ‘the campers’ because that’s the easiest and nicest word we can say to address what’s happening rather than ‘those people’ or ‘homeless people,’” Ford said.

Of the community members who have stepped forward to help, donations have included hygiene kits, food, clothing and also money to help the church offset the costs of having the camp. There have also been people step forward to help support veterans living in the camp, as well as camper’s pets.

Ford has also continued working with Oregon Coast Community Action in helping the campers “graduate” from the parking lot into more stable housing.

“I’d like to see more agencies that have some kind of permanent housing for these people to move into,” Ford said. “Finding them housing is a difficult task and there’s a number of Section 8 vouchers sitting unused because of the lack of affordable housing. As in most places, it is just a hard situation for homeless individuals making $1,000 to $2,000 a month to find permanent housing.”

Ford said he’d also like to see more faith-based organizations reach out and do what Harmony United Methodist Church has done.

“If churches who aren’t near or do not have child care during the week, I’d like to see three to five parking spots dedicated for people to come in and seek temporary overnight shelter,” he said. “Campers don’t have to stay there all day, since most have places to go anyway to find food.”

Craddock echoed that, saying that it has to be nonprofits, faith-based organizations or individuals who help address these issues.

“Hopefully we can find a resolution and when I say ‘we’ I have to remind everyone that the city doesn’t run social services,” Craddock said. “What we have at the church is a temporary solution, but it is not long term. How do we get them from homelessness to being housed and sheltered? … It is an interesting and complicated situation. I wish there were easy answers, but there doesn’t appear to be.”