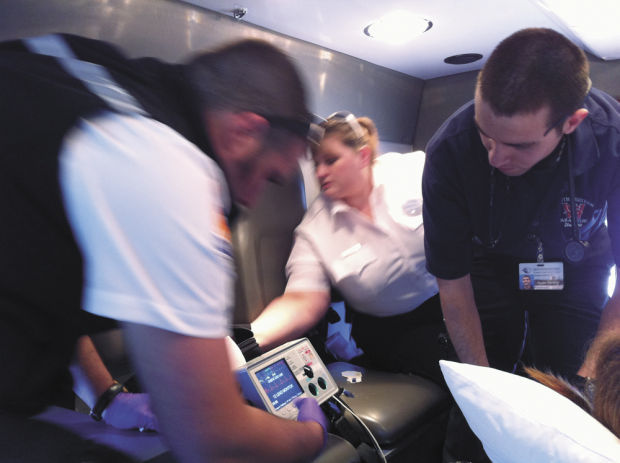 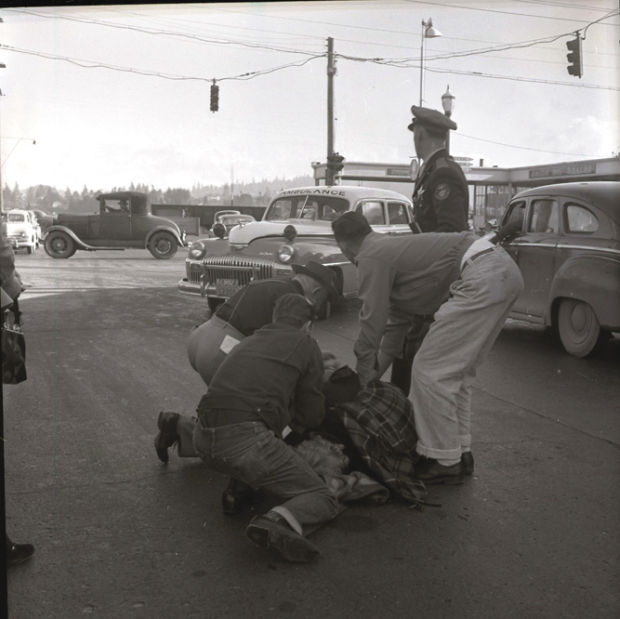 Ambulance personnel work on a patient in downtown Coos Bay in this undated photo from the 1950s.

Ambulance personnel work on a patient in downtown Coos Bay in this undated photo from the 1950s.

In Coos County, until the 1960s, victims of accidents or illness rode to the hospital in vehicles adapted from hearses and staffed by mortuary employees.

In fact, J.D. Fuiten, owner of Bay Cities Ambulance, recalls learning in his 1980 college textbook that half the ambulance services in the United States were operated by morticians.

In Coos Bay and North Bend, ambulance service was provided by Campbell-Watkins Funeral Home and then Coos Bay Chapel till 1966, when the business became Bay Cities Ambulance.

Bay Cities Ambulance serves western Coos County in an area bounded to the north by Spinreel Park, on the south by the Curry County line, and on the east by the Greenacres area. Its territory also includes parts of Elliott State Forest and the Oregon Dunes National Recreation Area.

The company has more than 100 employees based in Coos Bay, Bandon and Roseburg.

All the agencies collaborate when necessary to provide advanced services or drive patients long distances.

Often, a patient gets initial treatment from the EMTs of a rural fire department, who might then hand off the patient to Bay Cities Ambulance for advanced life support on the way to the hospital.

Bay Cities Ambulance might then take the patient as far as Portland in some cases.

An agreement with Coos County gives it a monopoly on ambulance services in its territory for those areas not served by a fire department or hospital ambulance service. In return, BCA trains EMTs for nine different first response agencies, provides a physician advisor, restocks their supplies and teaches CPR classes in the community. The company must meet standards of service, including how quickly it responds to calls in various parts of the county.

Although ambulance technology is constantly changing, the biggest change coming down the pike is the Affordable Care Act, Fuiten said.

“Over 50 percent of what we do is either charity care or contractual discounts with Medicaid and Medicare,” Fuiten said.

He didn’t venture a prediction of how ambulance service might change under the ACA. “We don’t know what it will look like.”