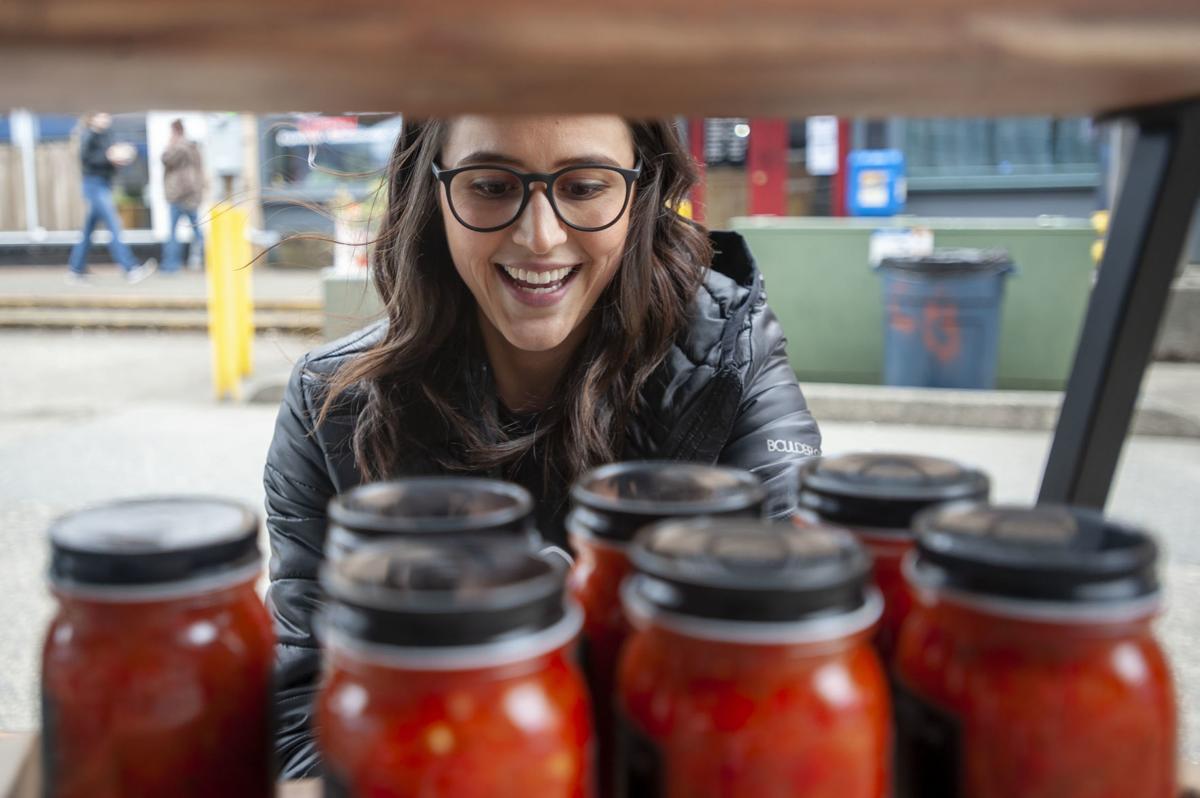 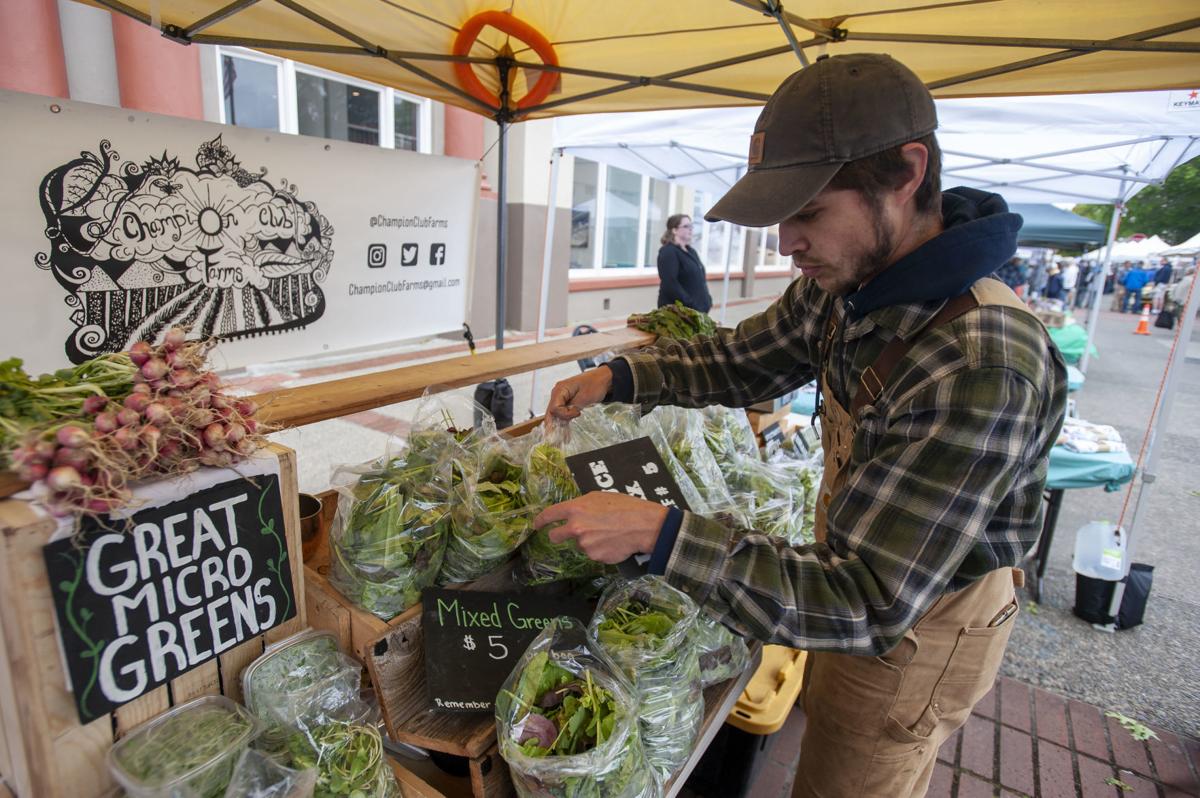 Rylan Guillen straightens bags of greens at the Champion Club Farms booth Wednesday during the Coos Bay Farmers Market in downtown Coos Bay. The Umpqua farm is one of several new vendors bringing goods to the market this year. 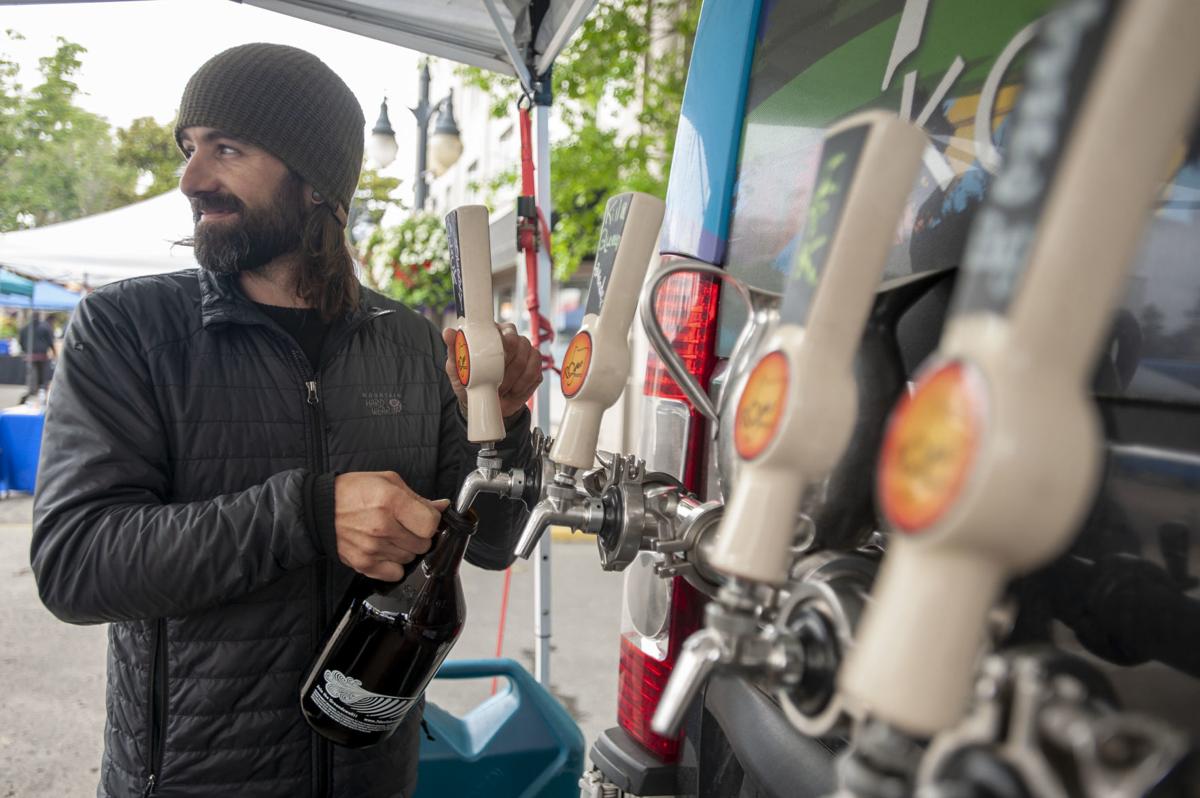 Chris Leach fills a bottle of Rogue Kombucha Wednesday during the Coos Bay Farmers Market in downtown Coos Bay. The Grants Pass base business is one of several new vendors bring goods to the market this year. 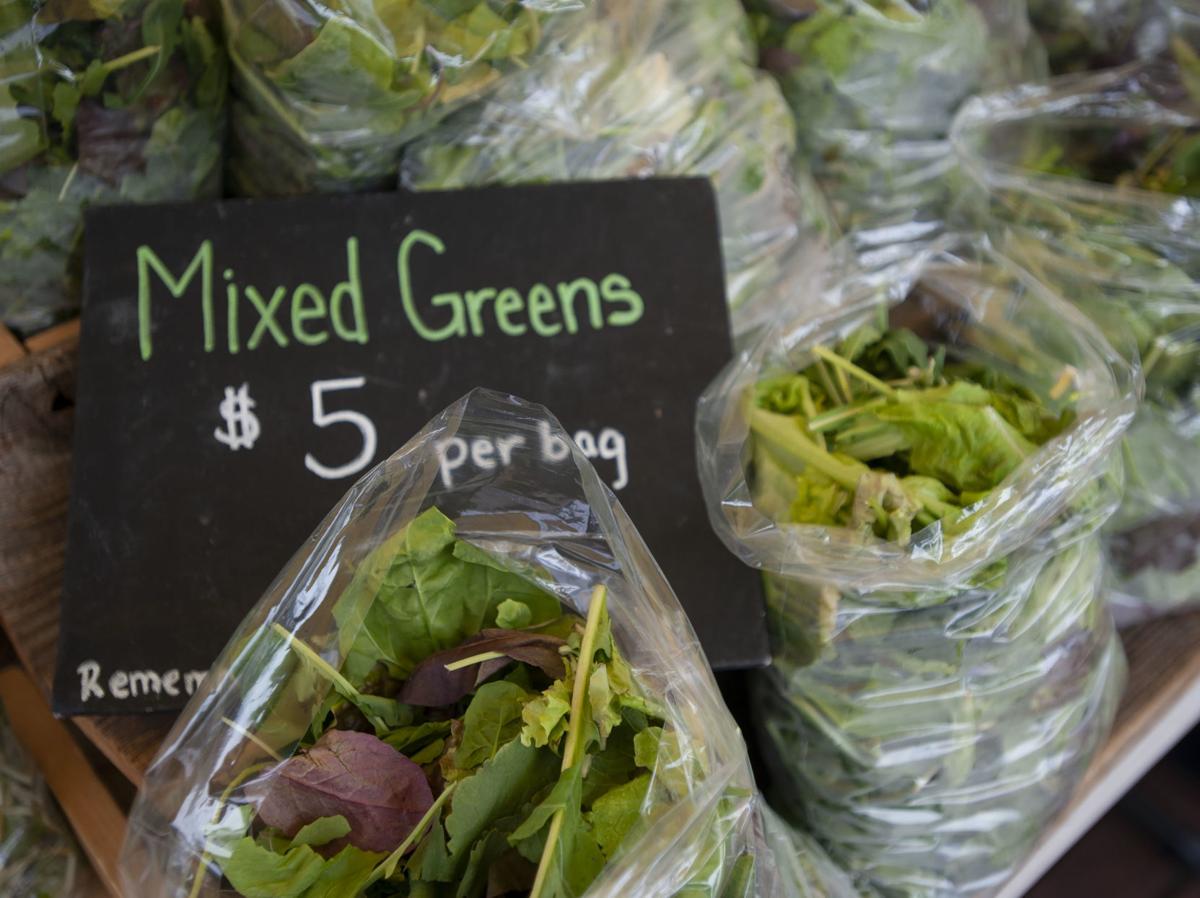 Bags of greens at the Champion Club Farms booth Wednesday during the Coos Bay Farmers Market in downtown Coos Bay.

COOS BAY — As the 19th season of the Downtown Coos Bay Farmers Market continues along, frequent visitors to the annual market may have noticed a few new faces.

This year, more than 30 new vendors have entered the lineup for the very first time and have brought with them their own unique, handcrafted products.

Among the new vendors include Rogue Kombucha, a family-owned and operated Kombucha company based out of Grants Pass. According to owner and brand ambassador Chris Leach, the company uses non-GMO and organic ingredients in all of its drinks.

“People have been pretty excited about our herbal blends and fruit infusions,” said Leach. “Each month we feature a new specialty drink and this month we have a lavender lemonade called ‘KillaQueen,’ which is really good.”

With a focus on being environmentally conscious, the company recently ended its bottle line and now offers its products via tap. The “Kombucharator Tap Wagon,” the company’s kombucha dispensing vehicle, now makes it possible for visitors to grab their drinks either using their own containers or purchasing a reusable mason jar or growler at its booth.

“Our hope as a company is just to reduce our environmental impact to zero,” said Leach. “This is one of the steps we’re taking toward accomplishing that.”

Another first-time vendor to the market is Champion Club Farms. The farm, which is located in Umpqua, offers customers direct, fresh farm-to-table microgreens and mixed lettuces.

Rylan Guillen, who co-runs the farm with his wife, Erika, said he had been gardening as a hobby for almost five years before he decided to open their business. Sunflower, cabbage, broccoli and radishes are among some of the microgreens the farm features.

“The most rewarding aspect of being a part of the farmers market is getting to connect with our customers,” said Guillen. “It’s a nice trade off because it allows us to make a living out of this and it gives customers a high quality, healthy product.”

For those unable to attend the market, Guillen said the farm recently began distributing its mixed greens at the Coos Head Food Co-op for those looking to purchase its produce.

Abby Kippen, of Top Your Nosh, has also made her first appearance as a vendor to the 2019 Coos Bay Farmers Market. The Bandon-based company sells its handcrafted relish, which has been shared in their family for over 20 years.

“My mom started making these relishes back in the ‘90s,” said Kippen. “About four years ago, we decided to start this thing back up and get it back out there.”

Kippen, who runs the company with her husband Ben, now sells a jalapeno and red pepper based relish, which can now be found at The Beverage Barn in Bandon and Walt’s Pourhouse in Coos Bay.

The relishes vary in spice levels, but are filled with lots of flavor, Kippen said. While still expanding, Kippen said they are looking to increase its inventory and introduce new relishes later this year.

“Our next item is going to be a corn relish,” she said. “We can’t wait to expand our product and share with folks the relishes we’ve cherished as a family for as long as I can remember.”

The Coos Bay Farmers Market runs Wednesdays through October 30 from 9 a.m. to 2 p.m. For more information on vendors or the market itself, visit its Facebook page at https://www.facebook.com/CoosBayFarmersMarket/.

Chamber Minute: Join the team today for a better tomorrow