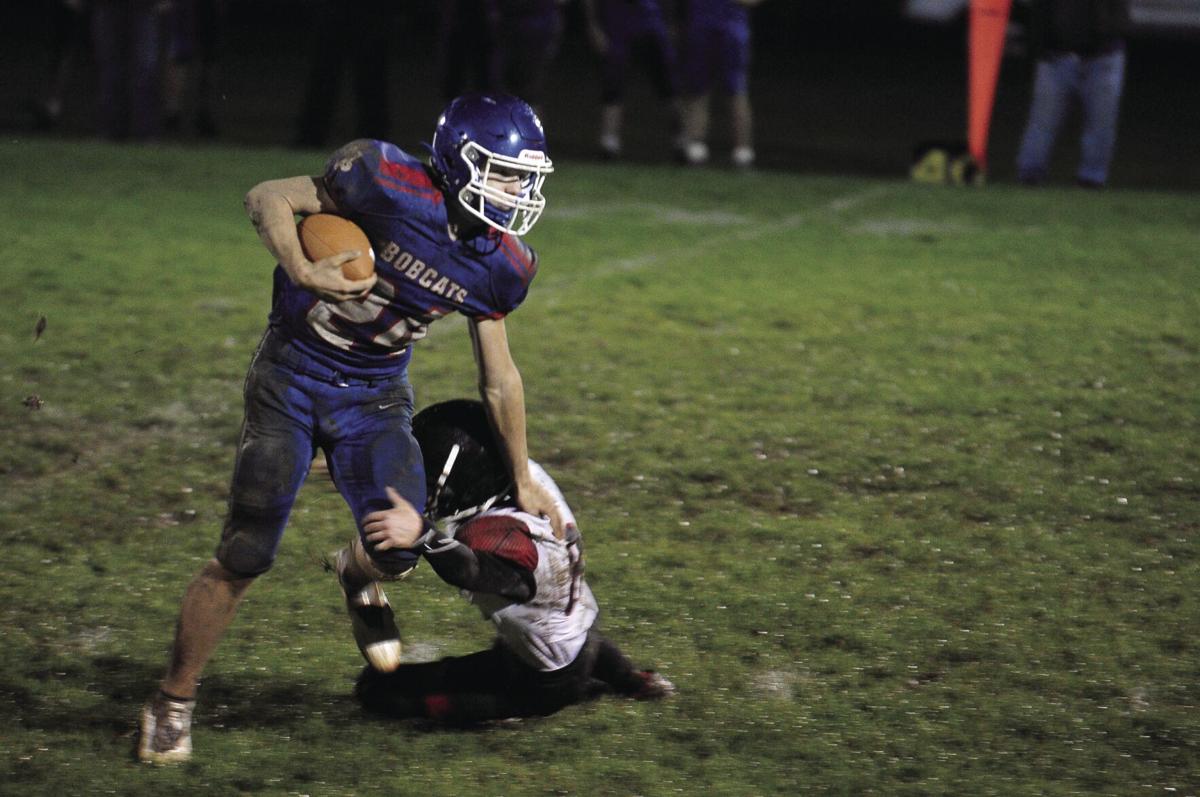 Myrtle Point’s Billy Reynolds breaks free for a long touchdown run in the fourth quarter against Enterprise on Friday night. The Bobcats beat the Outlaws in the first round of the eight-man playoffs. 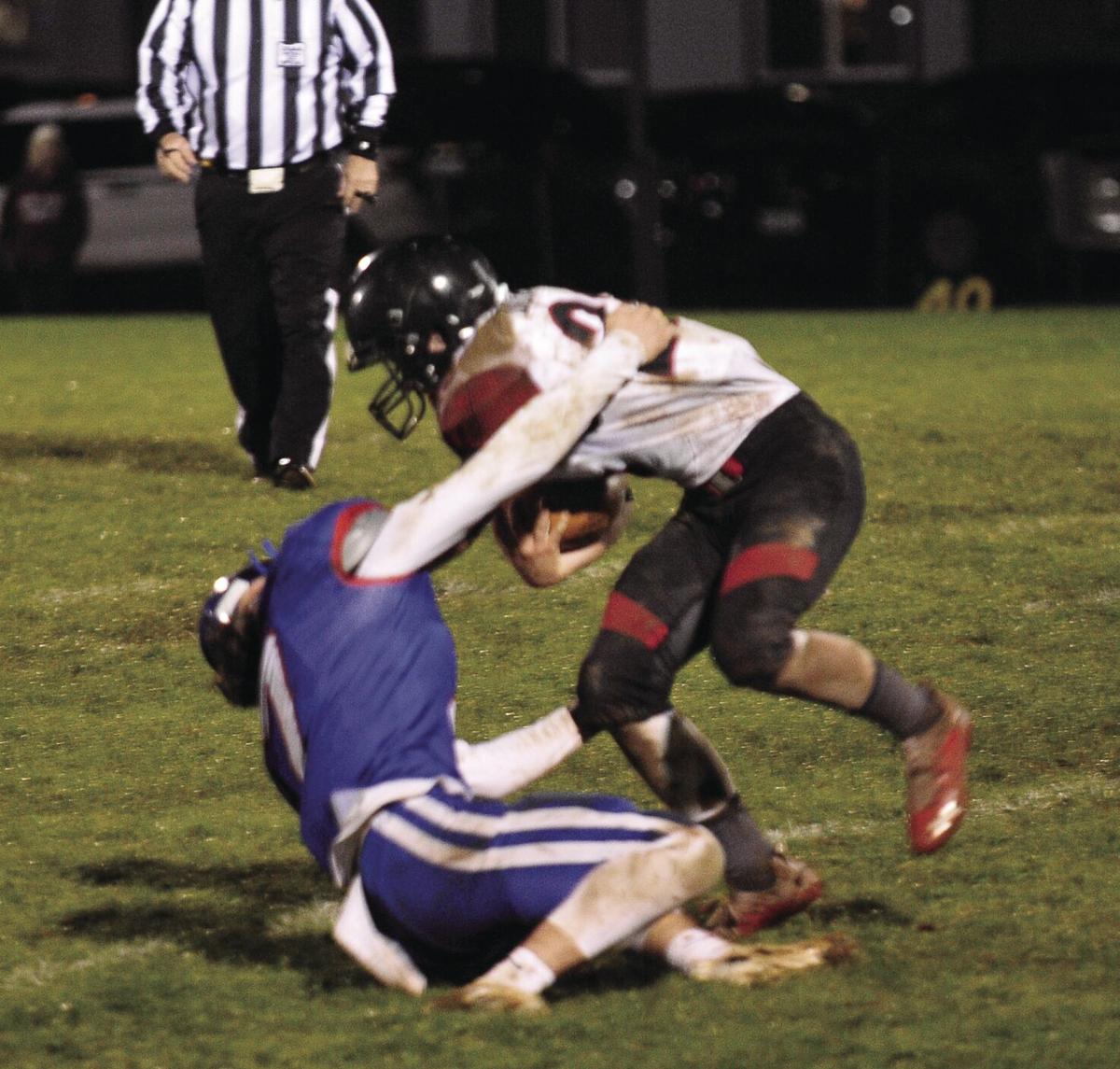 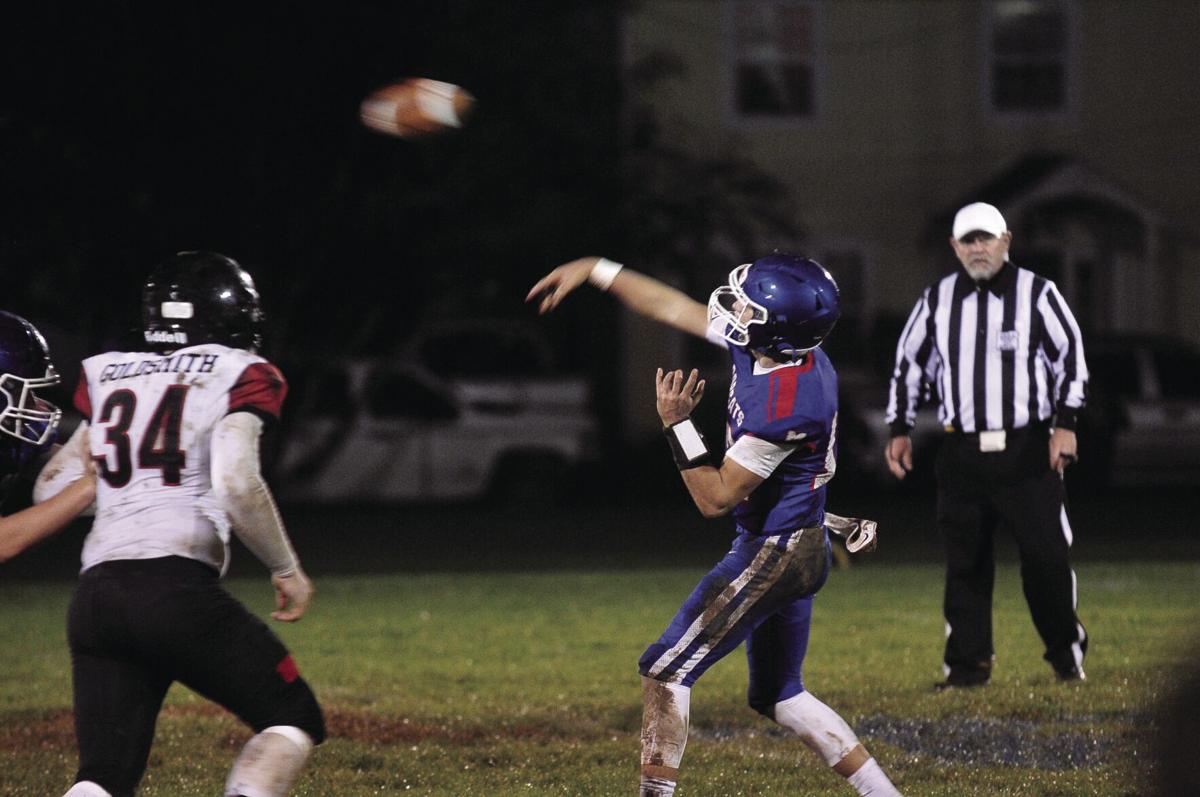 Myrtle Point’s Billy Reynolds breaks free for a long touchdown run in the fourth quarter against Enterprise on Friday night. The Bobcats beat the Outlaws in the first round of the eight-man playoffs.

MYRTLE POINT — The last time Myrtle Point won a football playoff game, most of the current players were toddlers. They weren’t even alive the last time the Bobcats played in the playoffs on their own field.

The Bobcats made the most of their first home contest since 2003 Friday, beating Enterprise 42-6 to advance to the Class 1A eight-man quarterfinals.

Still, he said, “I don’t think we played to our full potential.”

The Bobcats got off to a relatively slow start, at least on offense, and led 16-6 at halftime. But they pulled away to advance to the quarterfinals, and a road game Friday night against No. 2 seed Powder Valley, which beat Perrydale 70-34.

“It feels great,” said junior receiver Andreas Villanueva, who had a big game on offense and defense in the win. “It’s the first time in a long time. That’s big for us.”

Myrtle Point’s last playoff win was in 2006, when the Bobcats topped Rainier 12-0 before losing to Nyssa 27-13 in a “home” game played at Marshfield High School. Their last actual home game in Myrtle Point was in 2003, when they beat Dayton 32-18 on the way to reaching the state semifinals.

They gave a good home crowd a lot to cheer about Friday.

While it took a while for Myrtle Point’s offense to get going, the defense came up with stop after stop, especially when the Bobcats started recognizing the counter play that was the most effective weapon for Enterprise.

After Myrtle Point’s first drive fizzled out and the Bobcats got a fourth-down stop by inches, they hit the first of a number of big plays to take the lead for good. Backman connected with Villanueva on the sideline for a short pass and he broke a couple of tackles and crossed diagonally to the other side of the field on the way to an 80-yard catch-and-run touchdown. Billy Reynolds bulled through the line for the extra point and Myrtle Point led 8-0 just over midway through the first quarter.

Enterprise answered with its own touchdown, a long drive culminating in a 4-yard run by Gideon Gray with 50 seconds to go in the first. The Bobcats blocked the extra point and Enterprise never found the end zone again.

The Outlaws recovered an onside kick after their touchdown, but Myrtle Point stopped the drive inside its own 20, starting a series of defensive stops.

“Our line was getting to the ball and we were group tackling,” Villanueva said.

Enterprise had a few big plays on offense, but the Myrtle Point defense had more of them.

Villanueva recovered one fumble when the ball was ripped out of the hands of an Enterprise receiver after a catch and dove on top of a muffed punt for another takeaway. Later in the game, he intercepted a pass.

He described turnovers as “very good — especially in a playoff game.”

Myrtle Point added one touchdown in the second quarter, when Backman completed a screen pass to tight end Howard Blanton, who rambled 35 yards for the score. Reynolds added another conversion run and the Bobcats led 16-6 at the break.

Neither team scored in the third quarter, but Backman and Blanton connected for another TD on the first play of the fourth quarter, covering 43 yards, and then hit Villanueva with a pass in the back corner of the end zone from 9 yards out on Myrtle Point’s next possession.

Myrtle Point’s running attack, which had been largely slowed by Enterprise, finally broke two big plays for the final two scores — a 49-yard run by Reynolds and a 25-yard dash by Troy Warner.

“The fourth quarter was the best we played,” Backman said, referring to Myrtle Point’s offense.

Miller said Enterprise focused on stopping Myrtle Point’s running attack, which was fine with him.

“Our pass game is our bread and butter,” Miller said. “We have two great receivers (Villanueva and Jacob Koser) and a great tight end.”

He added that Reynolds and Warner give the Bobcats two great running backs as well.

It was the defense that really got the coach excited, though.

“Jacob Koser played his best game on defense,” Miller said. “He and Billy (Reynolds) did a great job at linebacker.”

Villanueva had another great game in the defensive backfield, he added. And defensive linemen Logan Clayburn and Dylan Jones made a number of big plays to stop Enterprise runs.

The result was a breakthrough playoff win for a team with just one senior — Daniel Tolman.