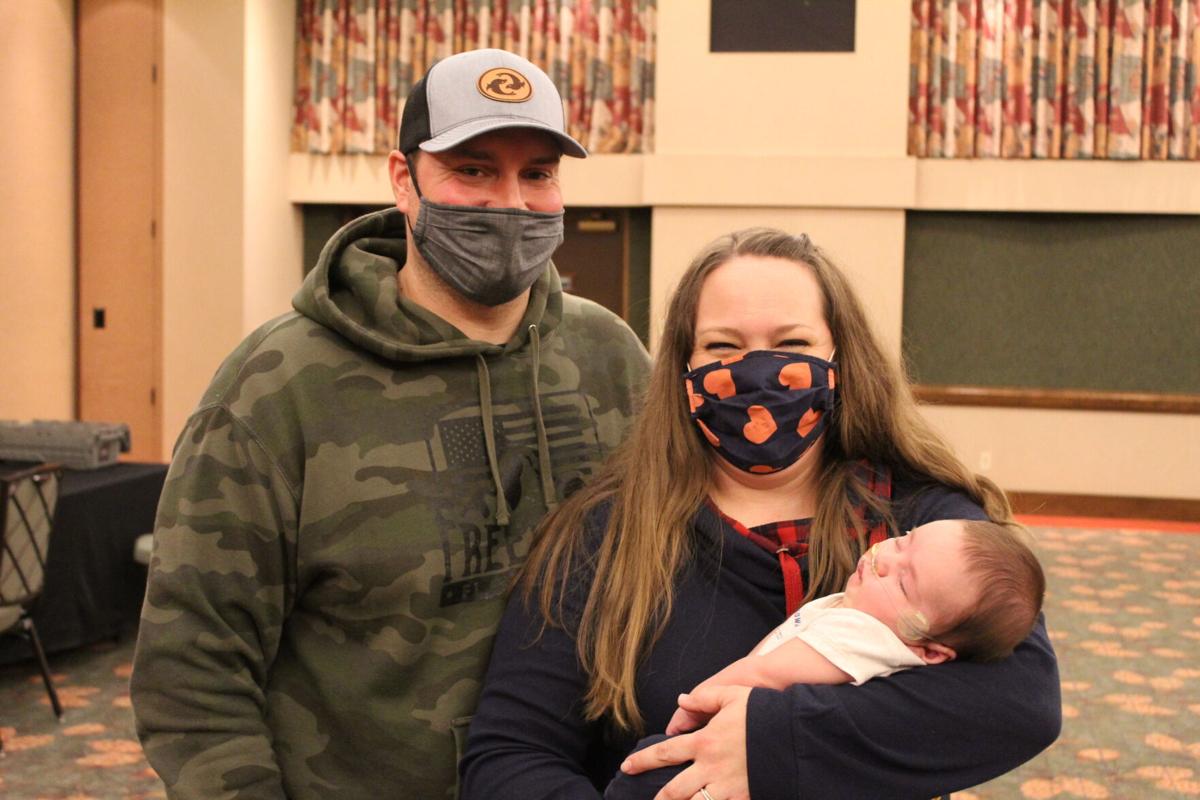 Michael, left, and Jenna Breuer are glad to have newborn Grady back at home with them after months in the hospital. 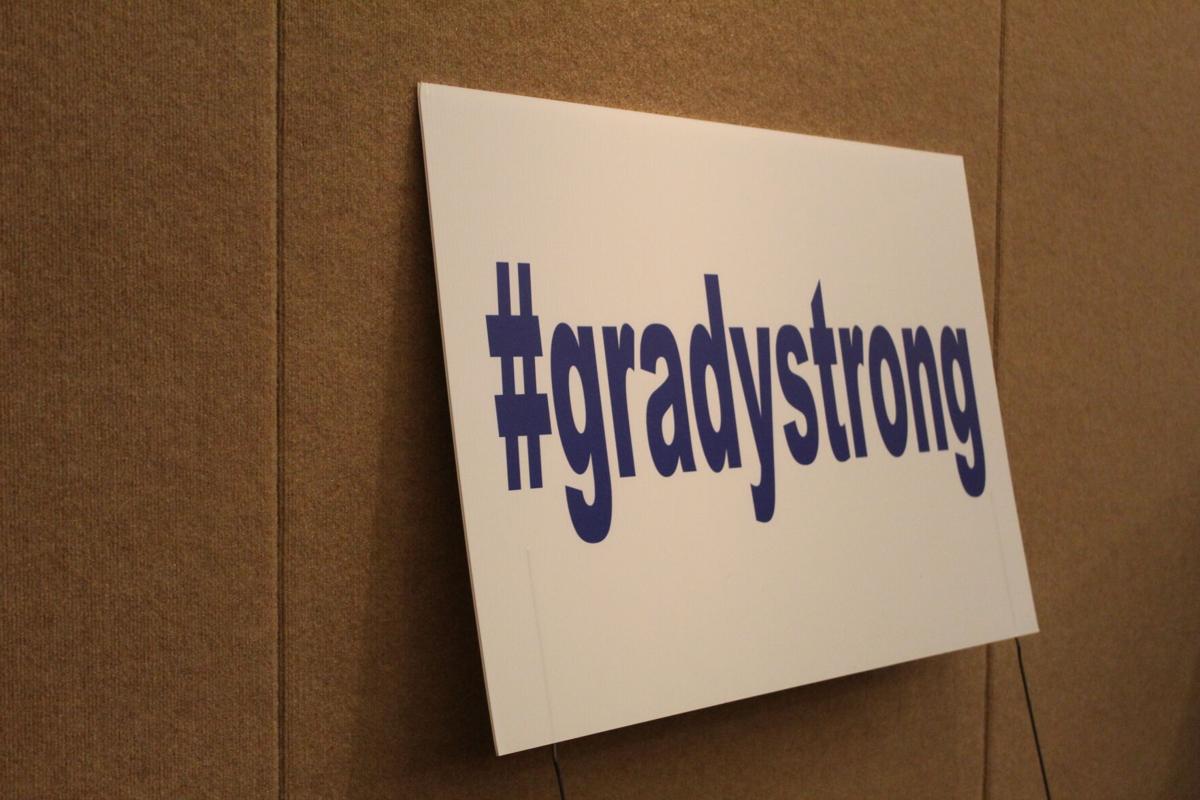 Friends and family of Jenna and Michael Breuer have taken up the #gradystrong tagline in honor of Grady, the family's six-month old.

Michael, left, and Jenna Breuer are glad to have newborn Grady back at home with them after months in the hospital.

Friends and family of Jenna and Michael Breuer have taken up the #gradystrong tagline in honor of Grady, the family's six-month old.

A Coos Bay baby came home for the first time last month, and community members are celebrating his arrival.

Donors from around the region rallying around the Breuer family’s six-month-old baby filled up appointments at a blood drive last week, giving back for a little boy who’s already been through so much.

Even before Grady Breuer was born on September 28, his parents knew he wouldn’t be like most other newborns. Born with hypoplastic left heart syndrome, Grady would essentially be born without a left ventricle in his heart — and would need his first open heart surgery just three days after being born.

“It’s one of the rarest of the rare,” said Michael Breuer, Grady’s father.

Michael and Jenna Breuer, Grady’s mother, have been fighting for Grady ever since before his birth, when Jenna left their Coos Bay home for Seattle Children’s Hospital so the baby could get the medical care he’d need when he arrived.

She stayed with Grady for six months, splitting their time between Seattle Children’s and Doernbecher Children’s Hospital in Portland as Grady underwent monitoring, testing and procedures, including a second open-heart surgery at just four months old.

Along the way, Grady’s surgeries used a lot of blood — so much so that his parents lost track of how many transfusions he’d had. He was on an ECMO life support machine at one point, with multiple units of blood cycling through his body each day.

“A lot of blood was used then also,” Jenna Breuer said.

But over time, Grady’s condition has stabilized, allowing his parents to bring him to the region they grew up in for the very first time.

“I don’t know that words can describe it, honestly,” Jenna Breuer said of bringing Grady home for the first time earlier last month. “There was a lot leading up to that moment of walking in the doors.”

And the homecoming wasn’t just important for Jenna and Grady: The family’s two other children had missed their mom while she was away for half a year (during the pandemic, no less).

“They knew at some point she was coming home soon, but they didn’t know the exact date,” Michael Breuer said. “They were ecstatic to see mom.”

The couple wanted to find a way to give back for the community support, medical care and 40 or more blood transfusions Grady has already received. And when they saw other families in similar situations had hosted community blood drives, they had their idea.

“We both jumped on it because of how many transfusions Grady had to stay alive,” Jenna Breuer said.

But the couple has a busy schedule, with Jenna still taking Grady to Portland regularly for follow-up tests and appointments.

That’s where their friend Debbie Schade came in.

“I just said, ‘Can I help you with it?’” Schade said. She helped the couple plan the blood drive, with the Red Cross and local Army recruiting office, and welcomed each of the donors to the event Wednesday.

Schade said the event was a success: 39 people had pre-registered for the event, and the organizers actually ran out of supplies with every appointment taken.

“They typically don’t get a full turnout,” Schade said.

The event attracted attention from across Southern Oregon, too. Schade said several people had walked in to the event and offered to donate blood after hearing Grady’s story on the radio, including a 95-year old man who’d driven all the way from Sutherlin.

“Incredibly thankful. Beyond thankful,” Jenna Breuer said of those who came to donate at the event. “It shows the community we live in, the amount of support they’ve given us.”

Despite the challenges they’ve faced this year, the Breuer family said they’ve felt a ton of support from the community.

“We have just an incredible network of family and friends that have been there for us,” Michael Breuer said.

And while the past few months haven’t been easy, the couple said getting to have Grady in their life has helped them carry on.

Grady’s also enjoyed being back in Coos Bay: Jenna and Michael said he’s gotten plenty of window-pane visits from family and friends, and his body’s responded well to the move.

“Must be something in that coastal air,” Michael Breuer said.

The Breuer family posts some updates about Grady on a GoFundMe page online at https://gofund.me/838fabe5. More information about giving blood with the Red Cross is available online at www.redcross.org/give-blood.html.