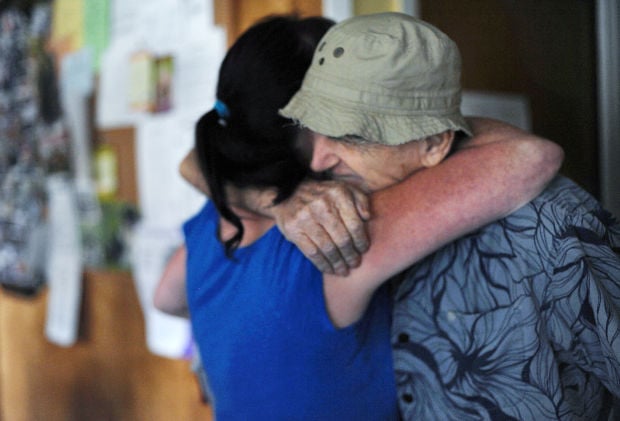 Robert Silvani embraces Cindy Baley, resident manager at Abundant Living Senior Care Home in Coos Bay. Silvani is on hospice and needs morphine and other pain medicines for his bladder cancer. Silvani has been living at the home for a few days and says he loves Baley who has taken such good care of him. 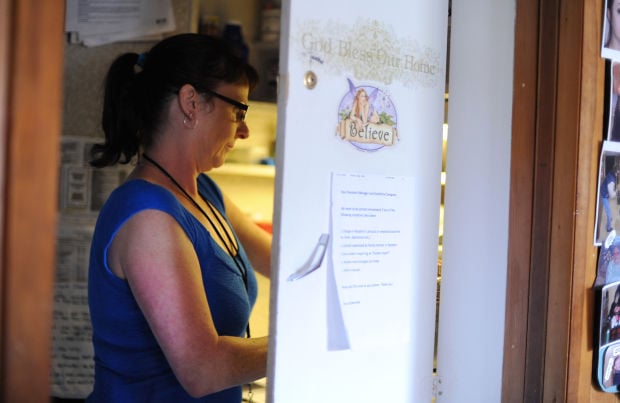 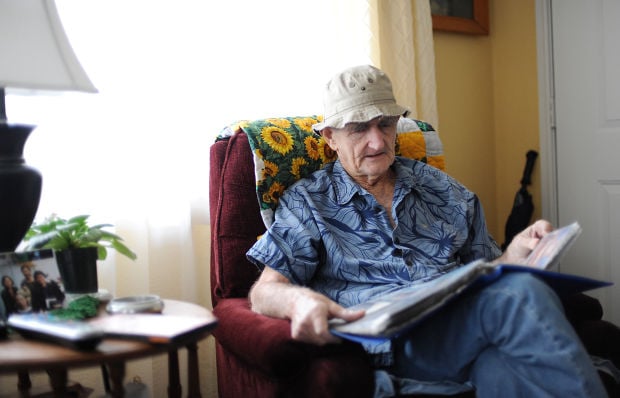 Robert Silvani flips through a photo scrapbook of murals he painted when he was younger. Silvani is on hospice at Abundant Living Senior Care Home in Coos Bay. He was diagnosed with bladder cancer and given a few months to live.

Robert Silvani embraces Cindy Baley, resident manager at Abundant Living Senior Care Home in Coos Bay. Silvani is on hospice and needs morphine and other pain medicines for his bladder cancer. Silvani has been living at the home for a few days and says he loves Baley who has taken such good care of him.

Robert Silvani flips through a photo scrapbook of murals he painted when he was younger. Silvani is on hospice at Abundant Living Senior Care Home in Coos Bay. He was diagnosed with bladder cancer and given a few months to live.

COOS BAY – Anyone looking at Robert Silvani wouldn’t imagine that he has less than six months to live. The spry 72-year-old rides a bike, lifts weights and seems to get around just fine.

But Silvani is on hospice care and takes handfulls of medication to manage his pain, anxiety and other conditions. He also has bladder cancer.

Silvani is the only one receiving hospice care at Abundant Living, a foster home for elderly people who have difficulty taking care of themselves. The severity of Silvani’s condition allowed him to get hospice faster than others, said Cindy Baley, resident manager. Her other patients do not qualify for hospice, some because of new guidelines from Centers for Medicare & Medicaid.

CMS ruled last year that those patients with only a diagnosis of debility and adult failure to thrive are no longer allowed hospice care. The only diagnosis Medicaid and Medicare will accept for hospice coverage now are cancer, liver failure, chronic obstructive pulmonary disease, congestive heart failure, Parkinson’s disease, Alzeimer’s disease or senility.

Baley said she’s cared for eight hospice recipients in the last three years. She said many of them should have received the care earlier than they did. And others should be allowed on it because of their debilitating condition. It took one patient, Florence Giles, five months to become eligible for hospice care, Baley said.

“Normally I can assess them and can get them on in a couple of days,” Baley said. “It was hard. She was suffering so much.”

Baley said Giles passed away just days after getting hospice.

Although now he’s battling an aggressive cancer, Silvani once dealt with a rough childhood in Detroit. He decided he wanted to get away from it and joined the Navy for four years. Then, he returned to Detroit and became a firefighter. He says he “held every union card without having an apprenticeship. (I) knew people and would climb 200 feet in the air when other people wouldn’t.”

For the past 40-some years, he has painted murals and signs. “I did whatever I wanted, wherever I wanted,” Silvani said.

His wanderlust took him all over the country, including Oregon, California, Nevada, Arizona, Texas, Michigan, Florida and Indiana.

He says he met a 10-year-old Madonna in Detroit. He even played a small role in the film, “Lepke,” a 1975 film about gangster Louis “Lepke” Buchalter, when he was in Hollywood. He said he would’ve done more films, but his teeth were bad.

Silvani said he came back to the Oregon coast because of the weather. He was living in Arizona and said he didn’t like the heat.

“Every time I came to Coos Bay it was sunny, but not too hot,” he said.

He was also appreciative of the hospice care he received in Oregon.

“They saved my life,” he said. “They gave me medicine.”

Although Silvani was able to get hospice rather easily, that is not the case for many who need it, according to Linda Furman Grile, executive director of Southcoast Hospice and Palliative Care Services. She doesn’t like what the federal government is forcing hospices to do.

“The new law is a blow to the hospice system,” Furman Grile said. “It’s really pretty horrific from our perspective.”

Patients also stay in hospice a shorter period of time, she said, and some only spend a few hours in the program before they die. Others still may spend up to six months on hospice, but she said those folks are becoming rarer.

Wendy Kohanes, a nurse at Southcoast Hospice, said she was worried about patients’ end of life experience.

“There’s no time for any quality,” Kohanes said.

Furman Grile said in the last five years, she’s seen a lot of changes in Medicare and Medicaid.

“There’s more palliative care in hospitals,” Furman Grile said. “More people are dying in hospitals. All of this has happened in such a short time.”

The government’s changes are meant to cut costs, but many see it as simply shifting those costs to other institutions, Furman Grile said.

According to CMS data, hospice care costs about $159 per day, compared to $683 in a hospital. Other studies also show that hospice is cheaper than hospital care. Patients also need transportation to extra hospital visits.

Furman Grile said she wasn’t sure where hospices were headed.

Patients spend their last days going to appointments and tests instead of being comfortable and enjoying what time they have, Furman Grile said.

“There is less quality of life for patients at the end of their lives,” Furman Grile said. “It’s frustrating when you run a program that you know people out there need.”

Reporter Emily Thornton can be reached at 541-269-1222, ext. 249 or at emily.thornton@theworldlinkcom or on Twitter: @EmilyK_Thornton.

This story has been updated to properly reflect the source of hospice funding cuts.

I read this story and it really angers me When a person gets old they should be able to
get all the care they need free of worry and free of any kind of charge. My heart go's out
to all the elderly people that are sick,hungry,alone,and lonely pushed a side and tons of
other problems. We need to give respect and thank them being a part of our life.
It breaks my heart when I see some one disrespect a elderly person. God bless each and
every one that gives them care and the love they deserve.

Did Robert Silvani have any family?