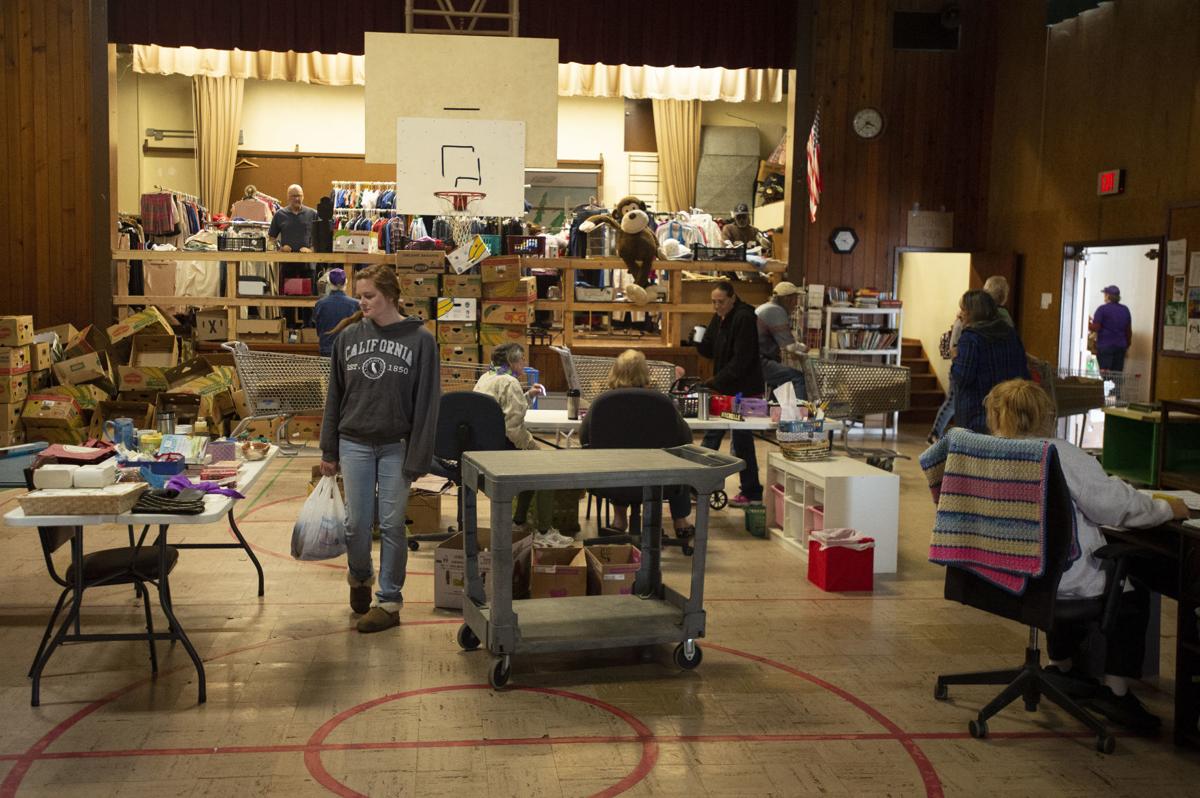 Customers gather groceries Tuesday at the Bear Cupboard Food Pantry inside the former Jefferson School in Coquille. The city owned building is up for sale as pieces of the property have already been sold for residential development. 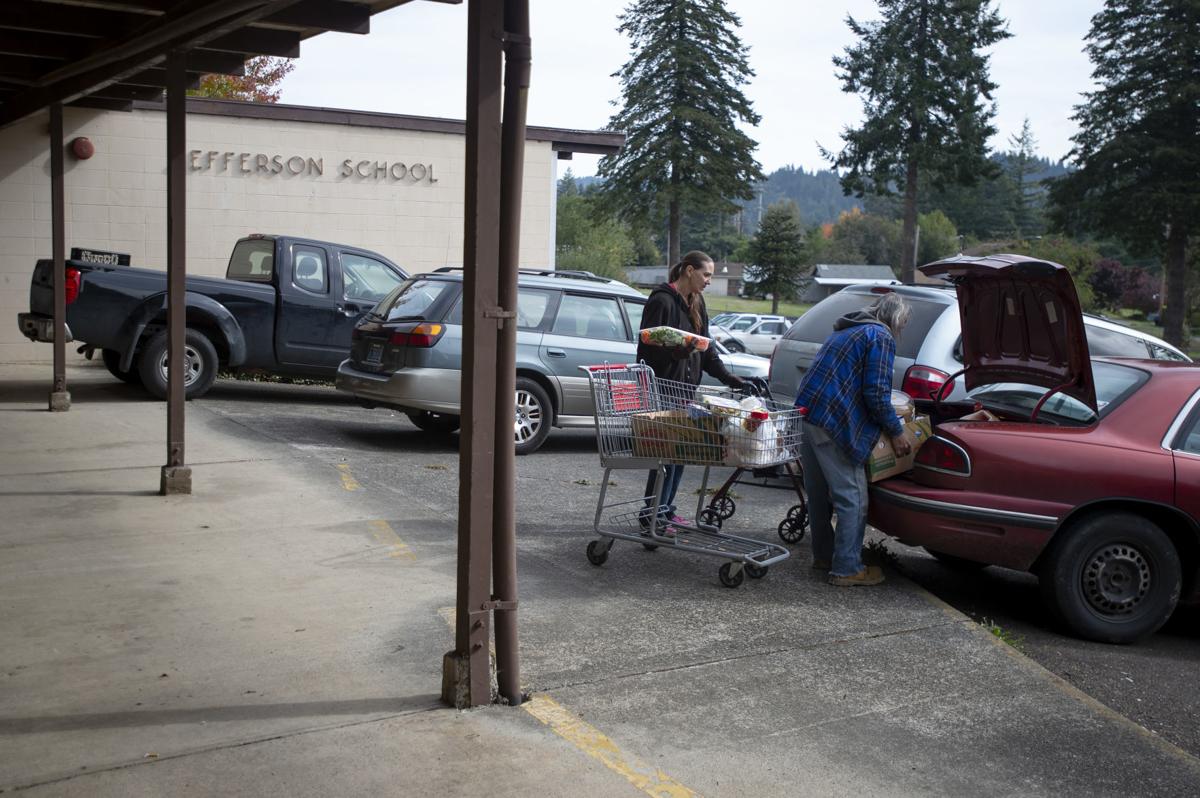 Monique and Dennis Galusky load their trunk Tuesday with food from the Bear Cupboard Food Pantry outside of the former Jefferson School in Coquille. The city, which rents space to the pantry, put the building up for sale, leaving volunteers and customers of the busy community resource worried. 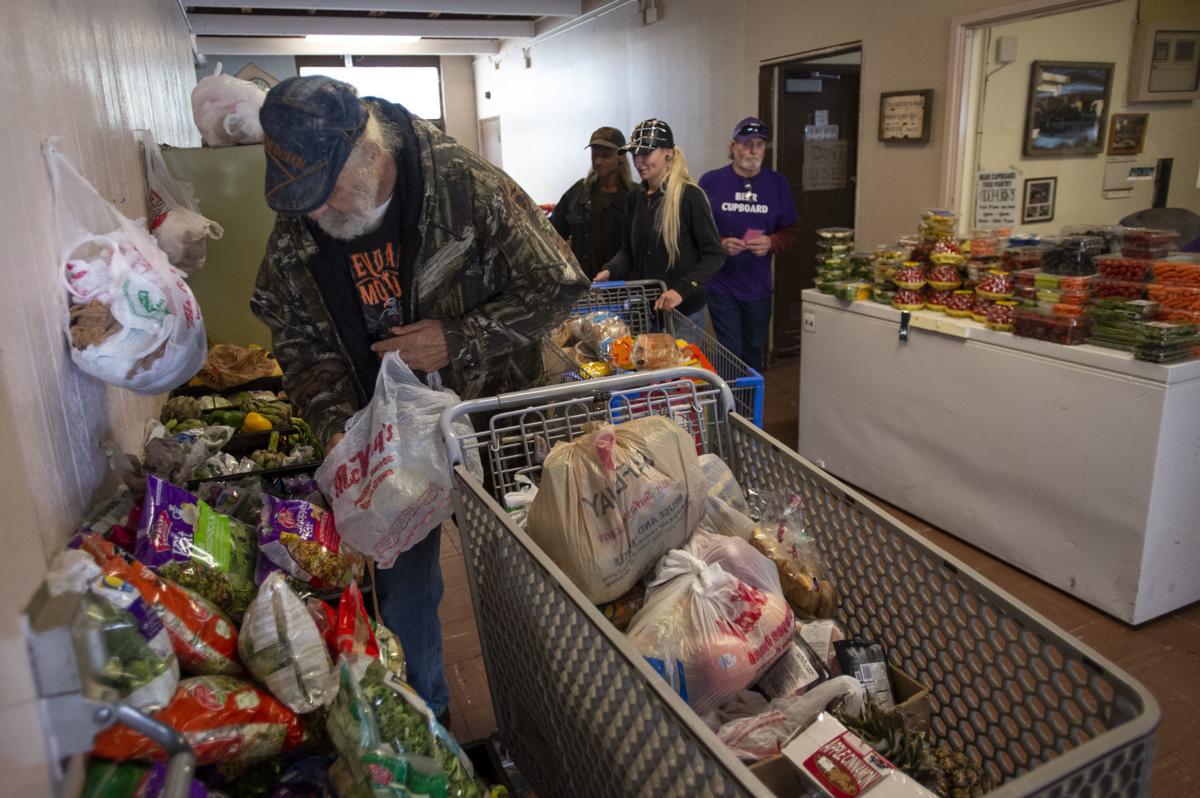 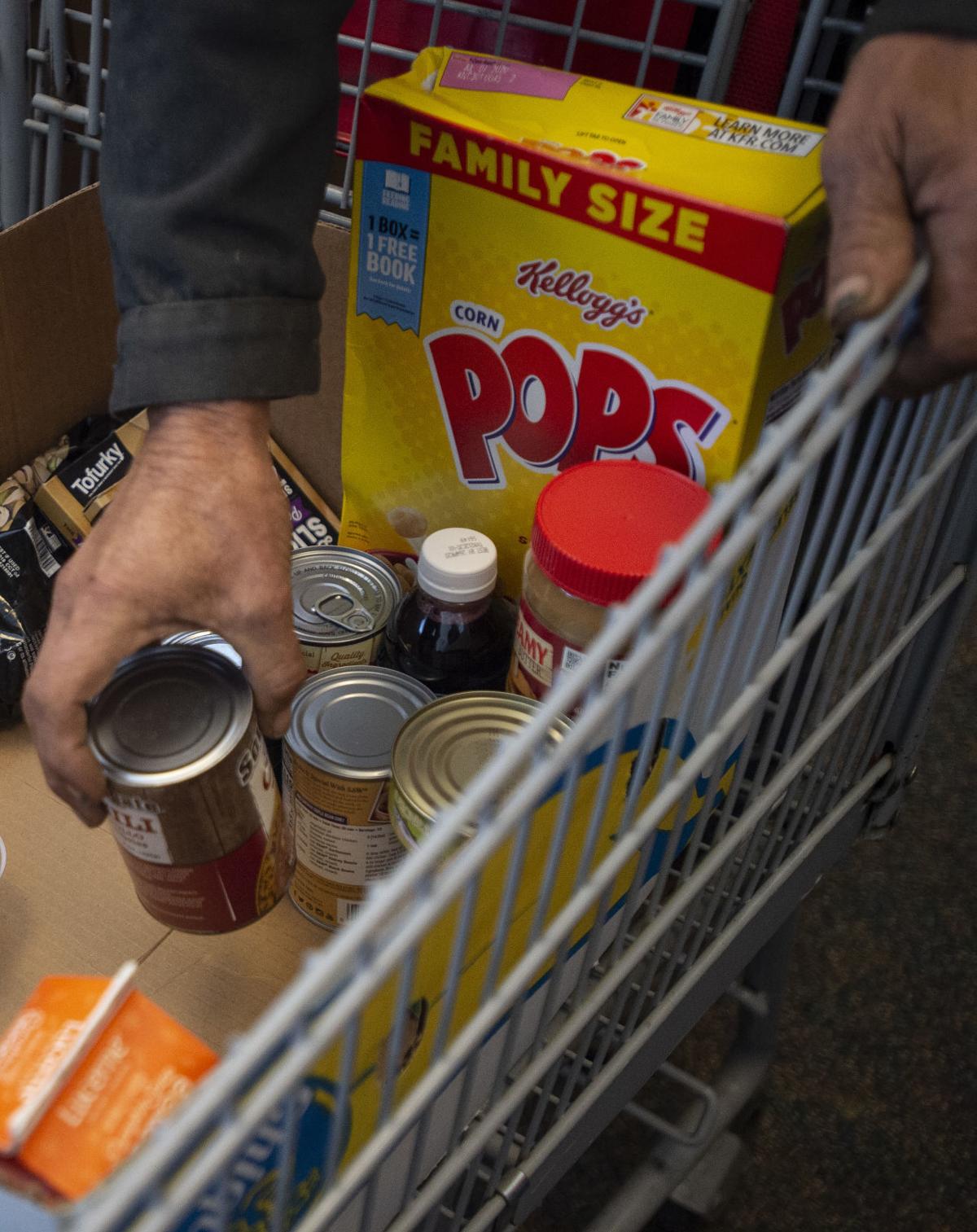 A customer gathers groceries Tuesday at the Bear Cupboard Food Pantry in Coquille. 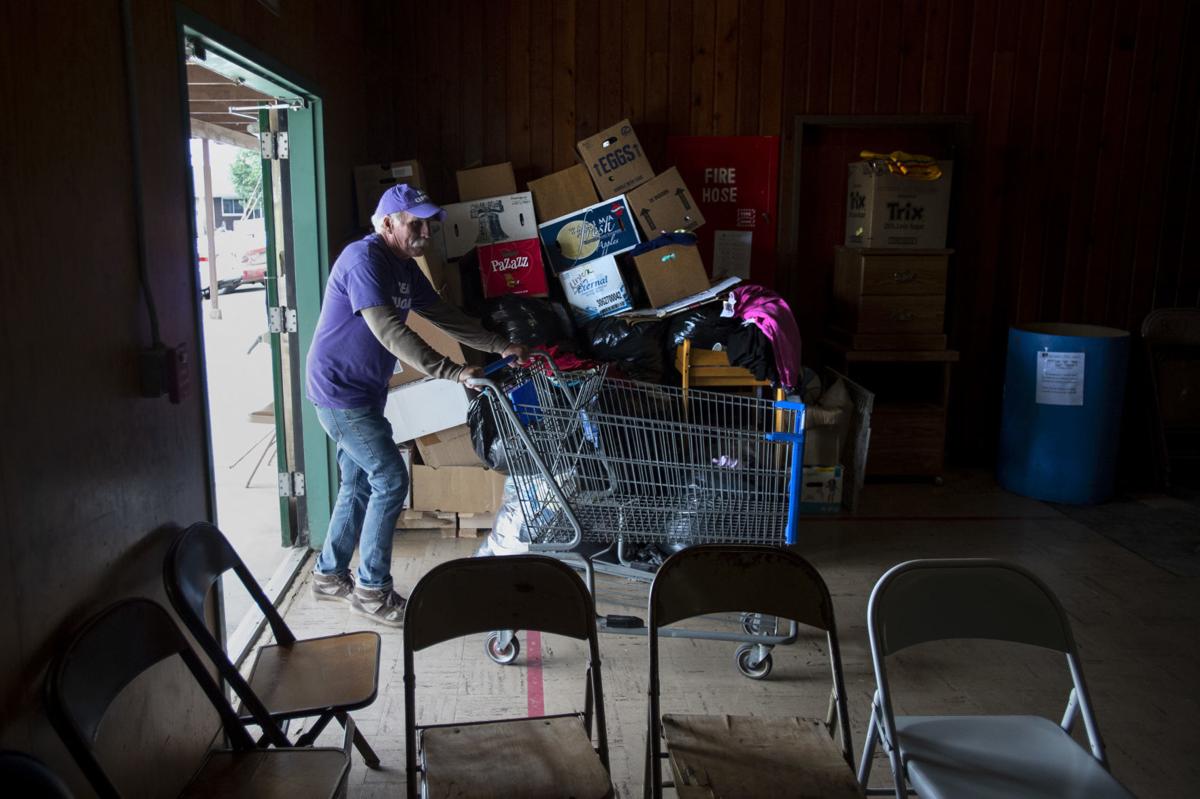 Volunteer Michael Hougardy pushes a cart into the gymnasium Tuesday at the former Jefferson School in Coquille. The city owned building currently houses the Bear Cupboard Food Pantry and is up for sale.

COQUILLE — After about four years of operating out of the old Jefferson School in Coquille, the Bear Cupboard Food Pantry is in need of a new location.

The nonprofit organization, which helps feed local families and individuals in need, was advised at a Coquille City Council meeting Oct. 7 to begin searching for a new location as the city moves forward with its plans to sell the old Jefferson School.

Interim City Manager Roberta Vanderwall discussed the food pantry’s lease agreement with the city during her manager reports last Monday, where she talked about the city’s options of either renewing or continuing its monthly agreement with the Bear Cupboard Food Pantry.

According to Vanderwall, the pantry’s lease agreement had expired sometime in 2018, but has since continued on a month-to-month plan.

In previous discussions with the council, Vanderwall noted the city’s interest in selling the building and officially listed the property earlier this month.

City staff and a couple of councilmembers met with potential developers in September at the old school, which is located on 790 W. 17th St., to do a walk-through and assess the property, said Vanderwall.

Coquille Mayor Kathryn Simonetti said it was the city’s intention at its last council meeting to inform the food pantry of their lease status and to advise them to search for a new location.

“We had listed that property for sale and we have an offer on the building,” said Simonetti. “We will not renew (the food pantry’s) lease, but we will keep them on a month-to-month basis and if we accept that offer and the building sells then they will have ‘x’ amount of time to vacate.”

Simonetti said she couldn’t comment on the details of the offer because the city is still in negotiations with the potential developer.

“We wanted to advise (the food pantry) to be prepared because it is listed, so we thought in fairness to them we should let them know,” said Simonetti. “It would be horrible to not tell them the building is listed … I don’t think that would be fair and they do provide an excellent service for the community and a service that is needed.”

A customer gathers groceries Tuesday at the Bear Cupboard Food Pantry in Coquille.

While no decisions have been made, talks of a potential partnership between the city and the developer have also been discussed, said Vanderwall.

“My thoughts were to build higher-end apartments because of the new subdivision they are building nearby,” said Vanderwall. “We know there’s a need in our community for a food pantry so it’s not that we just want to shut them down. It’s not that at all.”

Director of the Bear Cupboard Food Pantry Kathleen Porter said she officially learned of the building’s listing during the Oct. 7 City Council meeting where she raised her concerns about the pantry’s future.

While she acknowledged she had some awareness of the listing before Monday’s meeting, Porter said the food pantry had been left in the dark about what the city’s plans were. Porter said she’s unsure of how much time they would have to relocate if they were ordered to vacate the property.

“My biggest concern is having to close our doors because we can’t find a new location,” said Porter. “We’re not opposed to moving because the building has a lot issues, but years ago we went out with a grant writer from the South Coast Food Share to find a new location and we were unsuccessful.”

“We found buildings that didn’t quite meet our needs. Some had no parking, others were not handicap accessible and the ones that were perfect the owners didn’t want to sell for various reasons.”

According to Porter, the food pantry, which also offers clothing and household supplies to its clients, is again searching the Coquille area for a new location. Porter said the group plans to reach out to a number of local churches suggested by the council to see if they’ve got space.

The old Jefferson School, which sits on 2.53 acres, was built in 1956 and is currently listed at approximately $250,000. About eight years ago, the city acquired the building during a swap deal with the Coquille School District in exchange for Frontier Field.

Lawrence “Bear” Wear, the founder and treasurer of the Bear Cupboard Food Pantry, said the group moved into the old school in 2015 after it relocated from the Seventh-day Adventist Church in Coquille.

The group had partnered with the church for nearly 20 years before moving due to space issues and had even set up temporarily at Sturdivant Park before working out a deal with the city.

“We have to figure out where we’re going to go,” said Wear. “They told us at the City Council meeting on Monday that they think they’re going to sell the place in three to six months.”

“We discussed it several times and after he left I guess that left with him,” said Wear.

Vanderwall said she has yet to see any documents relating to the food pantry’s proposal to purchase the building. The interim city manager said she doesn’t know what was discussed with the previous city manager nor does she know if he brought the proposal to the council’s attention.

“Since I’ve been mayor I’ve never seen any offer from the food bank,” said Simonetti. “I would say if they want to make an offer they should contact our agent of record, Jennifer Forbes, to do so.”

The food pantry, which purchases food from the South Coast Food Share in Coos Bay, has so far served more than 500 families this year representing over 1,600 people.

Volunteer Michael Hougardy pushes a cart into the gymnasium Tuesday at the former Jefferson School in Coquille. The city owned building curren…

Coquille resident Nicholle Burget, 36, said she hopes the food pantry is able to relocate and continue to serve the Coquille area. Burget said she shops at the food pantry pretty often to provide for her family.

“The food pantry has made a huge impact to my life,” said Burget. “They give you the option to shop for your own items and pick the things you really need. They have all sorts of amazing stuff, fresh fruits, vegetables and packaged salads. It’s one of the best food pantries I’ve been to.”

The pantry, which is part of the Oregon Food Bank’s Fresh Alliance program, also receives donations from local retailers, growers and manufactures. With four freezers and six refrigerators, the food pantry is able to store perishable foods for people interested in those items.

Earlier this fall, the council raised concerns over the pantry’s food conditions, citing that some councilmembers witnessed rotten, spoiled produce.

Porter said the pantry has a zero waste policy and that produce on the verge of going bad gets sorted out and set aside for interested community members to grab for their farm animals.

The pantry undergoes yearly health inspections and its volunteers are required to be certified food handlers by the South Coast Food Share, she added.

“We just hope there are enough people out there who are interested or understand the need for this place,” said Porter. “If we don’t find a building that works for us, this place will unfortunately have to close.”

Student enrollment is up at the Coquille School District so far this year. As of Monday afternoon, there were 1,280 students enrolled for kindergarten through 12th grade, which is up 55 students compared to last year.