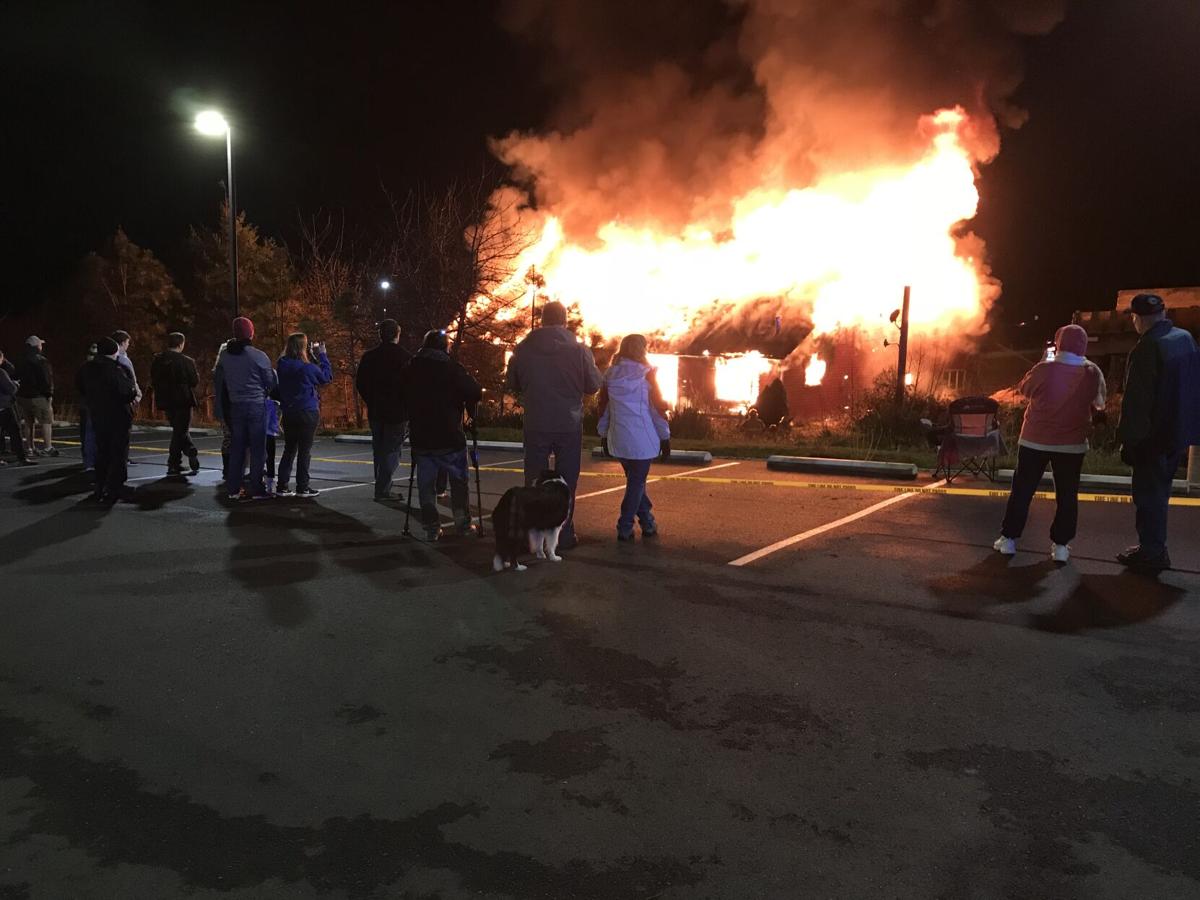 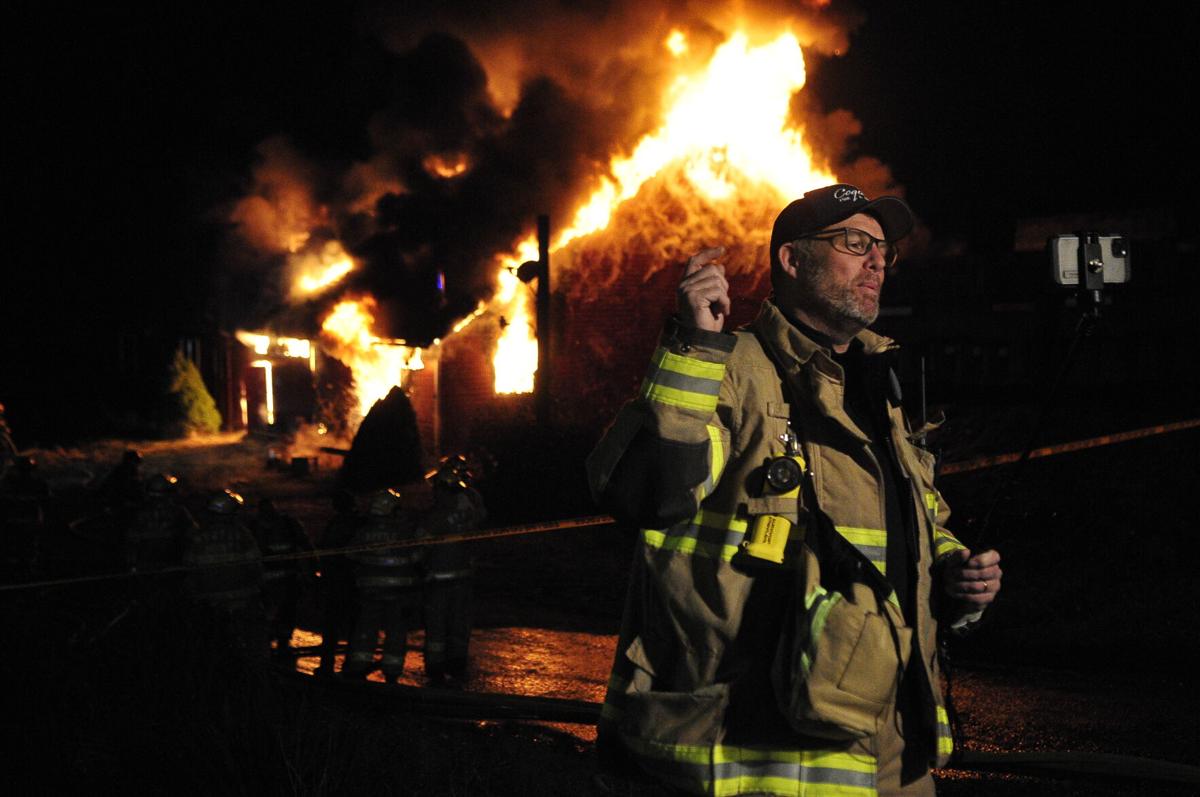 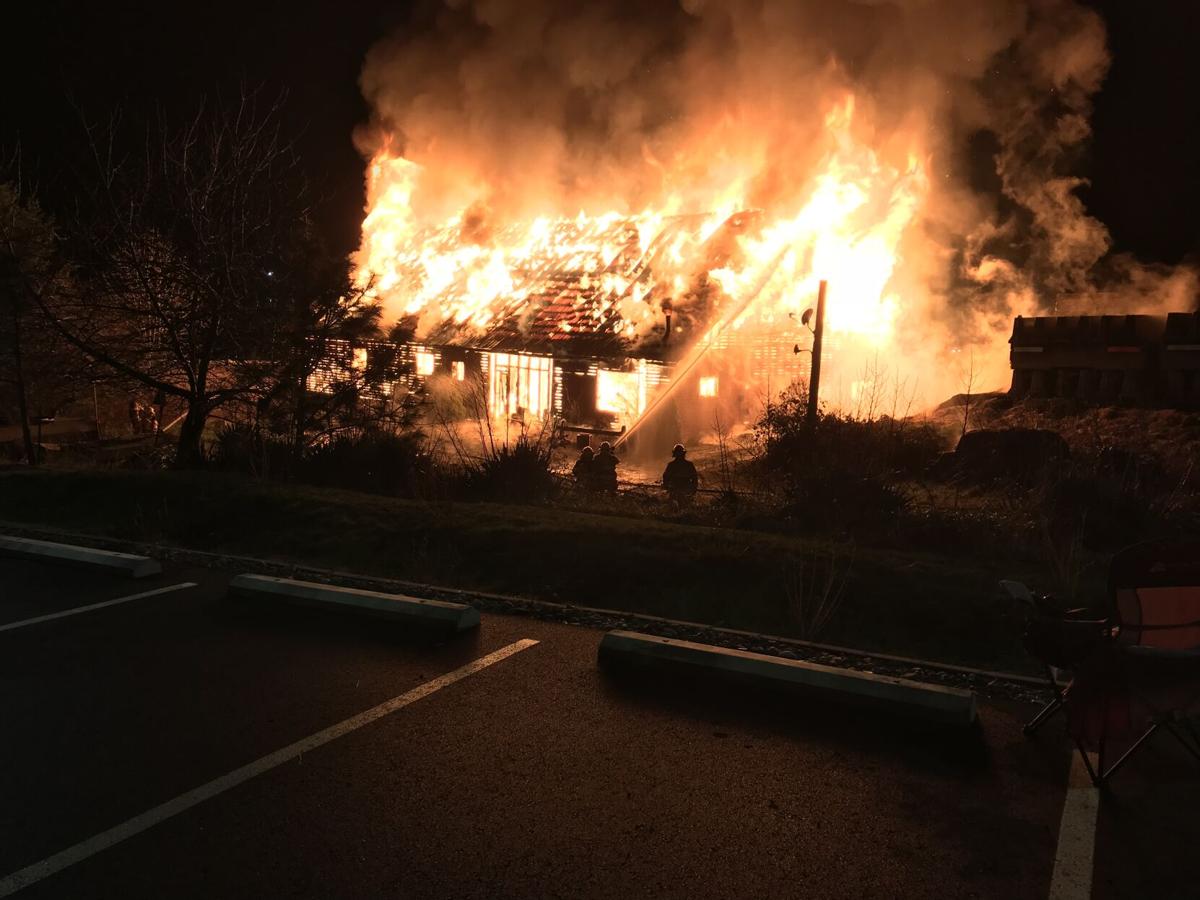 Before the barn collapsed in on itself, members of the Coquille, Myrtle Point and Greenacres fire departments sprayed water along the edges to keep the fire from spreading. 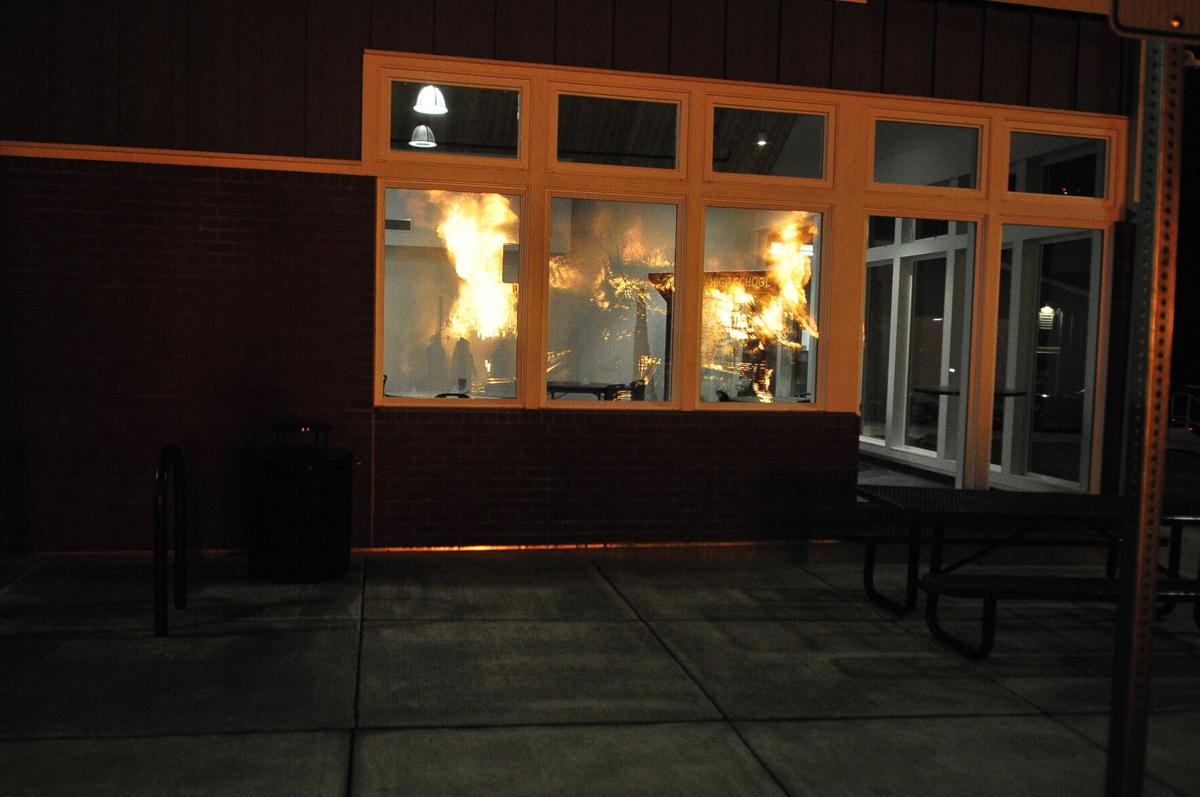 The reflection of the burning barn could be seen in the windows of nearby Winter Lakes High School.

Before the barn collapsed in on itself, members of the Coquille, Myrtle Point and Greenacres fire departments sprayed water along the edges to keep the fire from spreading.

The reflection of the burning barn could be seen in the windows of nearby Winter Lakes High School.

COQUILLE — A big crowd gathered to watch as flames consumed an old barn at the west end of Coquille on Thursday night.

Sweeney is the superintendent of the Coquille School District, which owned the old barn and needed it removed.

Ferren is the Coquille Fire Chief, which used Sweeney’s problem as an opportunity for training for his firefighters, as well as Greenacres and Myrtle Point, which joined in.

“I think every fire, every training we do, each of us learns something,” Ferren said.

In the case of the barn, Ferren was able to let several different teams of firefighters enter the building and knock down the flames, seeing how the fire was developing so that they will be more familiar with the tendencies in the case of an unplanned structure fire.

“Often times, we don’t get to make a lot of entry (into a burning building),” Ferren said before the fire was started.

Later, as the flame overtook the building and the firefighters switched their focus to making sure the building fell in on itself, Ferren said the training went about as well as possible.

Also helping out Thursday night were the Coquille Police Department and Oregon Department of Transportation, who aided with traffic control.

The event drew a big crowd to the parking lot of the adjacent Winter Lakes High School and the neighborhood on the other side of Central Boulevard.

And there were many more watching as Coquille Mayor Sam Flaherty, also one of the volunteer firefighters, posted the event live on Facebook. Flaherty said the online crowd ranged from 60 to more than 100.

He described the action and the value of it to the fire department to those watching online.

Ferren said Coquille has about 30 total firefighters on its current roster, and the volunteers are particularly important since there are only four full-time staff members in the department, himself and three others who are firefighter/paramedics.

Sweeney contacted Ferren a few weeks back to ask if the fire department would be interested in using the building as a burn-to-learn exercise.

Ferren investigated the building to make sure “there’s a benefit to us to do it” and also that there were no environmental reasons, such as asbestos, that would make the exercise unsafe.

He added the fire department is “most definitely” grateful to the school district for making the building available.

Sweeney got the honor of actually lighting the fire before retreating to a safe distance to watch the exercise with the rest of the spectators.

“That was fun,” he said. “It’s been a long, crappy year. To be able to burn something is fun.”

He viewed the evening as a win-win all the way around.

“This saves me a lot of money,” Sweeney said. “It’s great for the fire department — they get the practice. It’s fun for the community, they get to come out and see an event.”

The timing of the burn-to-learn was significant for the school district.

In a couple of weeks, the Oregon Department of Transportation is going to begin a major project on Highway 42 nearby to level out several depressions that have developed over the years. To do that, the road crews need to remove hundreds of dumptruck loads of material before building the base of the roadway back up with rock.

All of that material will go where the barn previously sat, leveling that part of the property. The school district hopes to build a gymnasium on the site, part of a bond measure the district voters will decide on in a special election in May.

Like the destruction of the building, the road project is a boon for the school district. Sweeney estimated the value of the fill material to level the site at $300,000.

Sweeney would love to see the gymnasium on the site by the start of the 2023-24 school year — it’s a long process that includes bond approval and architectural planning.

Thursday’s part of the process was much faster.

After Sweeney lit the fire, the crews went in several times to knock down the flames before they overtook the building. About 45 minutes later, the walls had fallen in and the crowd had mostly dispersed, the evening a success for the firefighters and school district alike.