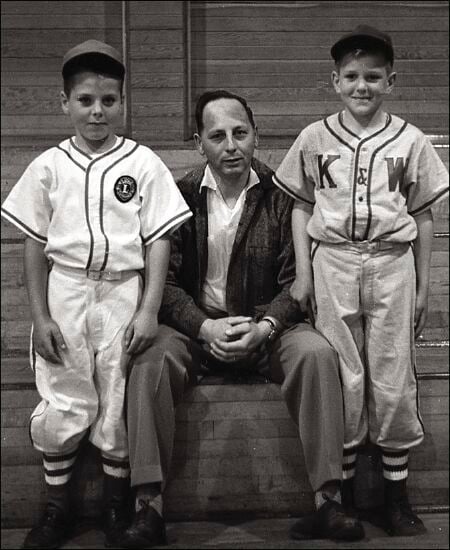 The first picture I am I have shared pictures of Moore Mill & Lumber Co. several times in past columns, but never with such interesting information as I found in a picture caption in the Jan. 8, 1959, Western World.

" 'Bandon's Bread Basket' is what it has often been called, and true enough that is what it has been for more than a half-century. This is a photo of the Bandon plant of the Moore Mill & Lumber Co., showing much of the lumber storage area on solid ground.

"Since D.H. Miller, Sr., took over the management there have been a lot of improvements made. Now his son, Walter, is in charge and improvements and successful operations are continuing.

"Among recent betterments were the filling in of tidal areas to make storage space for lumber. It took thousands of yards of dirt to make the fill, but it has paid off, and probably will continue to do so as wooden wharves, built on piling, are gradually supplanted. It adds to the permanency of the institution by cutting down on maintenance costs.

"The year just concluded by the mill has not been unusual but resulted in the normal cut of about 40 million board feet of lumber. Including plant, woods, and associated services and facilities, the plant provided payroll for at least 250 families. In addition to this, some 40 contract haulers obtained much of their subsistence from this source.

"Permanency of payroll is the desire of every community, therefore it is interesting to note that several employees of the Moore Mill have been on the job for more than 50 years. It is pointed out as an indication of the healthful management-employee relationship that has existed over the years. Fathers, sons, and grandsons have been, and are still, employed at the plant. Truly, it has been, and still is, a community 'bread basket.' "

By the mid-80s, the mill had discontinued operations, and was in the process of being dismantled when it burned in 1987.

The second picture I am sharing is headlined "Freight Teams Operated Between Bandon and Curry Points." It was in the April 23, 1959, Western World.

The caption reads: "Transportation was not as speedy in the 'good ole' days' as witnessed by the photo above. Four-horse teams furnished the 'horse-power' that conveyed freight from the Bandon seaport to northern Curry County communities.

"Most of the freight, which included merchandise for stores, came by steam schooners from San Francisco, and was unloaded at the Central Warehouse in Bandon and either transported by boat up-river or by horse-drawn vehicles south to Curry points."

I love this third picture of a man who would often be referred to as "Mr. Little League." Ernie Luther was responsible for many of the good things that happened with the Peewee baseball program during its early years.

Ernie and his wife, Dona, owned Beach Junction Grocery and raised their family in Bandon.

Ernie is pictured here with his son, Jim, a member of the Lions team, at left, and Rick Howard, who was on the K&W team. My guess is that Rick is now in his early 70s, so you can figure out how long ago this photo was taken.

I was sorry to learn that long-time Bandon businessman Larry Hardin had died July 14th at the age of 78. Larry and his wife, Joyce, moved here in 1976 and started Hardin Optical, which has provided jobs for many Bandon families.

A service for Larry will be held Saturday, July 24, at 1 p.m. at Bandon Christian Fellowship.

Among his immediate survivors in addition to his wife are a daughter, Rebecca Maul, and his son, Michael and wife, Megan. Also surviving are six grandchildren.

A new child tax credit being paid out to U.S. parents will supposedly prove the virtues of universal basic income.

The child tax credit will deliver $3,000 per child ($3,600 for children 5 and under) to the vast majority of families over the next year. Half the amount will be provided in monthly payments over the next six months, and the rest after families file their tax returns in 2021.

This is said to be the closest the federal government has ever come to funding a nationwide experiment in the concept known as universal basic income.

My question would be: how will this help the struggling small businesses, who are desperate to find people who want to work? This appears to be further incentive for people to remain out of the job market.

Last week, I shared part of Reg Pullen's piece about the salmon crisis on the Coquille River, and promised that I would share the rest of the story this week.

It is clear that the days of the "salmon derby" are over for our area .... at least for the Coquille River, which has been completely closed to all salmon fishing in 2021.

Among the problems are an abundance of stripedbass, which thrive in the poor water conditions that may be dooming salmon smolts.

In 2019, the wild Chinook bag limit was reduced to one fish a day and two per season, and fishing for salmon was closed above Coquille's Sturdivant Park. Also, efforts began to eradicate striped and smallmouth bass by electroshocking, and all size and bag limits were dropped to encourage anglers to kill as many bass as possible. The situation was deemed so serious that spearfishing for bass was allowed on the upper river.

"Now, for 2021, all salmon fishing has been closed on the entire river, and the war on the introduced bass species in accelerating," said Pullen. "However, very little effort is going into rebuilding the faltering hatchery program, that at one time held so much promise. Bandon anglers fondly remember the glory days in the mid 1980s when smolt releases at the mouth of Ferry Creek created a 'sidewalk fishery' where anglers stood shoulder to shoulder along the marina to catch their limits of salmon. The Port of Bandon is installing a handicapped accessible fishing pier along the marina this year in the hopes that one day that fishery can return.

"The hope would appear to be unlikely in the near future. Since 2014, the ODFW has planned to release around 155,000 smolts to the lower river, from an acclimation site on Seven Mile Creek near Rocky Point as well as at the mouth of Ferry Creek at Bandon. Although their plan called for the release of 100,000 unfed fry from hatch boxes along the river, no effort has been made to achieve that goal. Since 2019, they have not released any smolts at Seven Mile Creek, due to a dispute with the landowner whose property they were using as the release site, and releases at Ferry Creek have been minimal," Pullen added.

He said that up until 2018, the 70 pairs of wild spawners needed to reach target smolt goals were being netted from the river near Myrtle Point, but only 20 were netted in 2018. Since then, no wild fish have been used to augment hatchery production, nor are there any planned for this year. The ODFW held out hope that increasing smolt releases at Ferry Creek would result in enough returning spawners to support the hatchery program, but that has not happened.

"The initial thought was that returning hatchery Chinook would swim up Ferry Creek to the hatchery, where they could be spawned. Due to a severe drought and ever later fall freshets that would allow salmon to navigate the brush- and beaver-dam-choked creek, no salmon have returned to the hatchery. In 2020, a trap was installed just upstream from the Face Rock Creamery, but only seven fish were captured. Seal predation at the mouth of the creek may account for the poor returns, but it appears likely that the entire hatchery program is doomed to failure unless drastic measures are taken."

I will talk more about that in next week's column.

I will have to say that my first meeting as a member of the board of directors of the Southern Coos Health District proved to be interesting, to say the least.

A press release written by Amy Moss Strong, marketing and development coordinator for the district, explained that "following an executive session, the board exercised the termination clause of the CEO Eugene Suksi without cause, saying they had 'lost confidence in his ability to effectively lead the hospital.'

"The board voted 3-1 in favor of the motion, made by secretary Brent Bischoff, who was joined by Norbert Johnson and newly sworn-in member Mary Schamehorn voting in favor, while Chairman David Allen voted against the motion. Treasurer Edie Jurgenson was present, but had tendered her resignation prior to the vote, effective immediately," according to the press release.

"The executive session was held to consider a report from a human resources attorney who conducted an investigation under unanimous direction of the board into serious complaints board members had received from hospital employees.

"Following the executive session, the board voted 3-2 (Bischoff, Johnson and Schamehorn) to hold the report as private and confidential under attorney-client privilege."

At that time, Jurgenson announced her resignation from the board, and handed Allen a prepared letter, citing health concerns.

The next morning following the termination of Suksi, Allen submitted his resignation from the board, effective immediately. He served on the hospital board for 17 years.