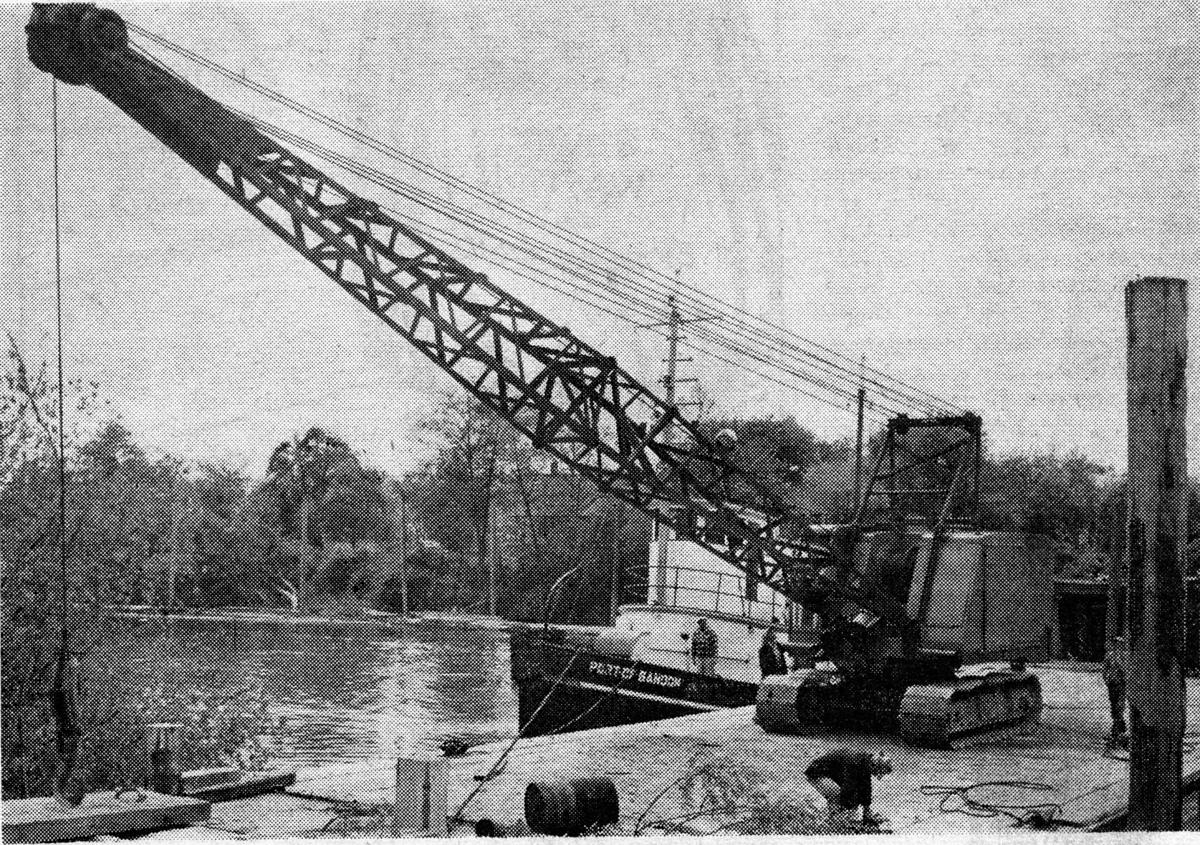 This photo from 1952 shows a 60-ton bucket dredging machine tearing up the earth near the old Pioneer Mine. The work was beginning to continue the search for gold in the area. 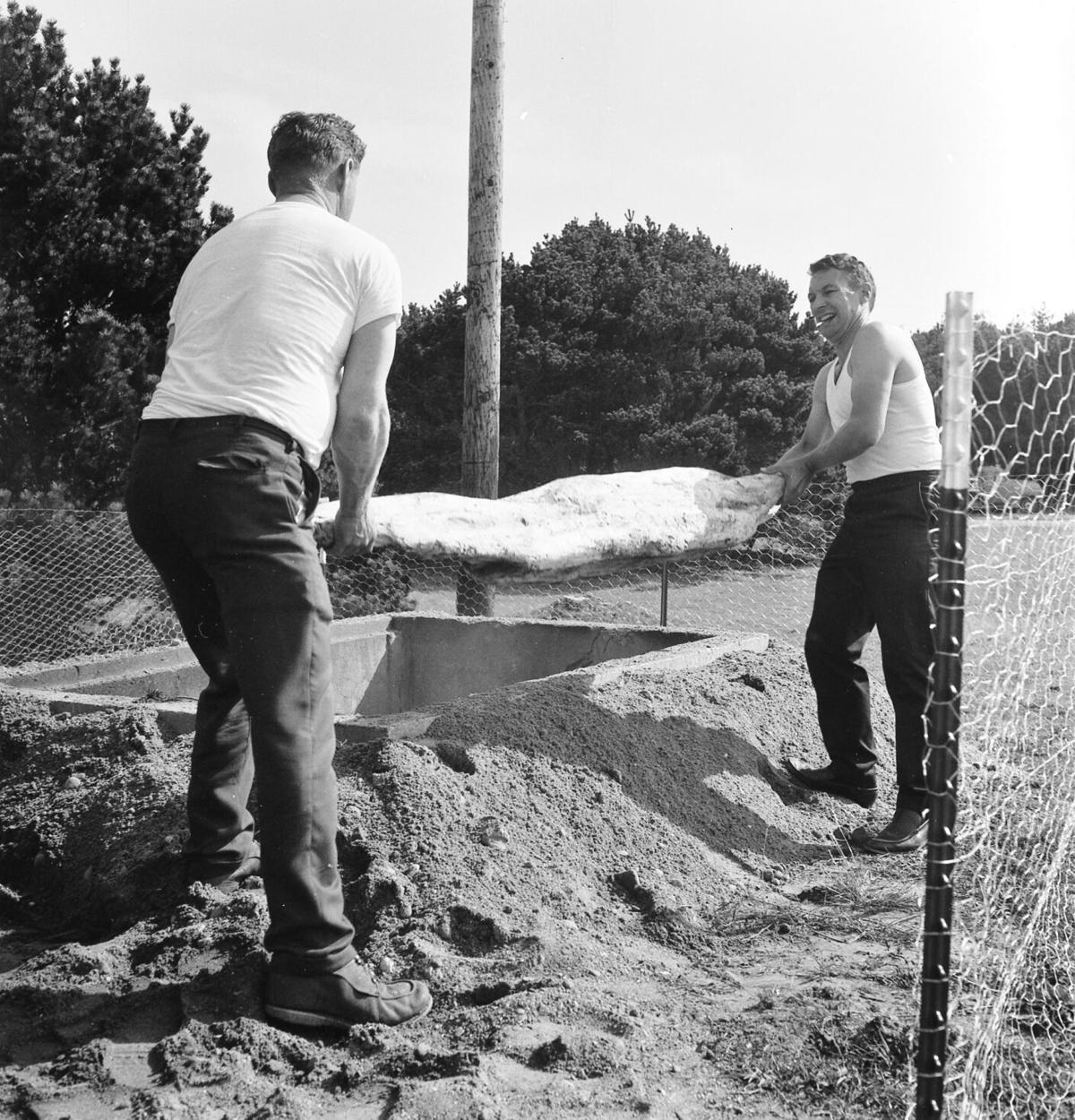 Myron Spady, back to camera, and Tom Gant prepare to toss the meat for the Cranberry Festival Beef Barbecue. 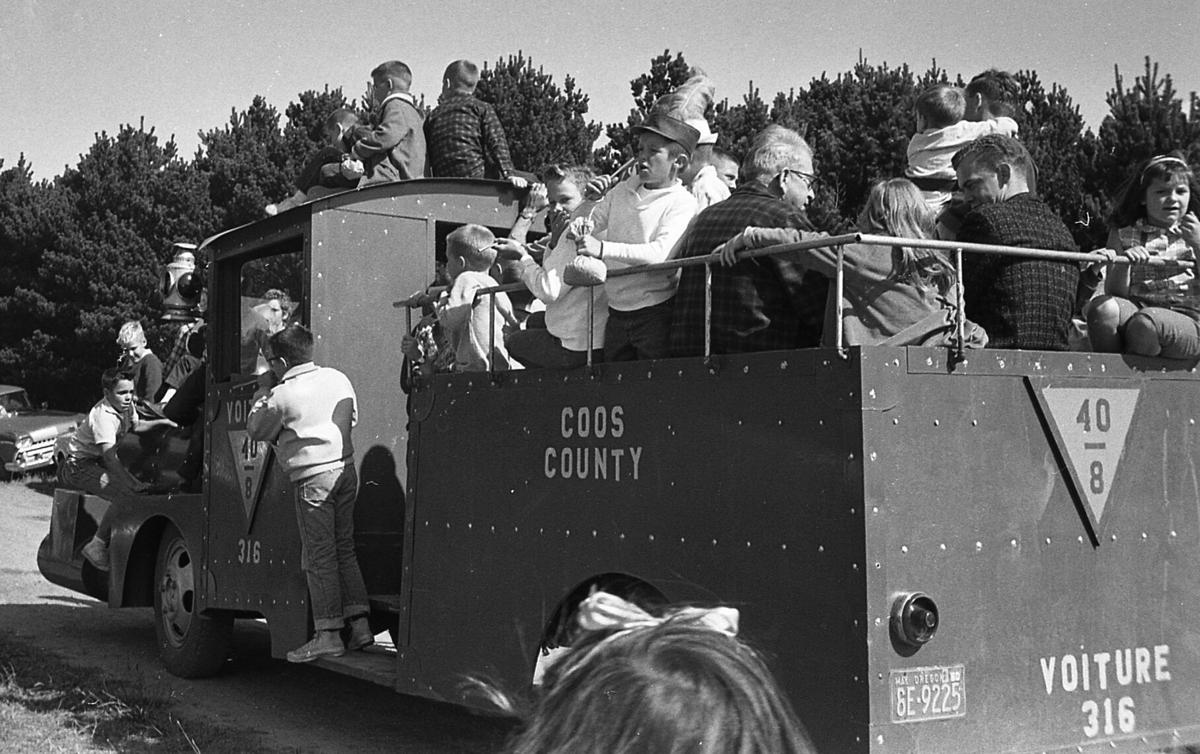 This photo from 1952 shows a 60-ton bucket dredging machine tearing up the earth near the old Pioneer Mine. The work was beginning to continue the search for gold in the area.

Myron Spady, back to camera, and Tom Gant prepare to toss the meat for the Cranberry Festival Beef Barbecue.

The realization that I can copy photos out of my original Western World newspapers, and that they print well as evidenced by the photo of the Coast Guard station last week, has opened up a whole new avenue for me to share with you. This week, I want to talk about efforts to mine black sands in the Seven Devils area for minerals.

I am sharing a picture from the May 22, 1952, Western World of a 60-ton bucket dredging machine that was to begin tearing up the earth at the old Pioneer mine, north of Bullards, where the Coast Mineral company was setting up for stripping operations.

The caption explains that "instead of tunneling to follow the black sand deposits, as was done in years past, the new operation will uncover the black sand stratus from the top down. The 2-1/2 yard bucket will then scrape up the black sands and load them onto conveyors which will take them to the concentrating and separating plants.

"The picture was taken after the machine had been loaded from a railroad flatcar onto a barge and the tug Port of Bandon is standing by ready to tow the barge to Randolph where it was unloaded and from which point the machine was 'walked' under its own power to the mine."

"With nearly all the required machinery at hand and most of it installed and ready for operation ... at the old Pioneer mine on Cut Creek on the Seven Devils road, practically concludes preparations for an exhaustive project to extract the valuable minerals from the black sands that nearly 100 years ago caused a gold rush to this area and resulted in the building of a community of several thousand people known as Randolph."

Unfortunately, I don't have access to papers dating that far back, but I am sure it was quite a story.

"Actually mining and concentrating of black sands is scheduled to begin within a short time, following three years of quiet development and the expenditure of more than a quarter of a million dollars by the Coast Minerals company.

"The plan for the old Pioneer, and also for the Eagle, is to strip off the overburden from the black sands, haul them west across the Seven Devils road to a screening plant where rocks and other heavy materials will be eliminated, then convey the sands by overhead conveyor belt to a stockpile slab for the concentrating plant.

"Experiments to date indicate that with modern equipment installed, the gold and platinum project will be a profitable venture in itself."

History will show that like the several attempts at drilling for oil in the Bandon area, no one got rich mining for gold, platinum or oil.... but it wasn't for a lack of trying.

I loved the second picture, taken during the Cranberry Festival in 1962, because I was able to identify several of the people in the photo. After Googling it, I learned that 40/8 was a society of American veterans and service members committed to charitable and patriotic aims. This vehicle apparently belonged to the Coos County 40/8 group, who brought it to the festival and took people for rides around City Park. I remember taking the photo, but it was not one that was printed in the paper.

Facing the camera on the front of the vehicle is Pat Fraser, and standing just behind the door, I believe, is Greg Fraser. Riding in the back, wearing the plaid jacket, is Cliff George, long-time owner of the Bandon Food Center, which was located just south of town in the building now owned by Larry Hardin, where Brian Vick sold antiques.

The third picture I am sharing was taken in City Park in September of 1966 as Myron Spady, back to camera, and Tom Gant prepare to toss the meat for the Cranberry Festival Beef Barbecue into the big open pit at the rear of what was then the new bandstand. Today, both men are in their 90s and still live in Bandon. An article said a record crowd of 950 people enjoyed the barbecue lunch that day.

Chere Brazel was crowned queen of the festival the previous night during the annual coronation, with the crown placed on her head by the previous year's queen, Sharon Ward.

I was sad to learn that George Trott, a lifetime resident of Bandon who served over 30 years as commander of the local VFW Post, died at Bay Area Hospital on June 23 from complications of lung cancer and pneumonia. George served as an MP in the U.S. Army, with two tours of duty in Vietnam. I have known George most of my life, as we were in the same class, having graduated together from Bandon High in 1957.

Among his immediate survivors are his wife, Myrna, Bandon; daughters, Janice Hester, Bandon, and Cindy Kirk of La Pine; and sons, Gary Trott of Bandon and Kelly Trott of LaPine.

The family said that memorial services will be held at a later date.

I heard from a good friend that her neighbor, David Burns, who lived on Michigan Avenue, had died recently. David, who served his country in the U.S. Coast Guard, was 96 years old.

I also learned that Marilyn Noorda's 62-year-old son, Jeffrey, died suddenly on June 24. Many of Marilyn's Bandon friends knew Jeffrey and saw him recently when he was in town to move his mother to her new home in Salt Lake City so she could be near her family. My heart goes out to Marilyn and her family. Marilyn is a sister to former city councilor Nancy Drew, and she served on the hospital board some years ago. She and her late husband, Darwin, were active in the Good Neighbors club.

Several things have happened lately on the housing front.

First, the Bandon Planning Commission approved, with conditions, a Conditional Use permit for a 48-unit market-rate apartment complex, to be built along Seabird Drive near the intersection of Highway 101 on a 3.16-acre parcel owned by a West Linn man, Jim Murray of Bently, LLC.

The 48 apartments, which will be a mix of one- and two-bedroom units, will be built in four two-story buildings.

I also learned last week that the owners of Bandon Dunes Golf Resort have purchased the Lake Bradley Christian Retreat property, which will be turned into staff housing.

The resort was built in the late '40s by Leona Koff and was known as Tanglewood for many years. In early 1962, it was purchased by Col. Homer B. Millard and his wife, Esther, who moved their Millard School from Langlois Mountain to the facility. Several months after the move, Col. Millard died. His wife continued to operate the school for several years. Millard was a preparatory school for the military academies and was attended by young men from all parts of the country.

Some years ago, it was purchased by the Applegate Christian Fellowship, and was primarily used as a site for Christian retreats.

The property, which is on the south side of Beach Loop Drive and fronts on Bradley Lake, can house several hundred people

While attending the annual membership meeting of the Bandon Chamber, I learned that unless volunteers step forward very soon, there may not be a Cranberry Festival this year. Lori Osborne, the new chairman of the chamber board, said the reality is: "We have seven or eight people and we need 45 to 60 volunteers to make this happen."

People are urged to sign up at the visitor center if they are willing to help in some capacity, or they can attend a meeting at 5:30 Thursday, July 1, in City Park to learn more about what is needed. People can also contact chamber Executive Director Margaret Pounder at mcp@bandon.com or call the chamber visitor center at 541-347-9616.

Chosen to represent the festival as princesses this year are McKenzie Williams and Madisan McCabe. Kenzie Basey will again serve as director of the court.