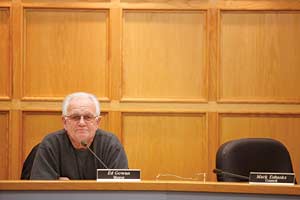 By Benjamin Brayfield, The World Lakeside Mayor Ed Gowan reacts after a vote to appoint a new council member. With Mack Eubanks absent, the council was once again unable to reach a majority vote. The impasse is cause for recent tension among council members and Lakeside residents. 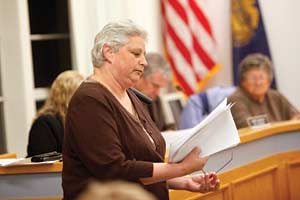 By Benjamin Brayfield, The World Midge Viedo hands the Lakeside City Council a 'warning" petition of 147 signatures at the beginning of Thursday's meeting urging the three non-voting councilors to appoint one of two candidates to a vacant council seat. Dissatisfied with their response, she is starting an official recall petition.

By Benjamin Brayfield, The World Lakeside Mayor Ed Gowan reacts after a vote to appoint a new council member. With Mack Eubanks absent, the council was once again unable to reach a majority vote. The impasse is cause for recent tension among council members and Lakeside residents.

By Benjamin Brayfield, The World Midge Viedo hands the Lakeside City Council a 'warning" petition of 147 signatures at the beginning of Thursday's meeting urging the three non-voting councilors to appoint one of two candidates to a vacant council seat. Dissatisfied with their response, she is starting an official recall petition.

LAKESIDE -- A recall campaign is now in motion after mounting frustration with a council that, the chief petitioner says, is acting like a group of children.

Midge Viedo of Lakeside will begin a campaign to oust Councilor Sue Allen and may already have the conditional support of 147 people in Lakeside.

Viedo was spurred into action by a continuing stalemate over the appointment of a new councilor to the city's vacant seventh seat.

Three councilors have rejected the applicants for what Viedo calls personal tiffs rather than reasons that are in the best interest of the town.

Viedo said she isn't in league with either of the two applicants -- Stacy Dunn and Dean Warner -- but couldn't sit idle after Lakeside's Thursday night meeting.

'I don't believe that we elect officials to do their will. I believe they are elected to do the will of the people," she said. 'I saw no compromise. I saw no acknowledgment by the 'no-vote-three' that they are aware of our desires."

In Thursday's meeting, Councilors Sue Allen and Elaine Armstrong voted 'no" to the appointment of either Dunn or Warner for the third straight meeting. Councilor Mack Eubanks, the other member of the so-called 'no-vote three," was not in attendance because he was on vacation in Port Orford.

The council debated whether it was possible to make a decision with Eubanks absent -- giving one side of the council a majority to appoint a candidate -- but the council's rules were too unclear.

To try and breach the stalemate, 'no-vote" councilors Allen and Armstrong made a motion to amend their election ordinance so the council could re-post the vacancy and find new candidates.

This was blocked by the other three councilors: Mayor Ed Gowan and Naomi Parker and Ed Langley.

'It sounds like some way to get around the charter," Gowan said. 'I don't feel very good about it, but that's just my opinion."

Armstrong said that the council's election ordinance was too unclear to help them in these deadlocked situations and they needed to re-post it.

'You have your opinion, I have my opinion, and if we are at an impasse then we have to fix it," Armstrong said.

Parker charged that Armstrong was putting personal history over the town's duty to fill a vacant seat from a field of applicants who applied in the designated time.

Armstrong said she could vote however she wished: 'It's my right and I'm doing what I feel is best for Lakeside."

With no side giving an inch, the seventh seat on the council again remained vacant by the meeting's adjournment.

Viedo said a stalemate wasn't good enough and she hoped the citizens of Lakeside would register their disgust on her recall petition.

Viedo is only trying to recall Allen rather than all three 'no-vote" councilors because Allen has the most time left on her council term. The seats of Armstrong and Eubanks are on the line at the next scheduled election in November 2012.

With recall campaigns costing about $3,500, Viedo also didn't want to cost the city anymore than could be avoided.

'We are a poor community. We are a community of retired people. By the time we get to the ballot there won't be much time for these two (Armstrong and Eubanks) anyway," Viedo said. 'It's better to go after one of them than to try to spread our efforts and going after several."

Once she filed the paperwork, Viedo expected to be collecting signatures by late next week. She needs at least 127 signatures to force a special election that will ask voters whether they want to remove Allen.

She was confident she could reach that 127 threshold after collecting 147 signatures on a separate 'warning" petition presented to the council at the beginning of Thursday's meeting.

That petition was non-binding, but those signers had given their phone numbers and addresses so Viedo could easily contact them in the event she started a recall petition.

'I think people in town are tired of councilors acting like children," she said. 'They would like to see the 'no vote three' grow up."

After the meeting, Allen was contacted by phone. She would only say 'no comment." Asked to what her 'no comment" was in reference, she said, 'Any question you want to ask me."

Armstrong was also contacted. When told about the recall campaign against Allen, she said she was disappointed to hear of any recall because she believed that people invested their trust in their officials at each regular election.

She also feared any campaign will be reciprocated with a recall against Gowan, Parker and Ed Langley. She stressed she wouldn't have any hand in a reciprocal recall campaign, but she knew of people who would jump at the excuse. She didn't think a city like Lakeside -- which receives no funding through property taxes -- could afford the cost of one, let alone multiple, recall campaigns.

Armstrong elaborated on why she felt both Dunn and Warner were poor candidates for Lakeside. She had issues with Dunn because of his involvement in a dispute between the city and a property owner violating the town's sign ordinance. She said Warner had been heavily involved in a dispute over the town's sole liquor license in 2009 and 2010.

In both instances, she felt strongly that Dunn and Warner had acted rashly or not in the best interests of the town.

Previously, Armstrong would not give The World a firm reason why both candidates were unsuitable to join the council.

Eubanks has previously stated that he rejects both candidates because they had acted negatively towards him in council meetings and he saw them adding a similar negative presence to the council.

Allen has consistently declined to give an explanation other than say the candidates are unqualified due to reasons that are her 'private view."

Start a fund for citizens of surrounding communities to donate to. Use the funds to recall every single one of them. "He was negative to me?", "its my personal view?" Are you serious? The current Lakeside Council is behaving like a SNL skit, only much uglier!