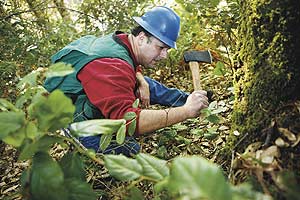 Forester Randy Weise samples an oak tree to asses the damage done by sudden oak death disease, a water mold that spreads via a windborn spore. The disease mainly affects tan oak trees, killing them in about a year, but Oregon State University scientists have shown that it can affect about 100 plant species. 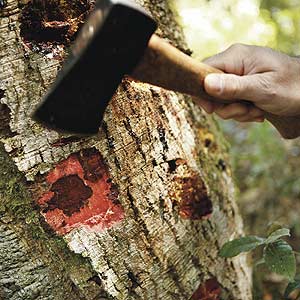 Randy Weise exposes the base of a tan oak tree to reveal the tell-tale symptoms of the sudden oak death disease. This tree is dead and will be felled and burned to inhibit spreading the disease, Weise said. World Photo by Benjamin Brayfield 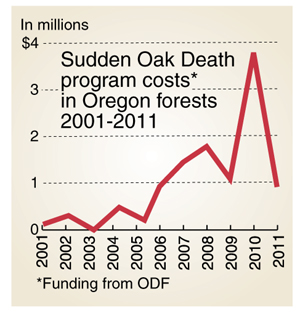 Forester Randy Weise samples an oak tree to asses the damage done by sudden oak death disease, a water mold that spreads via a windborn spore. The disease mainly affects tan oak trees, killing them in about a year, but Oregon State University scientists have shown that it can affect about 100 plant species.

Randy Weise exposes the base of a tan oak tree to reveal the tell-tale symptoms of the sudden oak death disease. This tree is dead and will be felled and burned to inhibit spreading the disease, Weise said. World Photo by Benjamin Brayfield

The disease already was known as a voracious killer of oak trees, but no one had known it could jump to camellias.

Once the disease was lab-confirmed, the U.S. Department of Agriculture temporarily shut down infected garden centers. Monrovia, with its reputation in crisis, spent millions to destroy all of the infected plants.

The outbreak was largely contained, but it's an example of the cat-and-mouse game the government is playing with one of the world's most aggressive plant diseases. Now, after years of isolation in California, sudden oak death is spreading in Southern Oregon.

Pathologists fear what the disease will do to the state's natural flora. Loggers and nursery owners fear red tape and import bans from other countries.

The disease was first detected in Curry County 10 years ago. Despite a multimillion-dollar eradication program, it's moving slowly north toward Coos County. A quarantine zone that once covered nine square miles now spans half of Curry County.

Frank Burris, a watershed management educator for Oregon State University, said it may no longer be a question of whether the disease can be stopped. The question instead is when it will arrive in Coos County.

"The bottom line is, we are losing the battle," Burris said. "The disease keeps moving ahead of us, and we are running out of money to do these tree removals on tree owners' property."

If the disease keeps spreading north - as most experts expect if it's left unchecked - Oregon's $60 billion timber industry could take an expensive hit.

Birth of a killer

Sudden oak death earned its name after swaths of oaks began dying in the central California coast in the 1990s.

Experts were at a loss to pinpoint the cause. Not until 2000 did researchers Matteo Garbelotto and David Rizzo identified the cause: a fungus-like pathogen called Phytophthora ramorum.

Garbelotto, an associate professor at University of California Berkeley, calls it one of the world's most dreaded tree diseases.

"We know it's very adaptable, and that's kind of a concern, because at the time of our discovery we were mostly concerned about oaks," Garbelotto said. "I would say it's one of the most scary pathogens because we can't put in a box."

Typically, an affected oak will be doomed months before it shows outward signs of dying. Once die-back begins, however, the tree's crown and canopy turn brown within a few weeks. In some cases, the entire tree may fall over.

About 16 years after first reports of the disease in California, that state has not undertaken any large-scale eradication program. The disease is now found in 14 California counties.

Rizzo, a professor at UC Davis, said there are no concrete figures about California's infected area, but it's likely several thousand square miles.

What makes the disease so contagious is its versatility. It can spread through 100 plants other than oaks. The list includes camellias, rhododendrons and even Douglas fir.

The pathogen, a water mold, moves between plants on contaminated soil, wind-blown rain or by direct contact with infected leaves.

Most non-oak species suffer leaf blight, stem cankers and tip die-back, but they generally don't die. The danger is that the spreading disease inevitably reaches and devastates oak populations.

The spread does not leave a unbroken wave of destruction, but patches of dead trees. The losses upset the forest eco-system, Garbelotto said.

"You're losing a very significant component of the forest, and we are very concerned, because these trees and oaks are really a major nesting species on the coast."

That is why the tree disease remains the most quarantined in the world. It's also why Oregon spends millions each year to fight the disease before it becomes as pervasive as it is in California.

Federal and state agencies have slowed the disease's spread in Oregon.

Kanaskie, a forest pathologist with the Oregon Department of Forestry, likes to compare Curry County's infection with Humboldt County, Calif. Both regions discovered similar-sized infestations in 2001, but they've had widely different experiences.

Despite foresters' best efforts, however, the borders of Oregon's quarantine zone have been redrawn several times around P. ramorum's northward spread. The disease is predominantly killing tan oaks, the main oak species along the South Coast.

The difficulty for the Forestry Department and other agencies is that they still can't predict how fast and far the disease will travel. Kanaskie calls it "malicious."

"We might find it two miles away from the closest spot. It's capable of moving that far by natural spread."

A 2009 research paper by Oregon State University estimated the disease would arrive in Coos County sometime before 2025. As the economic downturn tightens agency budgets, the infection might arrive sooner rather than later.

This year, because of funding cuts, 500 to 600 acres of quarantined land in Curry County will not be inspected.

While the U.S. Forest Service and the Bureau of Land Management eradicate infected plants on their own lands, Oregon oversees eradication on private and state land.

The state's annual expenditure for finding and fighting the disease is erratic. Last year, the Oregon Department of Forestry's program received a $2.6 million boost from federal stimulus funds. Other years, the Department has run out of cash before the year is out.

This year, after state lawmakers tightened spending, the department has only $924,000 for its control program - the lowest amount in five years.

The cut has changed how the department fights the disease. Normally, it uses aerial photographs to identify infected trees. Then it cuts them down and burns them. Workers also burn any other infected plants and potential host plants within 300 feet.

Now the department is targeting only the outlying sites - like dousing spot fires when controlling a wildfire. Consequently, the disease is intensifying near Curry County's coast. Nevertheless, Kanaskie is confident the disease's northward spread can be slowed.

Curry County itself is largely watching the battle from the sidelines.

Commissioner David Itzen, who is involved in the eradication program, understands the magnitude of P. ramorum. But his county is desperately strapped for cash.

Curry, like Coos and 16 other counties across Oregon, faces major budget shortfalls due to the end of federal timber payments that sustained the counties for decades. Itzen fears Curry County may face insolvency in 18 months, and the county has been unable to attract grants for P. ramorum eradication.

Coos County isn't much better equipped to fight P. ramorum if it arrives.

Both the timber and nursery industry, who have the most to lose from the spread, are worried about the long-term repercussions of that short-term funding gap.

"I think that would be money well-spent because it won't just affect our industry, it affects the timber industry too," said Jerry Simnit, president-elect of the Oregon Association of Nurseries.

Jim Carr, chief forester for Menasha-Campbell Group, is also concerned by the funding cut. He contends spending more money sooner could have stopped the disease from reaching its present scale.

In a testament to the industry's concern, the Oregon Forest Industries Council will ask its members to consider contributing money to P. ramorum's eradication.

Mike Dykzeul, director of forest protection, said who will pay and how much are likely to be contentious questions. Meanwhile, the Oregon Department of Forestry is floating other options for controlling the disease.

OSU's Burris said one proposal is to create a mile-wide buffer, north of the quarantine zone.

The plan would mean destroying hundreds of acres of plants that can spread P. ramorum - creating, in effect, a firebreak against the disease.

While the cost would be massive, the state may have help from a Gold Beach-based biofuel company. Three Dimensional Timberland has offered to pay the state for the downed material.

Garbelotto, who has now studied the disease for over a decade, is unsure whether either option will work.

"I think it's going to be hard to stop it for a couple of reasons. No matter what we do, it's a microbe, it keeps spreading. And, two, it's still present in the nursery business, so one way or another there's a risk it may be introduced further up the West Coast or another part of the country."

He said Oregon policy makers must ask themselves whether the damage caused by sudden oak death justifies the cost of fighting it.

"I still think it's worth slowing down, but it's impossible to really stop it."

In Oregon's South Coast region, tan oak is the main tree affected by Phytophthora ramorum, A…

new site with trees infected by the pathogen Phytophthora ramorum – also known as Sudden Oak Death – has been discovered in Curry County. The new infection site is over six miles north of a quarantine boundary established by state and federal officials to stop the spread of Sudden Oak Death (SOD) infection outside of southwest Oregon.

As far as I'm concerned, if your business unleashes a threat such as this, you should be forced to spend every single penny trying to ensure that the problem you created is eradicated.

Yes, that means that a business should be liquidated and assets sold if they cannot pay enough to clean up the mess. This is costing other businesses a hell of a lot more money than the tiny amount spent to cover up the mistake.