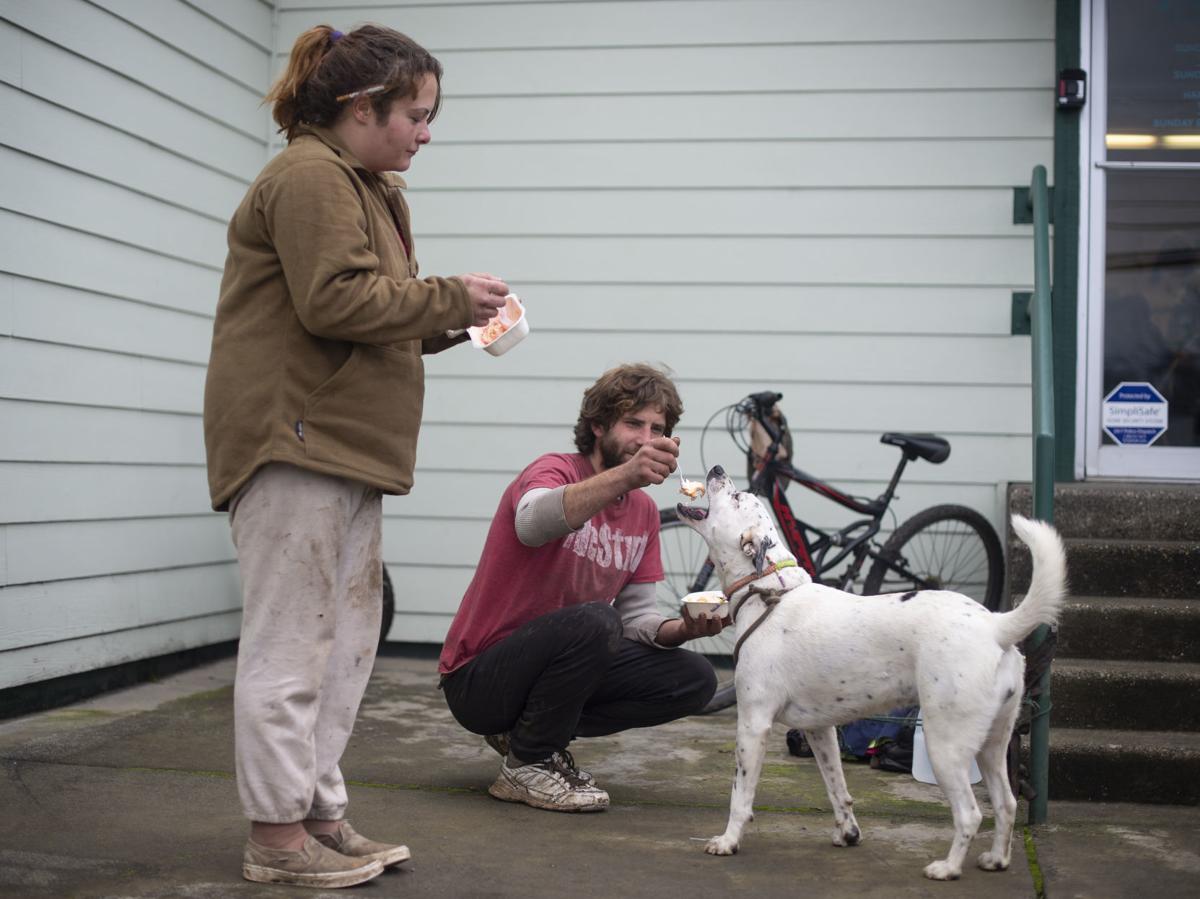 Jeremiah Kidder and Cassandra Frunz feed sherbet to their dog Dot Pig during a free breakfast Saturday, Dec. 28, at The Harbor Assembly of God in Coos Bay. The Harbor offers a free breakfast, sack lunches and other necessities to those in need. 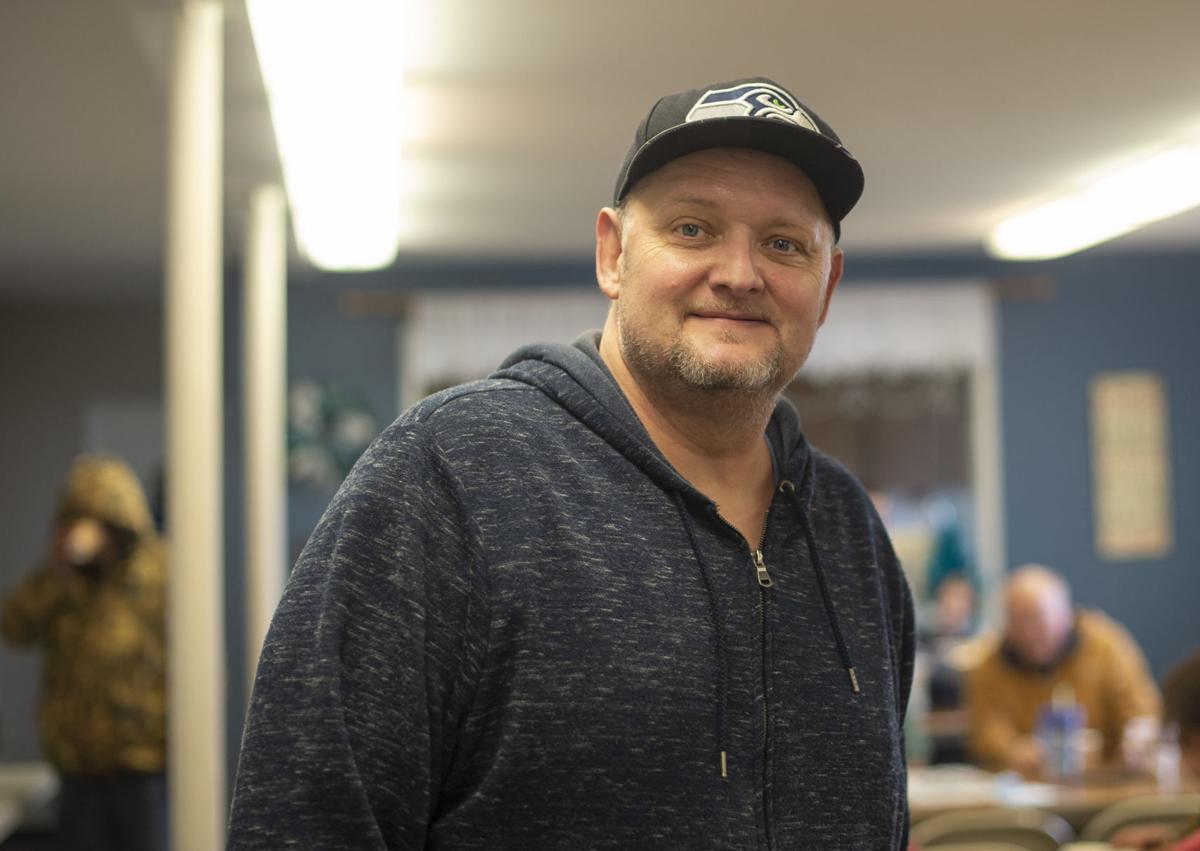 Pastor Matthew McCoy checks in with a patron during a free breakfast Saturday, Dec. 28, at The Harbor Assembly of God in Coos Bay. 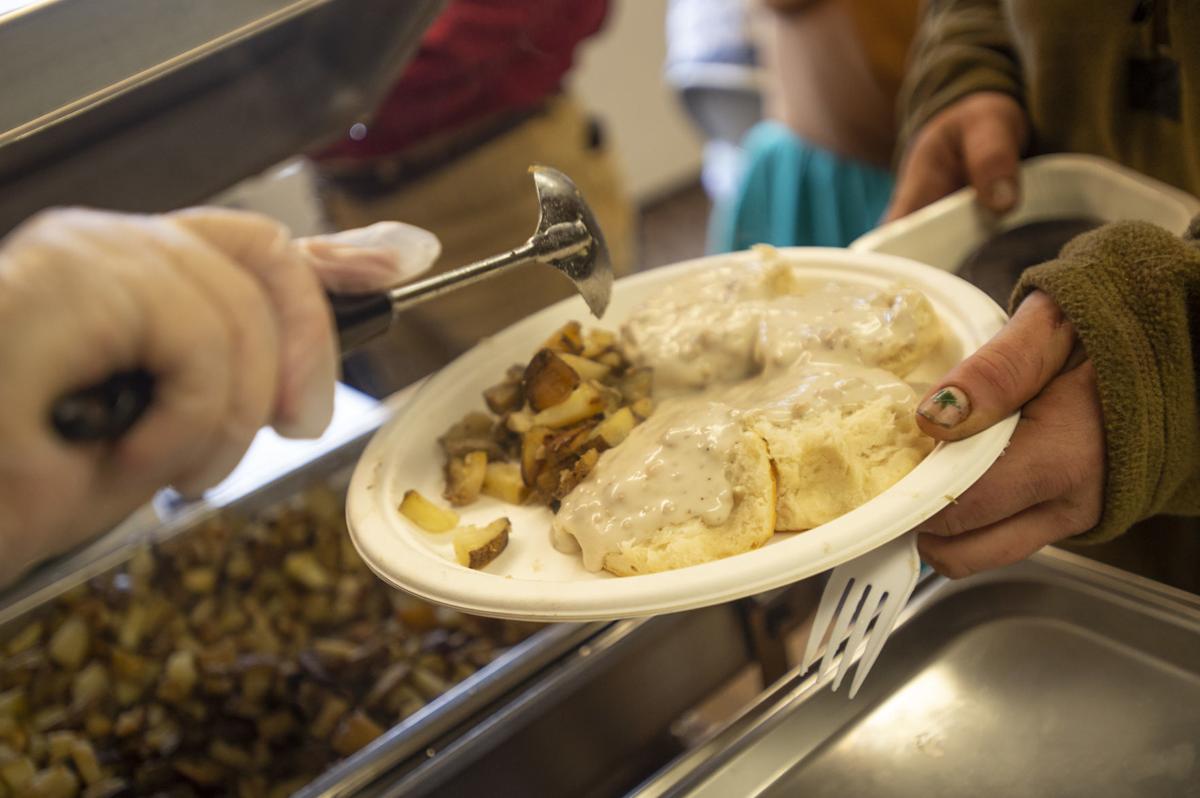 A volunteer loads a patrons plate Saturday, Dec. 28, during a weekly free breakfast at The Harbor Assembly of God in Coos Bay. 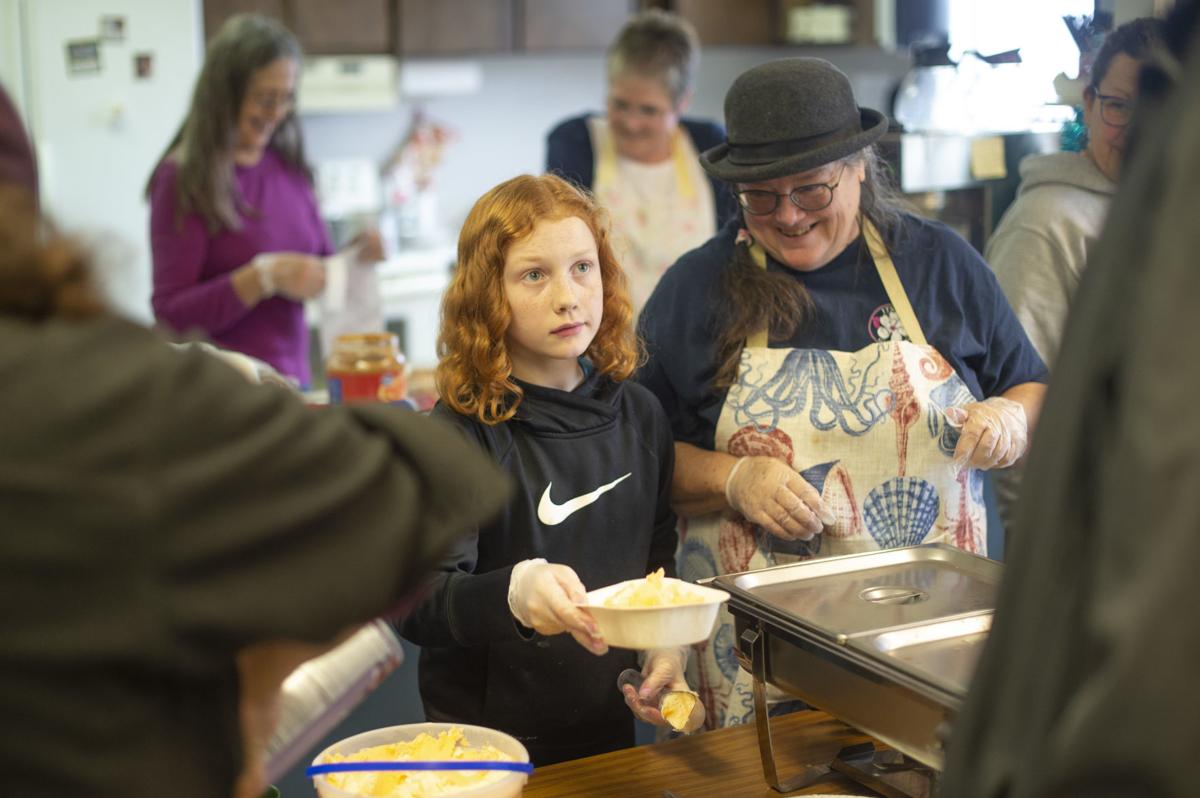 Volunteers serve hot food and dessert during a free breakfast Saturday, Dec. 28, at The Harbor Assembly of God in Coos Bay. 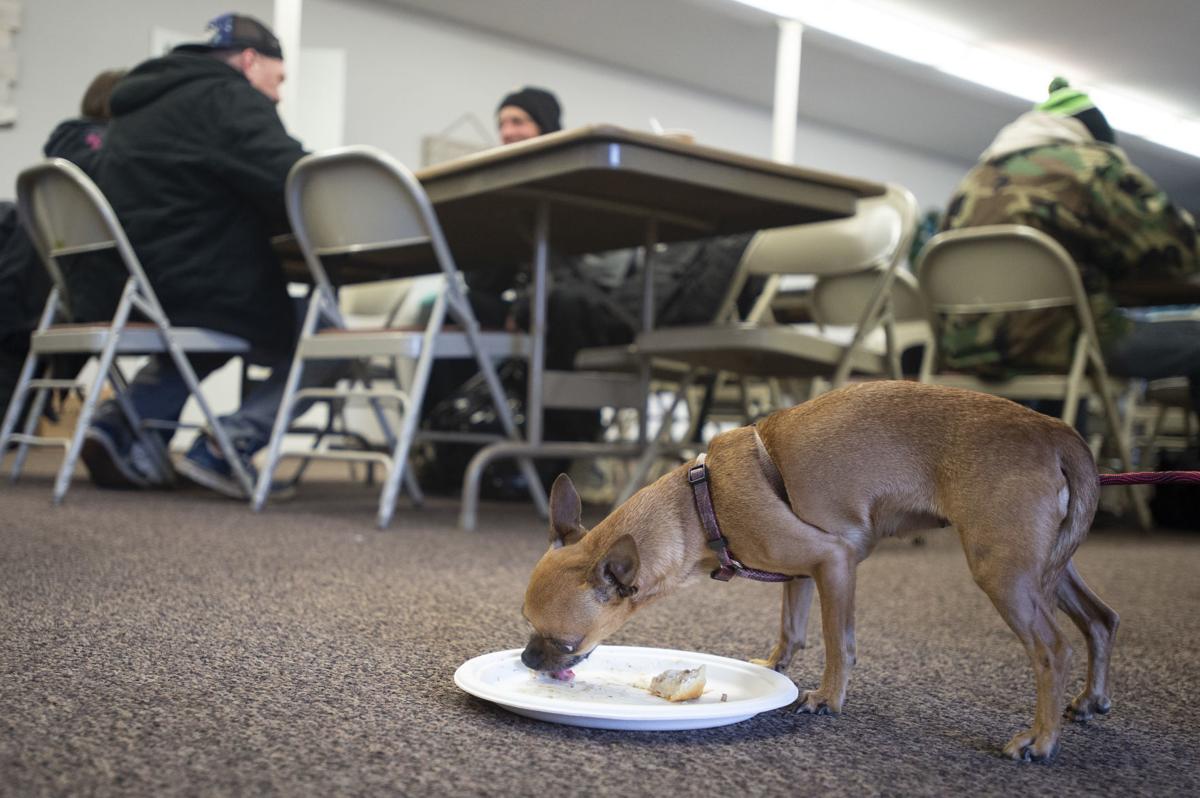 Tinkerbell cleans a plate of biscuits and gravy on Saturday, Dec. 28, during a weekly free breakfast at The Harbor Assembly of God in Coos Bay.

BUNKER HILL — Depending where homeless individuals have camped in Coos Bay, services can be hard to reach. But in one corner of the bay area is a pastor some refer to as the Angel of Bunker Hill who meets homeless where they are and gives them supplies needed to survive.

“On one side of town, the homeless have the Nancy Devereux Center but here in Bunker Hill there isn’t much,” said Matthew McCoy, pastor at the Harbor Assembly of God.

A volunteer loads a patrons plate Saturday, Dec. 28, during a weekly free breakfast at The Harbor Assembly of God in Coos Bay.

A year ago, McCoy felt the need to meet the area homeless where they were because he understood the difficulty of living on the streets. Before he became a pastor seven years prior, McCoy was homeless in Seattle, Wash. There, he found shelter at the Union Gospel Mission where he benefited from a program that brought supplies to people where they managed to find shelter.

When McCoy became a priest and was located to Coos Bay, “God laid it on my heart to help the homeless,” he said.

“I got the idea for our Love in Our Community with the Love of Christ program from the Union Gospel Mission,” he said.

The LOC program McCoy established in Bunker Hill takes necessary supplies such as blankets, hand warmers, food and water to local homeless. Sometimes he goes out on what he call "Search and Rescue missions" once a month or more, depending on the weather.

Tinkerbell cleans a plate of biscuits and gravy on Saturday, Dec. 28, during a weekly free breakfast at The Harbor Assembly of God in Coos Bay.

“In Seattle, every year people freeze to death on the streets so this idea to give them what they need so they can survive isn’t original to me,” he said. “I thought it would be a good thing to start here in Bunker Hill because the homeless population is growing here.”

When LOC began, McCoy and church members who volunteered took 20 care packages out to local homeless. Two months ago when McCoy went on a SAR mission for the program, he had over 50 care packages and found that wasn’t enough.

“Those care packages consist of lunch, stocking caps, gloves, rain ponchos, basically anything to fill their bellies, keep them warm or keep them dry,” he said. “It covers their basic needs.”

However, McCoy said that the growth in known homeless camps in Bunker Hill may be that he just knows where to find them now. After starting LOC, McCoy went out and met with individuals at the Devereux Center to get to know them, understand their needs, and find out where they live so he can meet them when the weather gets bad and they need supplies most.

“I’ve seen when he comes here,” said Tara Johnson, executive director at the Devereux Center. “He works very hard to build a rapport with the people that come here as clients, which fosters a sense of trust and connection. As he builds that relationship with them, they are most willing to share what their needs are and where they’re staying …. Here, clients come to us, but sometimes they can’t make it and so the fact that he can go to them is a whole different aspect in serving a vulnerable population.”

Pastor Matthew McCoy checks in with a patron during a free breakfast Saturday, Dec. 28, at The Harbor Assembly of God in Coos Bay.

When McCoy visits with the homeless at the Devereux Center, he explained that another goal is talk with them and make them feel like people again.

“I think one of the most important parts is that people see them,” he said. “They aren’t charity cases. They are people.”

Not only that, but he has learned what they need so “we’re not just throwing stuff at them” or giving items that are useless to them.

When McCoy has visited the camps, he described some as being very organized by groups of homeless who work together like a community and keep it clean, while others are not run like that.

“Some people also like to keep their places secret so no one kicks them out, so I don’t know where everyone stays,” he said.

The LOC program doesn’t just reach out to local homeless. McCoy said it also serves locals in need and that the church’s outreach program also donates to local fire departments, schools and the Pregnancy Resource Center. In addition, McCoy also goes down to Ocean Ridge Assisted Living once a month to visit with them.

Jeremiah Kidder and Cassandra Frunz feed sherbet to their dog Dot Pig during a free breakfast Saturday, Dec. 28, at The Harbor Assembly of God…

“Our elderly are often dropped off and forgotten,” he said. “I have plans on starting an outreach just for them to show them that we still see and appreciate them.”

In the meantime, he described the LOC program as still being in its infancy.

“The LOC is all about spreading the love of Christ,” he said. “And it comes down to the fact that a lot of people won’t hear what I have to say if their bellies are empty.”

During the week beginning Jan. 6, Coos Bay-North Bend Water Board crews will begin routine maintenance flushing of water lines within its distribution system in Coos Bay.