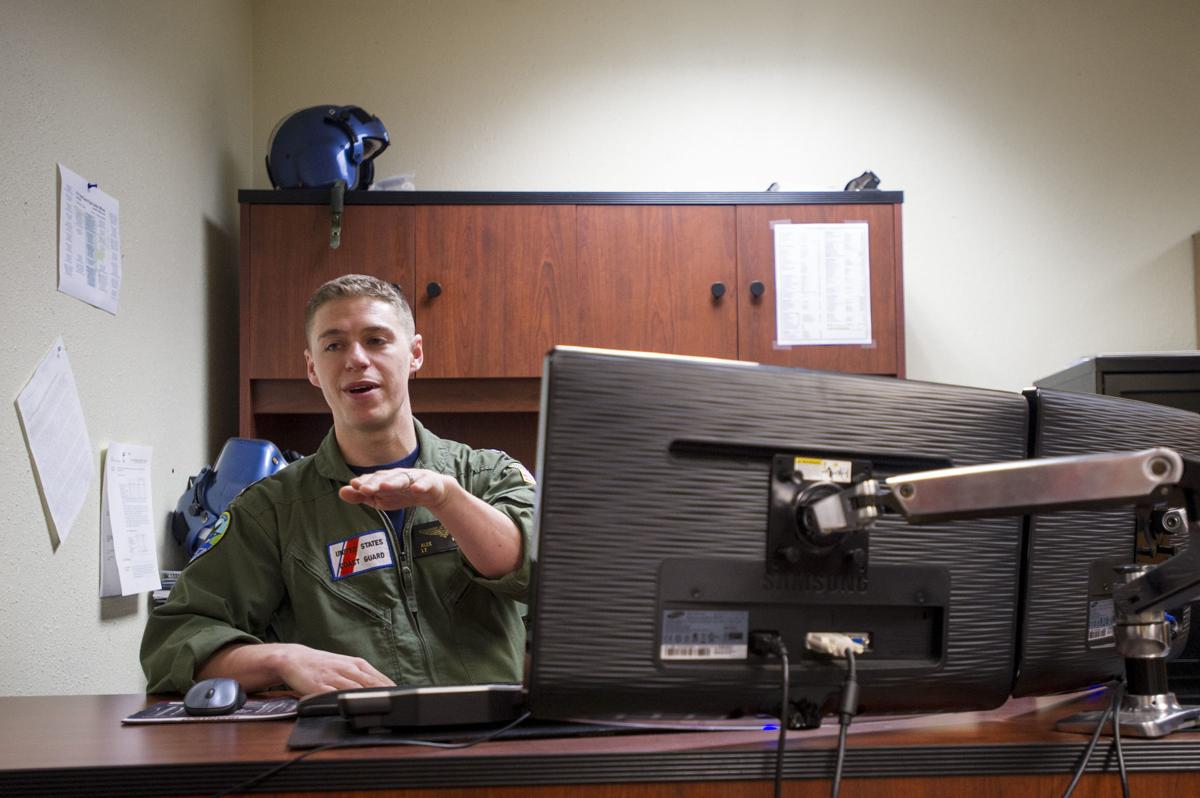 Lt. Alex Webber tells the story Thursday of his first helicopter rescue as a pilot in his office at the U.S. Coast Guard Air Station North Bend. 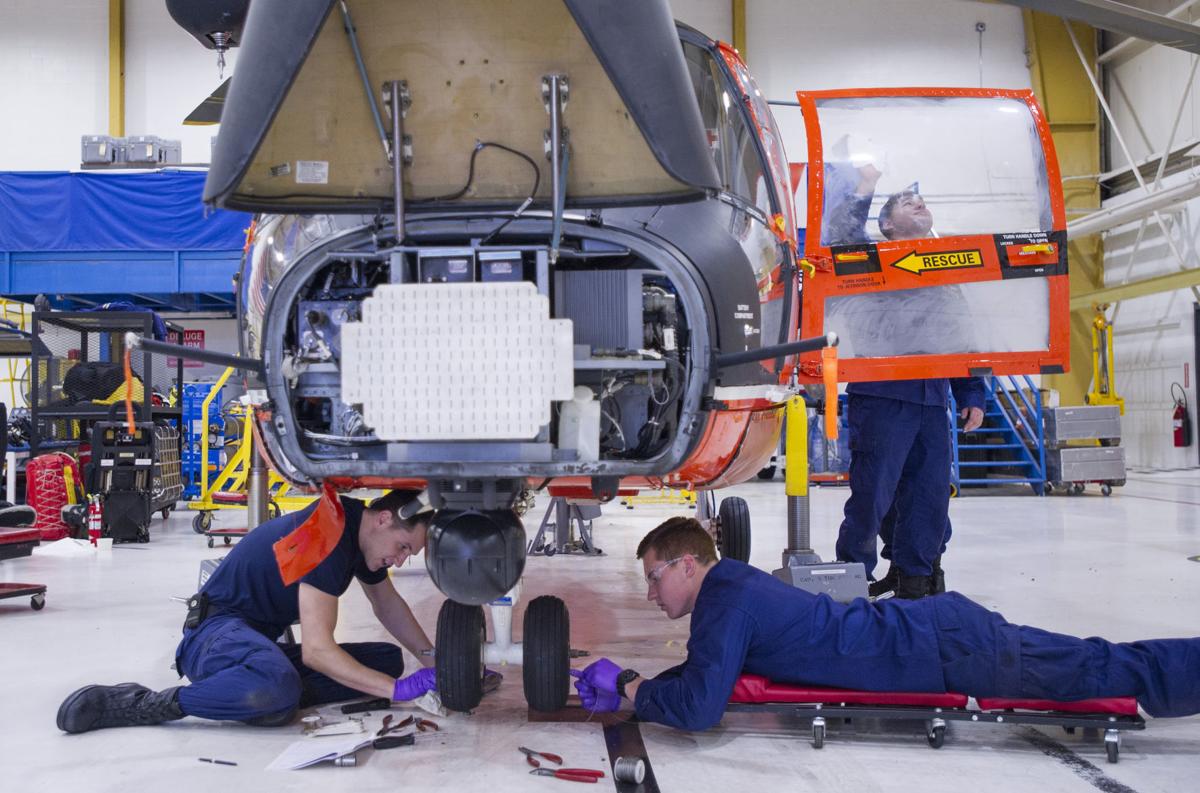 Coast Guardsman perform routine cleaning and maintenance on one of the helicoptersThursday at the U.S. Coast Guard Air Station North Bend. 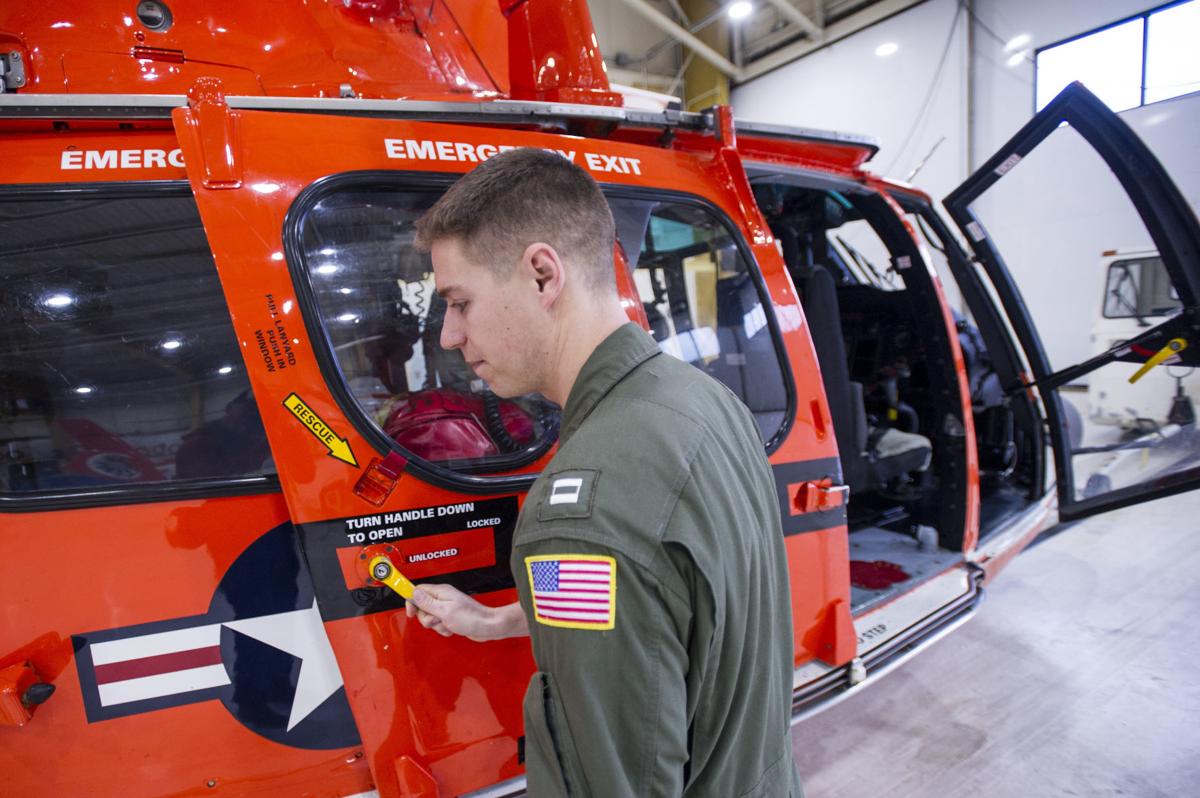 Lt. Alex Webber pulls open a door on a helicopter he pilots at the U.S. Coast Guard Air Station North Bend on Thursday. Crews at the station keep two aircraft near the hangar doors that can be airborne in as fast as 20 minutes. . 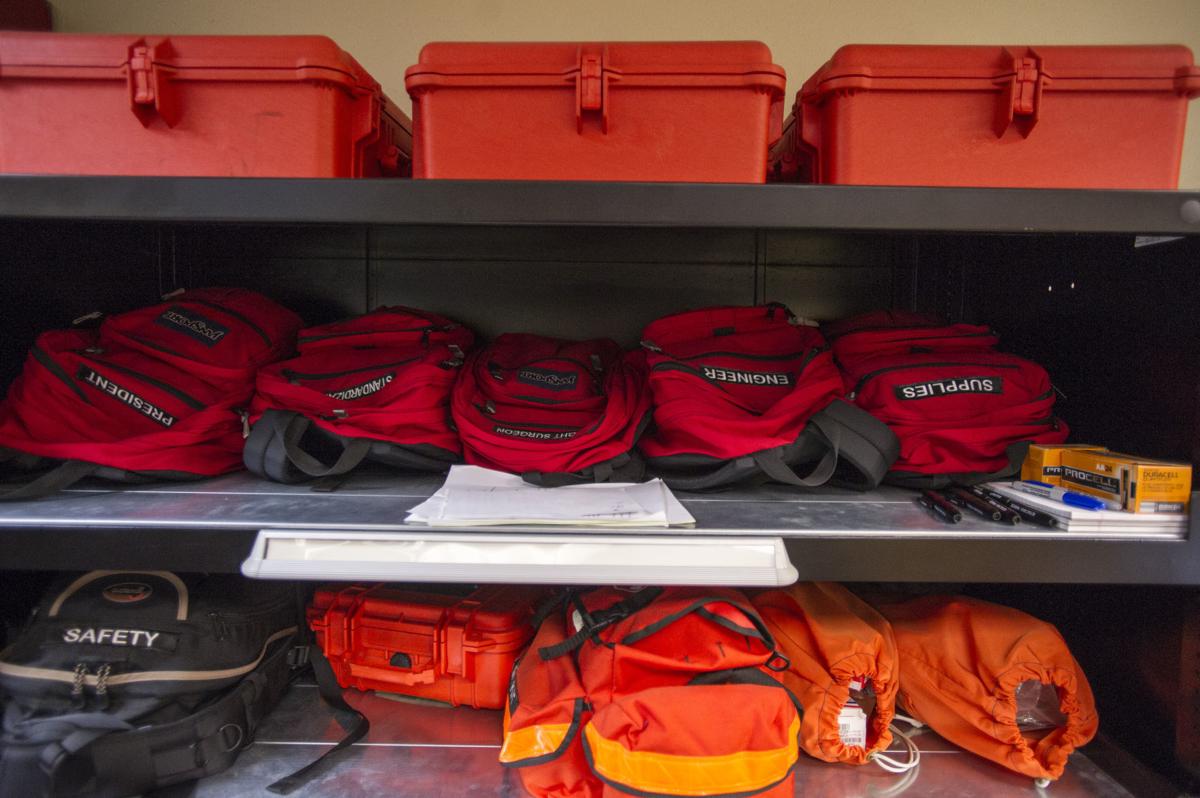 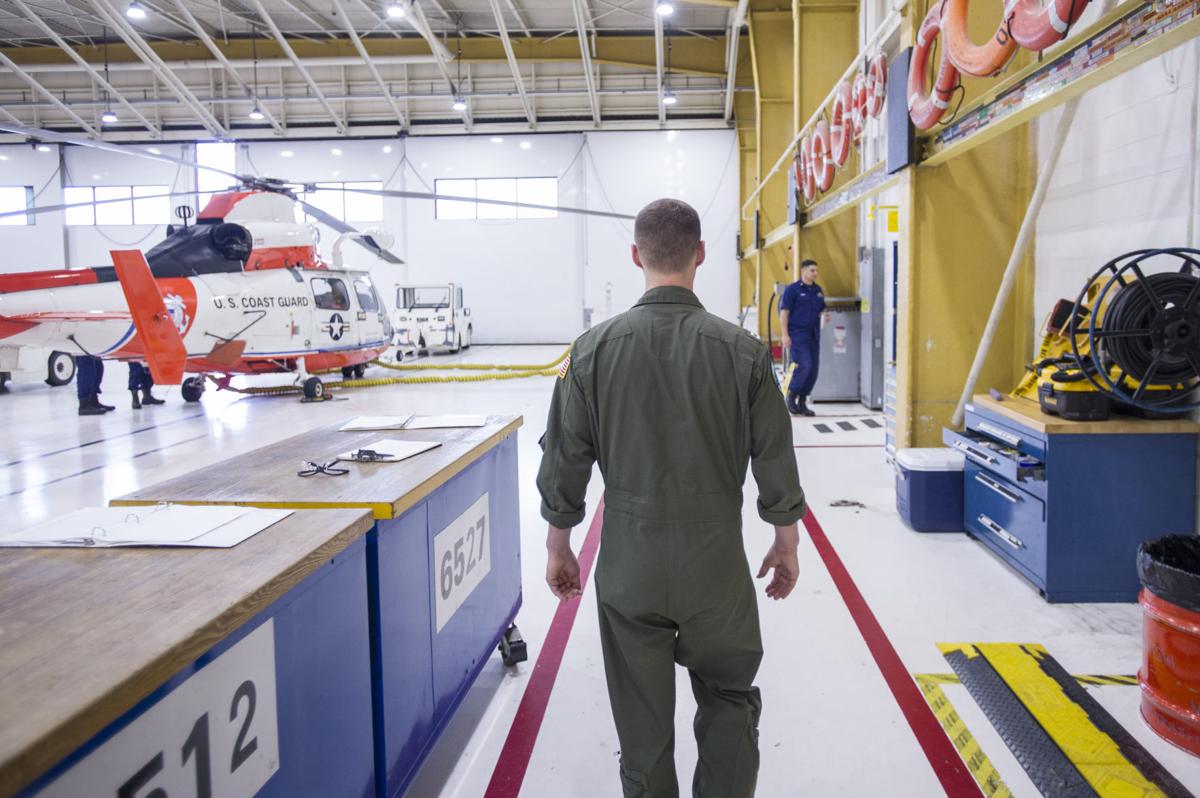 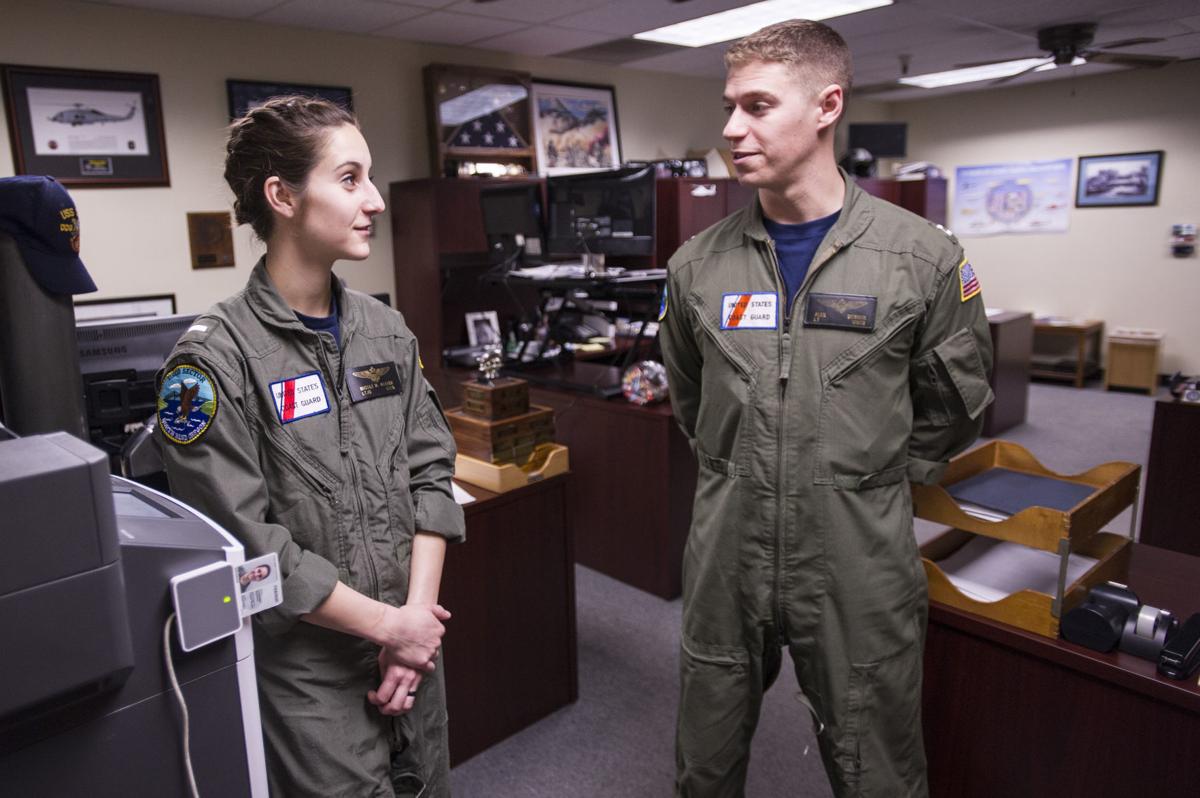 Lt. Alex Webber tells the story Thursday of his first helicopter rescue as a pilot in his office at the U.S. Coast Guard Air Station North Bend.

Lt. Alex Webber pulls open a door on a helicopter he pilots at the U.S. Coast Guard Air Station North Bend on Thursday. Crews at the station keep two aircraft near the hangar doors that can be airborne in as fast as 20 minutes. .

NORTH BEND — Lt. Alex Webber knew signing up to be a helicopter pilot would have its dangerous calls, but his skills were put to the test when he was transferred to the Oregon coast.

He and his crew had just finished responding to a grounded vessel call and were headed up to the air station in Newport when halfway there were diverted to save a woman stranded on a cliff.

Coast Guardsman perform routine cleaning and maintenance on one of the helicoptersThursday at the U.S. Coast Guard Air Station North Bend.

The case made news when it happened back in August of 2017, but for Webber who was fresh out of his previous station in New Jersey, it was a jarring introduction to brand new terrain.

As he recalled, the wind was moving at 40 knots down a 200 foot cliff.

“We train for cliffs in our program, but I’d only done it once and on a benign slope,” Webber said. “The cliff we hoisted her from was sheer and on my first day on the Oregon coast, it was a tough one.”

It was just one rescue among many for Webber and to better understand the work behind what it takes to be a helicopter pilot in the U.S. Coast Guard, The World sat down with him to capture what an average day looks like.

Waiting for the alarm

At 8 a.m. every day, Air Station North Bend has its morning briefing for everyone working that day. But for Webber, he arrives on base at 7:40 a.m. to go over information first.

“The brief has everyone, but pilots get together to receive the situation report, status reports, navigation for the area, and a lot of the pilots have a chance to see each other before dispersing to our own offices,” Webber said.

Until the alarm goes off, calling all on active duty to respond, they keep themselves busy with jobs that keep the unit operating. For Webber, he is not just a helicopter pilot but the safety department head, as well as the flight safety officer.

He spends most of his day in a small office with two desks, sharing space with the ground safety officer. Against the far wall, packed into tight shelves, are mishap response kits.

“One of the biggest jobs is, heaven forbid, something goes wrong with an aircraft and it crashes,” Webber said. “We’re part of the initial response.”

Though a helicopter hasn’t crashed at Air Station North Bend in two decades, Webber pointed at the equipment and explained what he would do if the worse-case-scenario happened.

“We would go out to secure the scene and preserve the evidence to figure out what caused the crash,” he said. “The gear here is to keep evidence safe against the weather and onlookers. The Coast Guard is fortunate to not have any accidents like these in the last few years, so we have a good safety record. You never know what is going to occur, so part of our job is to plan for the best case scenario.”

Webber chose the flight safety officer path, in addition to his pilot duties, because working to prevent mishaps and create a safe environment for other pilots interested him.

But it wasn’t a path he could just step into. To prepare for this role, he attended the U.S. Navy’s Safety Officer School in Pensacola, Florida alongside members from the Navy, Marine Corps, and Department of Defense branches.

“Our job is inherently risky,” Webber said. “In the safety office, we educate and come up with ways to mitigate risks we encounter and learn from things that happen while flying.”

In fact, he held the station’s annual safety stand-up training on Wednesday, Jan 9.

“We try to have a couple events annually, as well as on an individual basis by going around to talk with different shops,” he said. “This training was a refresher, a full day of safety talk to help everyone remember these things for the New Year.”

When a pilot is on duty, their shift is 24-hours straight.

According to Webber, duty begins at Air Station North Bend at 1600 hours, or 4 p.m. They don’t go home until 1600 the following day.

“You come into the command center and get a report on what’s going on in the area as far as weather conditions, if anything happened in the last 24-hours and if anything is ongoing,” Webber said. “Then you brief with your crew.”

A crew brief puts everyone on the same page. The crew talks about planning, events, communication and environment.

“If there is a fog rolling in at 10 p.m., and the alarm goes off, we know what to expect,” he said. “Then everyone goes their own way and pilots do their collateral duty, which is the safety job for me even though my primary job is as an aviator. And then we wait for the alarm to go off.”

Webber walked into the hangar where the Coast Guard helicopters sat, dry from the rain that poured just outside the partly opened hangar doors. As he stepped into the hangar, rock music echoed against the walls as a group of Coast Guardsmen worked on one of the choppers. Some waxed its sides, while others checked its parts to make sure nothing was broken that they didn’t know about.

“We have aircraft in various stages of maintenance,” Webber said over the music and rain. “This helicopter is having routine maintenance, like an oil change in a car.”

If a call is made, response time can be as fast as 20 minutes. Webber said if an alarm goes off, members rush to open the hangar doors and pull a helicopter onto the ramp while pilots get changed into dry suits and get as much information before leaving as possible.

“Some cases require more planning,” he said. “If you have low ceilings and poor weather, we’re going to analyze the conditions longer to make sure we’re safe to enter them. In the winter you get below freezing layers, so we make sure we won’t ice our helicopter up. Usually we have a quick response.”

Most of the gear is already with the helicopter so the crew doesn’t have to worry about grabbing it as they go. Already stored in a compartment on the side is an EMT kit.

If more than the standard equipment is needed, everything else is on the hangar walls ready to be grabbed and loaded.

“We can bring a litter, pumps, and mass casualty rafts,” Webber said. “We have other gear for inland search and rescue as well, which a lot of people don’t realize we do.”

In fact, Webber said the station has answered a number of calls from loggers requiring their assistance.

“Logging is dangerous and sometimes civilian helicopters can’t get to them,” he said.

About two weeks ago he went on a logger case where a man was injured and the Coquille Fire and Rescue went out but realized they needed an air assist.

“We flew out, located him and landed on a logging road,” he said. “We dropped him off at a Eugene hospital. It is normal in areas like this for us to do inland calls like that because there isn’t a lot of other aviation assets.”

But Webber’s first call was to serve. As he described it, growing up boating in Massachusetts with his grandparents meant lots of time sailing on Cape Cod, going out to sea and traveling up the coast of Maine.

“I got my passion for the ocean through them and always had an inner desire to serve the country,” he said. “I always thought I could go out to sea on a ship, but aviation caught my interest.”

When he came out of flight school, he became a co-pilot and had to progress through the syllabus at his unit where he learned to hoist.

“You already knew the aircrafts and systems, but not the fundamentals to execute a hoist,” he said. “You progress from there to first pilot, then to advanced search and rescue where you can execute search and rescue cases as the person in charge of the aircraft. From there, you become aircraft commander.”

But an aspect of Webber’s day is different than the other pilots at Air Station North Bend. As he moved through the station and rounded a corner, he found his wife standing at a copy machine, also a pilot.

“We aren’t allowed to fly together, but are fortunately stationed at the same place,” he said. “Some days we flip-flop duties and don’t see each other for a few days, but the unit works well with our schedules.”

The job is hard on couples, which is underlined by not having seen each other for six months last year when he was deployed in the Pacific.

“It was a busy year, but we understand each other’s jobs,” he said.

“There’s no wondering what went on,” she said. “We know what a flight was like. We know the ups and downs of the position.”

Lt. Webber added that it also helps that the Coast Guard works with couples to be stationed together because it wants members happy.

As for his average day, he walked back to his office, the station quiet.

“Usually calls come in waves,” he said. “In the summer, tourists are on the coast and unaware of the dangers of the sea like sneaker waves and cliffs and get into trouble. This time of year we get a lot of the fishing fleet, but you never know exactly what you’re going to get when you go on duty.”

Though the day was calm, it marked Day 20 of the government shutdown, leaving 800,000 government employees unpaid, including the U.S. Coast Guard.

COOS BAY — Clark Walworth, the communications director of the Coquille Indian Tribe, has been named the 2019 President of the Bay Area Chamber…