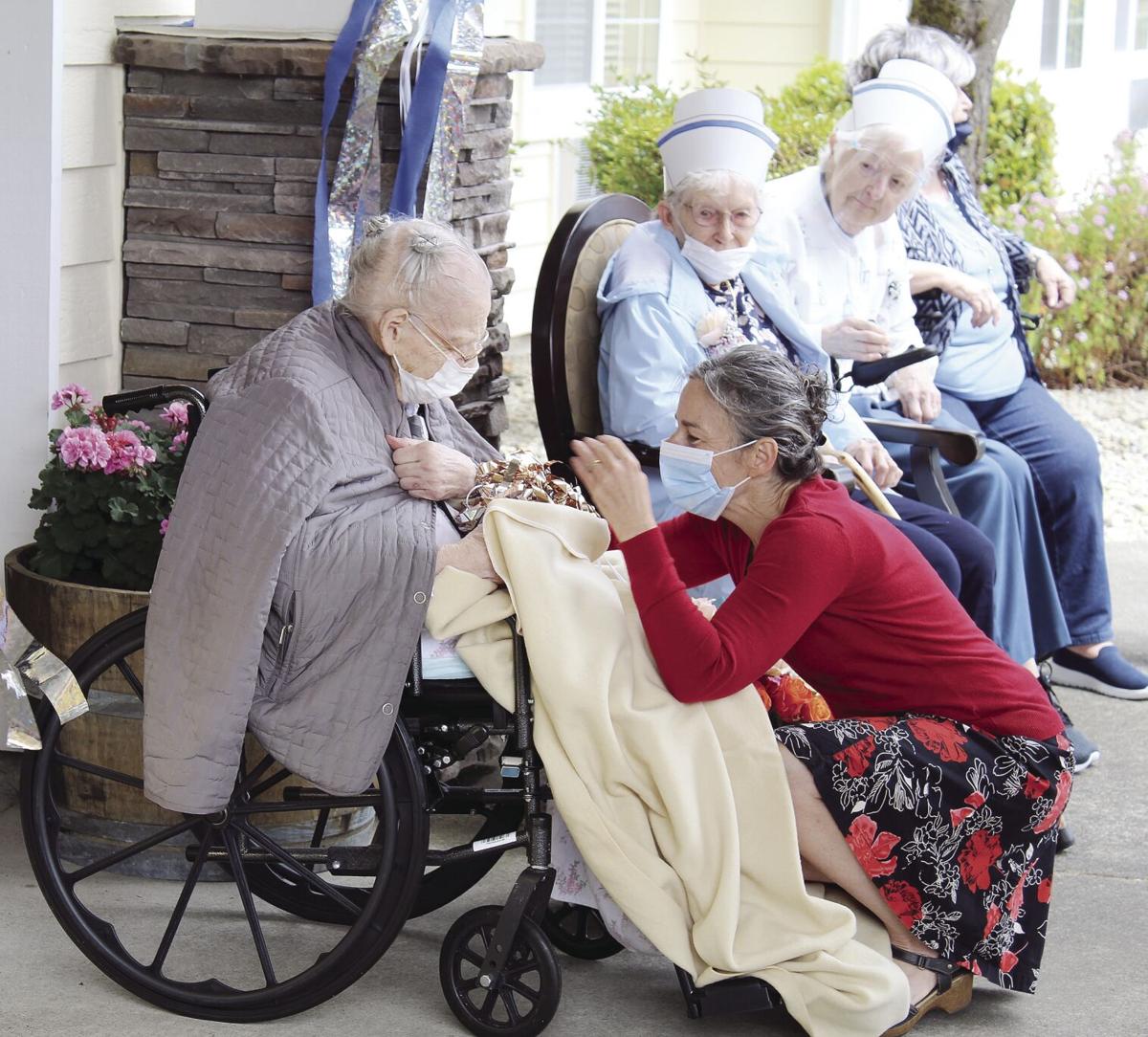 Bertha Sharpe is greeted by friends while celebrating her 100th birthday. 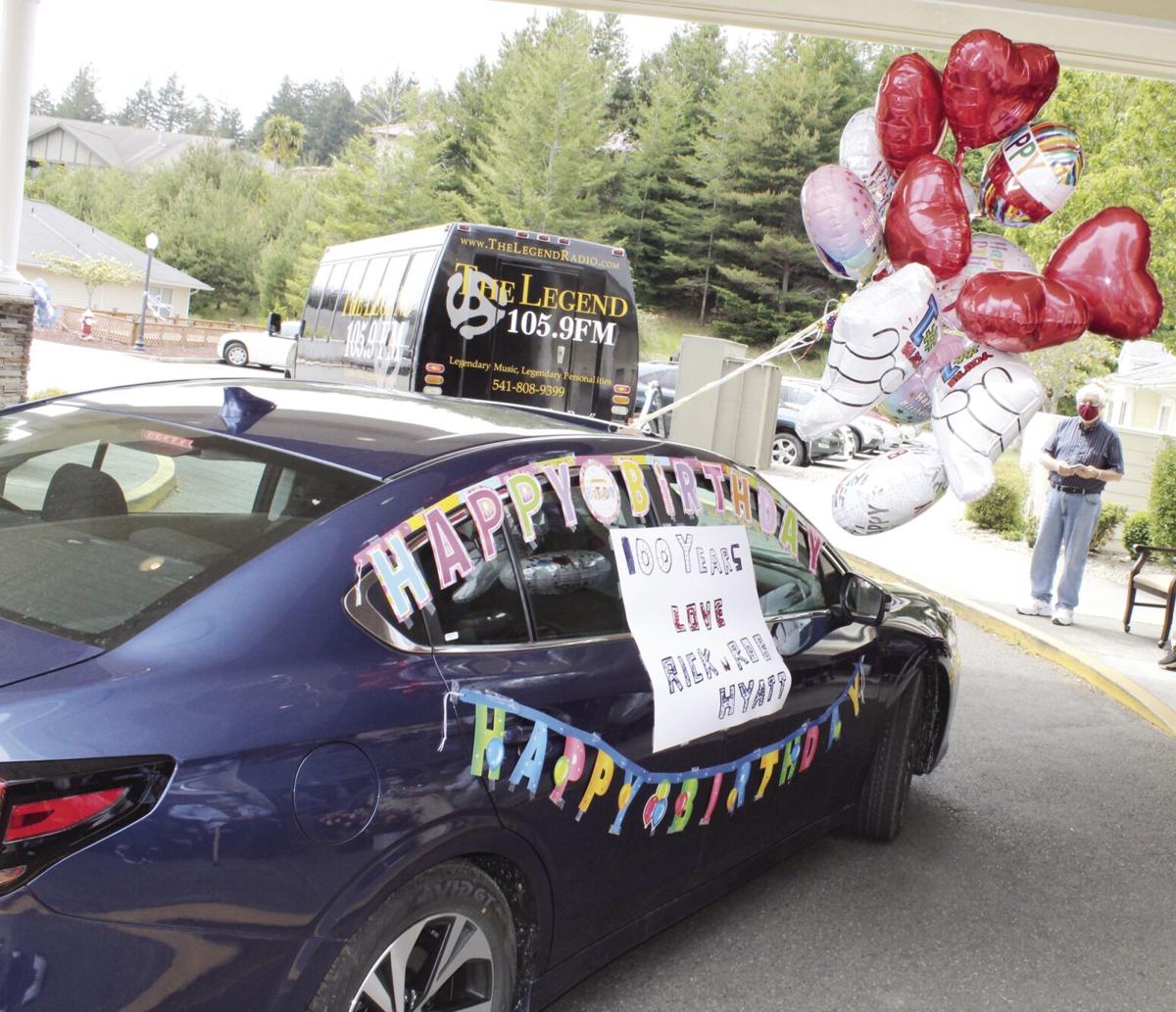 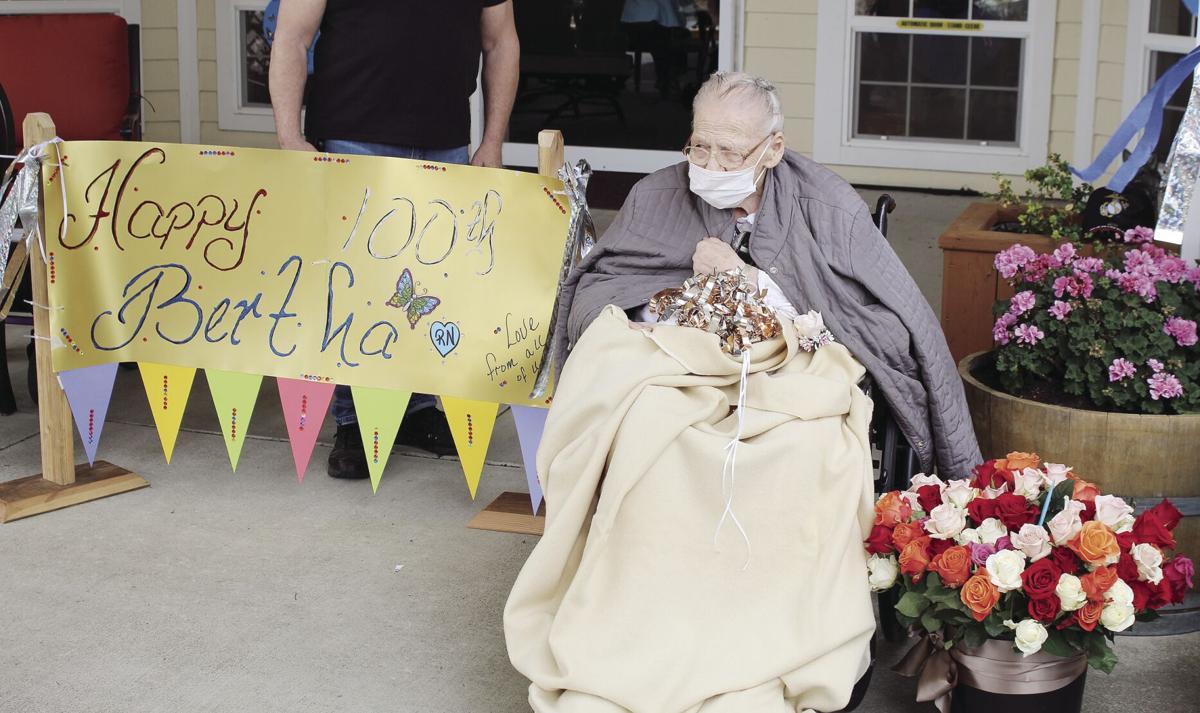 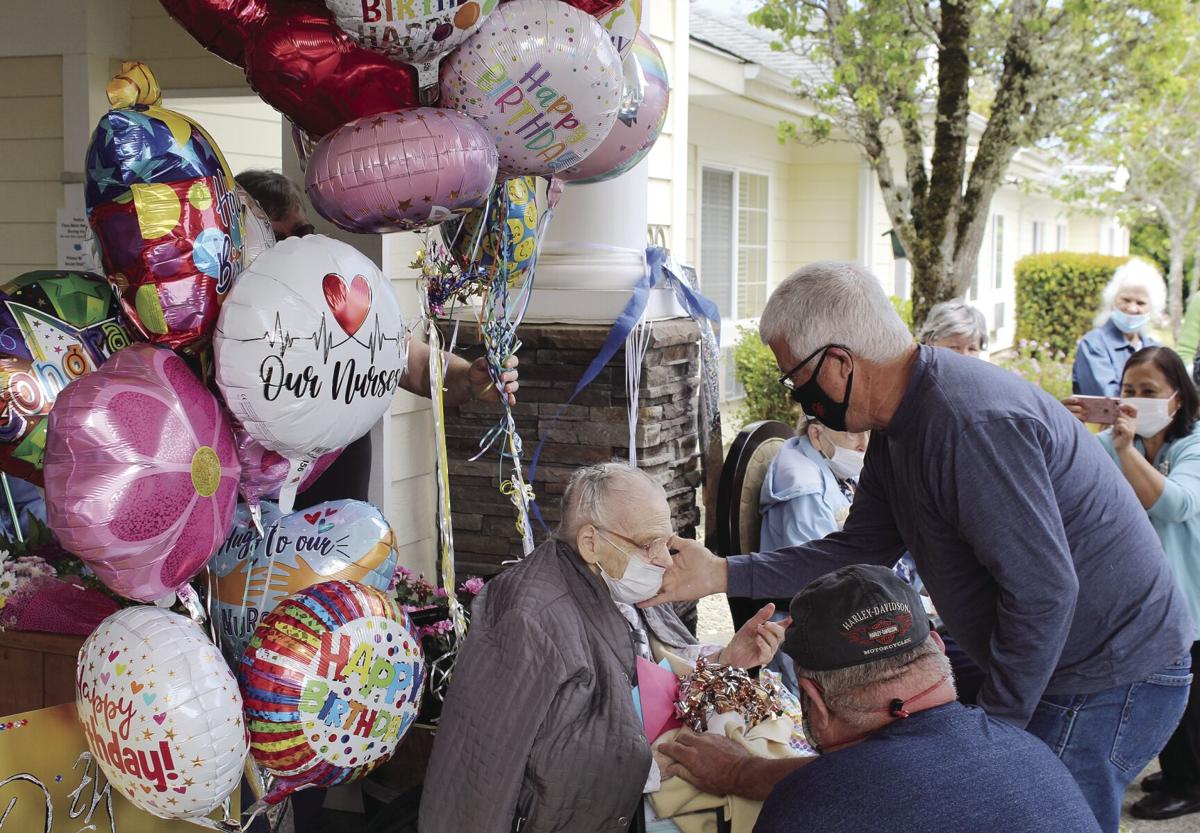 Bertha Sharpe greets two of her nephews who came down from Arizona to celebrate her birthday. 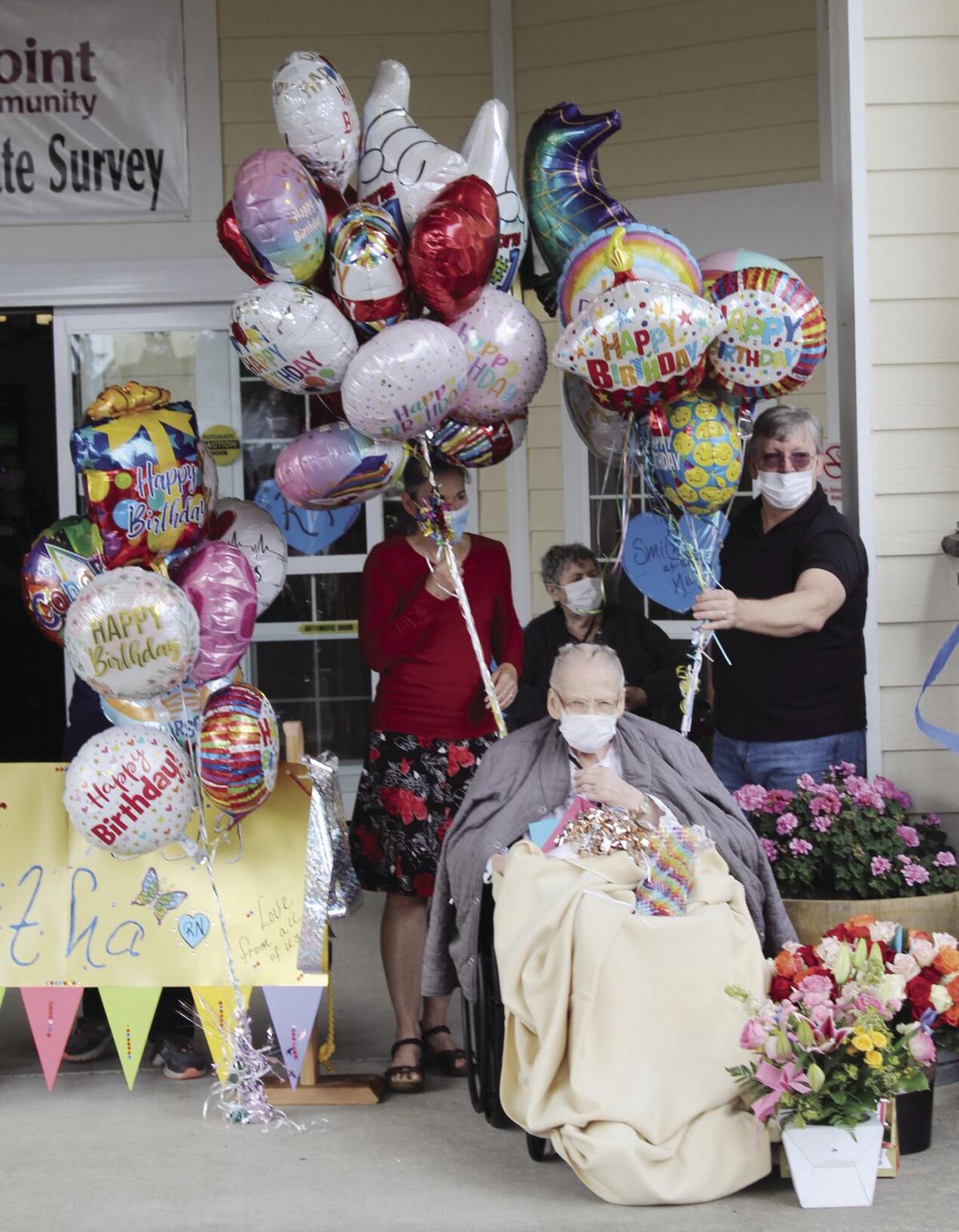 Bertha Sharpe is greeted by friends while celebrating her 100th birthday.

Bertha Sharpe greets two of her nephews who came down from Arizona to celebrate her birthday.

In her 100 years on Earth, Bertha Sharpe has been known a lot of ways – nurse, friend, wife, aunt, sister and faithful church member.

And those who know her best admit while she excelled at all of those, she did it her way. And sometimes that meant being stubborn.

So, those who knew her best were not surprised Wednesday when Sharpe almost chose to stay away from her own party – her 100th birthday party.

But with help from the staff at Inland Point Assisted Living, Sharpe finally came out and watched as friends and family celebrated her biggest birthday to date.

While COVID restrictions limited the interaction, it didn’t stop the celebration and people took part in a drive-by birthday party, stopping just long enough to say “happy birthday” while dropping off balloons, flowers and gifts.

Sharpe was born May 12, 1921, the youngest of five siblings. She grew up in Eatonville, Wash., where she was active in her church, and enjoyed gardening, raising chickens, milking cows and pitching hay.

On Wednesday, she said she became a Christian at age 12, and has never wavered in her faith. Many of the friends who celebrated her birthday knew Sharpe from her many years in her church.

In World War II, Sharpe worked in a sawmill until the men returned and needed jobs. She then went to school in become a nurse, earning her RN at Tacoma General Hospital. While working at the hospital, she saw an ad looking for a nurse at the Weyerhauser saw mill in North Bend, and she jumped at the opportunity. She worked at Weyerhauser for more than 24 years before retiring at age 62.

At the time, Weyerhauser gave Sharpe a cash settlement and agreed to pay her medical insurance for her life, little knowing how long that would be.

Sharpe married her husband Cliff in this area, and they were married for 30 years until Cliff died. Despite being alone, she was fiercely independent, maintaining her driver’s license until she was in her mid 90s, and living alone in her home until she was 97.

Her niece, Ruth Spencer, attended the birthday celebration, and she said although Sharpe’s body has given way some in recent years, her mind has always been perfect. To explain, she told a story about Sharpe interviewing a year ago to get into Inland Pointe. When the nurse asked her where she was, a normal question to determine someone’s cognitive ability, Sharpe was quiet for a lot time. She finally looked up, and said, “Well, I don’t know. Where exactly is the dividing line between Coos Bay and North Bend.”

Spencer said she talks to her aunt Bertha once a week and has done so for 10 years. As far as Sharpe’s secret to living so long. Mostly living right and exercising regularly.

“I don’t know that she has any secrets,” Spencer said. “She’s always been careful about what she eats. She really was active in the Dahlia Club. I think that’s one thing that kept her young all these years was raising her garden.”

While Sharpe had a lot of greetings Wednesday, a few really stood out. In addition to seeing Spencer and great-niece Serena Brison, she also got a surprise visit from two nephews who made the trip from Arizona just to say happy birthday.