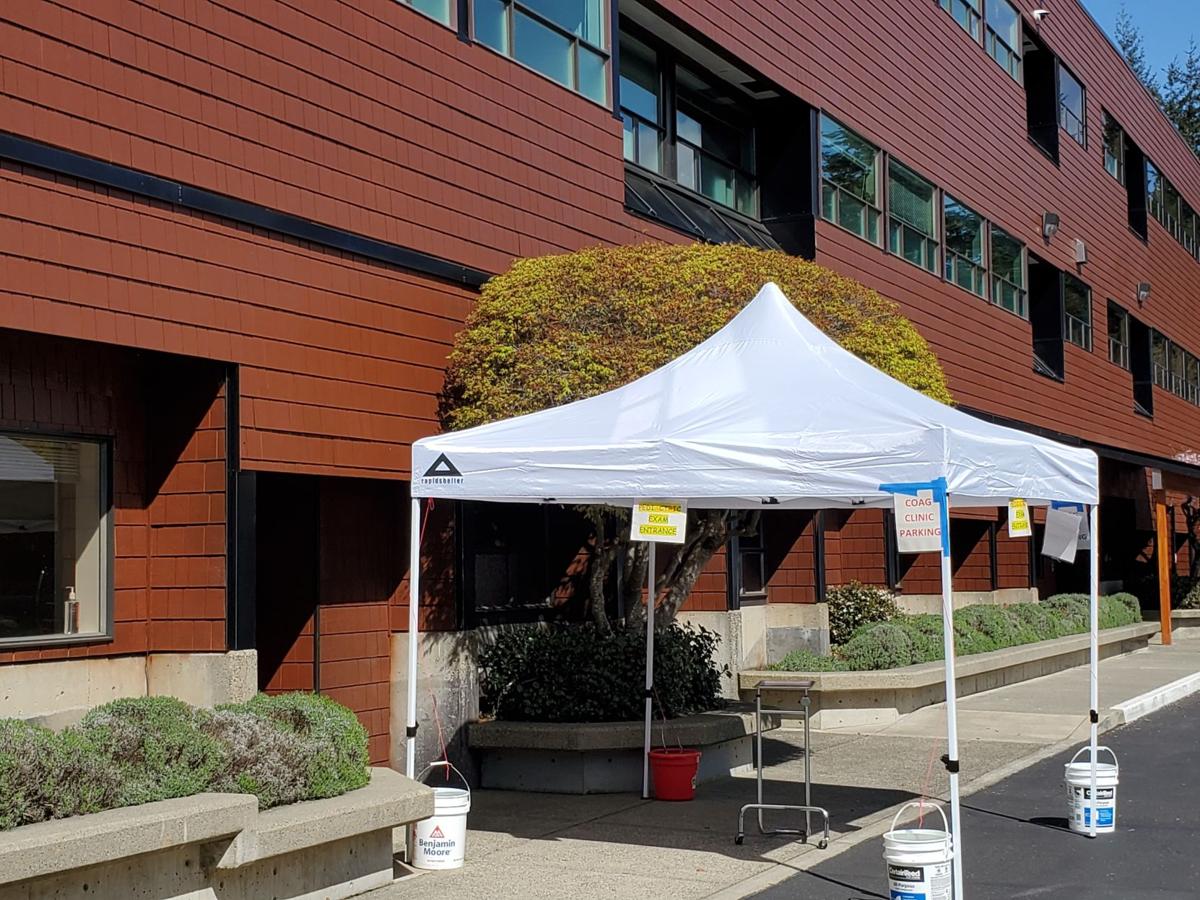 The North Bend Medical Center has set up a tent for patients who need lab work done, as well as a tent for COVID-19. Both tents are accessed externally rather than through the building. 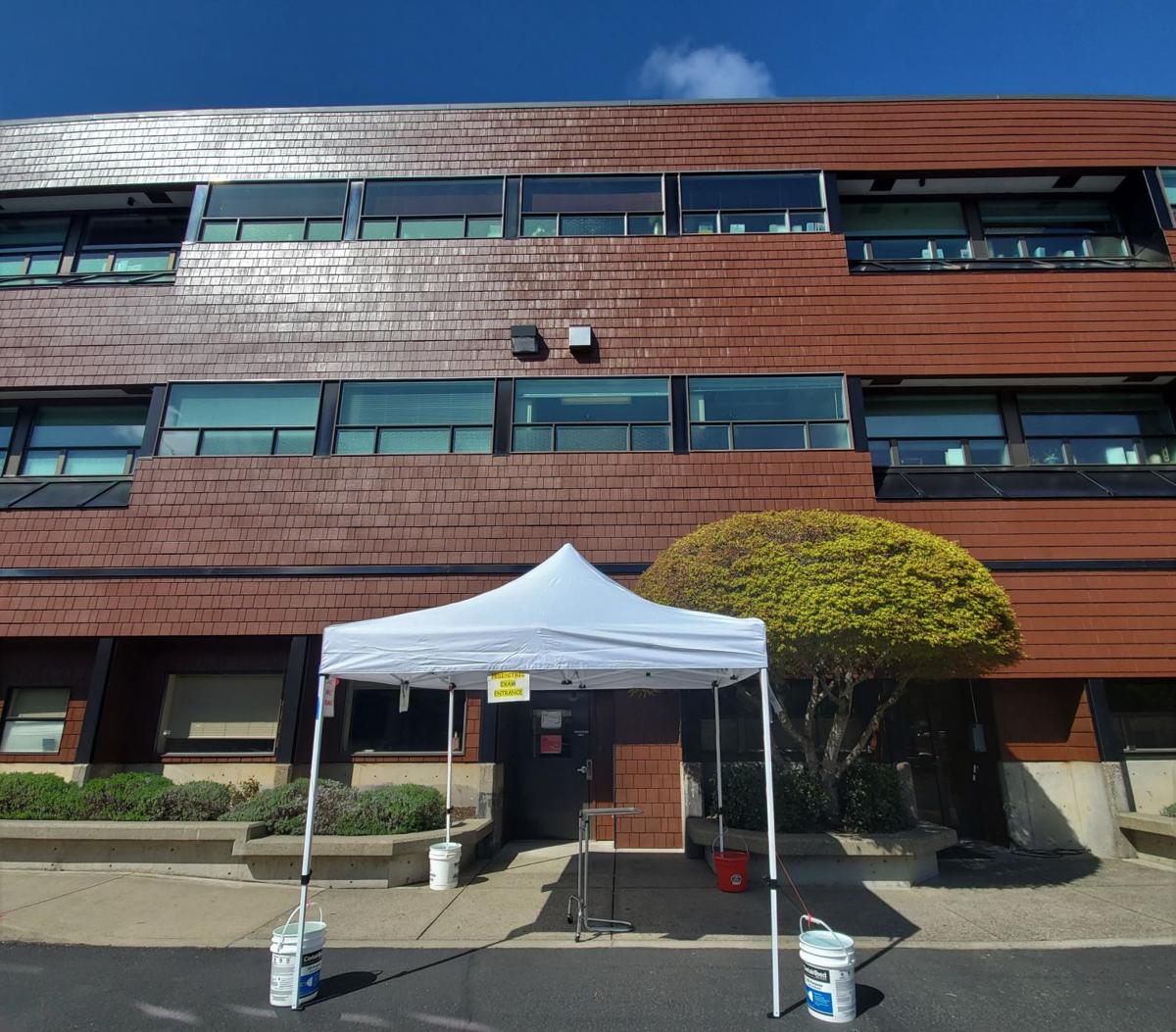 North Bend Medical Center conducted layoffs last month to do protect its staff, preserve medical personnel for the oncoming pandemic, and to save its personal protective equipment.

The North Bend Medical Center has set up a tent for patients who need lab work done, as well as a tent for COVID-19. Both tents are accessed externally rather than through the building.

North Bend Medical Center conducted layoffs last month to do protect its staff, preserve medical personnel for the oncoming pandemic, and to save its personal protective equipment.

COOS COUNTY — Over 100 employees are temporarily laid off at North Bend Medical Center.

“It is a lonely place,” Dr. Kent Sharman described of the clinic now. “It feels like Saturday morning ...”

These measures were taken to prepare for the novel coronavirus pandemic that is sweeping across the state. Though there are no positive cases of COVID-19 in Coos County for now, North Bend Medical Center is making steps to be ready when it hits.

“We were reading the tea leaves on how this pandemic was shaping up, not only locally and around the country but around the world,” said Jon Winders, chief operating officer for the medical center. “South Korea stood out as the model for aggressive testing and aggressive action for social distancing and isolation. It was apparent that something like that was going to prevent the disease from spreading. We were putting our heads to that and caught wind from the governor’s office that she would put a mandatory stay-home order in place … That was a turning point for us in making this decision.”

The layoffs were announced almost two weeks ago. Even though the center is seeing loss in revenue from non-essential surgeries being canceled, Sharman says the layoffs had nothing to do with finances.

In fact, the medical center is still providing health insurance for the 130 employees who were let go.

“We had to make difficult decisions,” Sharman said. “It was made on three principles.”

The first: to protect the public, including the medical center’s own staff.

The second: to save personal protective equipment.

“If we had not done something like this, we would have burned through all of our PPE,” Sharman explained. “… The N95 masks are in the dozens. Gloves and surgical masks are a non-issue right now.”

Winders added that a daily update is reported on PPE numbers, which he described as fluid.

The third principle behind the layoffs: to preserve local healthcare workers for the anticipated time when they are needed most.

“We’d love to bring folks back,” he said. “…We have no idea how long (the pandemic) will last.”

For Sharman, the decision to lay off employees was the most difficult decision the medical center faced “in a generation.”

“There were other times the economy was impacted, but the medical sector was relatively immune to that,” he said. “This is a national crisis and to make a decision to protect the health of any person who comes into our buildings from patients to employees and by extension their families. The decision was ultimately to protect our communities by preventing employees from becoming patients.”

In this regard, the medical center has also been forced to dramatically shift its work environment. This means a large part of the work is remote, from people working from home, taking phone calls, processing inbound documents and requests for medication to be filled.

“Our physicians are working from home,” Winders said. “We’ve switched to a telemedicine model now.”

In all of North Bend Medical Center’s clinics, from Myrtle Point to Bandon and down in Gold Beach, Sharman said business is still being done and patients are still being cared for. The medical center has made arrangements to still treat patients who need lab work done by setting up a tent that can be accessed from the outside behind the building. This is to decrease the risk of patient exposure.

“Our coagulation clinic for people on special medications that need monitoring have their own entrance,” Sharman said. “We do wellness visits for children 15 to 18 months for critical needs or immunizations. Other world pandemics … we want to keep those at bay.”

There is also now an isolated respiratory clinic. The medical center’s building engineers took a space that was being transitioned into a physical therapy office and established 12 isolation respiratory rooms. The medical center also has a direct COVID-19 line to answer the public’s questions. This line is open, for now, from 7 a.m. to 7 p.m. Monday through Friday but may soon be open 24-7.

“This is a once-in-a-lifetime, strange period we’re going through,” Winders said. “My dad was a World War II veteran and that impacted the whole world all at once. We haven’t seen anything to that scale before but now the whole world is involved. We’re forced to make decisions and develop new processes so quickly and it is remarkable how, as a community and organization, we pulled together to make a quick transition while maintaining the quality and level of service we normally do.”