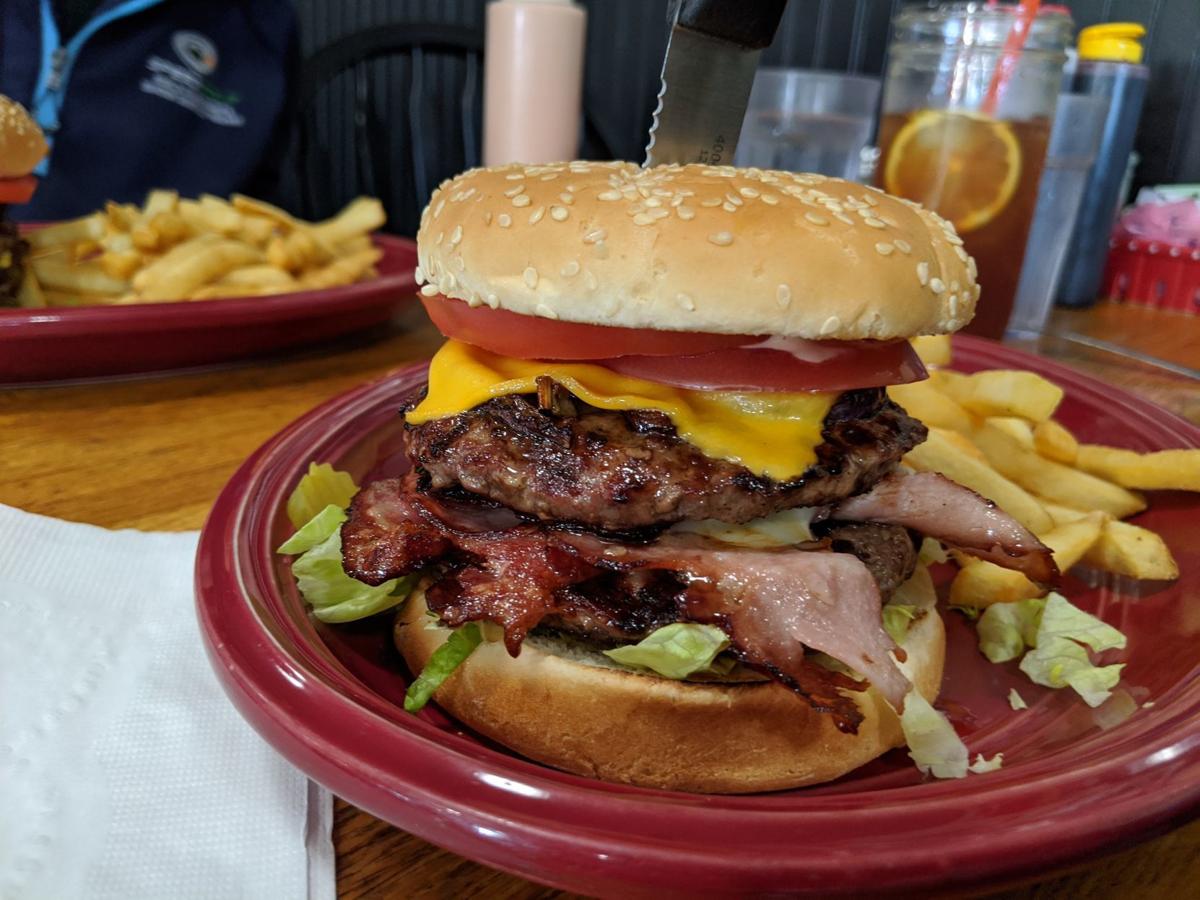 I order The Station Burger, which is two patties, a portion of ham, Swiss and American cheeses, grilled onions along with the normal veggies (pickles, onions, lettuce and tomato). 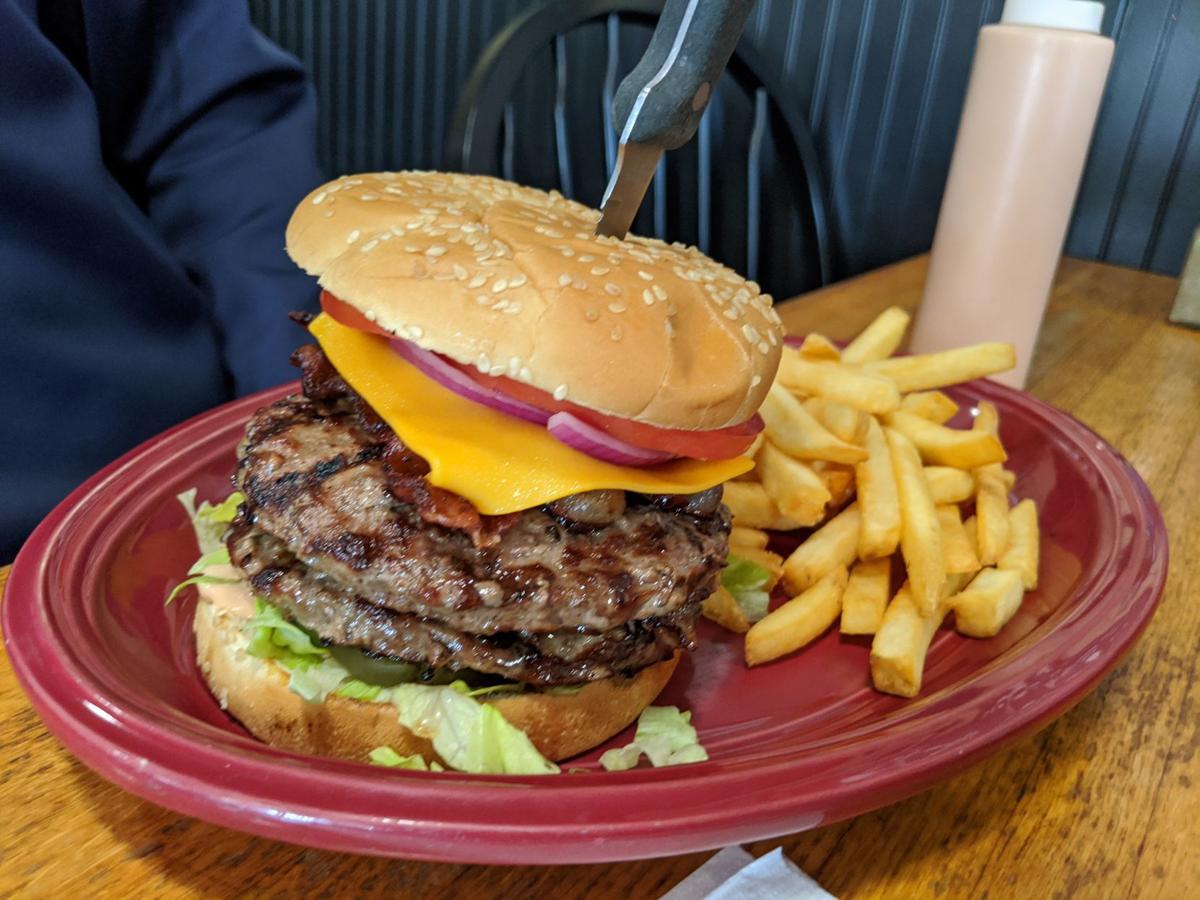 Sports editor John Gunther ordered The Rancher Burger, which is two steak-seasoned patties, double bacon and American cheese with all the usual veggies. 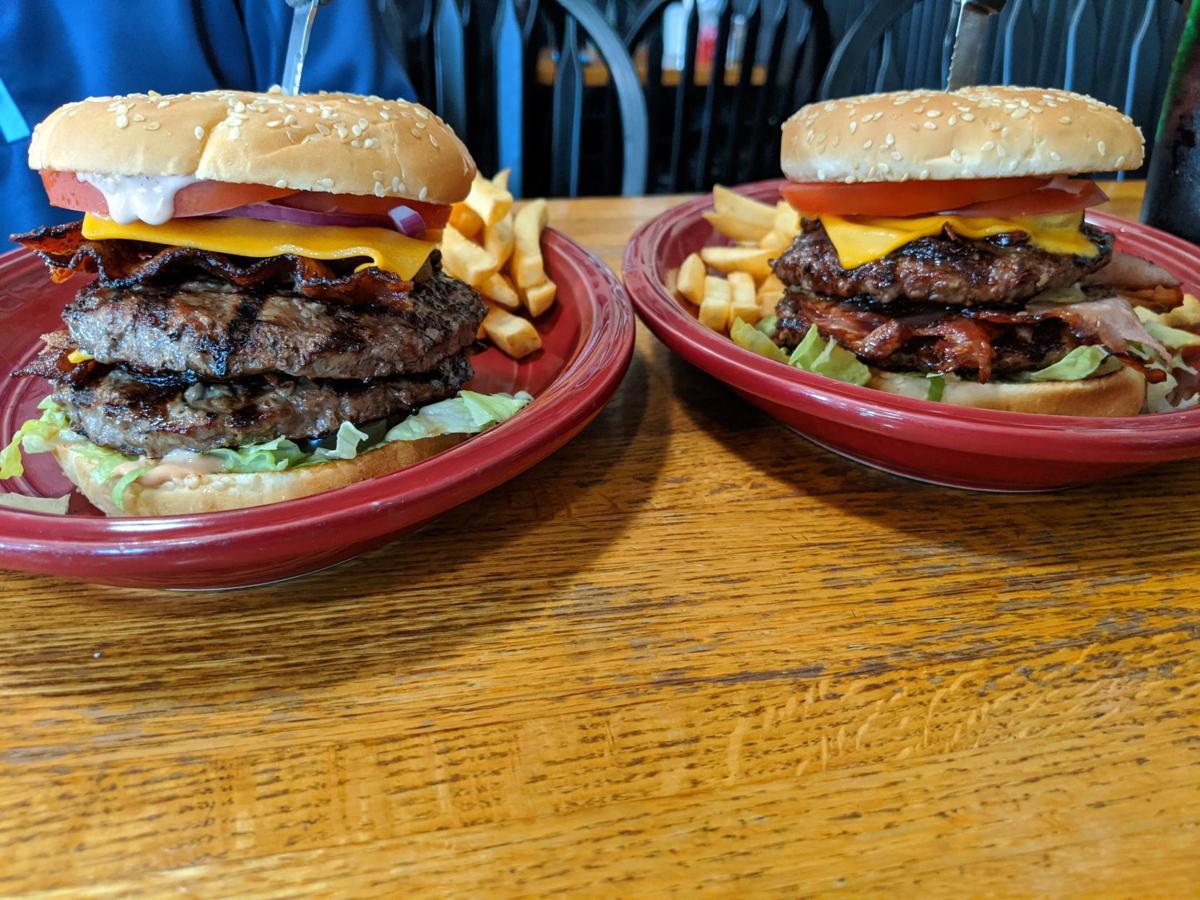 The Rancher Burger and The Station Burger, two of the larger burger selections at the Railroad Cafe in Myrtle Point. 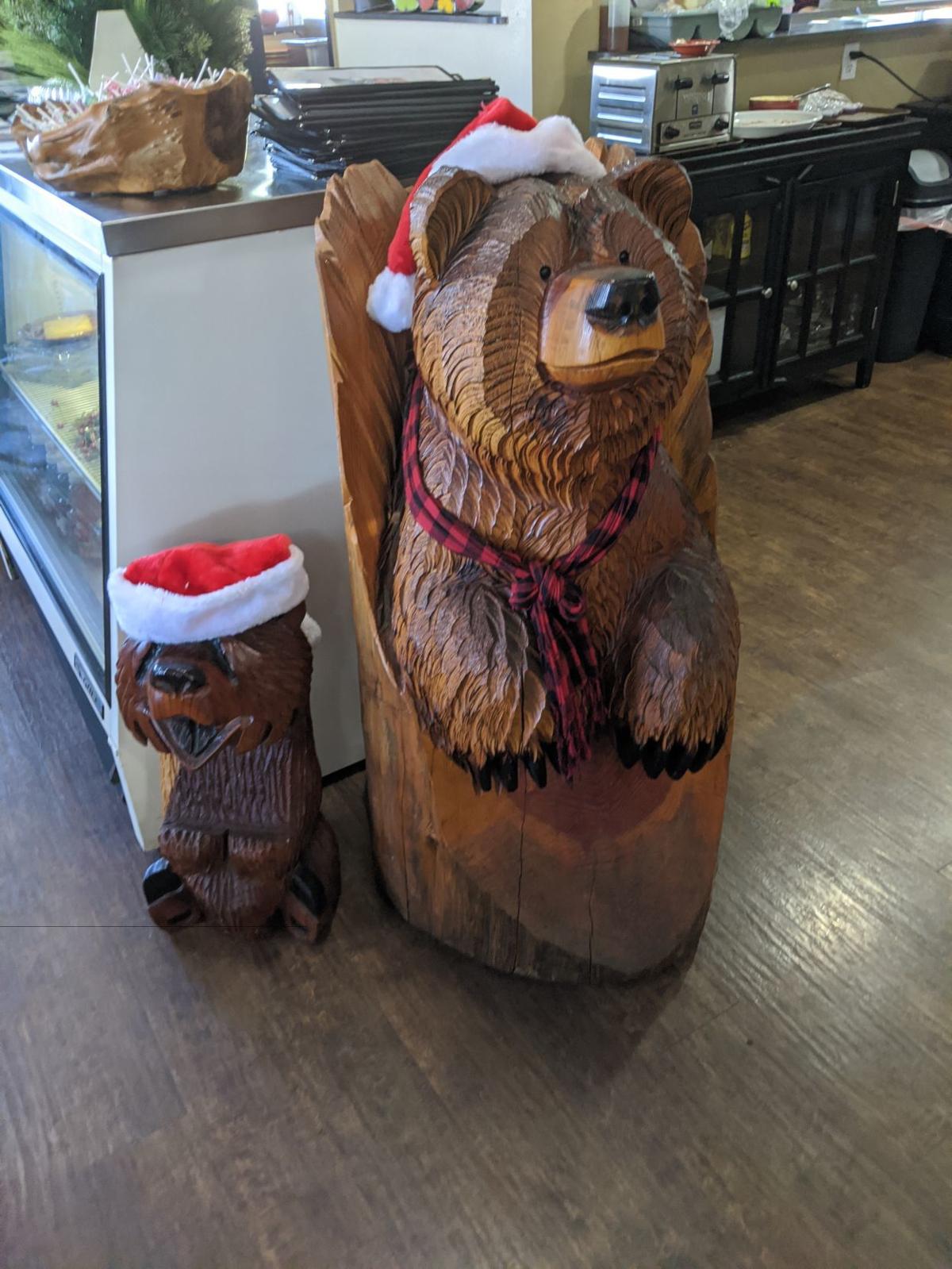 The Railroad Cafe in Myrtle Point is decked out for the holidays, including these two carved bears wearing their Christmas hats. 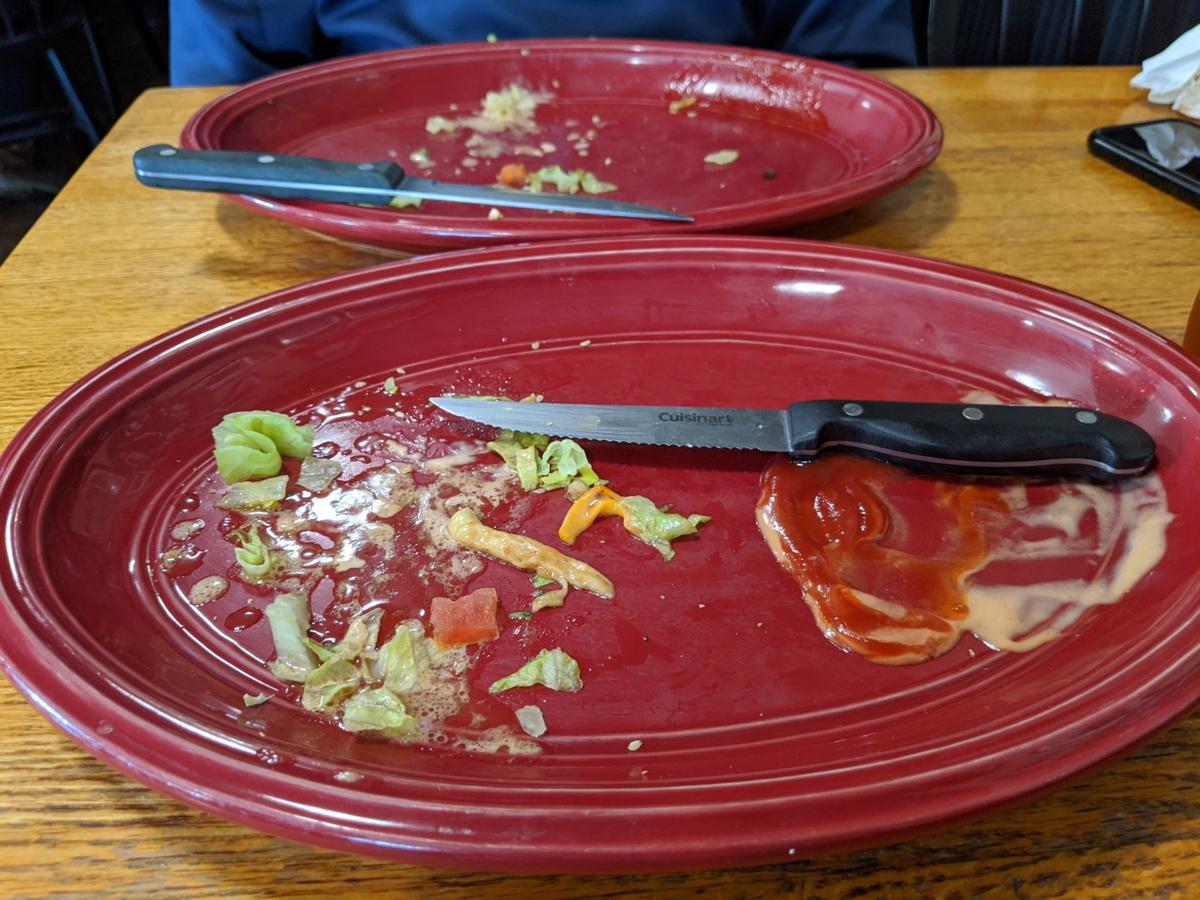 Nap time. After finishing those two huge burgers, it was time to hibernate.

MYRTLE POINT — We knew exactly what we were getting into.

Kinda like when you're in a train tunnel, and you see that light at the other end ... you know what's coming.

Sports editor John Gunther and I have been to Railroad Cafe before, and he even ordered one of their huge hamburgers that time, The Logger Burger.

The Railroad Cafe in Myrtle Point is decked out for the holidays, including these two carved bears wearing their Christmas hats.

So on our burger quest for the next few weeks, it just made sense to visit Railroad Cafe again.

But John had more sense than to order the same burger again. He's far too smart for that.

So instead of the burger with two patties, grilled ham, bacon, Swiss cheese and a fried egg, he got the one (The Rancher Burger) with two steak seasoned patties, double bacon and cheese.

Sports editor John Gunther ordered The Rancher Burger, which is two steak-seasoned patties, double bacon and American cheese with all the usua…

This one was big enough, that even with the steak knife stuck through it, it still did its best impression of the Leaning Tower of Pisa.

Mine wasn't any smaller. The Station Burger was two patties with a slab of ham, grilled onions with Swiss and American cheeses.

Yep. We knew what was coming and we still walked toward the light anyway.

I knew right away that this was one of those burgers that once you picked it up, you probably shouldn't put it down. I managed to accomplish that goal, while John had to tap out part of the way through to wipe off his hands and regrip.

Later, he'd marvel that I had only used one napkin.

"I never put down my burger, so I never had to use one on this hand until now," I told him.

I did lose part of a tomato slice about two-thirds of the way through, but it wasn't enough to get me to put the burger down.

railroad cafe side by side

The Rancher Burger and The Station Burger, two of the larger burger selections at the Railroad Cafe in Myrtle Point.

Not all the burgers at the Railroad Cafe are the behemoths that we ordered. They have a selection of single patty burgers that range from the basic hamburger to a chili burger, a mushroom Swiss burger, a patty melt and even a garden burger.

On the side, you can order any of the burgers with fries, chips or a garden salad. The single patty burgers are all priced between $7.95 and $9.75, with the big double patty burgers costing $12.50. So our meal with the two giant burgers, an iced tea and a Dr. Pepper ran us $29.

John is a big fan of the Railroad Cafe. After our initial trip there, he's been back and says that it may have his favorite breakfast on the coast, their Breakfast Club, which is three slices of sourdough, with Swiss and American cheese, bacon, sausage, ham, three scrambled eggs and served with hashed browns.

Nap time. After finishing those two huge burgers, it was time to hibernate.

For those of you not as familiar with Myrtle Point and feel like making the trip from the Coos Bay area, it's about half an hour out there from downtown. Take State Highway 42 and head east. When you get to Myrtle Point, the first stop light is Spruce Street. Take a left, and the restaurant is on the next corner on the right.

With burgers that size, you always wonder how, or if, you're going to be able to finish. We did.

Billy Smoothboars: Burgers galore and ready for the holidays

Whenever you hear of an event in Bandon, especially a charitable event, you almost always find Billy Smoothboars' owners Dan and Lynn Barnett among those donating. And sometimes they even host these events. One of them is coming up soon.