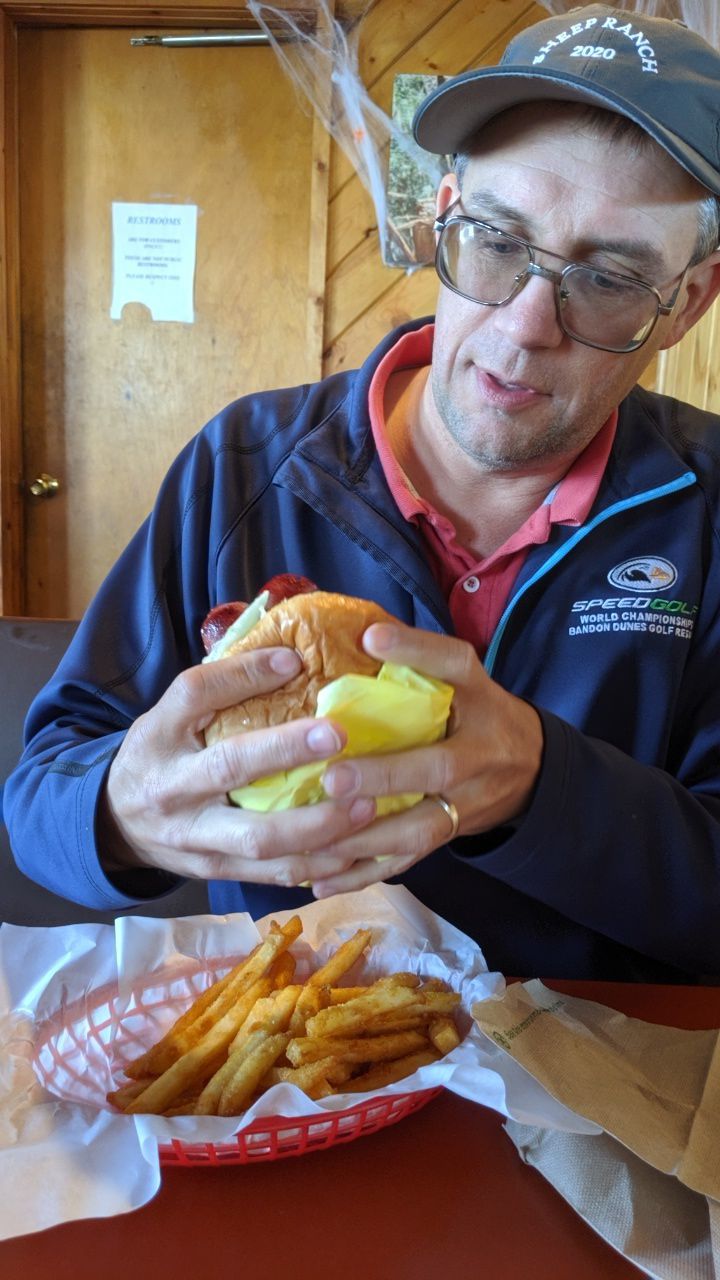 Sports editor John Gunther surmises that the best way to go after the Bruiser Burger at Praus Haus Bay Burger Inn is "to go straight at it." 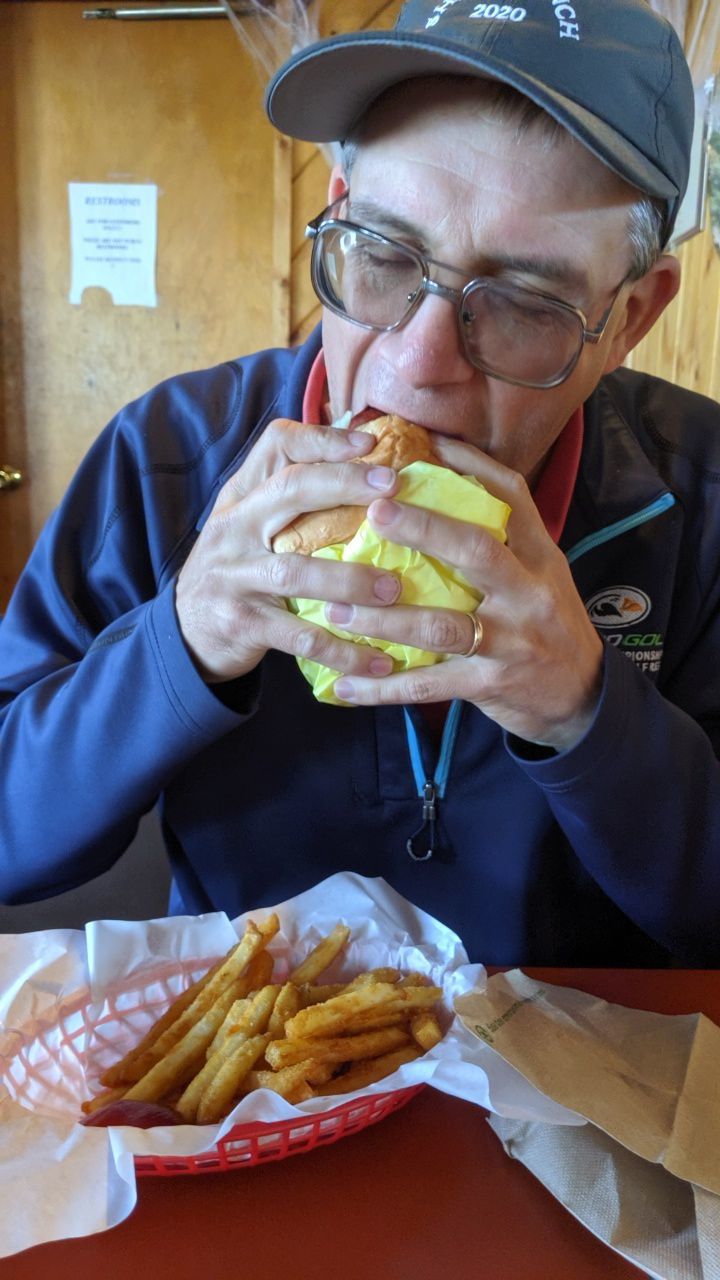 The first bite is the toughest as sports editor John Gunther takes on the Bruiser Burger at Praus Haus on Monday. This burger is definitely two hands full. 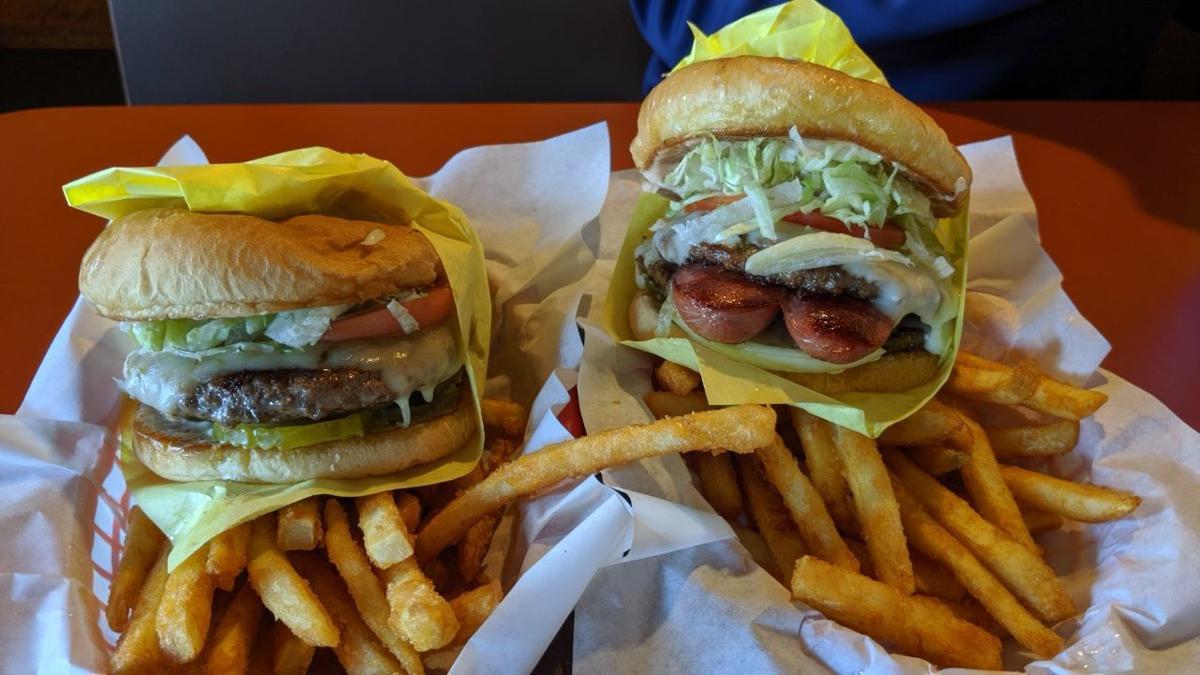 The elk burger (left) at Praus Haus is no small burger, until you put it next to the Bruiser Burger. 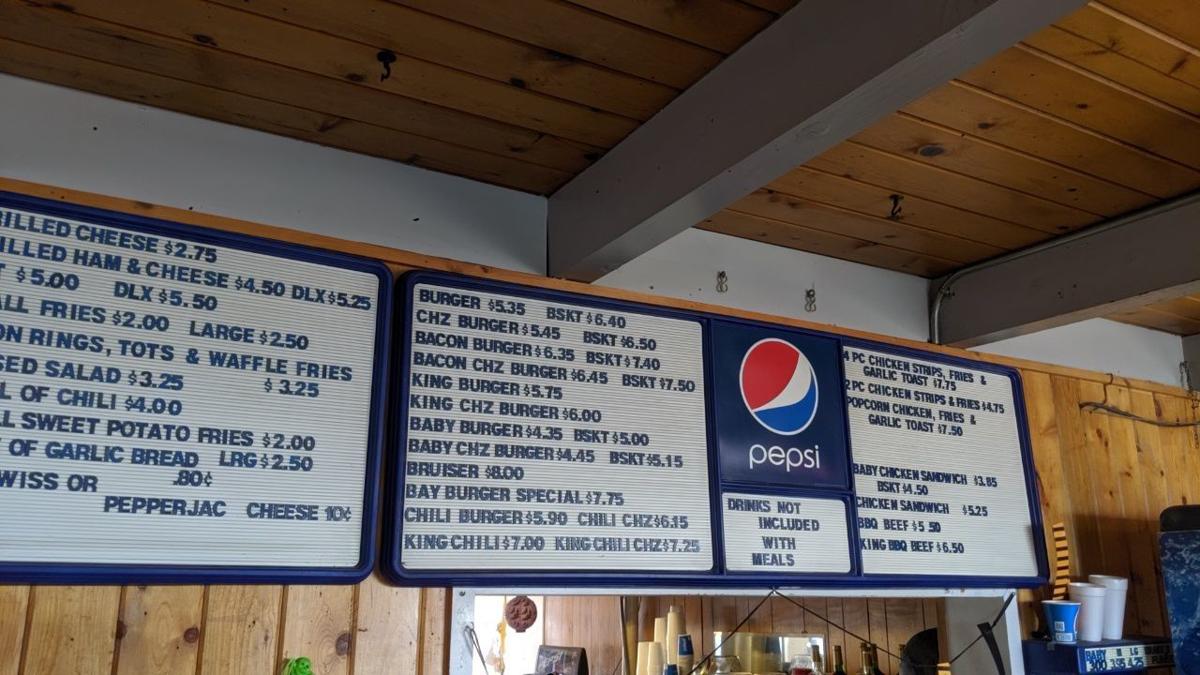 Praus Haus has a wide selection of burgers on its extensive menu.

COOS BAY — Half the fun of doing a burger series like this is watching sports editor John Gunther when they bring out his order.

Such was the case again Monday when we found ourselves at Praus Haus Bay Burger Inn.

John giggled when he looked at the menu and saw the description of the Bruiser Burger on the menu. He wasn't giggling nearly so much when I told him I was making him order that one.

Praus Haus has a wide selection of burgers on its extensive menu.

The Bruiser is two patties with cheese and all the normal veggies (pickle, onion, tomato and lettuce), then there's the choice of extra meat — hot dog, ham or bacon.

John asked what most people order, and our server said that the usual choices are the hot dog or the bacon.

John said he'd never had a hot dog on a hamburger, so that was his choice.

The photos above capture his dilemma.

"With something like this, it's best just to go straight at it," John said, having got some of the hot dog and burger patty with his first bite.

Praus Haus is John's kind of place. He really likes a good ratio of veggies to meat on his burgers, and Praus Haus doesn't skimp on the veggies. The bottom bun starts with pickles and slices of onion, then the meats and cheeses followed by slices of tomato and shredded lettuce on top.

That makes something like the Bruiser a handful ... or two.

The first bite is the toughest as sports editor John Gunther takes on the Bruiser Burger at Praus Haus on Monday. This burger is definitely tw…

It also makes good photos to post of your friends trying to eat them. (There are benefits to being the one behind the camera and the one choosing the photos to run.)

John and I also have the standing "napkin count" portion of our meal. A lot of meals you can tell how much you enjoy them by the number of napkins you end up using during the meal.

I used several fewer napkins (2), but enjoyed my burger thoroughly. On the specials board on the counter, there was an elk burger and fries for $8.75. Just about anywhere I can try an elk burger, I do.

I added pepper jack cheese to my elk burger.

I've had the elk burger at Praus Haus before, and I have enjoyed it both times. I'm not sure what it is about elk, but I know that I enjoy it in a burger.

People online rave about the shakes at Praus Haus, but I'm not sure how one could possibly drink a shake after eating either of the burger baskets that we ordered.

The elk burger (left) at Praus Haus is no small burger, until you put it next to the Bruiser Burger.

If you worry about how much time you have on your lunch hour, Praus Haus prides itself on getting your food to you quickly.

Don't have time to sit down and eat, Praus Haus also has a drive-thru in back as well as substantially more parking than the few spaces out front.

Praus Haus is located at 1175 Newmark Ave. in Coos Bay, just a few doors west of the "Y" at Newmark and Ocean.

Friends Cafe: Just in time for the holiday