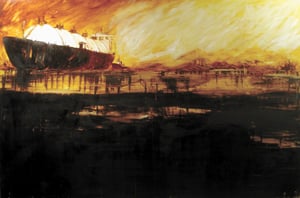 “Terminus” by Darren Orange of Astoria won an honorable mention in Expressions West 2011 at the Coos Art Museum. 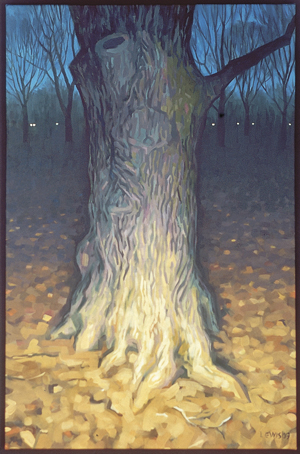 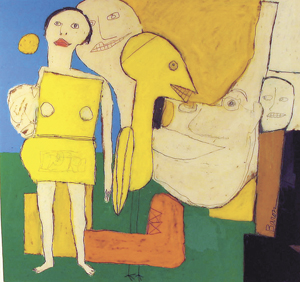 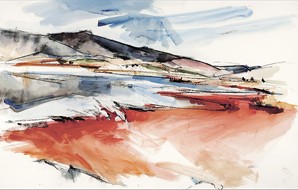 “Peppered Turkey” by Kristen Reitz-Green of Vashon, Wash., is part of Expressions West 2011. Contributed Art
1 of 5

“Terminus” by Darren Orange of Astoria won an honorable mention in Expressions West 2011 at the Coos Art Museum.

COOS BAY - It was love at first sight.

Shortly after moving to Portland in 2002, artist David Carmack Lewis took a walk from his house to a nearby store one night, passing through Columbia Park. There he saw a grove of 100-year-old linden trees.

He liked the trees so much that when his daughter was born in 2008, he named her Linden.

One of the trees in that park became the subject of a painting that won Lewis the top prize in Expressions West 2011, the Coos Art Museum's annual painting competition for artists in the western United States.

Juror Erik Sandgren had a harder time getting a handle on his feelings about the mysteriously lit "Linden Tree." While struggling to decide on a winner, he couldn't shake the image, he told the crowd at last week's opening reception.

"There's a certain mechanics of execution that wanted to put me off, but it just kept haunting me," he said.

‘Mystery of the ordinary'

Sandgren, an artist and professor in Aberdeen, Wash., elaborated on the selection in an email:

"It turns on a mystery of the ordinary created by contrasts of light and color of the large central form that blocks our distant vision. The horizon on either side is lost in darkness and shifted upward with a mysterious band of lights. It seems to implicate the viewer in a kind of search."

Lewis specializes in night scenes. Though he first saw the tree at night, the lighting in the painting is only vaguely reminiscent of what he saw on his walk, he said.

"I'm more interested in conveying a mood of the dark rather than depicting it at realism," he said.

"In this sense, each scene I paint is more of a backdrop for some imagined narrative or action rather than merely a scene."

Sandgren picked 15 of the exhibit's 63 works for special recognition, including five honorable mentions and seven entries of merit. Two others got cash prizes.

Baron is on a bit of a streak, having won third place in the same exhibit last year. The former publisher of The World declined an interview.

"I find it very exciting that very serious implications about family issues are suggested underneath the playful and deceptively simple forms - just like family," he wrote.

"Its apparent flatness contrasts the depth of insight here."

Velocity in the visual

Cole, a plein air painter, worked on her winner at a wildlife refuge in California across the border from Malin. Though the area is remote and solitary, it's hardly quiet, she said. Large flocks of geese and other birds make lots of noise.

"My painting addresses the vast space and energy of this area and my love for it," she said.

Sandgren said Cole brought "a velocity to visual experience that is really thrilling."

Among the honorable mentions, most notable is the prominently placed "Terminus" by Darren Orange of Astoria, depicting a disaster involving an LNG tanker. It suggests fire and oil without directly showing either, Sandgren said.

Realistic art, meanwhile, tends to be more popular with local viewers than it is with exhibit jurors. Among the pieces not singled out for recognition is "Peppered Turkey" by Kristen Reitz-Green of Vashon Island, Wash. The large closeup of a turkey sandwich looks real enough to eat.

The wide variety of approaches to painting made Sandgren's task difficult, he said, but all the more rewarding that the pieces "hang together" so well.

"I think this show could stand up anywhere," he said.

"It would be a contribution to the scenes in Portland or Seattle or San Francisco."