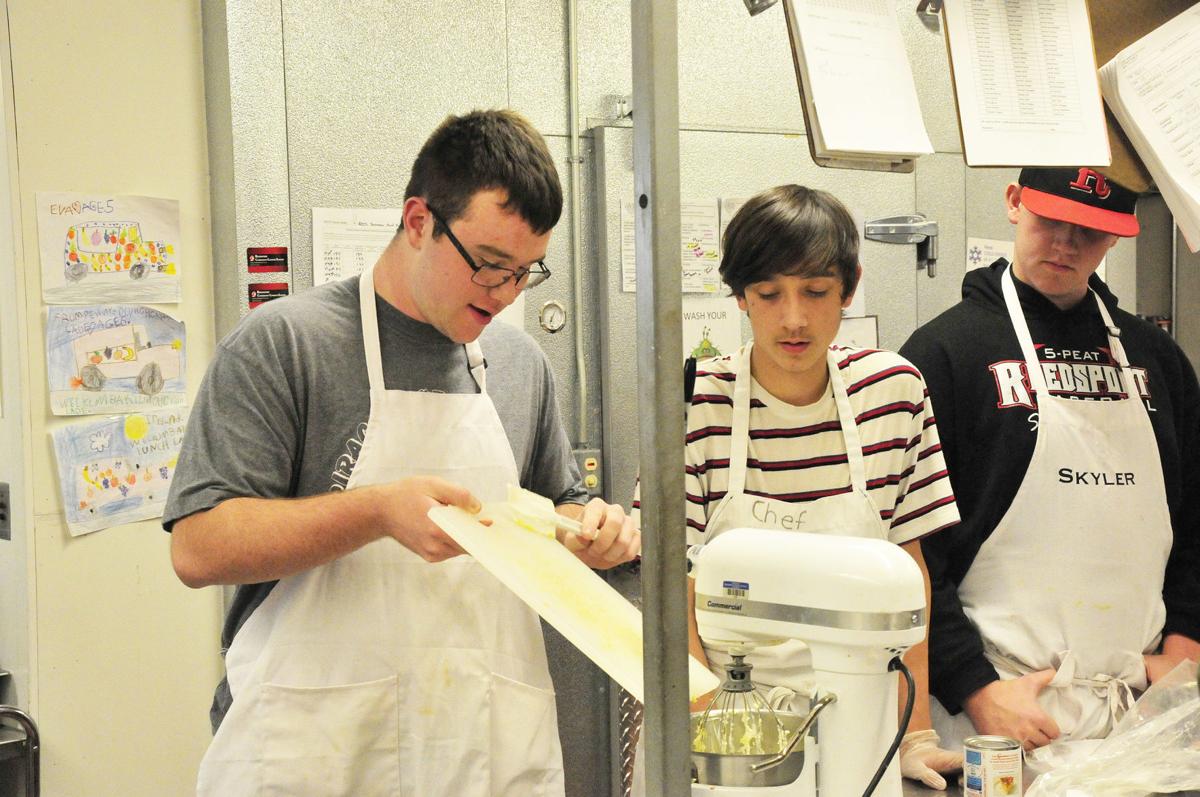 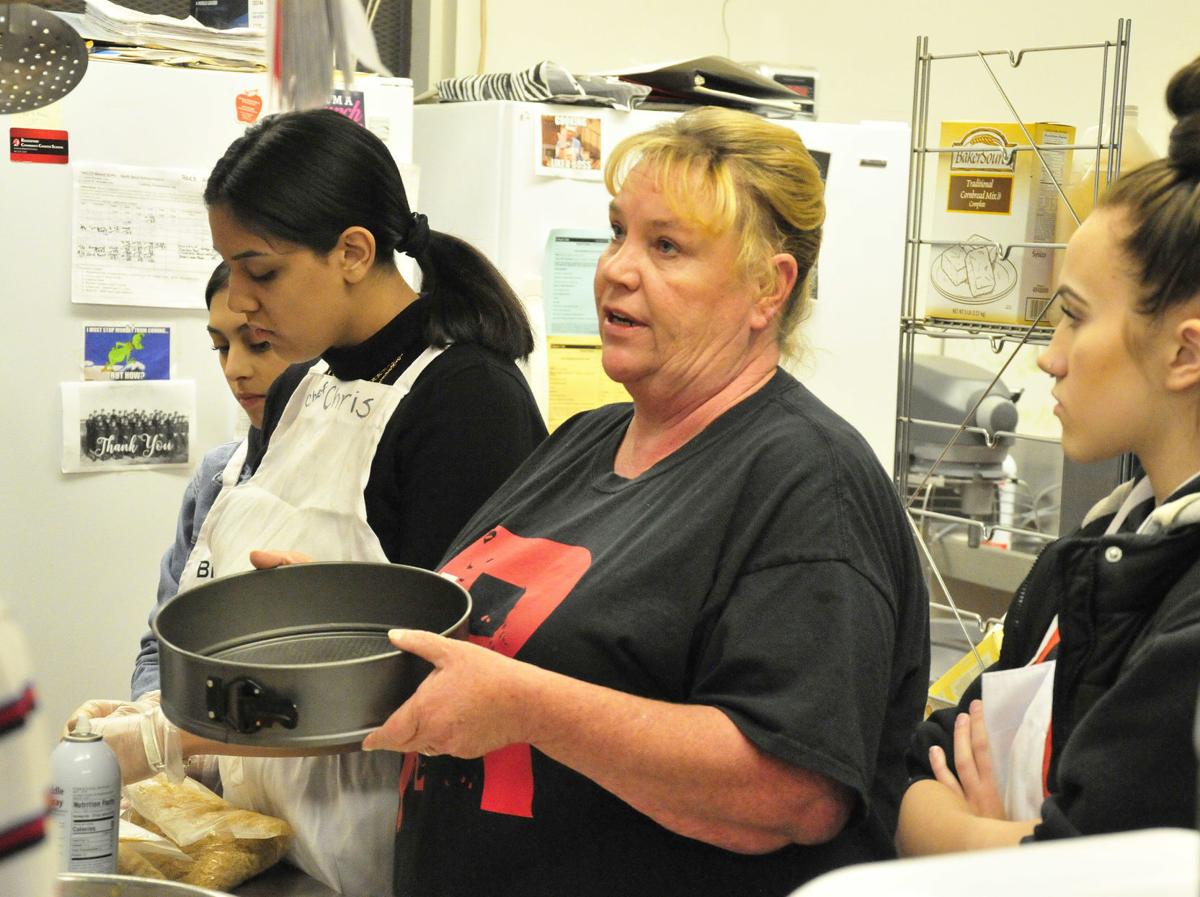 Laura Squglio tells her students about spring form pans that can be used for their cheesecakes during a culinary arts class. 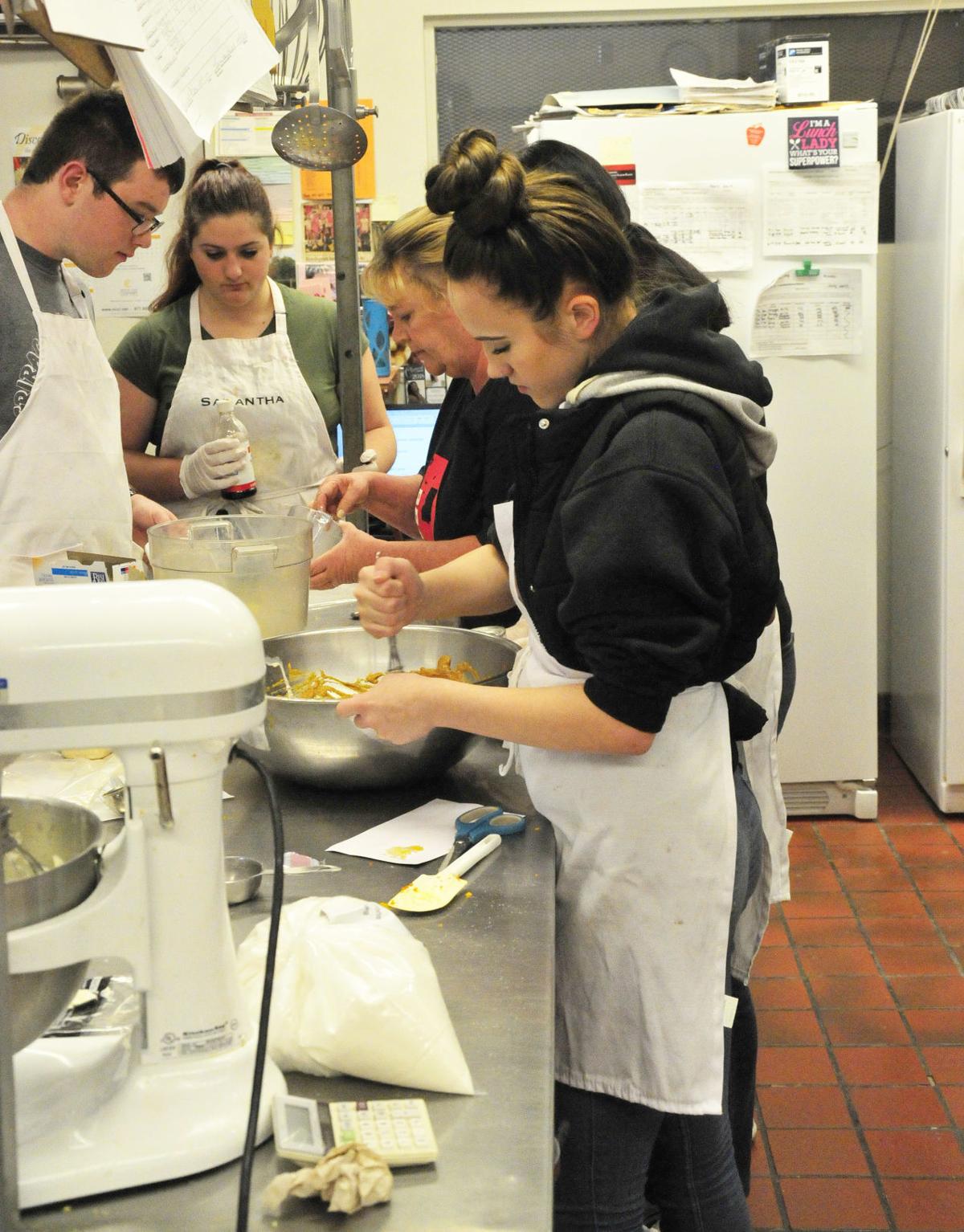 Cora Bruce mixes the pumpkin mixture for the class's cheesecakes as Jacob Dukovich and Samantha Klier work on other steps.

REEDSPORT — Food ties the world together, and its preparation touches on every aspect of life. During one of the classes at Reedsport Community Charter School, students are learning to cook while enhancing their other classes in ways that will help them wherever their path leads after graduation.

The RCCS Culinary Arts Program began eight years ago. Held in the school's kitchen and taught by Lunch Lady Laura Squglio, students find themselves learning in an environment they don't often get to see up close.

Laura Squglio tells her students about spring form pans that can be used for their cheesecakes during a culinary arts class.

In honor of Halloween, the program's recent classes have focused on cooking with pumpkin. Most recently, students learned to make pumpkin cheesecake, and before that they made pumpkin cinnamon rolls. During the lesson, Squglio lets the kids get hands on to do the work themselves while giving advice and instruction on proper steps. She also teaches them about food and the science behind cooking.

The program ties into the student's other lessons. The class addresses measurements, how to change amounts of an ingredient and reading comprehension, among other topics. They also learn to think on their feet and improvise. Squglio recalled there were times they found a recipe online that needed to be reworked, or something went wrong with an ingredient and they had to come up with a solution on the fly.

The class stays on a tight budget, with students learning about purchasing and portion control based on budget. Squglio said her class is funded by grants and student fundraising with some products being donated. She recalled the pumpkins used in recent classes, and apples used earlier in the semester, were donated by community members up Smith River. Much of what gets made in the class gets sold to the staff to help fundraise for the program.

"That's amazing," Squglio said of getting donations. "That's a huge expense, to do all these things that we're doing, that we'd have to pay out."

Through the rest of the year, Squglio teaches her students knife skills and food safety, among other lessons. The class also learns about how food interacts with the body, like with taste. At the start of the year, Squglio sat the class down in the cafeteria and had them identify different ingredients by their smell and taste alone. Another variation of this lesson will have them do a blind taste of a completed dish and identify what's in it.

Squglio said she starts the course, before they ever go into the kitchen, with teaching about food sanitation and safety. She said that if the students have those expectations from the start she can expect those standards every time they come in. As a result, it keeps everyone safe, and helps ensure nothing is amiss if the health inspector comes by. They also cover grease and oven fires — how they start and the proper way to respond to them — as well as how to respond to cuts and burns.

Cora Bruce mixes the pumpkin mixture for the class's cheesecakes as Jacob Dukovich and Samantha Klier work on other steps.

"That's the number one thing," Squglio said. "The earlier that they have those skills the better."

Squglio said her main objective is to give her students basic skills, like cracking an egg, measuring ingredients, cooking pasta and similar skills. She said these are things people take for granted today, in a world where the food being eaten and how it's prepared is very different than it was 50 years ago. She gave the example of spreading frosting — that it can be very frustrating if done improperly and lead to a messy cake, but when done well creates a beautiful finished product.

"It's basic skills that people kind of take for granted these days," she said. "That difference of having that little skill is huge."

Kiran and Lizbet, two students in Squglio's class, said they enjoy the program. Kiran said she was used to cooking foods in line with her cultural background, but in the culinary class she's learned to cook more American dishes. She said it was interesting learning to cook with different spices and styles. Lizbet agreed, saying it's fun learning to cook things they've never made before.

Kiran added that the lessons they're learning will be valuable after school. She noted that once they've graduated and are on their own, they need to know what they're doing with food and how to eat properly with what they have.

"I think it is important," she said. "Once you're out on your own, you don't want to be starving."

Lizbet agreed, adding that the skills they're learning are ones they can continue using throughout their life.

"You may think you know how to cook or to bake, then you come into this class and it's just a whole different perspective of what you didn't know or what you already knew," said Kiran. "It's important to know what you're making and what you're eating. You can't rely on nobody else once you're out on your own, you have to know what you're doing when it comes to food."

Both students find the class fun and engaging. They love Squglio's teaching style and how she approaches everything. Both said they would encourage their peers to take the culinary class if they have the opportunity.

Squglio recalled that what she wanted to be when she grew up, even more than being a cook, was a teacher. She loves teaching her class and being able to work with her students. If the students take anything away from the class, she said she hopes it's to "put a little lunch lady love in everything" they do. She recalled her own culinary arts experience in high school and that she learned things in the class, beyond just food, that she still uses to this day.

Muralist behind centennial mural completes another wall in Reedsport

As part of the year-long celebration of Reedsport's centennial, a large mural was painted in downtown to celebrate the city's history, and the artist behind it has already completed another painting in the Reedsport community.