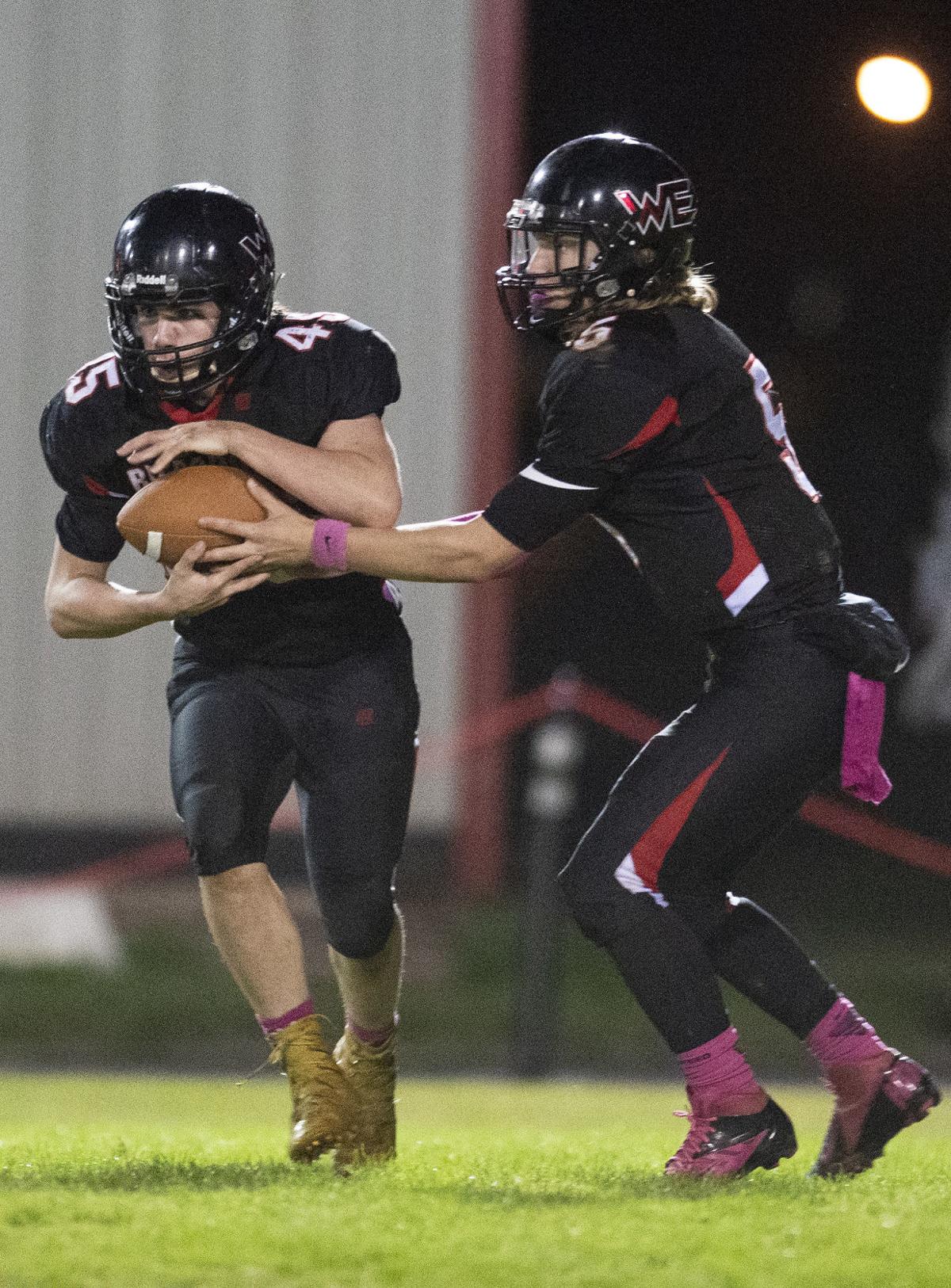 Reedsport quarterback Kaileb Pickett hands off Friday to Miguel Velazquez during a game against Gold Beach at Reedsport High School. 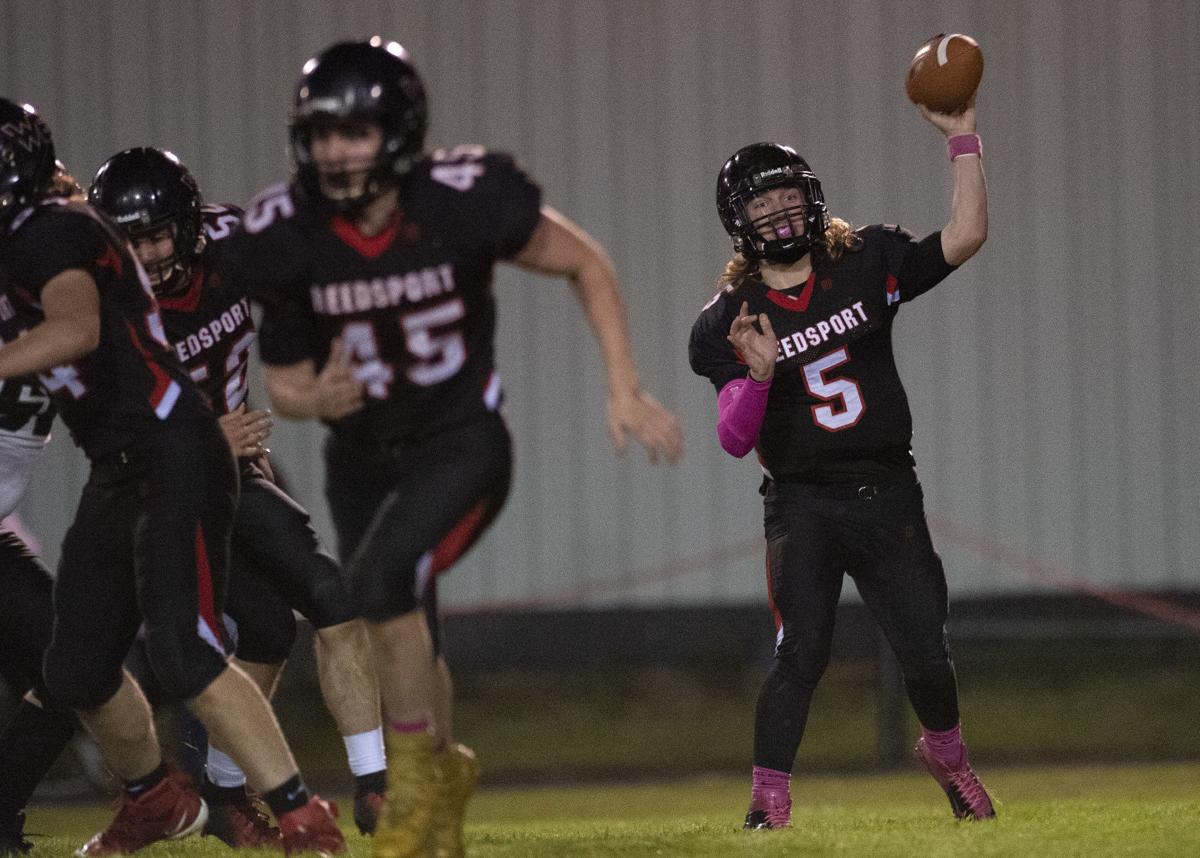 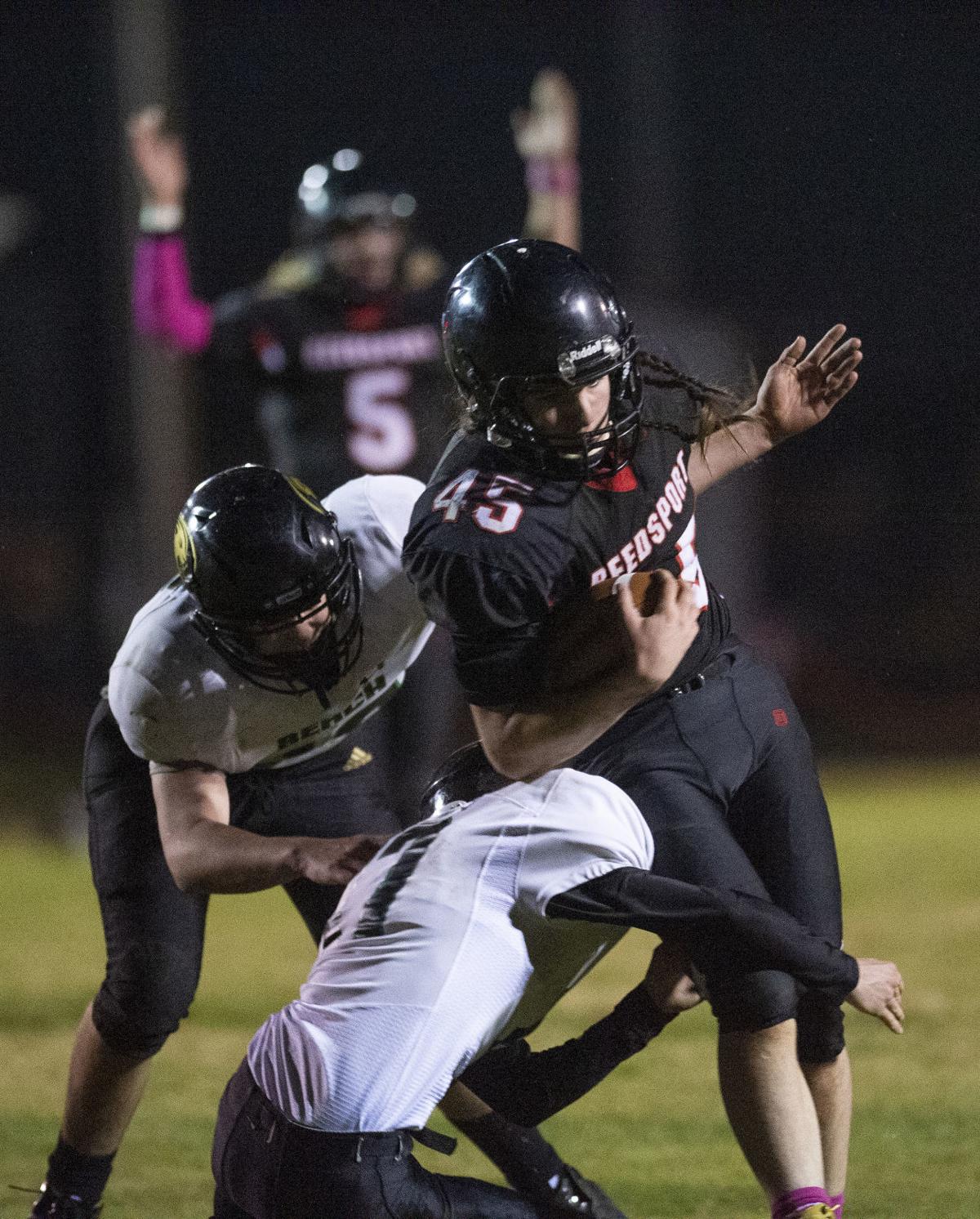 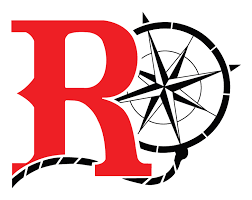 REEDSPORT — On a night when the Reedsport offense was pouring on the touchdowns, the Brave were just focused on avoiding the rain.

“We wanted to throw early because we thought the rain was going to come,” said Reedsport head coach Boe Pickett.

While the rainy weather held off until the conclusion of the game, Reedsport used a fast-striking pass attack and an equally potent run game to cruise past Gold Beach 56-14 at home on Friday night during the school's homecoming game.

Scoring on the first six offensive possessions, Reedsport’s offense offered a masterclass in efficiency. The Brave ran 22 fewer offensive plays than the Panthers on the night and had half the time of possession and were dominant across the board.

Through the air quarterback Kaileb Pickett was seven-for-eight with four touchdowns and 229 yards. On the ground the Brave rushed for 226 yards and three more scores in addition to successfully running in all seven two-point conversion attempts.

“They’re just kind of starting to mesh, I guess, and believe in themselves. And that’s the key with this group, when we believe we can, we can be really good,” said Boe Pickett.

Despite a 2-4 record coming into the game, Reedsport was ranked 13th thanks to the team’s strength of schedule. Three of Reedsport’s four losses have come to teams that entered the day ranked in the top six including top-ranked Toledo and second-ranked Coquille.

After four losses in the last five games, the Brave were ready to strike against winless Gold Beach. After a defensive stop on the opening possession of the game, Kaileb Pickett found a wide open Tyler Thornton cutting across the middle of the field for a 54-yard score.

The connection from Pickett to Thornton was a theme of the game as Thornton finished with five catches for three touchdowns and 196 yards. Pickett found Thornton, again, wide open at the end of the half for a 46-yard score and again in the third quarter on a one-play 73-yard strike.

“We just threw fades and screens and all that to him and it worked every time,” said Kaileb Pickett. “I feel like (Thornton) is one of our best wide receivers out there, like slot and all that. Just his hands and ability to get open and run routes correctly is key to that.”

Averaging over 7 yards per rush attempt, Reedsport was also successful in the ground game. Miguel Velazquez led the running back by committee approach with 10 carries for 79 yards and a touchdown. Pickett ended with 35 yards, Alex Carson 31 and Thornton 22 and a rushing touchdown, but the surprise of the night came from Jacob Chaney.

Chaney, who was seen on the offensive and defensive lines throughout the first three quarters, was the feature back on the final Reedsport possession. Taking the snaps — and huffing and puffing between each play — Chaney put together five carries for 62 yards and a touchdown.

“Chaney jokes around that he wants to run the ball and this and that and so we said that we were going to call that our linemen appreciation formation,” said Boe Pickett. “I thought it was pretty special for him to run the ball.”

Defensively, Reedsport held Gold Beach in check. Using their run-up-the-middle-as-much-as-possible approach, the Panthers found success in the second quarter with a pair of touchdowns. Landen Timeus had 118 yards and two touchdowns on 28 carries for Gold Beach.

“We told them that was what was going to happen. They run the veer and ... it’s an offense that is just going to lull you to sleep and then there’s going to be a big play and we had to limit the big plays,” said Boe Pickett.

Gold Beach had one play of over 20 yards and finished with 37 passing yards.

With two games left in the regular season, Reedsport travels to Bandon (3-4) — a team that just defeated Toledo — next week for the last league game of the year. Then to finish out the year the Brave host Rogue River (3-4) on Nov. 1.

“We have the ability to win out and possibly have a playoff seed,” said Boe Pickett. “We’re down to 18 kids after starting the year with 34 and they are the ones that want to be here and they want to play. People are stepping up and they’re doing a great job.”